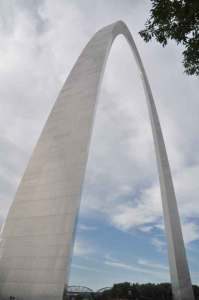 Spread the love
**Sorry this is wordy/picture heavy but St. Louis is COOL!
More so than I ever thought!!!  Please read…**

When we woke up Sunday morning we were a bit on the lazy side but decided we should get up and head to the Arch before everyone beat us there and we were there all day waiting to go up.  We got there around 9:30 or so.  When you enter the park there are gorgeous views.

And then you get to the main attraction.  They say this is in the area that Louis and Clark crossed the Mississippi River into the St. Louis Area, although remember this wasn’t St. Louis as we know it today :).  This is the Gateway to the West.

To enter the Arch, you have to go through security, you know empty your pockets, put your purse on a conveyor belt, etc.  By the time we got through and got up to purchase our tickets, we were there at 10:03.  Our ticket time was 11:20 so we had a little over an hour to kill.  They start lining you up for your time to enter about 10 minutes before your departure time.

While you are there, there is a fabulous museum that educates you on the Wild Wild West.  This is a paddlewheel to steer one of the ships that went up and down the Mississippi.  I stand 5’7″ tall so you can see how tall that wheel is.  While hubby was taking this photo, people were staring at me.  See what I do for my bloggy… lol.  Nah, even if I didn’t have a blog, I’d still have taken a photo like this.  That’s just me :).

I was in love with old-time cameras.  Side note, do you know why during the turn of the century (not 2000 either) the women stood and men sat for photos?  Because it took so long to get the photo that the woman had an apparatus holding her up in one place for so long so she didn’t move and her dress would hide it vs the man’s pants.  That’s also why they didn’t smile.  Not sure if this is one of those types of cameras or not though… just knowledge I know :).

Here is a wall that describes all about the idea behind the Arch, the realization of the Arch and the actual architect.  Now, I have been in the Arch once before but this time I guess I paid more attention (vs being a 17 year old) and I was quite surprised that the Arch wasn’t built until 1963.  It would have been earlier as the plans were started in the early ’40s, however, World War 2 struck and plans got put on hold.  The monument opened to the public in 1967.  Another interesting piece of history is the designer Eero Saarinen died in 1961 so he never actually got to see his design started or finished.

Once they start lining you up for your time to enter the Arch, they give you a color/number so you know which capsule you’ll enter when they call you.

Each capsule holds 5 people.  One of the first things they ask you is do you have trouble navigating stairs (probably about 30ish when it’s all said and done if that) and they ask if you’re claustrophobic because these capsules are extremely small.

Then you’re up in the Arch finally :).    This is the view out the West side of the Arch.

This is a panoramic view out the East side of the arch, a view of the Helicopter landing/take off-site and a bridge crossing the Mississippi River.

This shows the size of the window you have to see out of the top of the Arch.  And another fun piece of information is on a breezy day, the Arch will sway with the wind.  It was made that way to help withstand Missouri style winds.

At the top of the Arch, you are 640 feet above the ground.  Now another fun fact is no building in St. Louis will be taller than the Arch, even if some look that way.

After we left the Arch, we walked like 2 blocks down to Laclede’s Landing.

Which is where we found The Old Spaghetti Factory for lunch.

So after lunch, we decided to wander over to one of the casinos because that’s where the trolly that tours St. Louis leaves from.  Ok, so I LOVE history so here’s another cool thing… In Missouri it is illegal to have casino’s, however, you can have riverboats that are casinos.  Now this building behind me is a Casino.  You may be scratching your head because didn’t I just say it is illegal to have a building in MO that is gambling.  Oh get this…. a lawyer found a loophole and this building is considered a boat on the river.  Say what?  Yup, because they brought pipes in from the Mississippi and ran them under the building, therefore the building is set on the Mississippi River.

Oh and we tried to have a fashion show of my outfit.  I’m pretty sure everyone was looking at us but whatever.

Why yes, I can hitchhike with my big toes.

And roll my tongue.

And finally, the trolly bus showed up.  Now a lot of big cities (Chicago, NYC as examples) have the hop-on, hop-off bus, however in St. Louis, instead of being built up, it was built out, so this trolly runs 27 miles showing off St. Louis so once you’re on, you are on for about an hour and a half.

This bridge was the monumental site for St. Louis before the Arch was built.  When it was built, they couldn’t get people to go out on it because they didn’t feel it was safe.  They finally convinced people that it would hold by walking an Elephant out on the bridge.  At the time, the Elephant was thought to be a brilliant animal and wouldn’t have walked out on it if it was unsafe.  Then, the road that we’re driving on (you can’t see it in this pic) spends about 6 weeks underwater every spring when the Mississippi River floods.  So the Trolly sometimes has to change its route because of flooding.

This is in Forest Park.  Now a lot of people have heard of Central Park in NYC which is 840 acres in size.  Forest Park in St. Louis is 1,371 acres in size, so considerably bigger than Central Park.  This park was the site of the 1904 World’s Fair where Waffle Cones were introduced/invented as well as at the same time the site of the 1904 Olympics.  And something funny there, the gold medalist of the marathon cheated by getting in a vehicle around the 9th mile and riding to the 19th mile.

Oh and this is the house hubby and I are going to buy and move too… lol, just kidding but how gorgeous is it?  And yes, it is for sale.

A view of the arch from the trolly.

After we were finished with the tour we went back to the hotel and chilled for a bit, then decided to walk to Union Station to check it out.  There are lots of parks in St. Louis and people are encouraged to walk in the grass, play in the fountains and just enjoy the park.  We saw this cool old fire engine that had been converted into an ice cream/drink/etc station while walking through one of the parks.

Union Station was a Passenger Train terminal and one of the largest in the country because remember St. Louis is the gateway to the west.  In the 80’s it was turned into a hotel, entertainment, and shopping center.

On our walk back to the hotel, we were debating where to grab dinner when we found Caleco’s.  Hubby was a bit tired of Italian since we had it for lunch, but we went there anyway to check it out.

This was just day 1…

p.s. Have you checked out the Giveaway??  Don’t forget!!