When I was a little kid, hauling hay meant going out to our pasture and loading it up or right across the road to the neighbor’s pasture that dad baled.  But we sold that place and on my parents new place, we mainly just do round bales.

That doesn’t take much physical exertion… basically get a tractor with a front end loader, load it on the “round bale trailer” (such technical phrases right) and haul it.  Now in our case, our round bale trailer, pull a pin, move the bar and the hay dumps off the other side.  (Go here and scroll down, you’ll see my friend Janet and her husband have a trailer similar to ours.)  Easy as that.  But square bales…well they are a little more physically demanding.

It always depends on how many my dad has helping him.  If he has 3 helpers, I’m usually the “stacker”.  My mom usually drives and PC & my dad throw the bales up to me.  But I’ve been the driver more times than not, in fact I learned to drive at 4 years old sitting on my dad’s hard hat so I could see over the steering wheel.  I’ve been the bale bucker (aka throwing up to the stacker).

You know, apparently you have to stick your tongue out to pick up the bale… 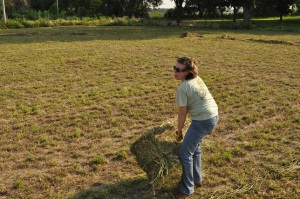 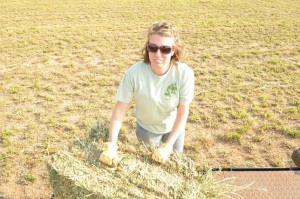 You always hate when a bale breaks open in the field like that too.
And look at all those bales to pick up.  Luckily we didn’t have to pick them all up but we have before.
I’ll never forget the time my mom came home from work.  She worked at a bank at the time so heels and dress was the dress code.  It looked like it was going to pour and my mom was the first home so she fired up the tractor and was baling hay in her work clothes.  Once my dad’s hay crew showed up Jay relieved my mom so she could go to the house and change clothes.  That was the coolest day though b/c farmers from all around stopped and started loading hay onto their trucks and taking it to my dad’s barn.  Not one bale got wet!  We probably had 6-8 people stop and start helping load hay.  It was awesome! 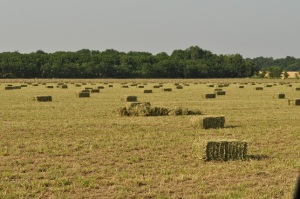 This time I was the driver.  My mom was on her way to Chicago this time (for work).  PC was the stacker and dad threw the bales up.

This is seriously all the faster you want to run.  Since I’ve been driving a hay truck since I was 4, I’m the best.. haha.  My mom sometimes gets a “lead foot” and has been known to throw me off the hay trailer before (when I start getting to the end) b/c she slams on the break.  I learned you ease into your breaks so you don’t dump the hay load (driver knocks them off, driver re-stacks) or throw the hay crew around 🙂

I was a little bored and having fun with the camera 🙂 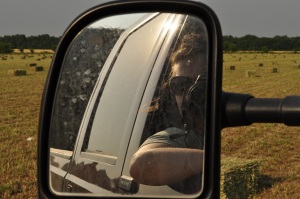 Then the best thing is to tie the load off (so you don’t dump it going down the road.  Trust me, that sucks! 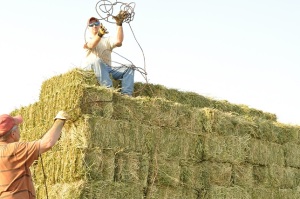 He gets down more gracefully than I do.  I usually wind up with hay in my pants… don’t ask.

Then it’s time to make the trek home.

Once home, you put 2 bales on the ground. 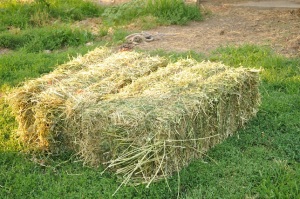 bring the elevator out of the loft.

Neither end of bringing that thing down is fun… It’s heavy.  If you are lowering it down, there is so much hay chafe on the floor your feet slide but on the receiving end, the motor side isn’t light. 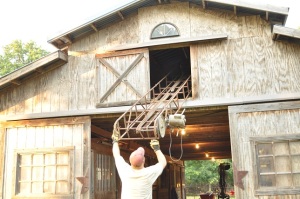 Place it on the bales.  Plug’er in and you’re ready to go. 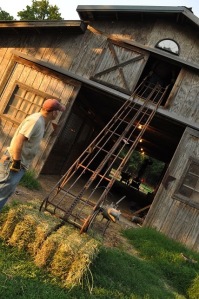 Then you have a “feeder” and a “receiver”.  If you are in the loft you are the receiver and truthfully have the hardest job… there is no breeze up there and it’s dusty. 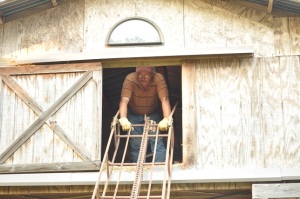 So you grab a bale from the trailer.

Place it on the belt.

And away she goes.

The receiver receives and stacks the bales. 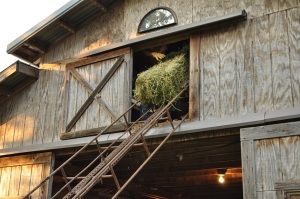 I got stuck on the receiving end this time.  Usually I’m the feeder.  I like being the feeder!

0 thoughts on “Get Your Muscle On!”