{one}  It’s raining this morning.  It started pouring as I got in my car to come to work and wouldn’t you know all my umbrellas were in the trunk once I got to work…

{two}  My feet are still cold too!

{three}  I think I hurt my back cutting wood this weekend.  My back has been hurting so bad! 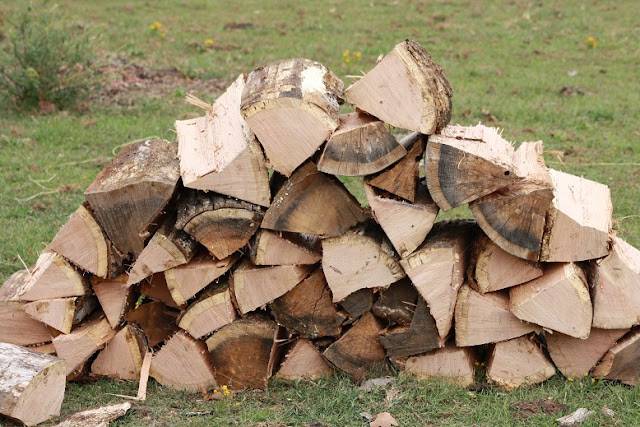 {four}  I think the buffalo wanted to help…. 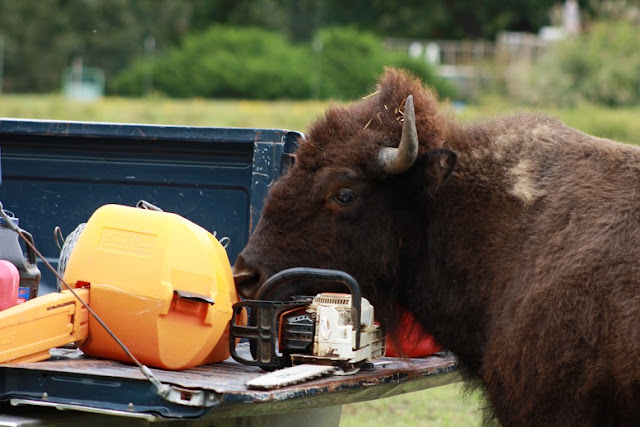 {five}  My husband is having surgery on Thursday on his leg, that’s why we made sure we had enough wood cut… I like wood heat.  It’s nice and cozy! 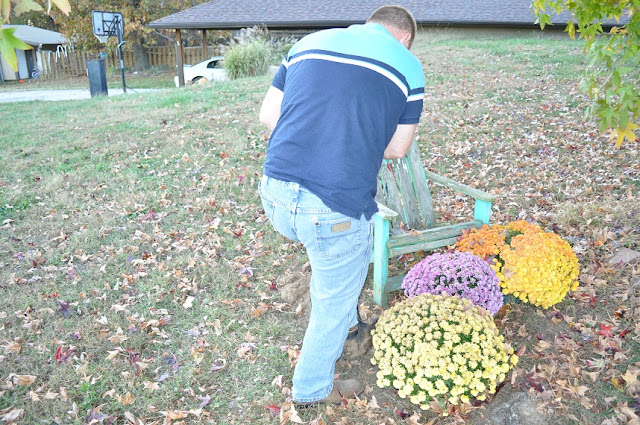 {seven}  Everyone needs a babysitter Horse.  This is ours.  Her name is Aloha.  The story behind her, on my parents 25th wedding anniversary my mom wanted my dad to take her to Hawaii.  My dad wanted a horse to take to the NCHA Futurity.  Dad found a horse, mom bought her for him and then said she was going to have her registered name changed to “Cheaper than Hawaii” but they never did.  Her barn name is Aloha though.  [A babysitter horse keeps kids safe.] {eight} And this girl LOVES to ride horses! 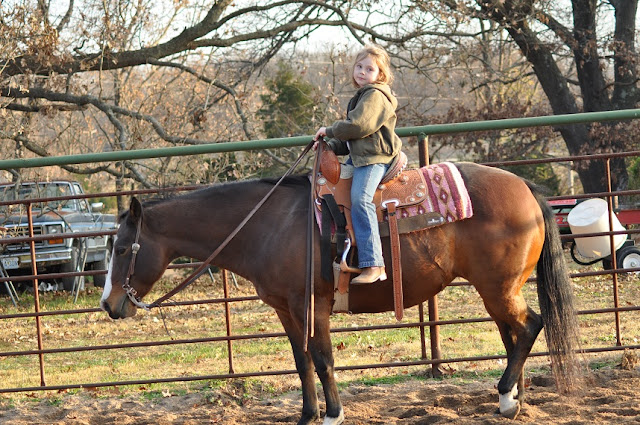 {nine} Sunday we made sure she got the chance to ride.

{ten}  I was reading The Survival Guide for the Young, Fabulous & Newlywed and she was talking about how she and her husband were closing out their bank account at a bank.  They allowed her to close it without his signature/approval.  The next day I went to the bank and closed out one of my own accounts (I was upset with that bank and already had a new account at another bank) and they asked for my acct number.  I didn’t know it.  She asked me for my social.  I rattled it off.  She then proceeded to give me all my money.  Never once asked for ID to prove I was who I was.  I’m not sure I knew who she was, however my dad said she knew me…..

{eleven}  I went to the new bank to deposit my money and they ID me.  Go figure.

{twelve}  Then my husband had 2 checks for less than $9 to deposit.  Since I was depositing money [a few days after the ID deposit] he asked me to put them in my account.  They weren’t going to let me put that less than $9 in my account with out IDing him to make sure since his name is not on my account.  I thought, hell if I’m going to steal money it’d be a lot more than $9.

{thirteen}  My mom has given me checks with her and dad’s names on them before to deposit in my accounts and I’ve never had a problem.  They aren’t on my account either.  And those checks have always been more than $9.  Weird!

{fourteen}  I told the cashier to put the money in our joint account then.  Well then he was ok to put it in my account.

{sixteen}  My husband extracted all of our texts (between us) off my phone the other day.  I was reading back through the first ones (dating back to July 1, 2009) and laughed my butt off.  We sure don’t flirt very well through text.  haha!  Here were some cute texts that I just loved:

sent to husband July 11, 2009 (I was shopping with my mother before my parents trip to Hawaii):  Between getting my dad in shorts and teaching my dog to pee in the toilet, she has a better chance with the dog.

from husband July 17, 2009: If that’s a lie I’ll wash your ass and drink the water!
sent to husband: Ewwww gross
from husband: See I’m not lyin

Yes I was laughing my head off.  Yes there were more classic lines between the two of us.  No I’m not going to share all of them.  Why?  Ah, because I’m lazy 🙂

{seventeen}  Totally un-related, our hallways at work are wide enough for 2 people to pass by each other without problem.  It is friggin annoying when 2 people are walking side by side talking and meet someone from the other direction and expect them to move over.  Um…. Hello, the hallway isn’t 3 wide and so there is no where for that 1 person to move over, move your butt over in single file, pass nicely and then move back up next to the person you were talking too.  Don’t be so friggin rude!  Ah I feel better now that someone knows my pain!

{eighteen}  My hands feel like they’ve been sitting in the freezer.

{nineteen}  I love it… my phone gave me a map of where all the pictures on my phone were taken.  It’s hilarious!  I have 649 photos on my phone that date back all the way to the first day I had my phone.  And yes I’ve gone through and weeded out a bunch of photos.  But I keep that first one on there b/c how flippin cool is that! 🙂 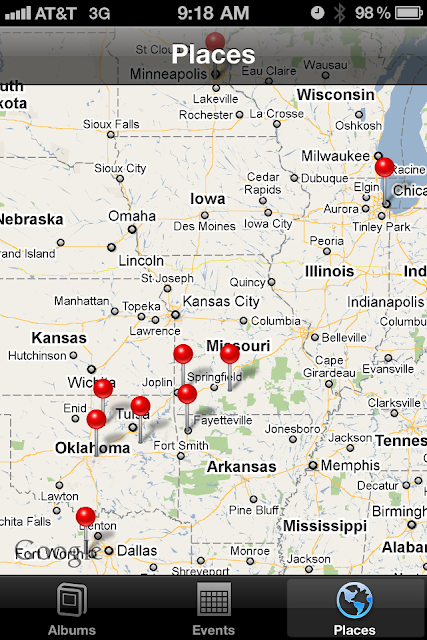 {twenty}  Now if it would do a break down of what photos were taken in what city/state.

{twenty two}  A couple weekends ago when my {step}daughter was over she was telling me she could speak French and kept saying Paris (Peree).  So I asked her how she was in French and she looked at me funny.  I laughed and said, I thought you could speak French.  She was like you aren’t speaking French.  I told her I was and told her what I said in English.  She then said I can speak French and said Paris (Peree) again.  Then I rattled off the line from Beverly Hillbillies (the movie) where Miss Jane met Miss Laurette.  My husband laughed at me :(……

{twenty three}  Thank you all for the wonderful comments on yesterday’s post.  I eat Crow a lot… and apparently must like the taste.  The reason I say this is because I said I never wanted to be a step-mom and I’d never marry a guy who had been married before or who had a child.  Yum, Crow tastes yummy…. LOL.  I’ve eaten it on a lot more topics than that though :(.

{twenty four}  I’ll leave you with this video of my Tbug riding Aloha. (taken off my iPhone)