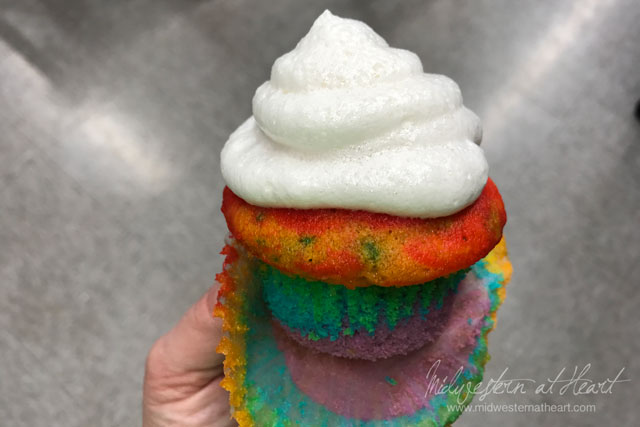 It’s time for the next installment of this cupcake thing I’ve been up to. Remember, these come out of the January/February 2017 Food Network Magazine.

When I woke up the morning I made these, I was worried about having 2 ingredients. Lemons, which I was fairly certain I had and Cake Flour, which I was pretty sure I didn’t have. I did go to the pantry to see if I had cake flour and surprisingly I did. WHAT?!?! I guess I bought it for something else one day and had some leftover. So… if you don’t have cake flour, not to fear! Make your own! Wait, what? Make your own cake flour. Yup! You read that right!

Cake flour:
1 cup all-purpose flour minus 2 tbsp (that is subtract 2tbsp of the ap flour). Then add in 2 tbsp corn starch. Use your handy dandy sifter and sift 5-6 times to incorporate the corn starch. Bam, your own homemade cake flour.

The next task was to find all the colors of the rainbow minus indigo. Truthfully, I’m still not sure what color Indigo is… it’s got to be between blue and violet… Roy G Biv… Red, orange, yellow, green, blue, indigo, violet 😁.

I separated my cake batter out, went to coloring up the icing, and spooned it into the cupcake wrappers. Toward the top, the yellow, orange, and red, the cake batter didn’t totally just sit into the wrappers as they should have. So when my cupcakes were baked, the tops looked more tie-dyed instead of rainbow, but the first colors had that rainbow effect.

I’m not a huge fan of meringue and the frosting/icing was a meringue type frosting. When I iced them, they looked beautiful. The next day there were all kinds of air pockets in the icing. {sigh}. With all that knowledge, the cupcakes tasted lemony and fresh and I totally dug them, the icing was more meringue tasting and I wasn’t a huge fan. But if you like meringue, this is a good icing for you!

Now for the recipe so you can try it too!

Make the cupcakes: Preheat the oven to 325 degrees F. Line a 12-cup muffin pan with white paper liners. Whisk the flour, baking powder, baking soda, and salt in a medium bowl; set aside. Stir together the milk, lemon juice, and vanilla in a small bowl; set aside (the milk will curdle). Beat the butter, 3/4 cup sugar and the lemon zest in a large bowl with a mixer on medium-high speed until light and fluffy, about 5 minutes. Reduce the mixer speed to low. Beat in the flour mixture in three batches, alternating with the milk mixture in two batches, until combined. Increase the mixer speed to medium and beat briefly until smooth.
Beat the egg whites in a large bowl with a mixer on high speed until foamy. Gradually beat in the remaining 1/4 cup sugar; continue beating until stiff glossy peaks form, about 3 minutes. Using a rubber spatula, fold the beaten egg whites into the batter in two batches. Divide the batter evenly among 6 small bowls; tint each with 1 to 3 drops gel food coloring, stirring to distribute the color.
Divide the purple batter evenly among the prepared muffin cups (about 1 1/2 teaspoons per cup) and gently spread to cover the bottom; layer the blue, green, yellow, orange, and red batters on top, gently spreading each color but making sure not to swirl the colors together. (The liners will be full.) Bake until the tops of the cupcakes spring back when gently pressed, about 20 minutes. Let cool 5 minutes in the pan, then transfer to a rack to cool completely.
Meanwhile, make the frosting: Whisk the sugar, egg whites, water, vanilla, cream of tartar, and salt in a large metal bowl set over a saucepan of simmering water until combined (do not let the bowl touch the water). With the bowl still over the simmering water, beat the mixture with a hand mixer on medium-high speed until stiff glossy peaks form, 5 to 7 minutes. Remove the bowl from the saucepan and let cool 5 minutes. Transfer the frosting to a piping bag fitted with a large round tip. Generously pipe onto the cupcakes.