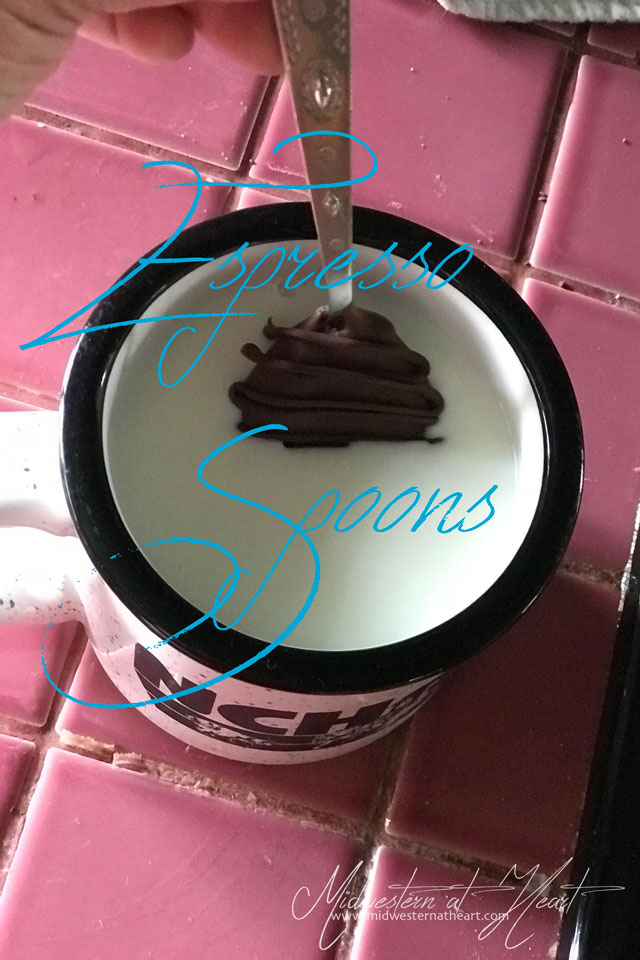 I’ve mentioned before that coffee is a newer thing to me. I didn’t really drink coffee until after I was married. Hubby and I went to the Showboat Branson Belle and coffee came with the meal. I told them, yes I wanted some. He looked at me like I was crazy. I probably was, but I actually drank it and liked it. And the real kicker is, so did he.

We had already owned a coffee pot basically because I thought every house needed one in case you had a guest come over who wanted coffee. That and every once in a while a recipe called for coffee so we were set. But after that, that Christmas he got a Keurig Machine because we wanted one. Ooooh, we went high class, right. ha. Nowadays I want a French Press just because I hear it is even better coffee and I’ve never tried it. I found one on Amazon I want that is gorgeous but expensive… I found a cheap one ($10) at Ikea a few weeks ago. When I said I was going to buy it, I was told to hold off and get the one in the Amazon cart. It’s $40 versus $10. If I don’t like it, I’m only out $10 instead of $40. Needless to say, I don’t own either one.

Anyway… I saw a YouTube video that Tatyana of Tatyana’s Everyday Food did on Espresso Spoons. This year I got to attend our PEO talent table to raise money for our projects. I was trying to come up with something different to make for the auction. Those spoons popped into my head, so even though Tatyana says they are for winter… I thought it was something different!

First off, what is said espresso spoons? Well, it is everything you need to make coffee. All you do is add the hot milk/water and bam, a cup of chocolate coffee.

She said she got her spoons from an antique store. I just went to the good ol’ Walmart and bought 14 spoons. 3 sets came in 4 spoons and then one set came as 2. I paid under $2 a piece for these brand new spoons. I went for the tablespoon size. She said you could use either, but I thought the bigger was more what we needed. 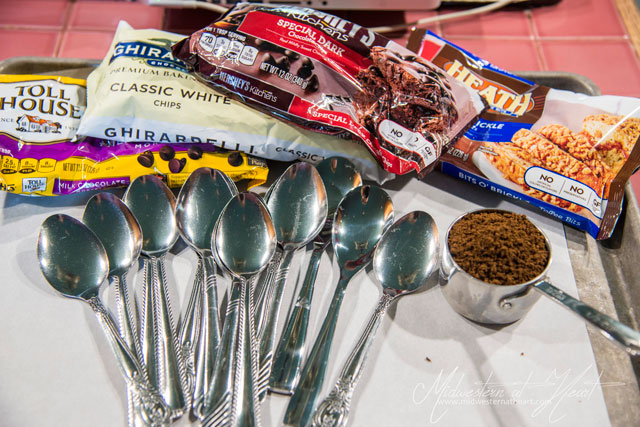 First, you melt some semi-sweet (or dark) chocolate with the coffee. Then you put it in the spoon. Level it off, and place them in the fridge for 10-20 minutes to let them set up. 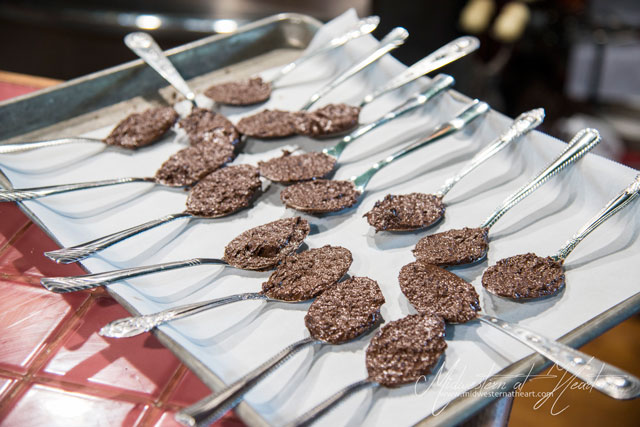 The melt your chocolate. Cover each spoon in chocolate. If you are counting spoons, there are more than 14 there. I used 3 of my own, that way I could try one of each, white, milk, and dark. Then, you place them back in the fridge to set up…. again. See I told you… you need time. 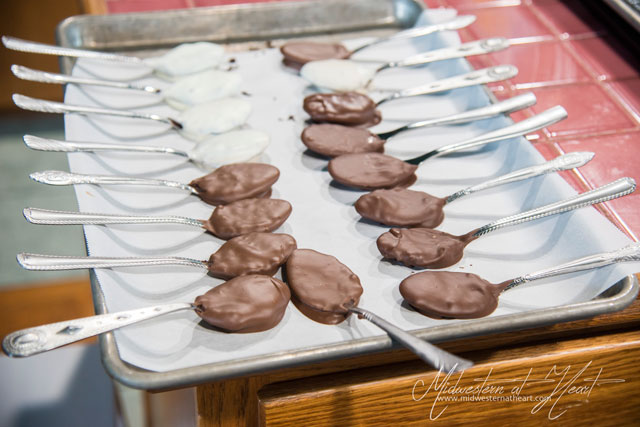 Then remelt the chocolate and make pretty designs. First, you redip the chocolate for a second coat. Then put the remaining chocolate in piping bags and drizzle. This is also where the heath chips come in. You sprinkle them in the second coat of chocolate so they’ll stick. They will melt in your coffee and add a nice heath taste. Yum! 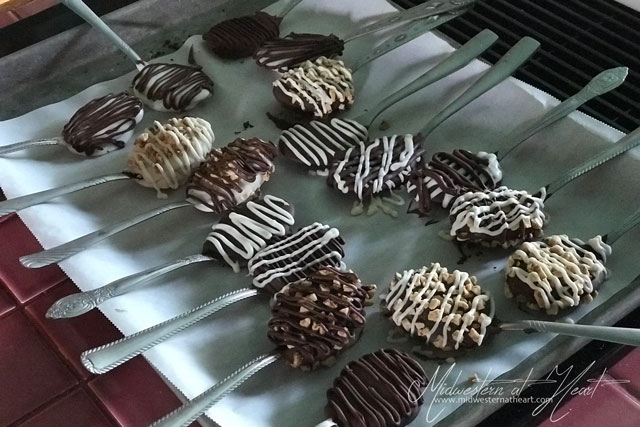 Then back in the fridge, they go to set up again. Here is one of my spoons. I drank this one. I didn’t quite get my milk warm enough. You basically add it to one cup of warm milk/water. Milk is better though, am I right? You let it sit a couple minutes and everything melts off the spoon. Then you already have a spoon to stir it in. I had hubby try it and he even said yum. He’s a sugar/cream kind of guy when it comes to his coffee, I just need cream, and he didn’t even ask for his sugar/cream. I guess the chocolate covered that for us. Yum! 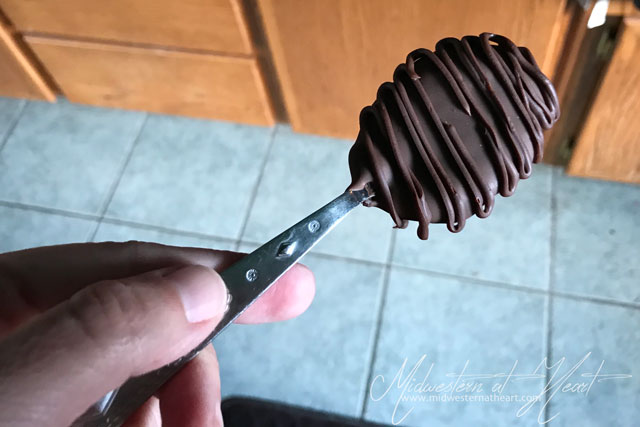 You also need those cute little candy bags to individually wrap them. I decided to sell them in lots of 4. That way if a wife bought them, she could share with her husband. I also tried to mix and match the white, milk, dark/semi-sweet chocolate so they could have options. Since this was the week after the Fourth, I decided to go ahead and tie together with 4th of July ribbon.

Then I typed up how to make directions in a pretty font, cut them out, and taped them on so they knew exactly how to make them. 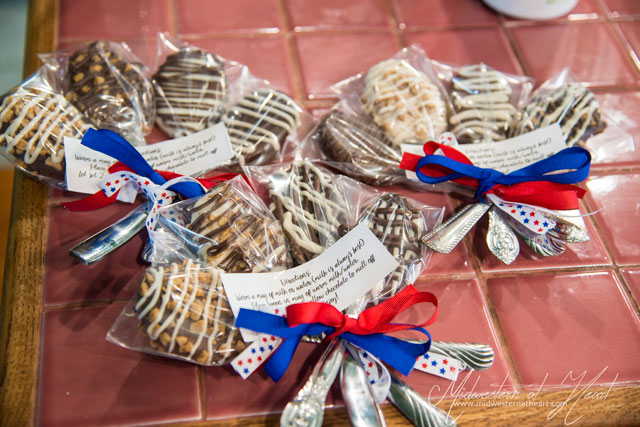 I thought I’d have something unique. I did but I didn’t. No one else had coffee spoons (espresso spoons), but there were two other coffee items and a tea item. Haha… I had to laugh. Even though I tried to go totally different, I didn’t quite do that. My spoon sets went for $6/piece. 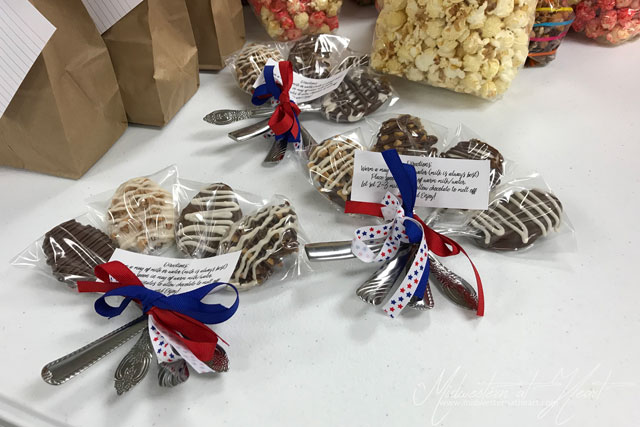 In the past, my grandma has always been the auctioneer, but it sounds like she gave that up a couple auctions ago. I haven’t been able to make some of the past ones in the recent years. Does that sentence make sense? So these two sisters took over. I guess they always dress up too. When my grandma did it, a gal named Cheryl was the delivery fairy and she wore a tutu. We have quite the group of ladies. haha. 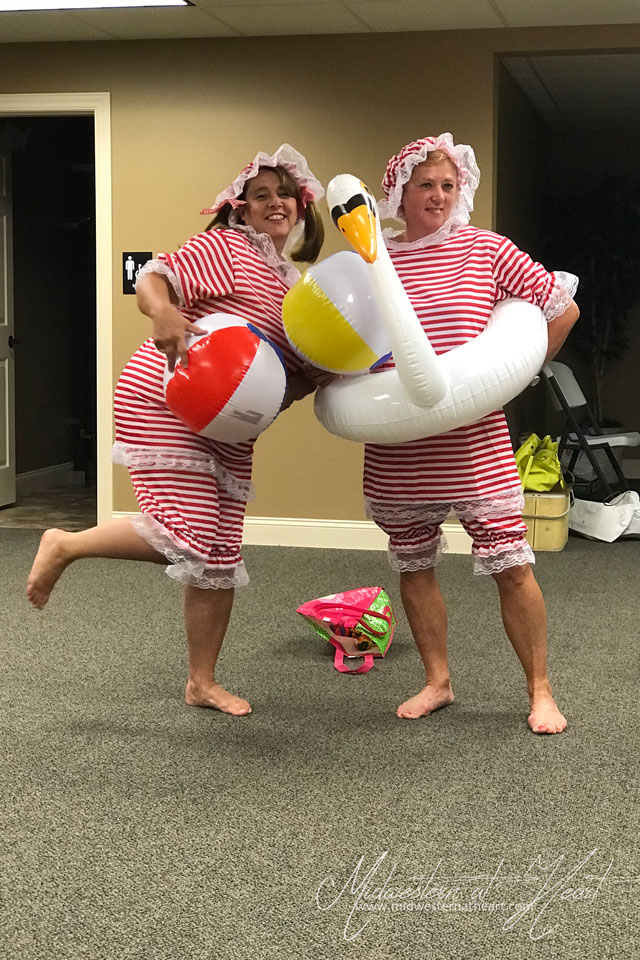 And last but not least, my friend Jody got to go with me. I just thought I’d document that for two reasons. I was there with a friend (I didn’t have a conflict) AND we both saw that two years ago in the TimeHop app, we actually spent this day together. Isn’t that funny? Same day. 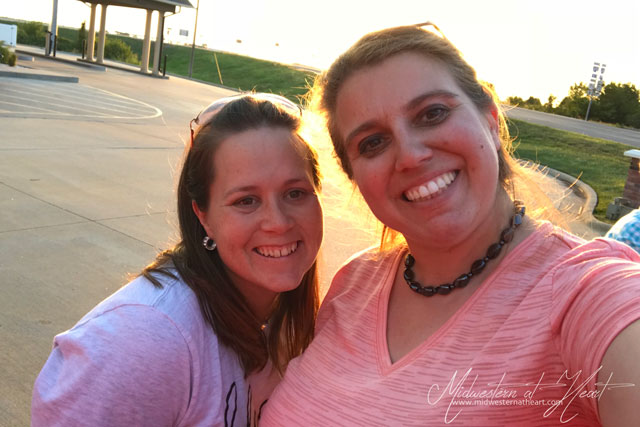 I still haven’t heard how much money we’ve raised. Unfortunately, they’ll probably keep that until the next meeting where I’ll have a conflict again. I’ll have to ask grandma. PEO owns Cottey College in Nevada, MO and has chapters all over the US and world. They are all about promoting education for women.

p.s. If you didn’t know, Cottey College is a 2-year college for women only.