The real start of the Christmas season for me tends to be our trip to Ft. Worth. There have been a few years I haven’t been able to go, but I try to make it down there every year. Sadly, for me this year was a little lackluster. It was fun, don’t get me wrong, but it just didn’t scream Christmas season to me.

Hubby had to go to San Francisco for work the whole week leading up to Ft. Worth. He flew into DFW on Thursday night. We left home Thursday night and drove as far as Denton, Texas. Then from there, Friday morning we drove to the hotel that hubby was at and picked him up.

It seems like every year they change up the schedule for the NCHA Futurity. This year the NonPro and Amateur finals happened Friday night, the Open Semi-finals happened on Saturday, and the finals for the Open happened Sunday evening. Truthfully, that’s how it used to be, then they started changing it. We’re back to basics now.

No trip to Ft. Worth is complete without a trip to the Stockyards. I have to say, this is probably my favorite place on earth… or at least one of. Hubby though wasn’t in the Holiday spirit so I felt like I was “dragging” him and he pretty well refused to go into the stores with me. One of my favorite things to do is window shop at the stores and I couldn’t hardly budge him into a store with me. I was getting frustrated. 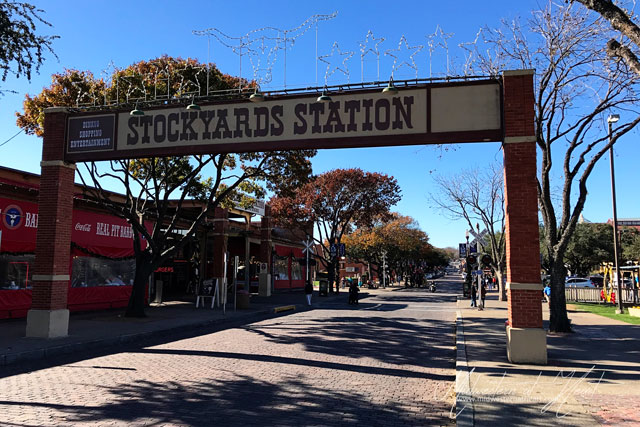 Luckily Abug was in it with me! She saw the horses and the bull and the … fill in the blank. She wanted to do it all. Yes, she’s been before, but now that she’s 3, she’s really experiencing it all and I absolutely LOVE it! 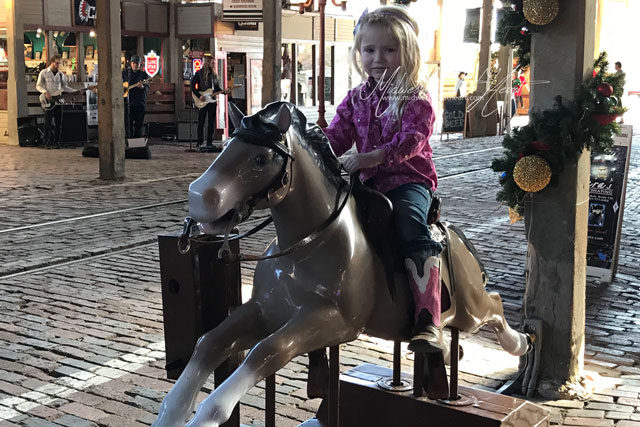 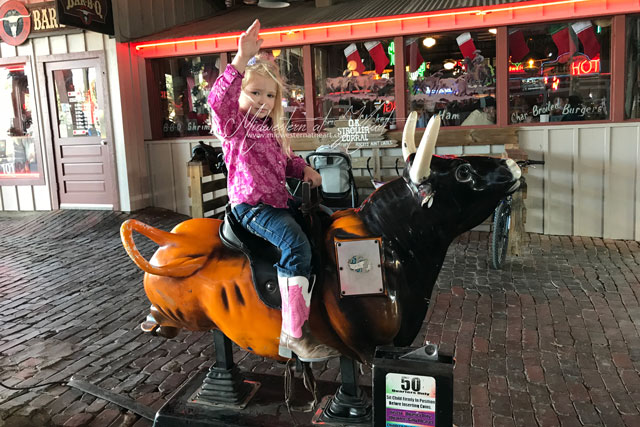 I believe the best Santa is the one at the stockyards. We went and sought him out. I asked her if she was going to sit on his lap. She told me yes, marched right up to him, plopped down on his lap, and told him she wanted a Barbie Dream House. Bam! 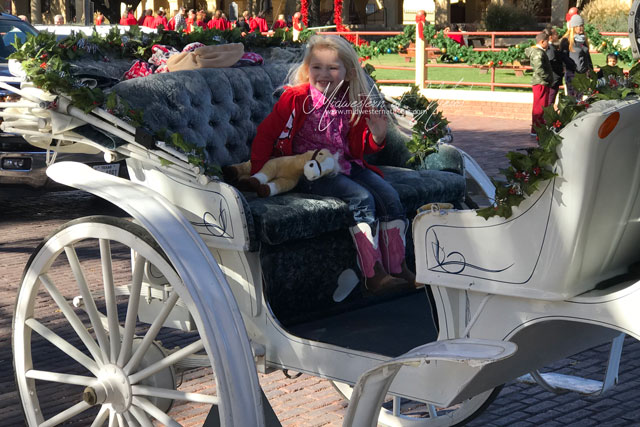 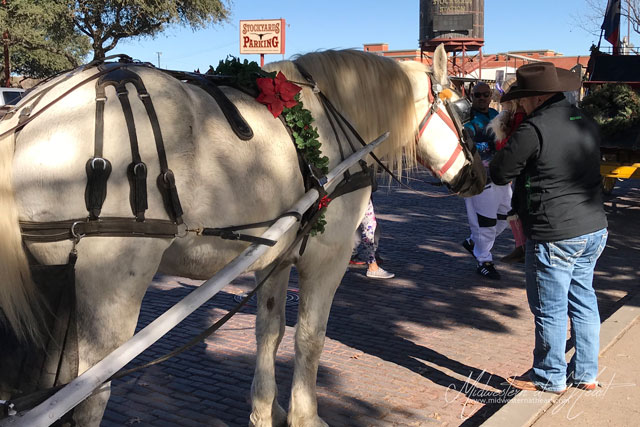 Hubby and dad spent a lot of time sitting through the horse sales during the day while we were there. But the real reason we were there was to watch the NCHA Futurity!

I have a young horse here at the house that I really want to train as a cutting horse. I keep asking my dad who I should take him to to get some basic training done. Dad always says Ryan Moore who lives over in Eastern MO. I’m like, sounds good. Luckily he made the Semi-finals this year on his horse. At our hotel I ran across the owner of the horse Ryan was showing and she and I had a great conversation about the show and Ryan and the fact we were both from Missouri. 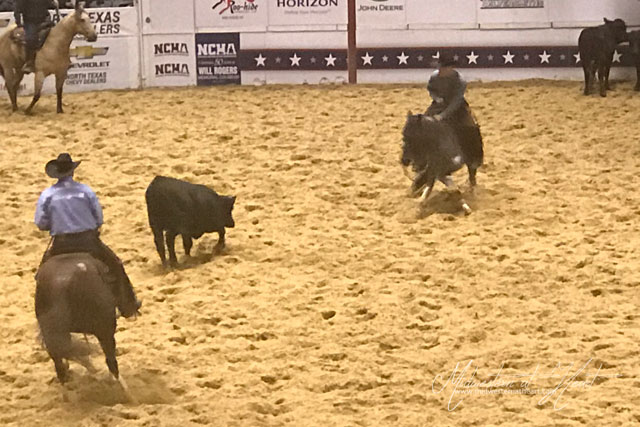 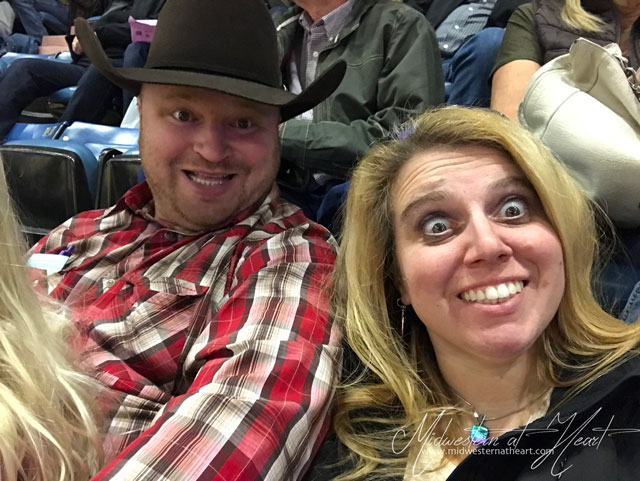 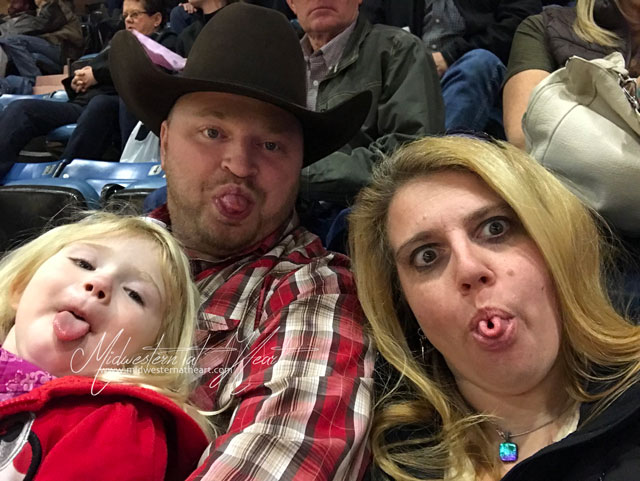 The Semi-finals of the Open tends to be the longest night. We left before the 5th herd of horses because it was after 10 pm and we were hungry. Luckily with technology, we were able to watch the show while eating dinner. 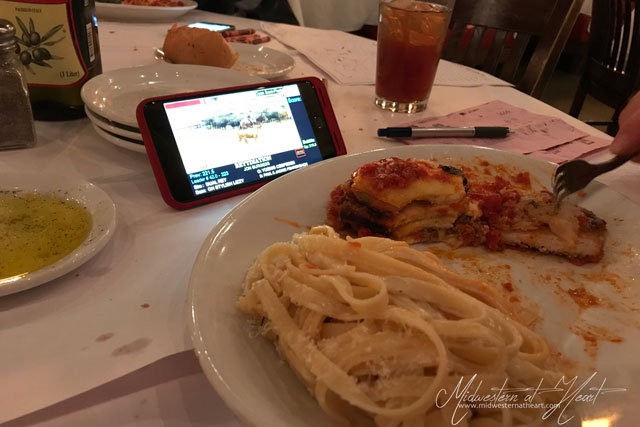 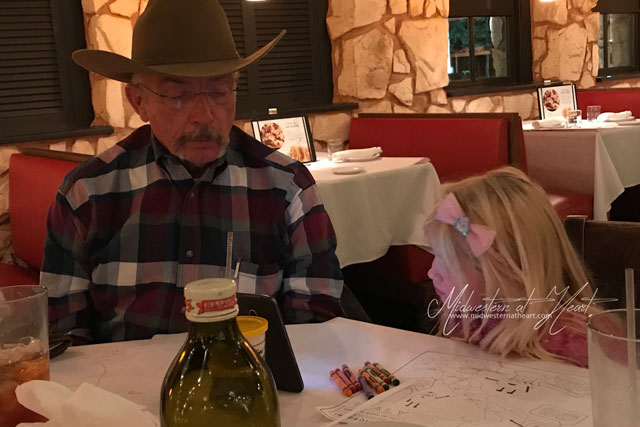 One thing that makes Ft. Worth so special is seeing family. My aunt and uncle who live in Southern Oklahoma show/attend the NCHA Futurity so we always meet up with them. Usually at some point we eat dinner or lunch together or both. Then we also tend to go shopping with AC.

My other aunt lives in Arlington, Texas, so one morning while we are there we make plans to meet up with her and her friend Shanon for breakfast at Ol’ South. This is a staple. So if anyone loves me, Ol’ South sells their coffee cups and they have one in purple. Why I didn’t buy one while I was down there this year who knows… but I really want one :). 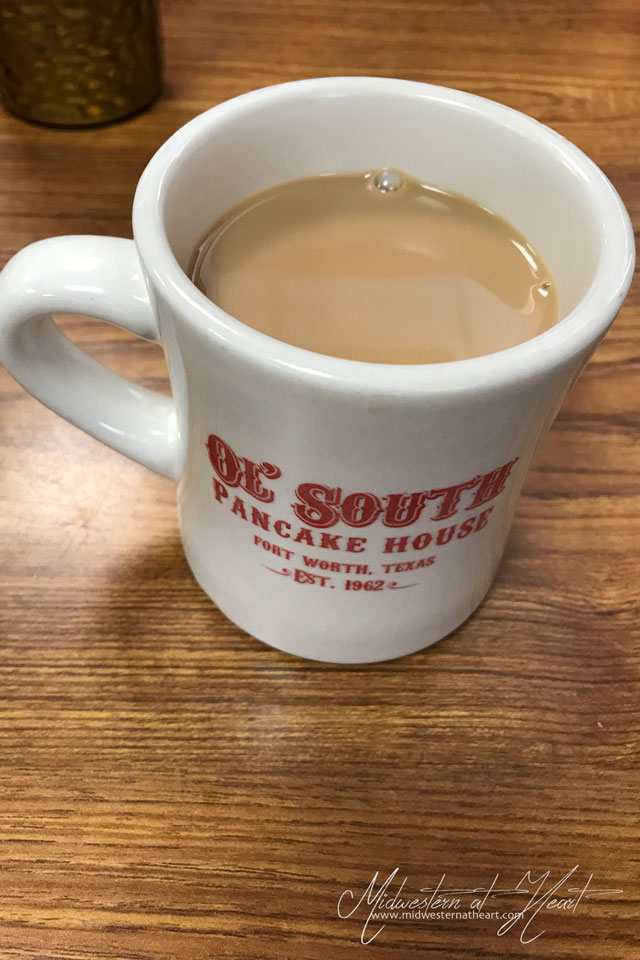 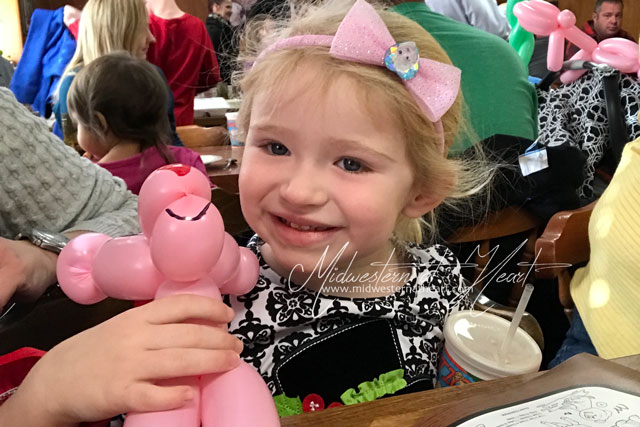 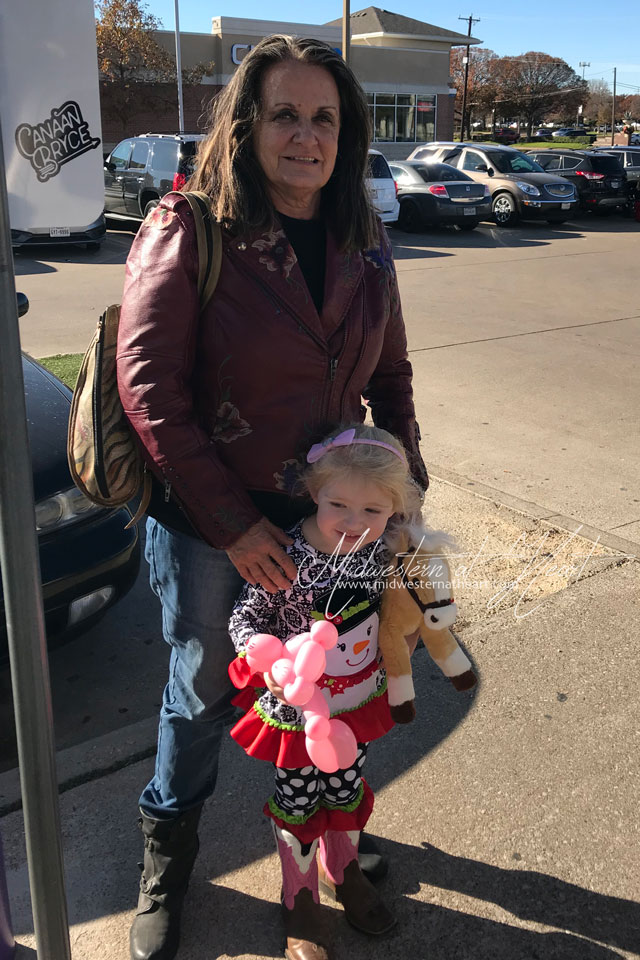 So this cinnamon roll. OMG this cinnamon roll. Story behind it…. When I was a teenager I showed down in Ft. Worth at the AQHA World Show quite a few times. This place is always set up there and they have the best cinnamon rolls and loaded baked potatoes. So every year we’re down there for the Futurity I always smell them and want one, but I’m never hungry. Well this year we ate a large breakfast and no one was really hungry for lunch so mid afternoon Abug was hungry and I kind of was too so we ate one! OH YUM! 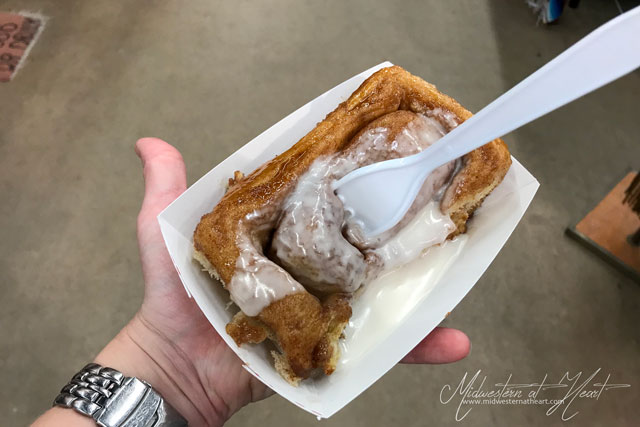 The big shabang is the Open Finals. That’s what it’s all about. Before they bring cattle in for the show they have a huge awards ceremony where they bring in the new NCHA Inductees into the NCHA Hall of Fame. 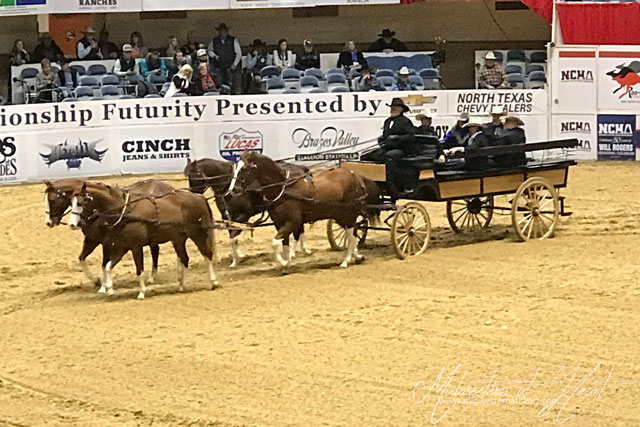 They also raffle off the 6th Judges seat to the highest bidder to watch the finals from the judges stand. And then this….

This guy sang the National Anthem while drawing this picture. Then they raffled it off for a charity there in the local Ft. Worth area. They raised over $7,000 with this painting. WOW! 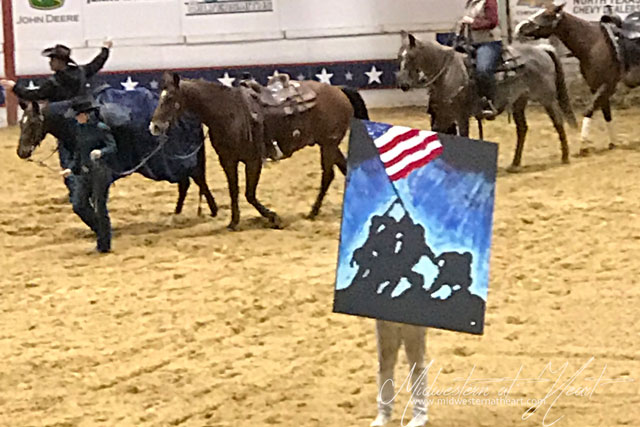 So Austin Shepard won the Open finals on Dual Reyish with a score of 228.

Then it was time to head home for another year… 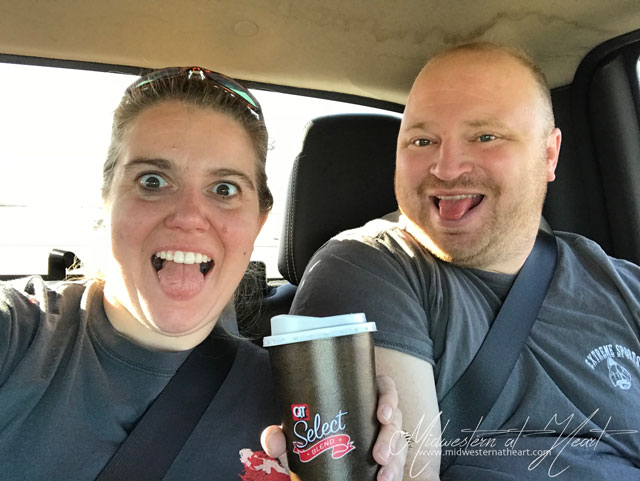 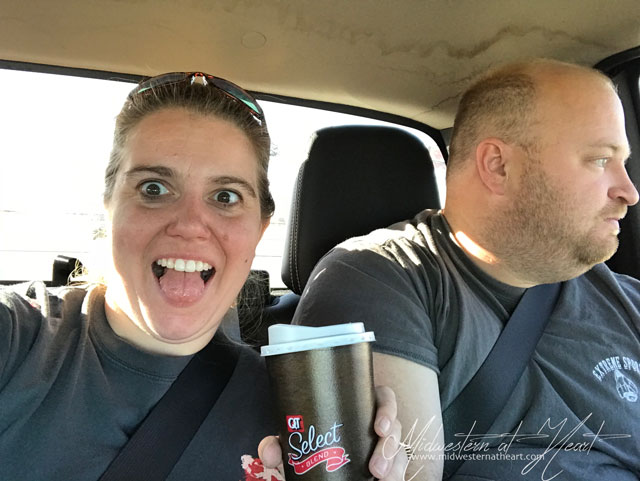 So…. the water tower picture… On our way to pick hubby up Friday morning, Abug had on velvet pants. They kept getting pulled down in her carseat and she kept throwing a fit. My dad had her start looking for water towers to take her mind off the pants. Then when we went shopping with AC she was still pointing out water towers. So on our way home we started texting AC pictures of water towers just because. 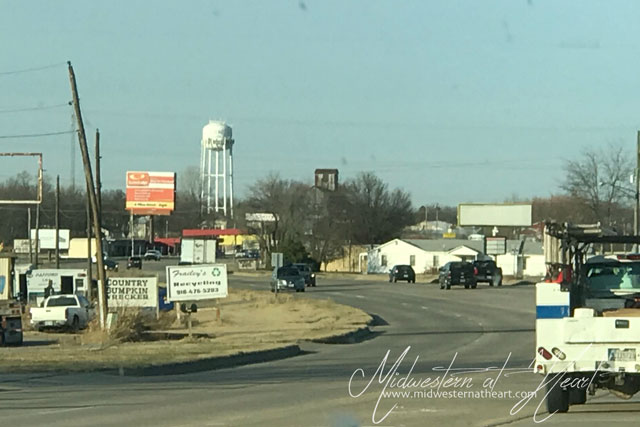