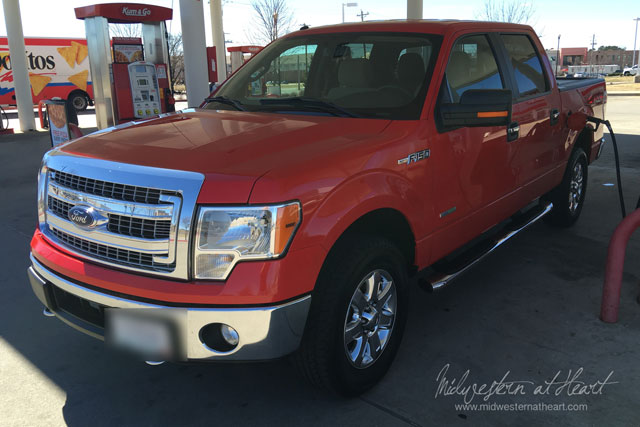 Let’s see if I can diplomatically tell this post, finally about a month later.

As most of you know, we’re a family of 4. Back in 2011 though, we were just a family of 3. In January of 2011 we traded my Mustang off for a 2011 Hyundai Elantra and Hubby’s 3/4 Ford for a 2011 Hyundai Tucson. That was done within one week of each other and the truck was traded off just days before the 18 inches of snow that snowed us into our house.

That summer we discussed how practical the Tucson was because even though it got great gas mileage, we needed a truck more than we realized. Every time we needed a truck, we had to borrow my dad’s which put him out of a truck. It was annoying for everyone involved.

So later that summer we went on a hunt for a truck again. It came down to the question do we need 4×4 or 4 doors more because for the price and what we could afford, both wasn’t quite an option for us.

We decided since we were a family of 3, we’d go the 2 door but 4×4 route and wound up with a 2011 Chevy 1500 (half ton). It was a great truck and did most everything we wanted, except haul a horse trailer. But when we had to steal dad’s truck to haul a trailer, at least he wasn’t out a truck so it worked.

Well in 2014 our little bundle of joy came along making us a family of 4. May of 2015 my dad wound up buying a half ton 4×4, 4 door truck that we wound. This last winter wasn’t bad and neither was the winter of 2013, but still, with 4 people and a 4×4 truck that seats 3, it just doesn’t add up. In bad weather my car doesn’t do well and his truck wouldn’t haul all 4 of us. This last winter we started borrowing dad’s half ton and leaving him ours so he had 2 different 4×4’s to drive as an option.

But it was decided that we needed a new truck. One that had 4×4 but one that had 4 doors and seated either 5 or 6 depending on if the front was a bench seat or captains chairs. So we went on the hunt.

Can you guess where this story goes?

After a couple months of debating the size and whatever hubby had guidelines of what we could afford.

One afternoon he and my dad were cruising the internet and found one in Kansas City. It was a 2009 (or was it a 2011? I can’t remember we talked so many trucks. oy!) Ford King Ranch F150. Very pretty. It was late on a Saturday so they had closed for the day, so first thing Monday morning hubby called up there and asked them if they still had the truck. They said yes. So he took a half day of vacation, swung by the house and picked Abug and me up to head to KC to look at this truck.

When we got up there, Abug and I stayed in the truck and hubby went to find the guy he spoke with. Then hubby came back to the truck and said, you’re not going to guess this. I said what. Turns out they sold that truck on Saturday. So they had a little older F150 Platinum edition that they wanted us to look at. Hubby agreed. So therefore I agreed, grudgingly because we called specifically to save ourself a 300 mile trip.

Anyway we went in to talk to them after we test drove it and they insulted us. They knew what we owed on our truck still and they offered us $200 less for trade in on our truck than what we owed on it. I was pissed and walked out. Especially because we’d been offered more through no site auto trader plus $200 less, really? You couldn’t have at least paid off what we owed… So we left. The salesman wanted to introduce us to the sales manager who insulted us and we walked out with our keys to our truck. We felt defeated.

That meant the search was still on.

Later in the week hubby found another truck in Aurora at the Ford dealer there. We went and test drove it, really liked it and tried to talk money. Because of the mileage, we couldn’t get qualified for a truck loan on it. The guys there were super nice and offered us more for our truck than what we owed by a few hundred dollars and it was just a good experience, but sadly we weren’t able to deal with them because of the mileage on the truck. They told us we had to start looking at vehicles with less than 100K.

Hubby and I were so disappointed and a little down on our luck to say the least. I kept telling him that it wasn’t meant to be and when the right thing came along, we’d know it. That was very hard, but that’s what we had to keep telling ourselves.

So the weekend that I went to Oklahoma to see my aunt, hubby found another truck. He and my dad made plans to go to Bentonville, AR, Showcase Cars and Trucks to look at a truck they had on their lot. I told hubby I trusted his judgement so do what he knew was right and if it wasn’t, come home because at least we still had a truck.

Well hubby said they were excellent to work with, we were able to get approved, they gave us the right money for our truck and bam, we had a deal.

We wound up with a 2014 Ford F150. It had been one owner, owned by a corporation as a fleet vehicle. So the mileage was about 10,000 more than what was on our current truck but it is an F150, 4 door, and 4×4. All the things we needed. So I would like to thank all the businesses that were willing to work with us, including the dealerships that were willing to work with us but we couldn’t find what we were looking for. Thank you!

Our Story - His Side
The Living Room Update
Exciting Link Up News!!!
Food, Scuba Diving, Friends and Fun