Over the weekend I went to my parents house to pick up a set of dresser drawers for Tbug’s room.  For some reason I went into their basement and found a bucket with all my old cars in it.  Now when I was a kid I had 3 favorite toys, other than playing kitchen (by the way I served the BEST water!), those were Barbies (yes, and still like them), play horses (for when I couldn’t be on a real horse) and cars/tractors. 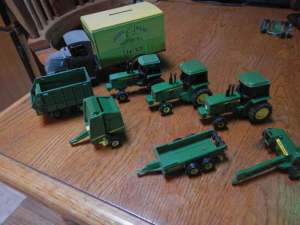 But don’t worry, I wasn’t a color snob, I went for red as well, thank you International Harvest and Case which is now Case IH.

And even one lonely blue Ford.  He pulled the green and red equipment just fine! 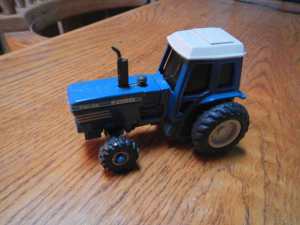 I also had the Monster trucks.  Now it does crack me up that all my monster trucks were in deed Fords…. until Hubby’s Chevy and my Hyundai, all I’ve ever owned was a Ford.

Hubby told me these were three cars as seen on Days of Thunder.  I didn’t probably know it then, I just knew I had my very own race car.

And sports cars galore.  Anything from American to Foreign.  My absolute favorite was the black Pontiac Trans AM.  I wanted one of those cars when I grew up so bad (at the time).  Now I must also tell you that my parents had a 24 foot around above ground swimming pool and one of my favorite things to do was race them off the deck into the pool and then dive in (read that as jump, I can’t dive) and fish them out.  Yeah, that’s why the paint looks a little rough on a few of them….

Do you remember Micro Machines?  Apparently I liked them as well! I wasn’t a car snob!

Then I found this bad boy.  I can’t explain him… 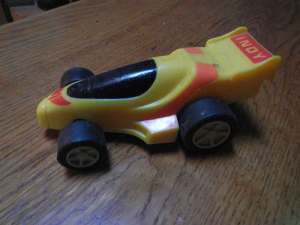 You know these cars had to be old, even when I played with them. 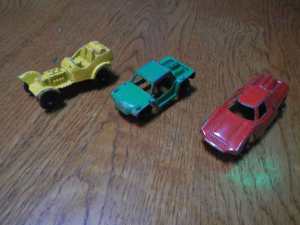 I always said I wanted a Vet (Corvette), I guess technically I had one ;).

And we can’t forget the regular pick up truck, the bulldozer, the liquid tanker truck which obviously was hauling Nitrogen fertilizer out to the field for maximum crop yield and the Cruella Daville car for a night out on the town.

Hey all kids are entitled to an imagination, and by george I had one.  In fact… these were all my cars! 🙂

And for anyone who wants to knock Barbie… come on, she’s a snazzy dresser and was career oriented. 🙂

Anyway I was excited when I found these, not sure what I’ll do with them now, but we’ll see :).  I wanted to put at least the John Deere in my kitchen for decorations, but well… that may still happen, we’ll see.

0 thoughts on “My Car Collection”