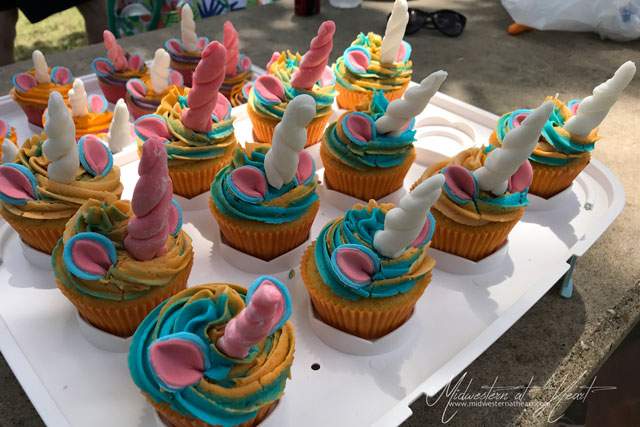 At our house, it seems like birthdays just go on and on. That is no different for the Abug. She had her birthday party, we took birthday cupcakes to the lake (here), and then she got to go out to lunch and dinner on her birthday. And since you need a birthday cake on your birthday, she got one of those too.

We learned early on that going to the lake with birthday cake, cupcakes are easier. You don’t have to have a knife and plates to cut up and serve birthday goodies. Now… earlier this year, we actually had cake at the lake (Funfetti & Chocolate Dulce de Leche), but for her birthday it’s a little different. Why? Well, usually we are celebrating it at the lake during the Underwater Safari Hunt. That is just a crazy day anyway, so cupcakes are definitely the way to go.

Initially, I wanted to do the horse/unicorn head cupcake I saw on Facebook earlier this year for our cupcake, but since I decorated on Friday, I was afraid that heading to the lake with it already decorated, they could potentially move and that would be sad. Then I ran across Cupcake Jemma’s YouTube video on Unicorn cupcakes and I was sold on that idea. I already had some fondant at the house for the Unicorn Cake horn and ears that needed to be used up. Easy Peasy! 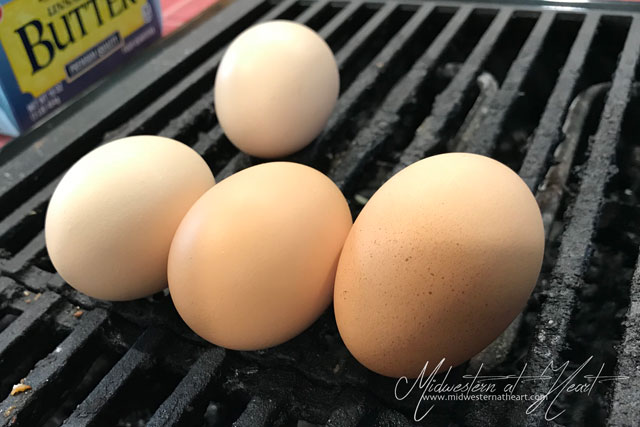 First off, let me give you a little info on me… haha… So… you see these eggs above? They are homegrown… not from the store. Farm Fresh eggs bother me just a little bit. I know I grew up on a farm. I know that all eggs, even from the store come from a farm. Better yet, they come from a chicken’s butt. But for some reason, I always have that slight hesitation with homegrown, farm fresh eggs. I don’t know why. Yes, I’ll use them. Yes, I’ll eat them. But there is still that side of me that goes… they are from a chicken’s butt when they are farm fresh. haha. Okay, anyway… 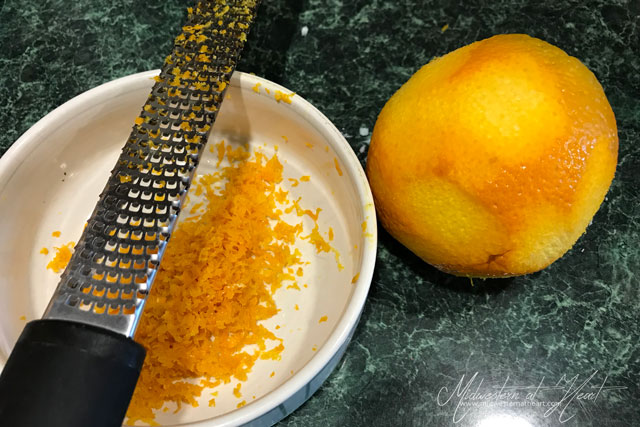 I chose two different types of cupcakes. Both of these types of cupcakes came from iambaker.net. Amanda had me covered this round. I went with Cherry Limeade cupcakes and Orange Creamsicle Cupcakes. Both of those flavors just scream summer to me! So the Orange Creamsicle cupcakes called for orange zest. I pulled out my microplane and sent to zesting. I even got my finger. Note to self and others: DON’T DO THAT. It hurts. In my best Beast voice from Beauty and the Beast when Bell is cleaning his wounds and he yells at her that hurts. Ouch! I’ve always heard that would happen but so far been lucky until this time. Hey, I guess I needed to learn the hard way. 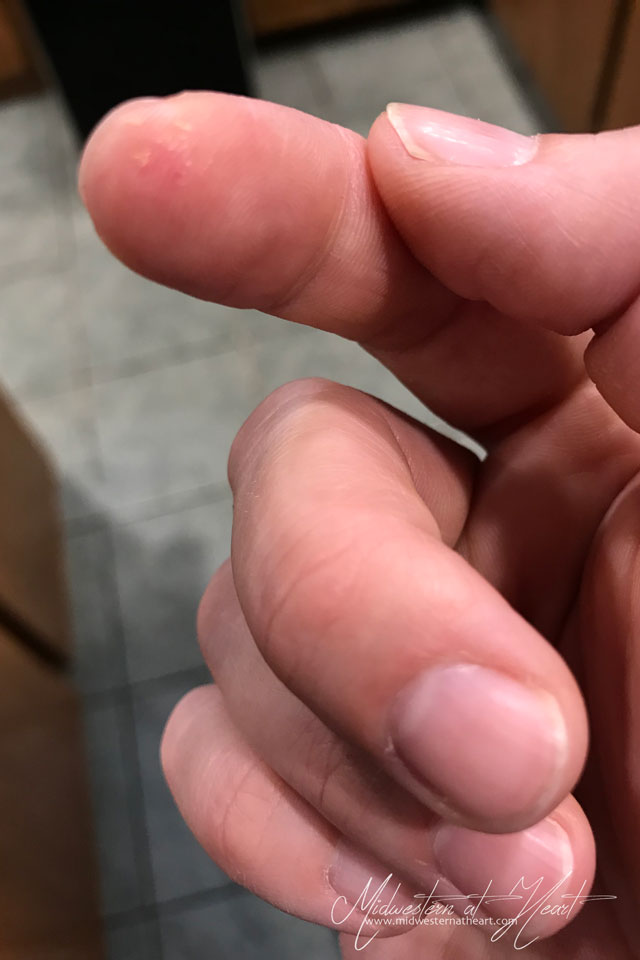 One difference in the cupcakes… along with the others… is Orange has a more prominent flavor than Lime. So it was just 1 tablespoon of orange juice versus 2 tablespoons of lime juice. Quite interesting. And the orange cupcakes had a bit of a stronger orange flavor while the lime had a more subtle flavor. Don’t get me wrong, both were yummy!

Now the orange had orange in the icing whereas the lime cupcakes had maraschino cherry in the icing. That’s where the cherry came in for the cherry limeade. Her recipe said that she came out with 15 a piece but I only got 12 out of each recipe. The difference in scoop size obviously. 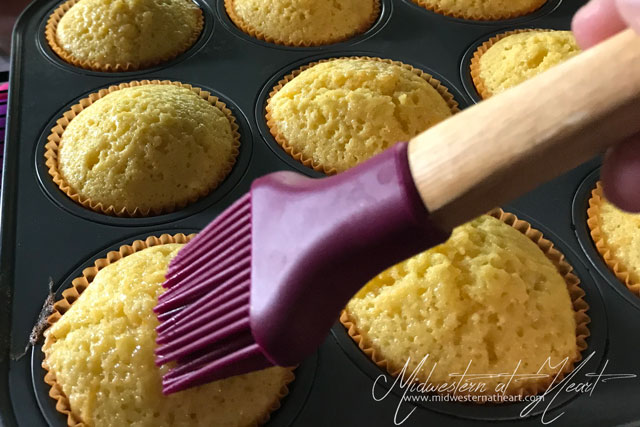 I had fondant left over from my Unicorn Cake I made for her birthday party. Initially, I was going to make homemade fondant, which I’ve never done but really want to. In the end, I bought the box stuff. It was faster and easier. 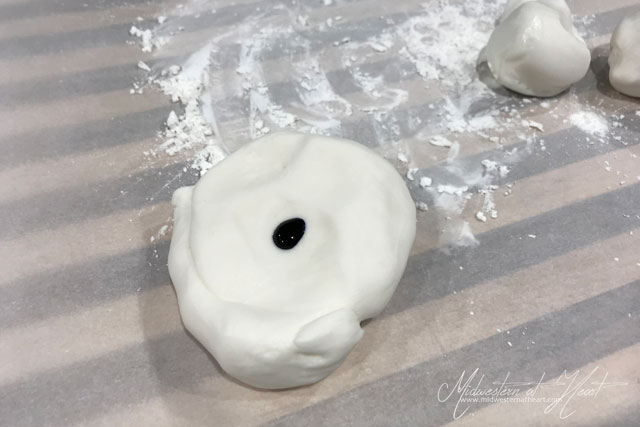 I decided to do pink and blue ears like Cupcake Jemma did for the ears. I’m telling you, my colors were bright and I used less red than I did blue trying to get more pastel colors and they were still bright. The red turned out looking like pink bubblegum. At least it was pink! 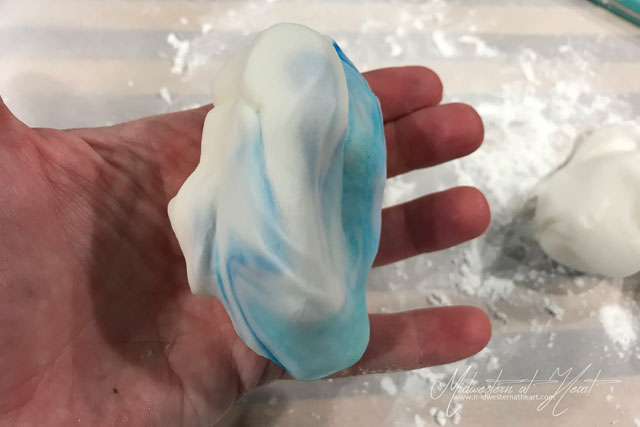 She used a small circle cookie cutter. I didn’t have one small enough. That sent me on the hunt for a small circle. Hubby laughed at me because I wound up using the lid off my water bottle. Hey, it was the perfect size and worked like a charm. 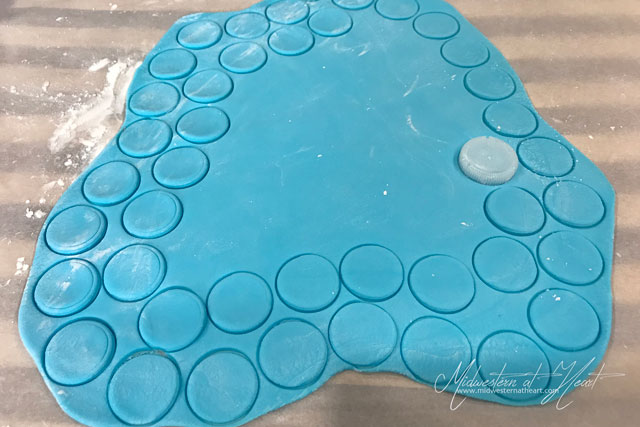 I used the same size for my pink. Now my blue was the outside and my pink was the inside. 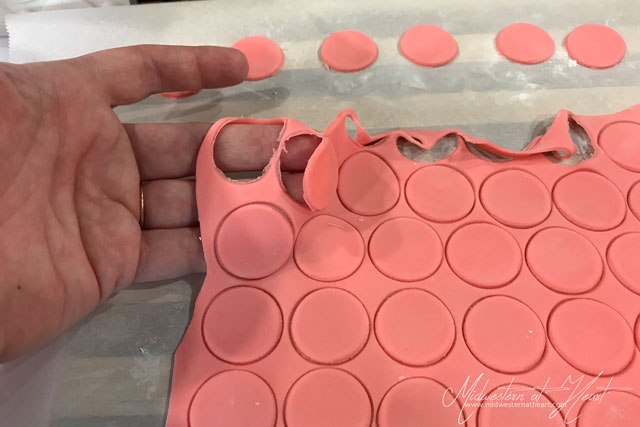 So you’ll notice they’re the same size. No big deal. I just cut them into weird oval shapes. That allowed for them to be placed together and blue to show around the pink. Score! 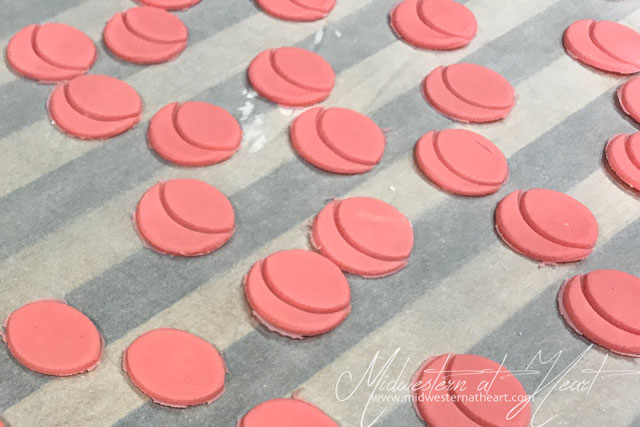 Then you use a paintbrush and a little water, and “glue” the pink into the blue. Pinch sharp at one end and slightly pinch the other end and you have ears. 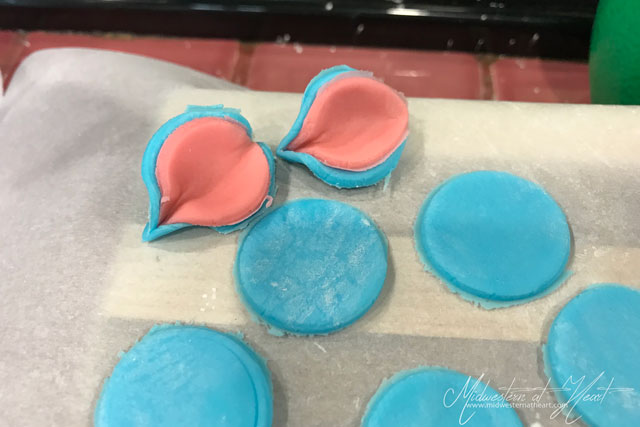 I made extra ears. It was a good thing too because I accidentally dropped one into the bowl of water. That was a mess. It eventually dried but it was so gummy up to that dried point. Yuck! It even stuck to my fingers.

Tip to working with fondant.

Use Powdered Sugar or Cornstarch. Keep your working surface and hands covered in them and that fondant won’t stick to your hands. As bad anyway. Obviously, you need to keep reapplying. 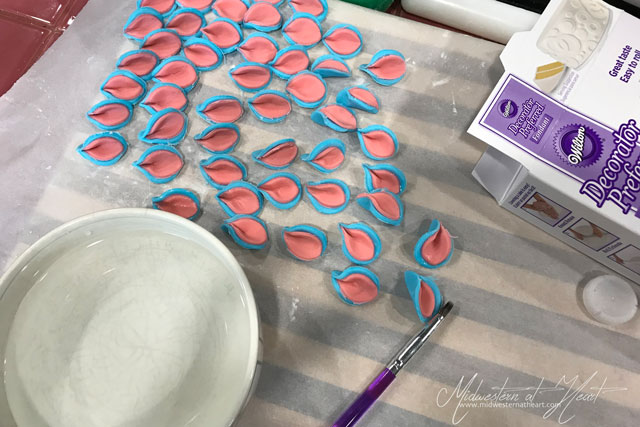 Next were the horns. You take two small balls, roll them into a cylinderish shape. Smaller at one end and larger at the other. Then you wrap them around each other. Remember to use water to glue the pieces together. Dip a toothpick in water and stick it in the end. Then… 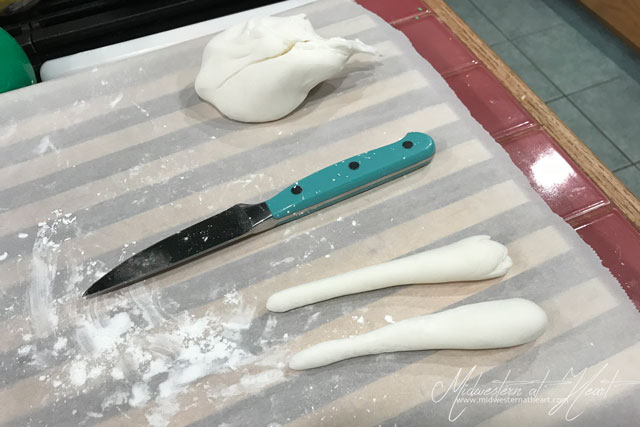 Lay them out to dry. I learned with the cake horn, let it dry before you try to paint it with the edible paint or else you have a mess on your hands. 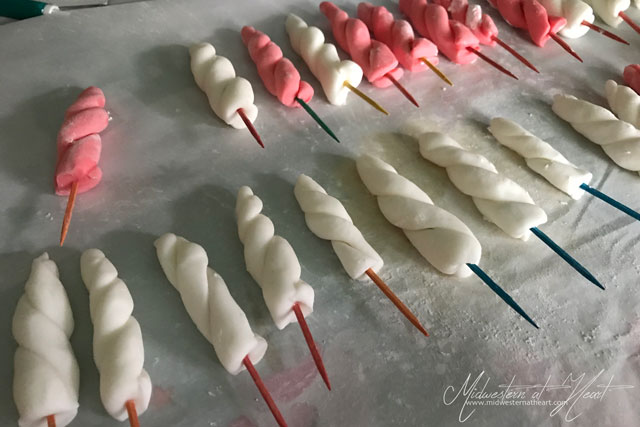 Now, to paint. You have your luster dust. I went with gold. A little vodka to make the “paint.” and then a paint brush. I got these cute little trays off Amazon and they are a great size to hold the vodka/gold luster dust mixture. 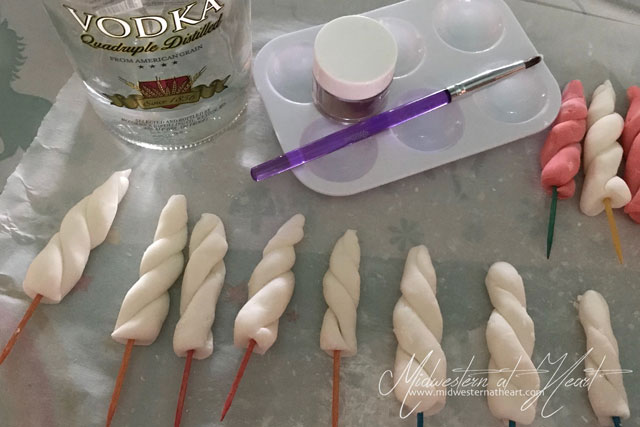 As I started painting them… I really thought I liked the white better. Oh, you see pink in there do you? Well… Hubby walked into the kitchen when I was pinching off some white and dropped the rest on the floor accidentally. Was it his fault? Was it my fault? I don’t know, all I know is I dropped the rest of the white on the floor. Luckily I kept the leftover blue and pink from making the ears in case I needed them and I did! 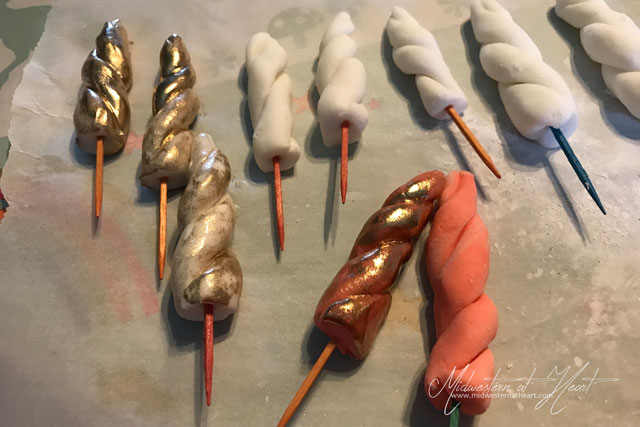 I mentioned I got 12 cupcakes of each flavor above. If you count there are only 11. Well duh! we had to try one of each. I can’t serve something that doesn’t work, right? 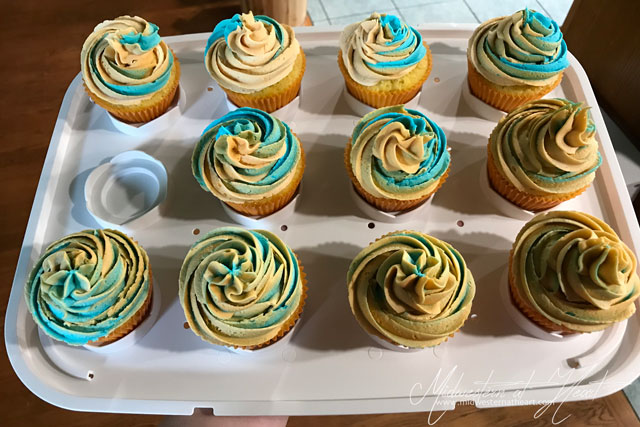 The colors… Amanda recommended adding a little orange food coloring to the icing of the orange creamsicle to help people set their brain for what they are about to eat. I picked a complimentary color… blue. Then for the cherry limeade, I have a friend who is allergic to red food dye. So I tried to steer clear of red in case she came down. I would hate to make her sick. Abug had picked yellow for the creamsicle ones and I didn’t want orange and yellow together so I decided to use yellow on the cherry limeade cupcakes. And a good complementary color is purple.

I then laughed and hoped that my Red Coater buddies wouldn’t disown me since blue and orange are Broncos colors and Yellow and Purple are Vikings colors. Whoops! But I thought those color combinations were beautiful together. 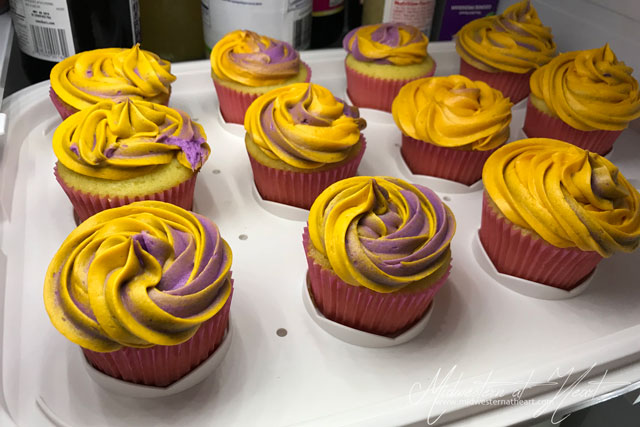 I hate that these pictures don’t do the cupcakes justice. They were sooooo adorable, in my opinion anyway (IMO for Jody… haha inside joke to a text message today). And while I thought they were adorable, people at the lake agreed with me! 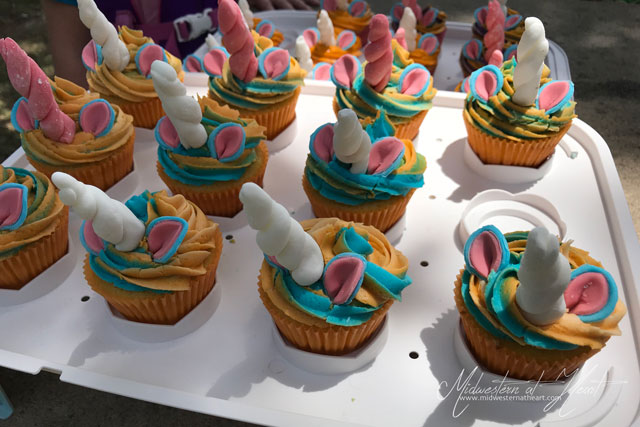 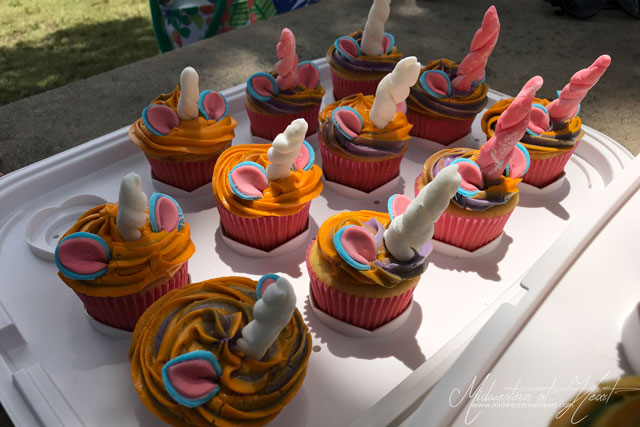 Now… this was American buttercream on the cupcakes. American Buttercream is basically butter, sugar, and flavoring. I have a double-decker cupcake carrier (similar). I couldn’t put the horns on the cupcakes while all were in the carrier so when we got there I quickly put them together. So, I thought I’d put the dome over one set of the cupcakes to keep the flies off of them, etc. Big mistake, big, huge, I have to go shopping now… oh wait, I shouldn’t channel my inner Julia Roberts here…. (Pretty Woman with the dress saleswoman…). 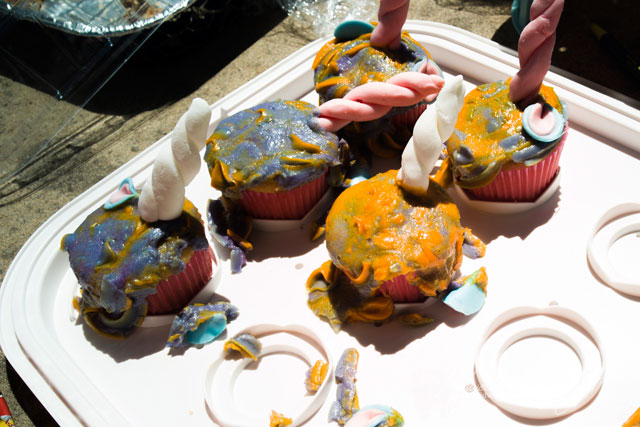