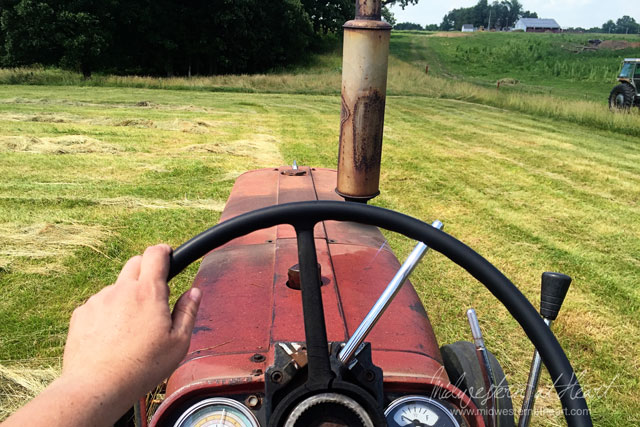 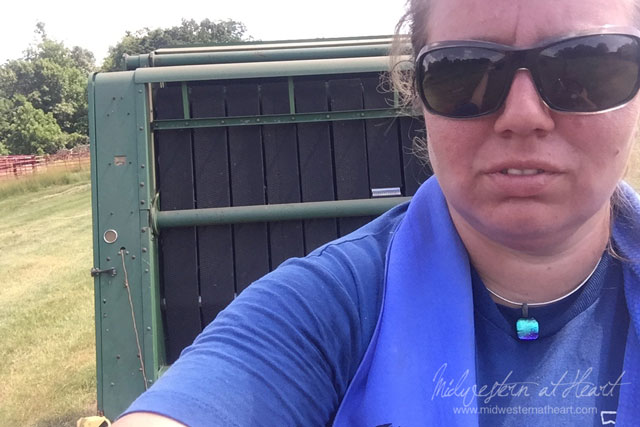 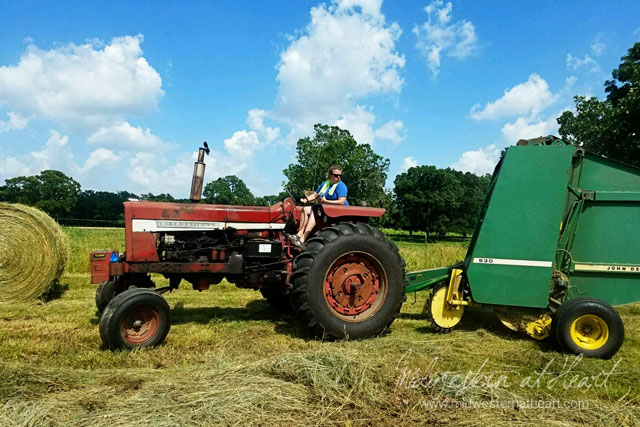 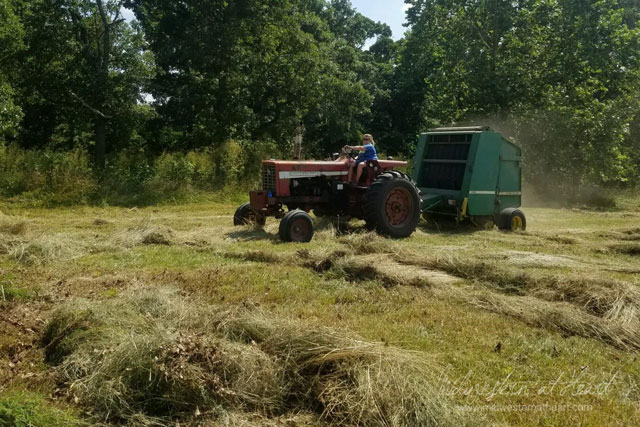 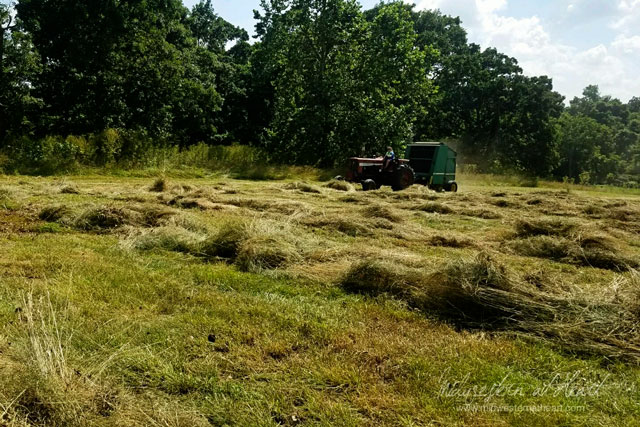 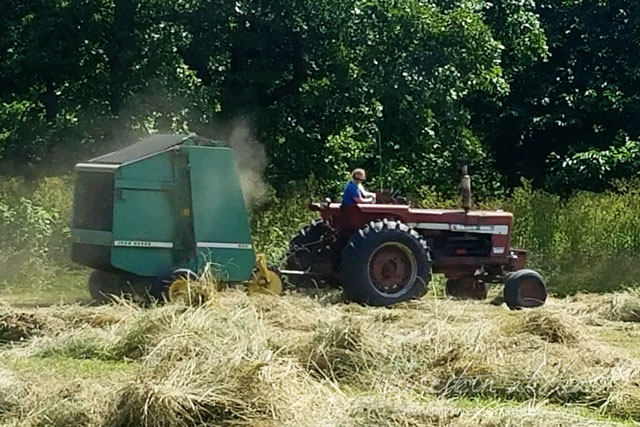 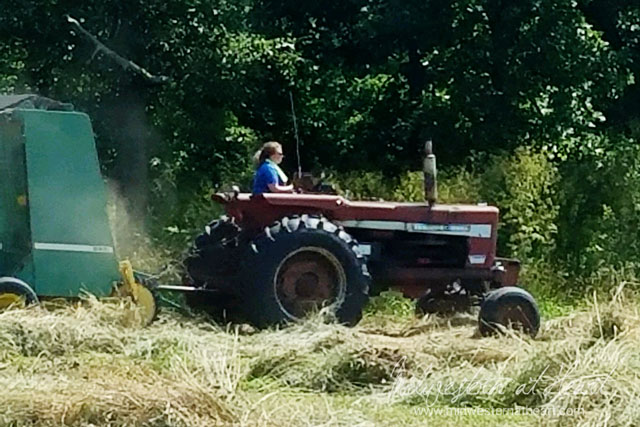 Did you know it’s hay season? Yup, hay season is in full swing and pretty much has been since June 1st in this part of the country. It was funny, the hot weather hit and everyone started mowing hay. In fact, I have to go help pick up 100 square bales tonight. But last week I worked on round bales. It takes a tractor to pick those up… I’m not freakishly strong or anything.

Last Friday I went and baled hay for dad. Thursday night when dad and hubby got off work we all worked on raking/baling hay until the dew set in, got the hay a little damp, and killed dad’s tractor. The big tractor wasn’t running right, needed a new alternator so we hooked dad’s tractor up to the baler. She works like a champ with the baler but for whatever reason she stalled out and well… she’s a 47 year old tractor… so when she dies, you have to let her cool off before she’ll run again. And I have no idea why I’m referring to the tractor in the female sense.

Boy was it hot that day! Mom sat in the field in the truck with Tbug and Abug in the air conditioner (for the girls). Karen and Jared showed up to help. Karen helped dig out a few baler clogs I wound up with, but I got the hay baled. In fact, I got done just in time for dad to come home from work, change clothes, and come to the field to road the tractor home. Perfect timing huh?

Now I wan’t to put out a Public Service Announcement! If it weren’t for farmers/farm machinery, the world would not run because farmers produce your food. I love when people say their food comes from the store. Well, how did it get there? Trucks. Where did the trucks get it? Factories (or whatever). And that came from where? Oh that’s right, a farmer.

Earlier this week a 62 year old man in Strafford, MO was killed moving his tractor either home or to the next field, whatever. A semi went to pass him, hit him, and killed him. I know we all have busy lives and are in a hurry these days, but please be courteous to farmers! They are doing their job just like the rest of us except they don’t usually work 8-5.

Dad’s baler doesn’t have a slow moving vehicle sign on it anymore, fell of sometime within the last year so I ran interference, meaning I put my 4-way flashers on and followed him. The tractor at top speed runs 15 miles an hour and because they made one of the roads out by our house an interstate, we now have to go the way long way around. Fun times! So I was on the back road and a Highway Patrol got in behind me. I won’t lie, that always makes me nervous, not because I’m doing something wrong, but it just does.

There was a car behind him. I would bet the Hi-Po followed me for every bit of a mile or so, I figured he would pass when he had a chance. He didn’t. But the guy behind him passed the Hi-Po, me, dad on the tractor. Then I saw the lights go on. I thought oh crap what did I do but the Hi-Po went around me. I thought crap is he going after dad? Nope, he went around dad and got the guy who flew past us. I would also like to mention that we had maybe at most 20 yards before we were turning off, now none of the people behind us would probably know that but… I would like to know why the Hi-Po actually pulled that man over, but at the same time it is nice to know that someone was on our side.

Dad and hubby in the past have been flipped off, cussed out, tried to be run off the road, and everything else because we’ve had to move farm machinery. The big tractor runs 20mph at top speeds and the other tractor runs 15mph. I know we’re all busy, trust me, farmers are trying to get everything done in their allotted time too, so next time you go to flip off a farmer or cuss him out, remember, he’s working hard to keep you fed.