Before we got home from Cozumel I made sure to grab everyone’s pictures, especially those underwater since I didn’t take many myself; I focused on diving and getting that under control. Ocean diving is different, way different, than fresh water diving. Anyway there were 394 photos I had to go through for Friday’s dives. And I believe I actually took a few of these… Go me, right?

On our ride out to our dive sites, underneath the boat deck it gets a little warm. I wouldn’t want a boat without one though because it was great during the real heat of the day to get away from the sun. In the morning though, it was nice to sit out and get the air and water hitting you in the face! 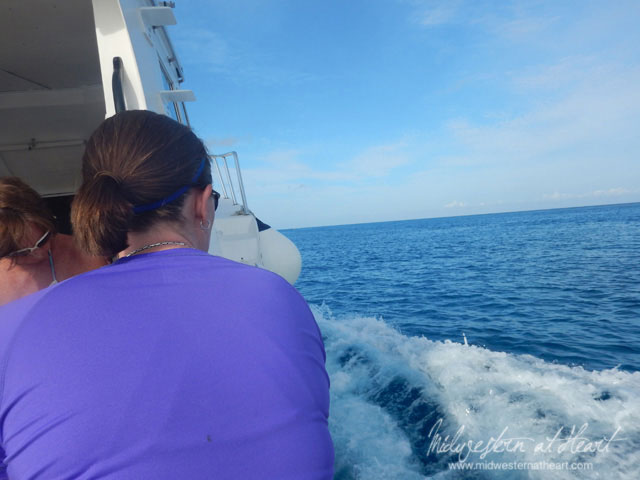 One day Grady used the ladder (behind him) as a drying rack, the next day he let it “air dry.” 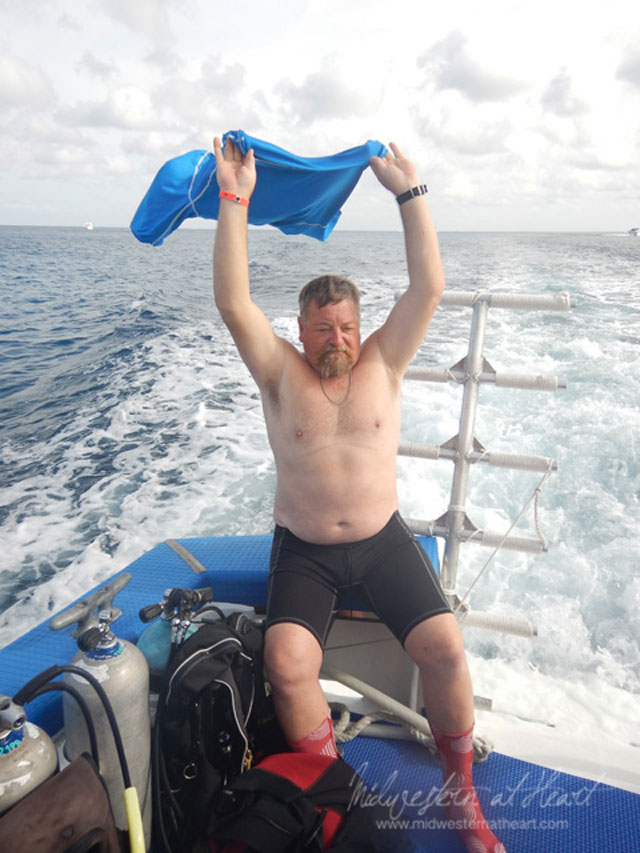 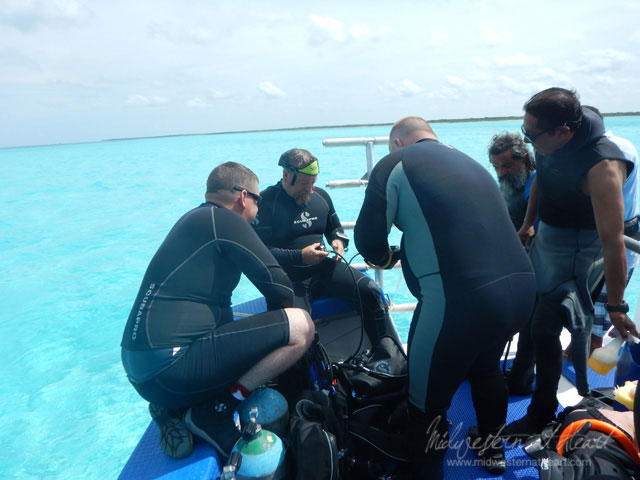 Our first dive of Friday was Devil’s Throat. It is a tunnel that starts out at 90 feet. When you come out you’re between 125 and 135 depending on if you come out toward the top or bottom (is what Grady said). Hubby really wanted to do Devil’s Throat but at the last minute decided he shouldn’t. (he’d gotten sick the day before and getting down that day he didn’t feel great. It is always best to call a dive before making yourself sick). I had talked myself in to doing it (even though I was nervous) until I had issues. We fought some current getting down, then my mask fogged over, and I lost Deb & Jared who were the two I was following, so I stayed with the group that went up and over Devil’s Throat. So these pictures are from those that actually went under. I didn’t have my camera with me as the depth is 100 feet and if I’d have done Devil’s Throat I’d have succeeded that… so look at Devil’s Throat at Punta Sur. 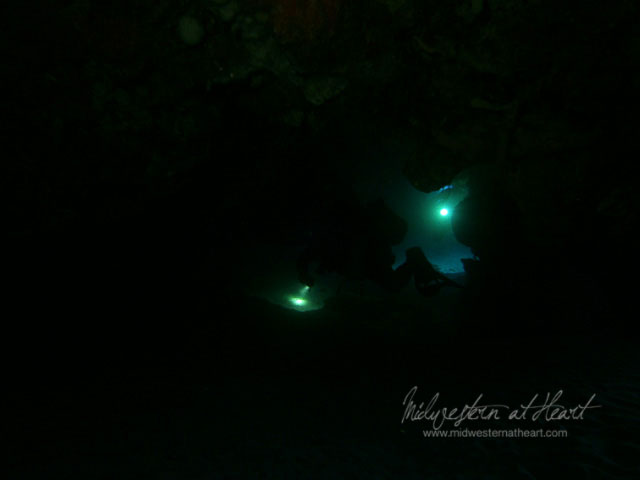 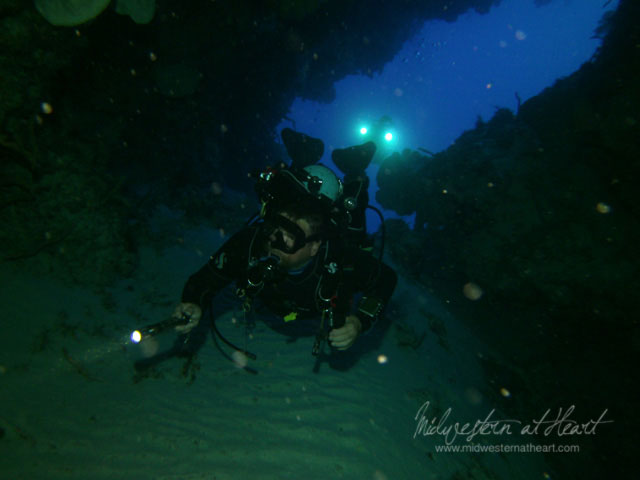 Now when you’re going up to the surface 3 things to keep in mind.

I was pretty sure these safety stops were going to do me in, only because I kept floating up. As long as I got my 3 minutes going and then went below 15 feet I was okay, if I didn’t get back between the 15 and 20 feet mark, I floated up up and away. I kept getting pulled back down because for some reason I wanted to hover around 10 feet if I didn’t float all the way to the surface. ugh! I’m sure I was annoying to everyone (including myself) 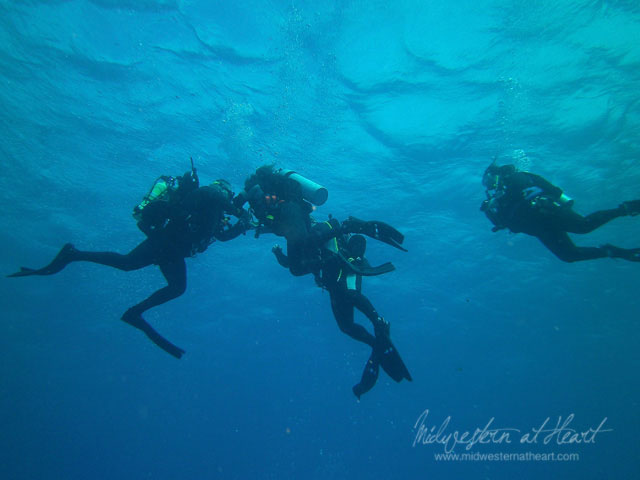 Then you do surface intervals. During those, we ate. The boat provided Pineapple (with chili pepper powder to put on it, yum would have never thought of that!), cookies, and one day another fruit, a different day jícama (pronounced: hick-a-muh). There was a big joke that jícama was an afrodesiac because Cezar (the videographer) eats a lot of jícama and has 6 kids. Jícama tastes a lot like uncooked potatoes or something of the sort. I think the other fruits we got were papaya and mango and maybe Cantaloupe…..

This day on our surface interval we were in about 30 feet of water. One of the guys was pointing out what could be starfish and said this is the area where starfish come to gather so a bunch of us jumped off the boat with our mask and fins and snorkeled (minus the snorkel… except Doug, he had a snorkel).

Now Note: a Snorkel is usually part of dive equipment for helping to swim across the surface but our group typically doesn’t dive with a snorkel as part of our rig.

This is Doug. The backwards mask is correct. Unless your mask is on your face, it should be turned around backwards. Pushing it up on your head (like you would goggles) is actually a sign of distress. I just thought this was a funny picture because his camera lights look like antennas or something. 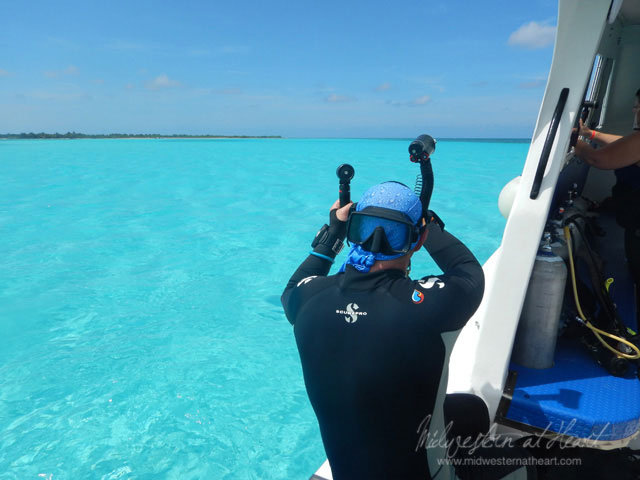 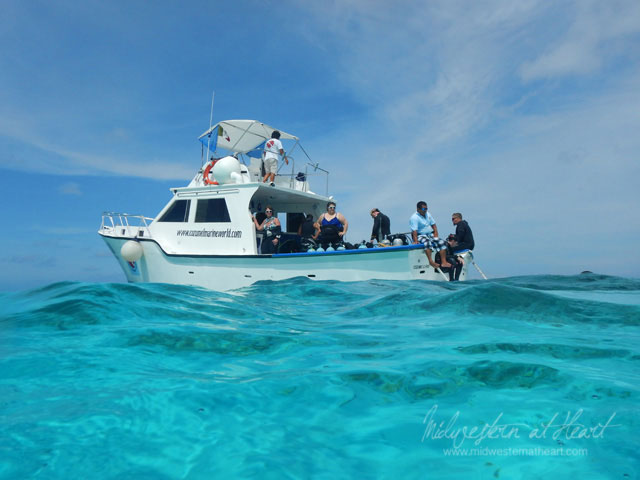 While we were “snorkeling” Doug found this little shark. He couldn’t have been very big to fit in that small reef. I actually took the picture. I was the one with my camera out 🙂 Woot woot, look at me go. ha! 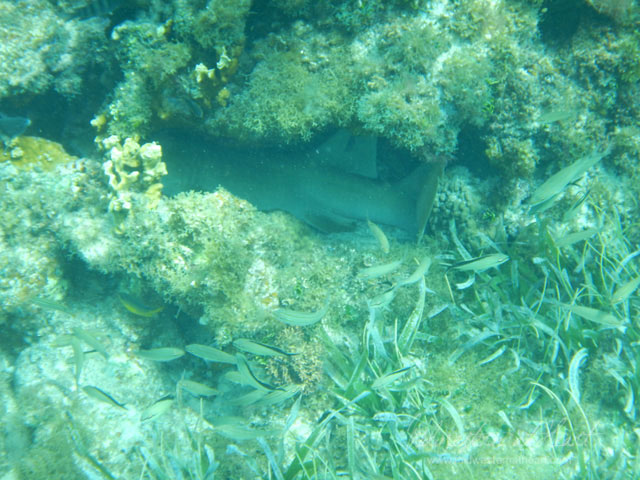 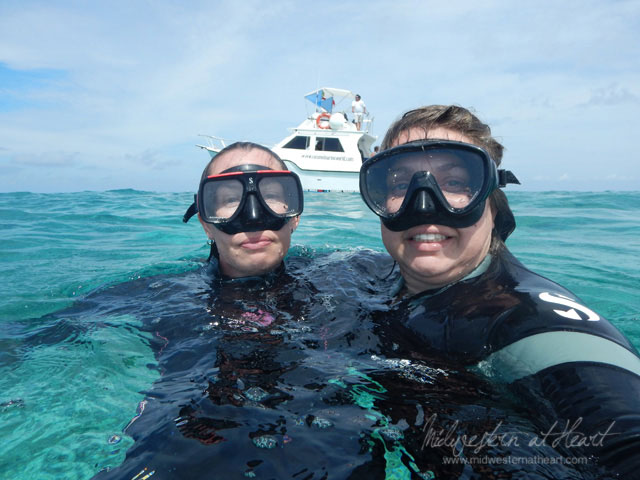 After our surface interval, we were back at it. 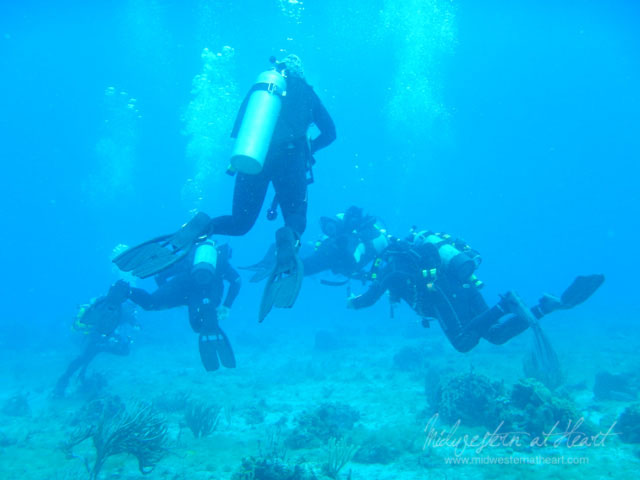 I got ahead of the group a little bit, looked back at the reef and thought seeing the bubbles coming up from the reef was really cool. Know that I was with the dive master, so I wasn’t ahead of the group, they were just stopping to look and take pictures. 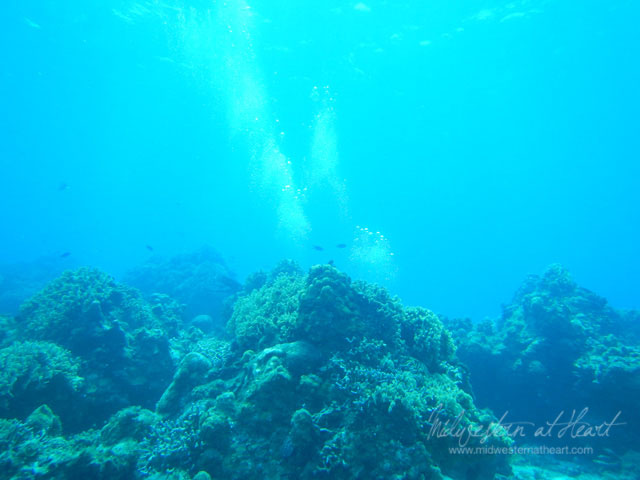 So there was this all over the ocean floor. I never did touch it because it looked like cat poop in kitty litter to me. No one could tell me what it was, but doesn’t it? 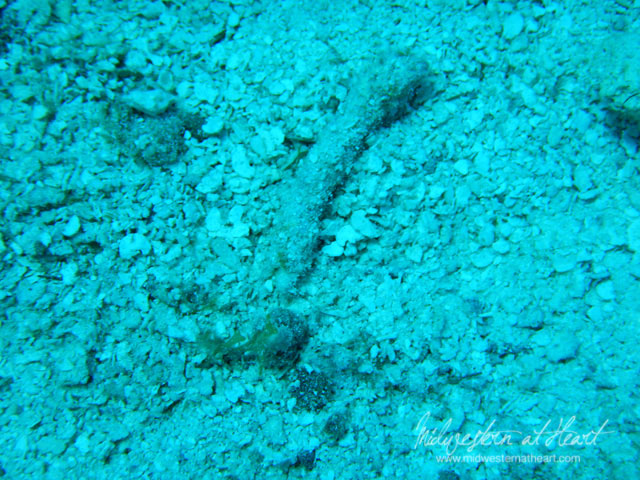 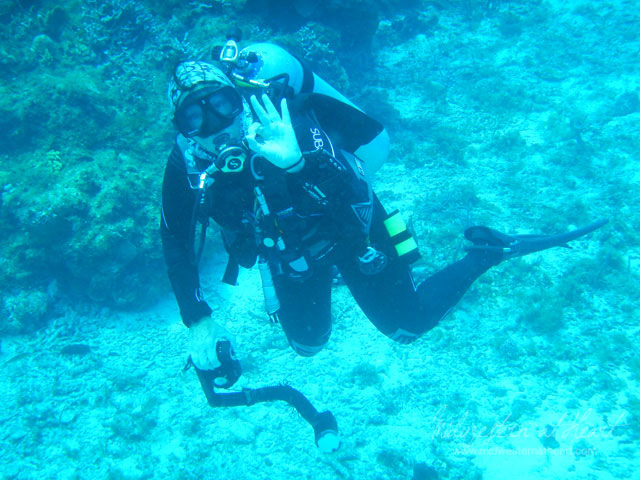 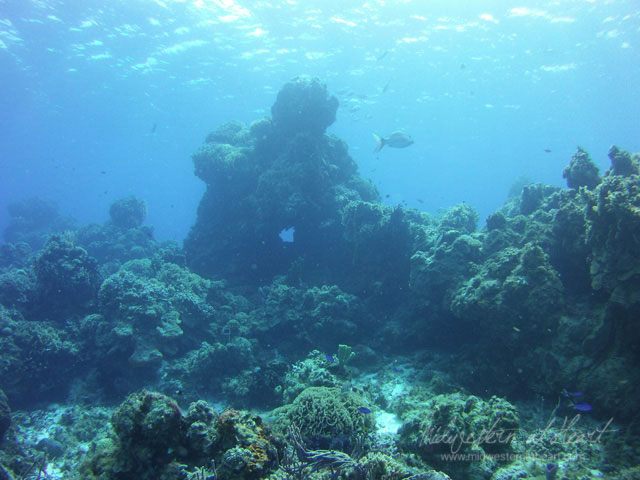 Sadly I didn’t see these next two figures, but someone had fun, that’s for sure! 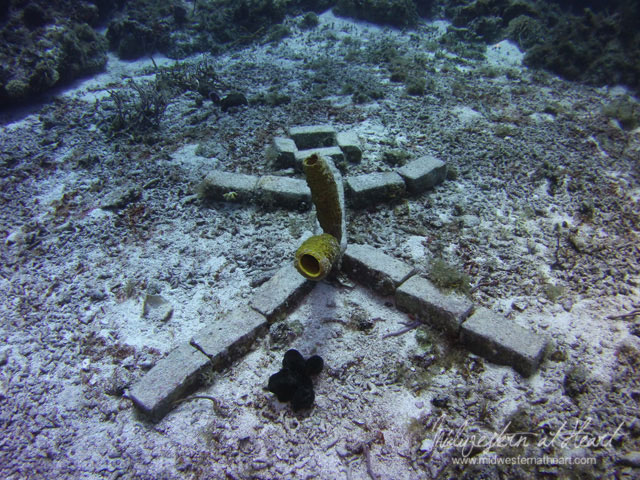 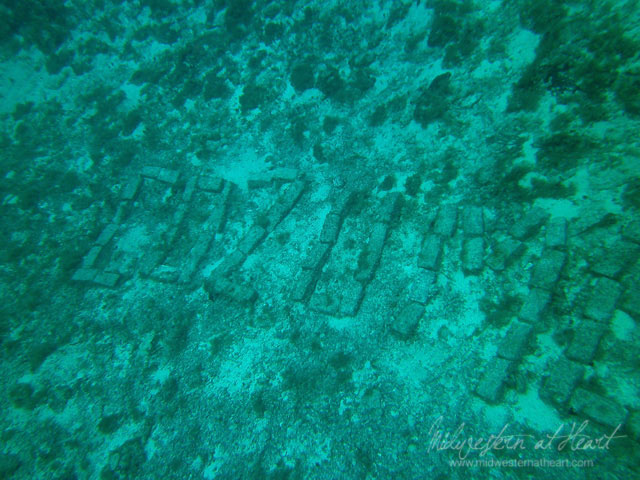 Rachele had to get out of this turtle’s way. He almost smacked her in the face. 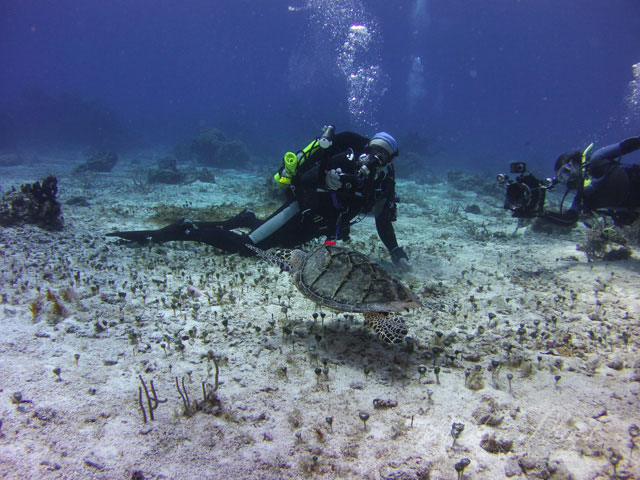 And this guy was PO’ed beyond measure. It is an Eel. Normally them opening their mouth is just breathing but this guy was pissed. He actually came out from under his coral and moved reefs. Someone said they’d never seen one do that. He almost ran into one of our people too. 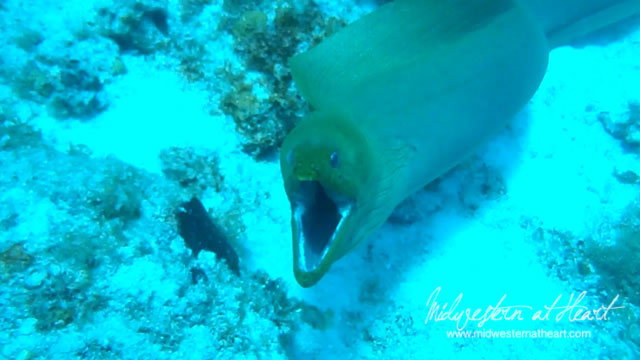 This is a conch egg or so they tell me. I hope they weren’t trying to see if I was gullible because I seriously don’t know what it is. When I googled it, there was one that looked like this that came up…. 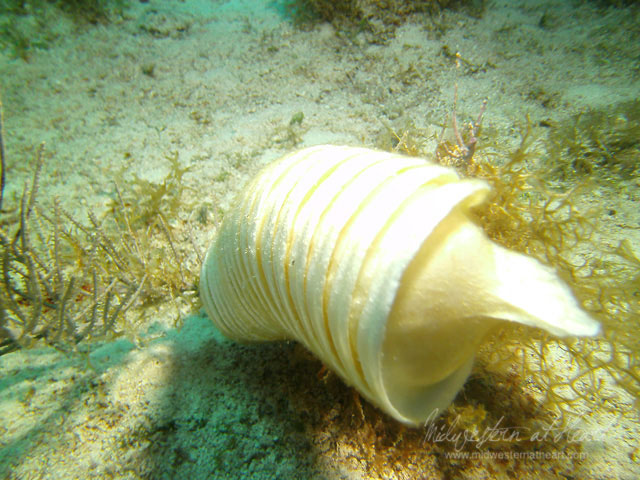 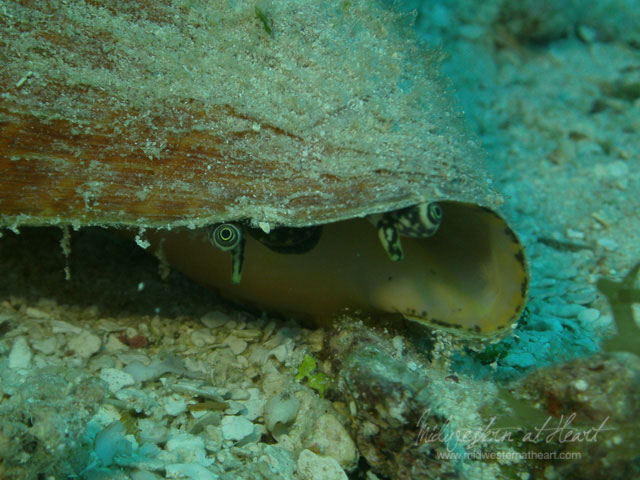 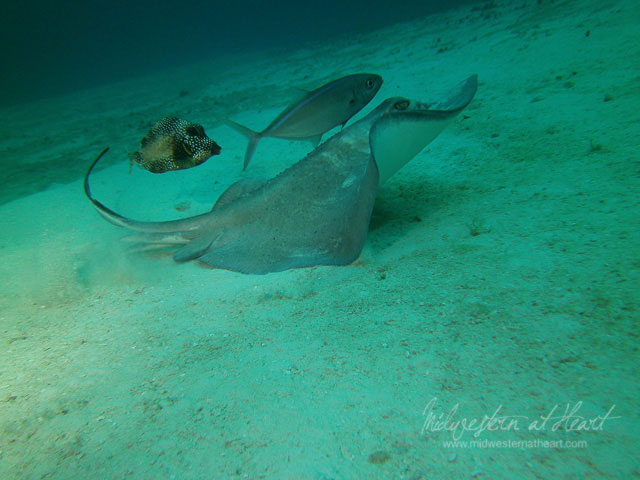 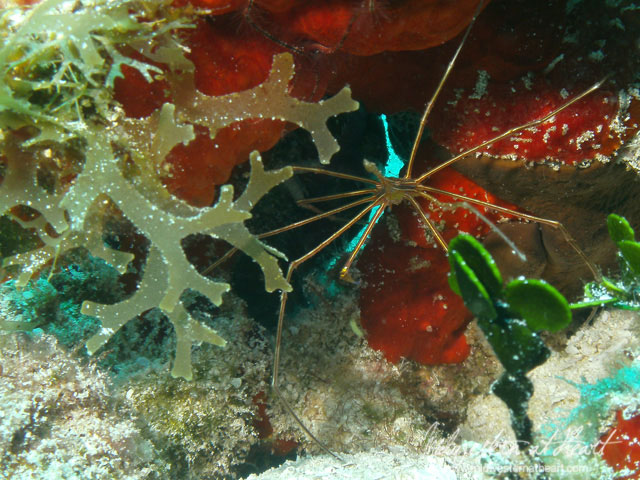 And those were our dives. On the Dive boat once you’re headed back, there is a garden hose you can rinse the salt off of you and your gear. Grady and Deb said that when Cezar came to the island 20 some years ago he was clean shaved and clean cut. Now he has his “island look” which is long hair, long beard. Well he was rinsing off with the hose and Clemente thought he’d help with some soap. Those two teased and teased each other. And finally Clemente said he’d stop with the soap and help rinse the soap out and continued to put more soap in. We laughed and laughed. 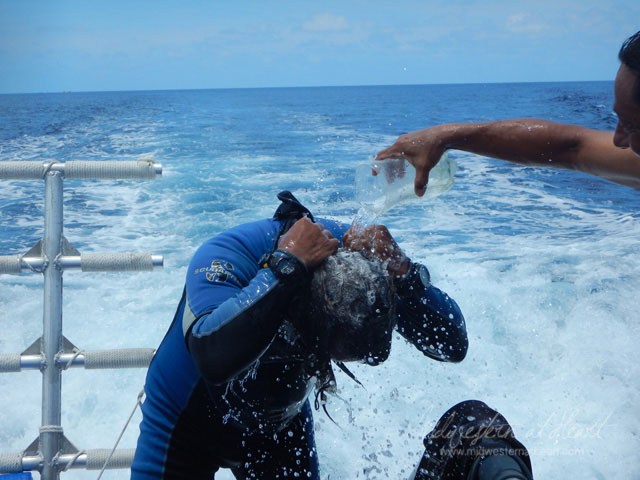 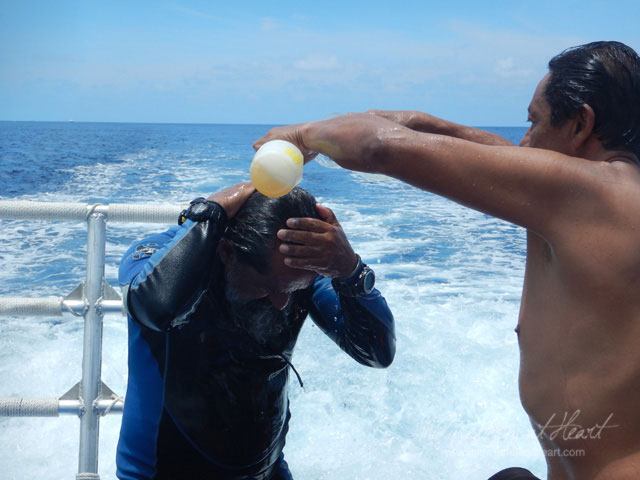 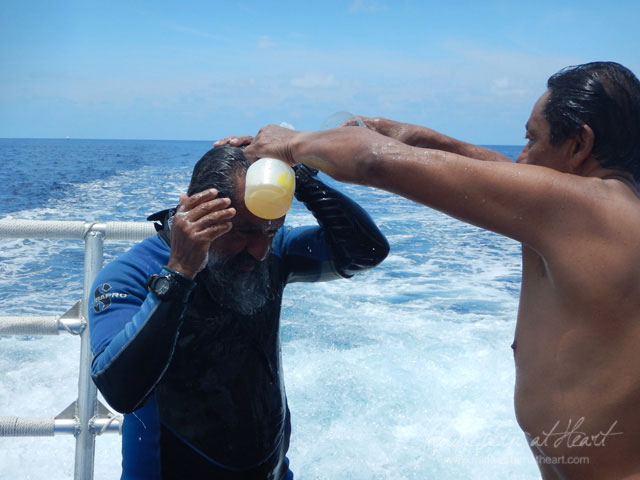 Off in the distance is this building. Shirley (not on the trip) calls it the cow udder building or says it looks like a cow udder. There are 4 points that come off of it and it really does look like a cows udder. I told Deb they needed to call one of their trips something to do with that. 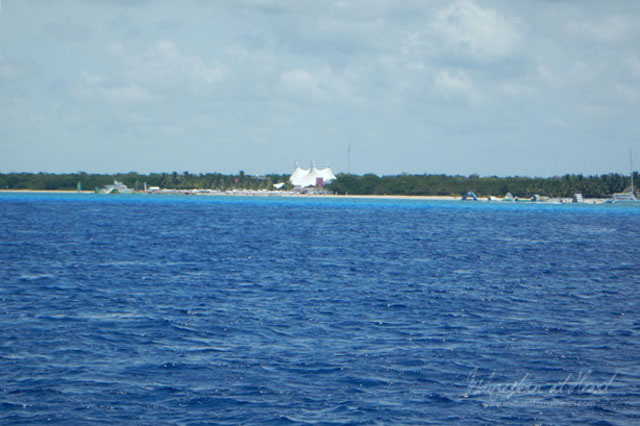