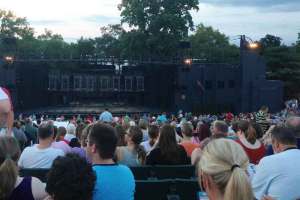 We were woken Wednesday morning by the information that there was flooding of rivers along I-44 and around and south of Rolla the water was actually over I-44 and the interstate between St. Louis and home was shut down.  They were having to reroute people around the flooding, and when your major interstate is flooded, that’s…. fun!  I was wondering how we’d get home, luckily we had a few days for it to recede.

While we were watching the News and searching the internet, we decided to eat leftover pizza for breakfast so once we were up and dressed, we weren’t all that hungry, so we decided to get Cold Stone Creamery for lunch.

From there, we decided to head to the outlet mall we found while we were doing some google searches.  As we were headed down the highway we saw this interesting vehicle… Not sure what it was but I sure would have liked to have known!

We finally made our way to the Outlet Mall which I’m happy to say it had outlet mall prices!  Score!

While we were there, we saw a nail place so I suggested that hubby and I get pedicures.  Come on, the main reason to get one is the foot rub!  How girly is that and NO he didn’t get his toes painted :).  haha.  I love my husband soooooo much!

Finally, around 5 we decided to make our way back over to Forest Park where we were going to attend a Broadway Musical, Westside Story.  Our tickets were at Will Call.  And One cool thing about this, if I haven’t already mentioned it is, there are 1500 free tickets set aside so that everyone can attend the musical!  How sweet is that?!?!  St. Louis doesn’t want their people to say my kids aren’t “educated” because we couldn’t afford it.

We finally found rush hour traffic but still, it wasn’t totally unbearable.  Not that I’d want to drive in it every day or anything but still…

Once we got to Forest Park, we decided to turn around and go eat, then we’d come back to the theater.  It was busy and why take the time to park because once you got parked, you didn’t want to give up your parking spot.  So we left and went to eat at P.F. Changs which was about 4 miles from there and then came back.  I giggled because we wound up on this road in the park and it was bumpy as all get out.  The worst road in the city so far by far 🙂

We parked more up by the Zoo and took a nice stroll down to the Outdoor theater.

Hubby went to get our tickets while I stood out of the way trying not to get run over.  You can’t imagine how many people were there. 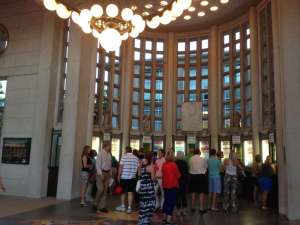 And I was entertaining myself 🙂 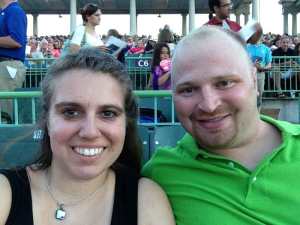 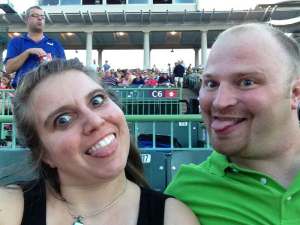 Then at intermission, I decided to entertain myself again.

The musical was fantastic.  If you ever get the chance to see Westside Story, I suggest you do it!

Then we left and we both were having Sweet Tea withdrawals.  I’ll say, that’s the one thing we had a hard time finding in that city… Sweet Tea.  Finally, I said, hey, I’ll bet McDonald’s has their famous Sweet Tea.  Sure enough, they didn’t let us down!  Whew.  It was touch and go there for a minute… lol :).

Halloween
Happy 4th of July!!!!
A Little Dab of This, A Little Dash of That
Lone Star Steakhouse - Branson, MO