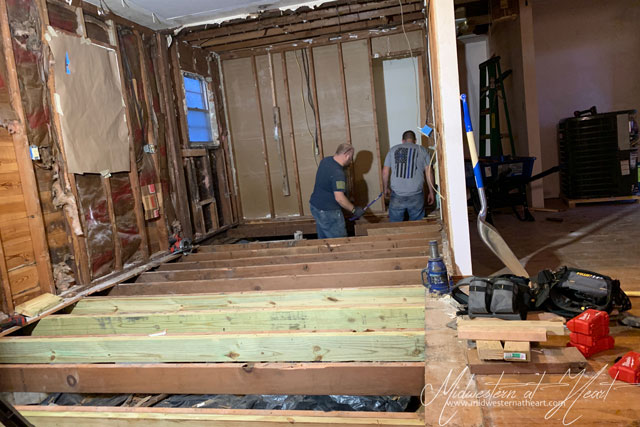 Everyone is all talking about Christmas and Holiday Home Tours and I’m over here like wait, WHAT?!?! I want to do that. Oh, wait… I can’t. Why? Well, look above. Do you know what you’re looking at? If not, I’ll tell you… It’s my open concept bathroom/Kitchen. Why put a wall between when you can make them one and take a shower while stirring something on the stove, right?

I’m kidding… sort of… I’ll explain. Right here on the left side of the wall (look for the shovel leaning up against the wall on the right side…) you really are looking into the kitchen and bathroom. And there really is no wall separating the two. They always say be prepared if you plan on doing something like this because you don’t know what you’re going to find. Well, what we found was there was a leak for what appeared to be YEARS in the bathroom where the bathtub/shower combo was and the floor was rotted. In fact, the wall behind where the window is was rotted all the way through and you can actually see the back side of the siding through the house. That’s not normal. Nope, not normal at all.

Initially, the kitchen floor wasn’t going to be pulled up, just the bathroom floor. Then I left to go on the hunt for something and when I came back, the kitchen floor was completely gone. I walked in and they joked I was going to start crying. Well truth be told, it was in the initial work that it would be pulled so it really wasn’t as much of a shock as just I left and came back to it gone.

It was a good thing we tore up the kitchen floor because we had to jack up the house. It sagged a bit. Because of that, off to Lowe’s, I went again. Did you know that if you are military or a veteran they give a discount? That’s awesome that they want to give back to those who serve this country so selflessly! Thank you! Home Depot and Southerland’s do as well. Good job stores for stepping up. I do have to tell you every time hubby leaves Lowe’s they thank him for his service. It makes me smile.

So when we jacked up the house where it sagged, now there is a slope in the hallway. Ugh! But I told them I was fine with it because… well… when you get into older houses, you can spend forever just trying to get it level and you jack up one area and another will sag. The hallway lope isn’t terrible so I’m okay with it. Really, you can hardly tell. How they saw it I’m not sure. I swear, we start to move forward and something else appears.

Before we had to tear out the wall between the kitchen and bathroom, Jared asked if I finally started seeing it come together… then we tore out that wall and the entire bathroom floor (which I knew was coming) and the answer is… sigh. My father-in-law came out yesterday and he and I went around kind of picking up/cleaning up and after it was cleaned up… it did feel better.

Also, we tore out a load-bearing wall that we found wasn’t supported like it was supposed to be anyway and we put up a beam and braced it and guys, that looks awesome. Plus it makes the house feel a little bigger than it did.

It doesn’t help this week I’ve been sick with a nasty cold… I believe yesterday when I walked in the house and something didn’t go right I said I wanted to throw a 2-year-old temper tantrum but knew I shouldn’t because it would make my nose run even worse and then I’d feel even worse.

So there’s my Christmas Holiday tour… At least I have Christmas lights up on the house! It’s a little festive!