Growing up I’ve been presented with some extremely amazing opportunities.

So what? People get to do things like traveling all the time. Well mine is all thanks to Agriculture. I’ve traveled where Agriculture wasn’t involved yes, but because of agriculture and farm life I’ve had more opportunities and experiences than I could imagine.

Last Friday I got provided with another opportunity because of Agriculture but also because of blogging. The Missouri Women’s Bloggers teamed up with the Missouri Farm Bureau to do a Southwest Missouri Fall Farm Tour. 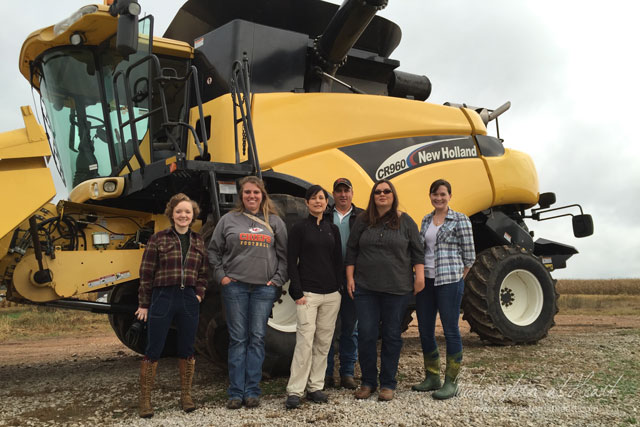 Emileigh from Flashback Summer, Me, Pamela from Thrive Personal Fitness, Trent Drake (Production Agriculture Farmer), Alicia from The Sensible Family, Fawn from Instead of the Dishes.

This is the second fall tour that the Missouri Women Bloggers and the Missouri Farm Bureau have done. The first was up around the Kansas City area.

I met Laurie through other means of blogging last summer, early fall and instantly fell in love with her blog, because well it’s about Agriculture. I pointed her in the direction of the Missouri Women Bloggers and she was actually able to attend the Fall Farm Tour in the Kansas City area. While they were on their tour, they were eating lunch and a local the Chief of Police in the town of Garden City posed the question, why tour farms? (If you want to read about that, you definitely should!)

Right around the time that they were doing their farm tour, I was sitting in my Advanced Technical and Professional Writing class and we were talking about fly over states (hello Midwest) and how people on the coasts wonder what is the point of the middle of the United States.

One of the kids in my class posed the question, “Do Farmers even have computers?” I was taken back by that question. I shouldn’t be surprised that people ask that question. I grew up on a farm and I have lived through a lot of stereotypes in my life. And it really does crack me up when people look at me and say they had me pegged all wrong.

All that to say I was really looking forward to this fall Farm tour. We went to three farms, one was crop production, the second was dairy production and the third was beef production.

While some of agriculture is based off of “old fashioned” practices, other parts of agriculture are based off current technology. (check out that combine above!) Sometimes a new technology or more information takes you back to the old practices and other times you move forward to try new things.

Farming is like any other business. You change according to the demands of society.

The slogan and phrase that gets used a lot is, “No Farmers, No Food.” That’s sad but true. There are those that say you don’t need farmers, just go to the store to get your food like everyone else, but where does that food come from? Farmers.

Here are a few farm facts about Missouri according to the 2012 Census of Agriculture: