Friday night a friend of ours was going to sing the National Anthem at the Joplin Outlaws baseball game so we loaded up and headed over to support her and watch a baseball game. 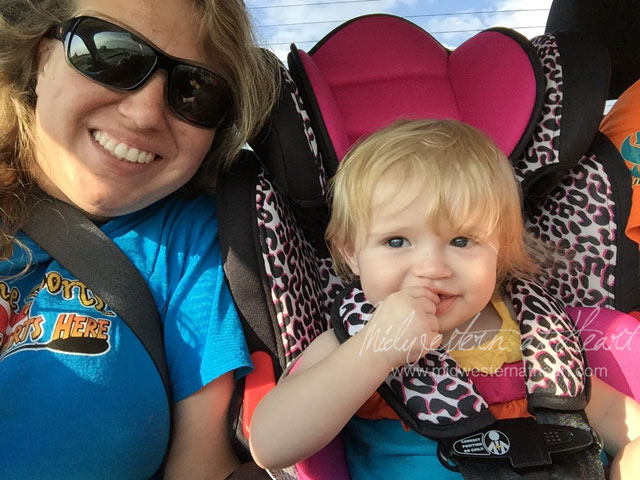 We got there a bit early while they were still warming up. There was a foul ball that came our direction. Our friend De picked it up and tried to give it to CL but he didn’t want it so I said to try giving it to Abug… she wouldn’t play with it either. Weird kids… lol :). 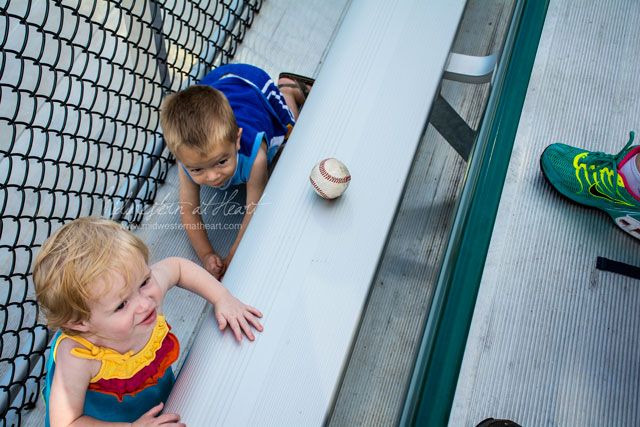 Finally baby squirrel claimed the ball and played with it for a bit. 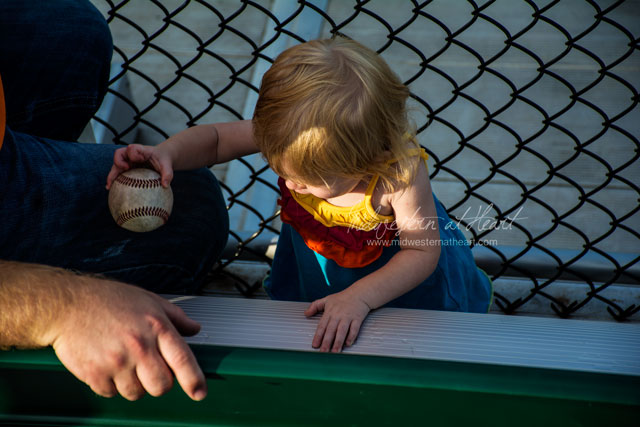 While we were waiting for the game to start and then truthfully after the game started, I was giving Doug pointers on his new camera. He’s been wanting a dSLR and finally got a Nikon D5300. He and his wife Rachele told me I needed to teach him how to use it :). I’m not the master but I’ll do whatever I can, that and I love cameras/photography so yup, I’m definitely willing to help all I can!! 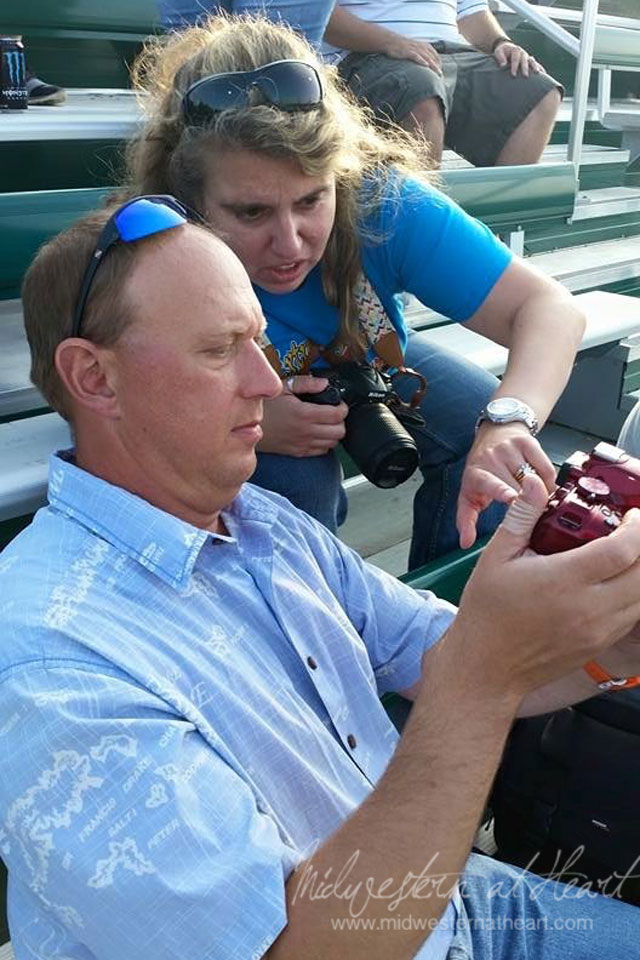 Dani sang the national anthem! Prior to singing it, it we tried to embarrass the heck out of her. So she had her own “fan base” which made us groupies there to cheer her on. I’m serious, there were 16 of us there just to root her on I think. Yes, we embarrassed her. She gave us the Okay sign for above water when scuba diving and then she gave us the out of air sign. Next time we think we should bring a pony bottle to give her some air :). Yes, we might be nuts… lol :). 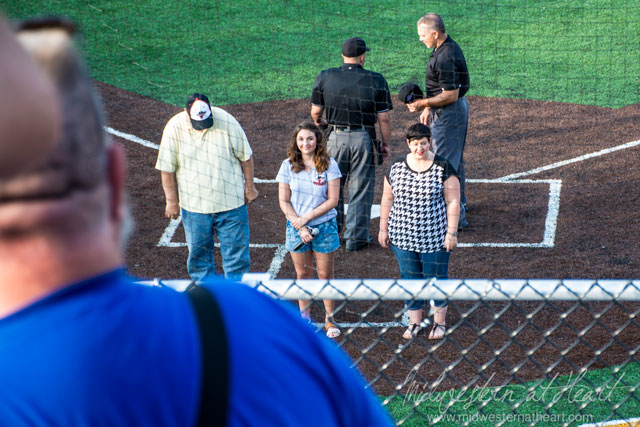 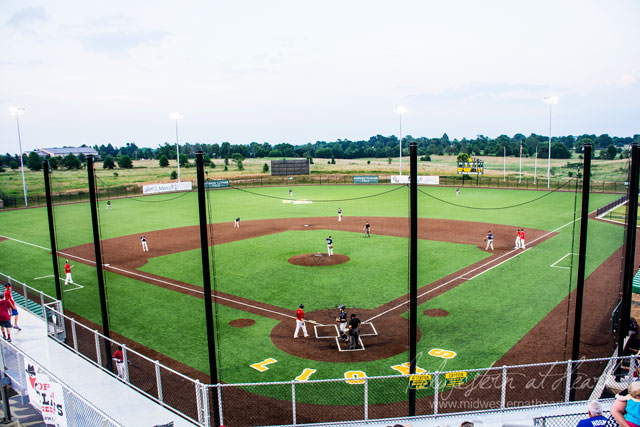 The Joplin Outlaws were playing the Branson Nationals. The Nationals won but it was a great game! 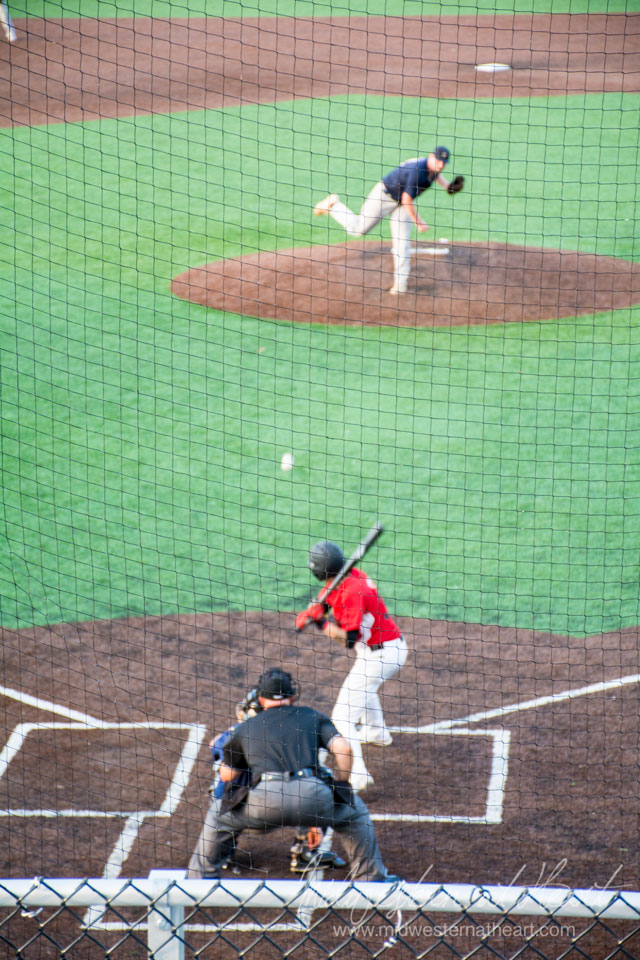 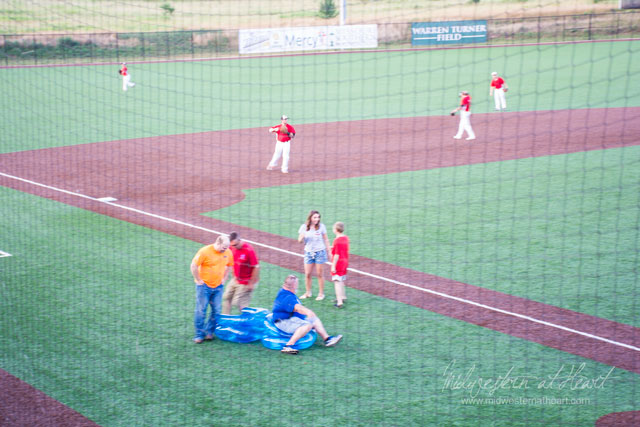 Then it was Dano and Lee. They accidentally stopped at the wrong point in the song once and then once it was time to actually sit in the chair, they popped it! Woops. All three of the guys got 2 free Tacos from Gringos. 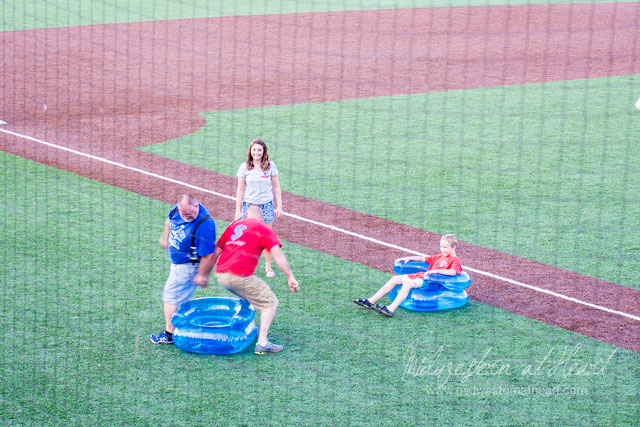 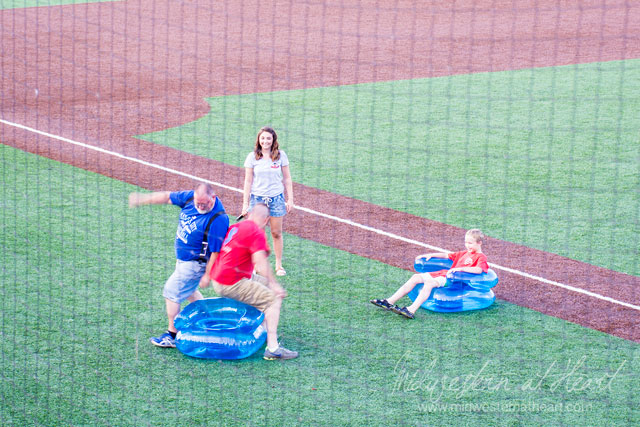 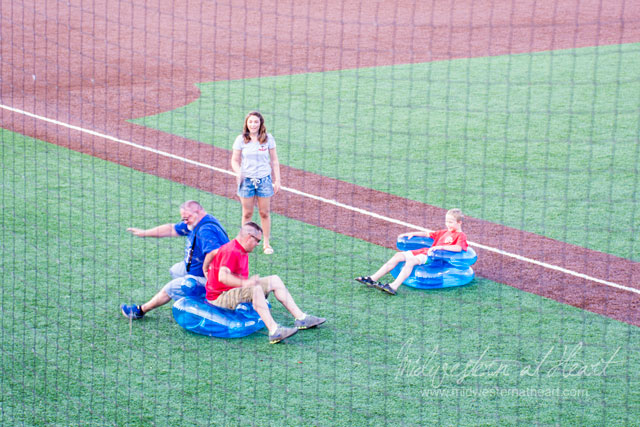 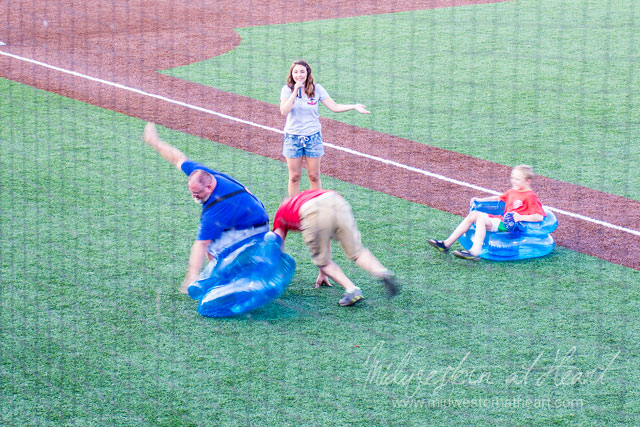 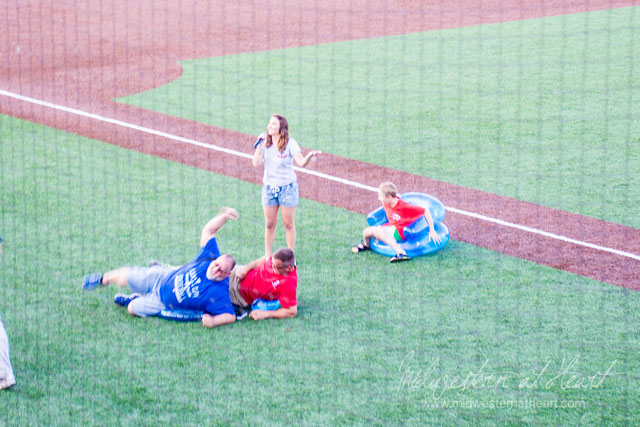 Then they came around with raffle tickets. You could get an arms length for $10. The guys arms that was measuring them out told us that he stood 6’8″ tall. Hubby wound up with 49 tickets that way. Dano got the same amount so we decided that they did a good job of consistency. The winner of the raffle won $96 which he donated back to the Outlaws. 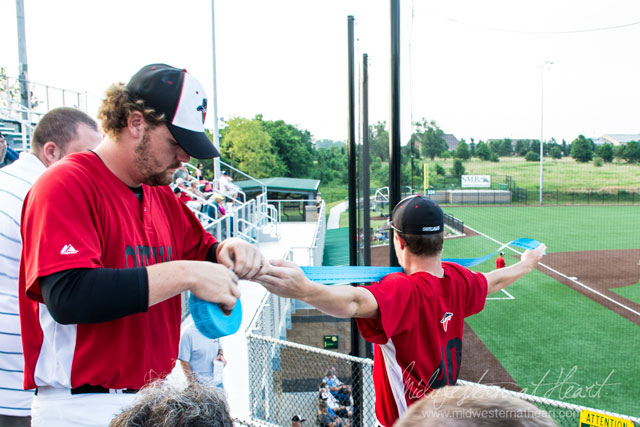 When the game started winding down, we all started talking about how the 3 guys had tickets to eat Gringo’s and we were all hungry because we hadn’t eaten before hand so we decided to head to Gringo’s after the game for dinner. Oh man I’m glad we know the owner and he was there with us… ha! 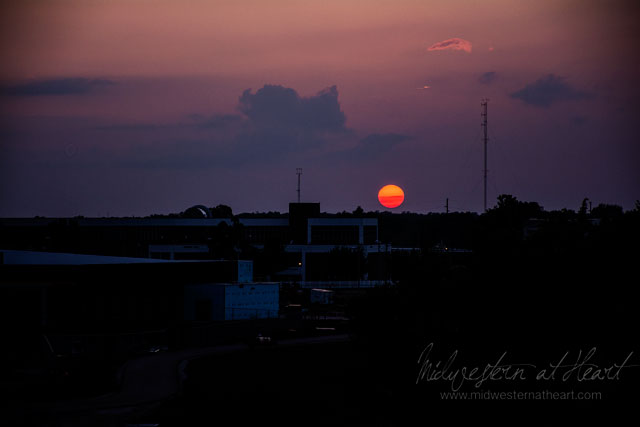 I never did figure out the reason for the fork in the hat… or the receipt on the forehead… I guess why not :). 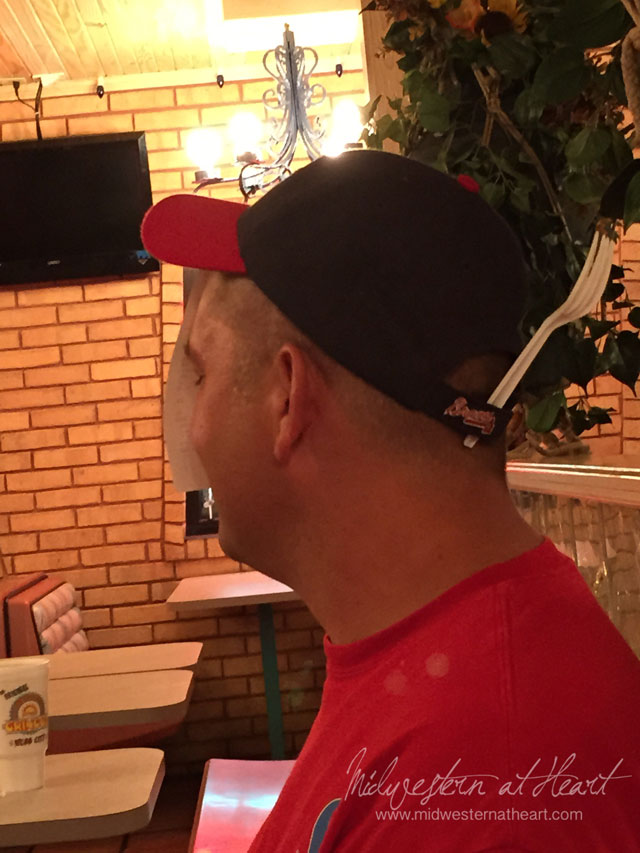 Baby girl has decided she likes cheese enchiladas so we got her that and refried beans on this trip. She loved both. Then we got 3 crunchy tacos, 2 cheese burritos and mini corndog bites. Everyone had extra food left over and we were so stuffed when we left. 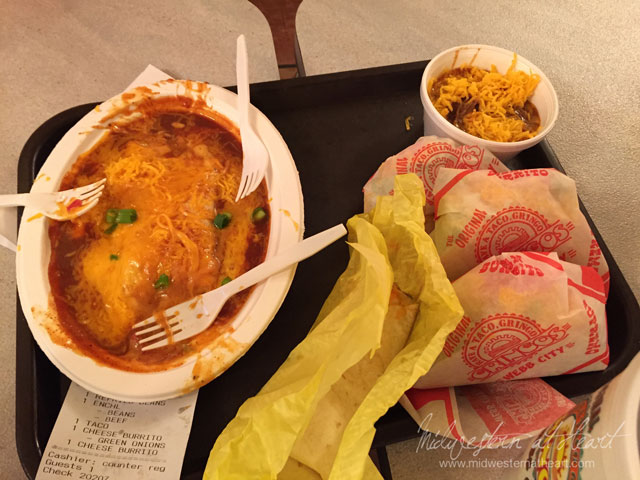 You can’t see everyone. Mom decided I needed a selfie stick. My birthday is July 30th… who is going to buy me one. ha! just kidding…. kind of. 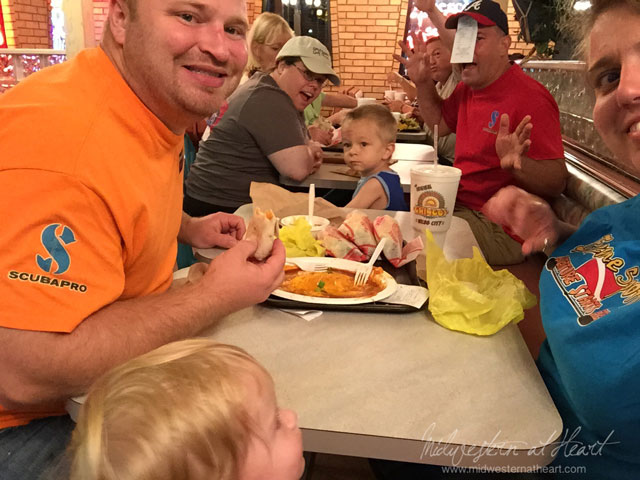 For some reason everyone decided to start piling their trash/trays on the end of our table. Hubby went and threw them all away. The trash, not the trays… just clarifying! 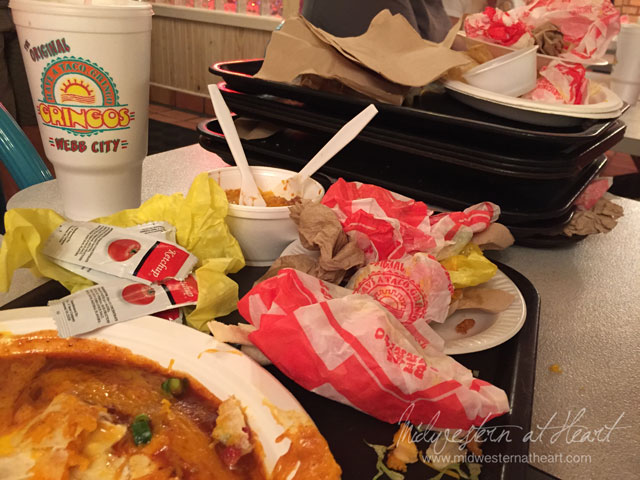 Being as though Chris actually claims us, he had dessert quesadillas made for us to eat. I have no idea what is actually in them, but YUM! 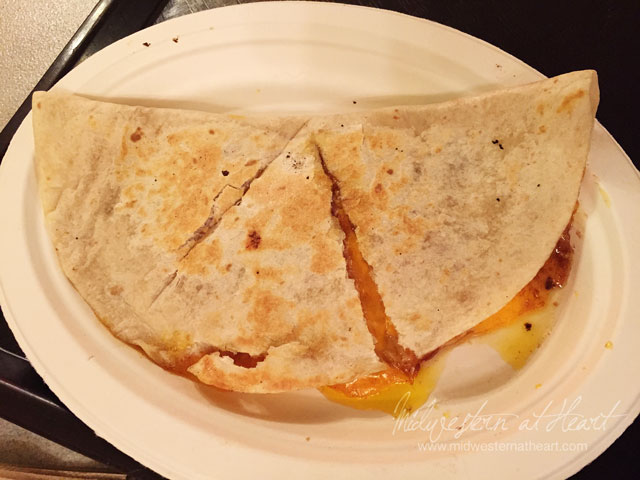 And that boys and girls (Ladies and gentlemen), was our Friday night. Good thing the kids are little enough that they still have no choice but to be seen with us…. Oh and hey, did you know it’s Taco Tuesday? Just saying!

Dressing for the Job You Want...
Two Truths
The Unicorn Cake
One Year Ago... Part IX