Since we celebrated hubby’s birthday Saturday night up in Springfield, Tbug just stayed the night with us and then we took her home Sunday morning.  Well with the time change and all we were all wide awake at 6am.  Hey our body thought it was 7.  So she came and crawled in bed with us and we watched a few shows and then by 7 we were all ready to get up and at least move around.

Tbug had to be home by 10:40 although she could have been their earlier, but I was hungry and so was she so when hubby got up and started getting dressed I asked him why?  I thought it was a fair question :).  I suggested that we were hungry and we started the run-down on all the places we could go for breakfast.

I created a monster {I do this a lot….watch out world} when it comes to driving.  Boy, Tbug sure asks to drive every chance she gets.  But I grew up in the the country driving in a hayfield at 4 years old, I don’t think it’s ever too young to learn. 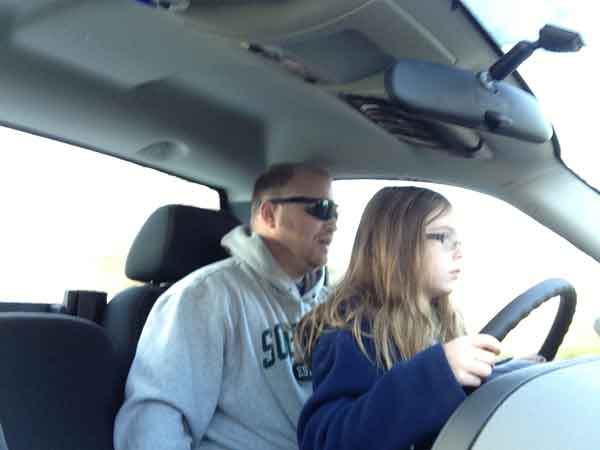 So we decided upon Cracker Barrel.  The fun thing they have going for them is the game on the table.  Plus like most places, if you’re a kid you get a coloring page.  Btw why don’t they give adults coloring pages! 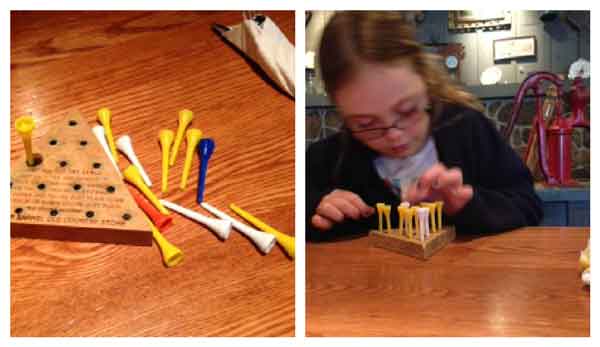 I so get to brag on myself.  I got down to one Tee in the whole, heck yeah!  First time ever!  So had to document it.  Now if I could only remember how in the world I did it!

Funny story, Tbug calls Pancakes “Pantcakes” and I have no idea why {yes, I correct her}.  Anyway she went with the Pantcakes Pancakes. 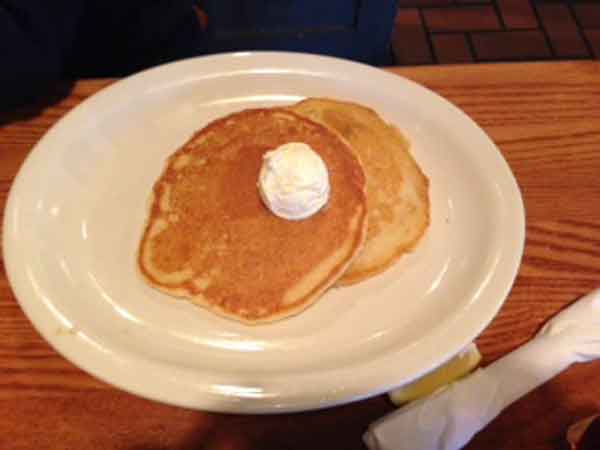 Hubby and I both got orders that came with our choice of Biscuits with sawmill gravy &/or butter & jelly.  I like biscuits and gravy but of course we shared those with Tbug as well.  I don’t need it all and she wanted some, win win! 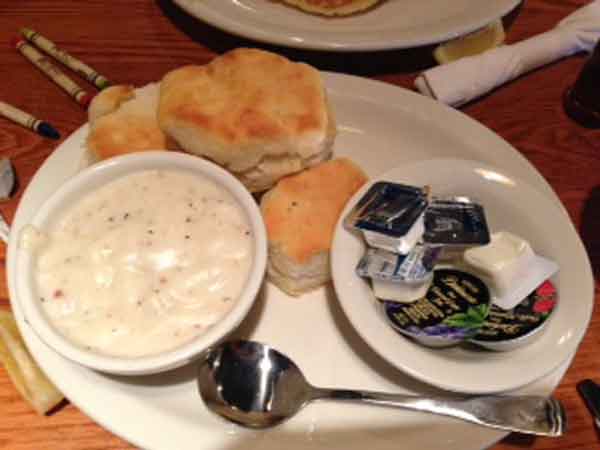 Now Grits are a southern thing.  I’m not sure how you eat them but we all tried them.  At first taste just like that, kind of bland so I added pepper and butter because it seemed like the thing to do.  Now Missouri is considered South or Midwest whichever way it swings in a particular setting, but I’ve never really grown up eating grits.  If you have suggestions on what makes the grits better, by all means share, but we all tried them and they weren’t bad. 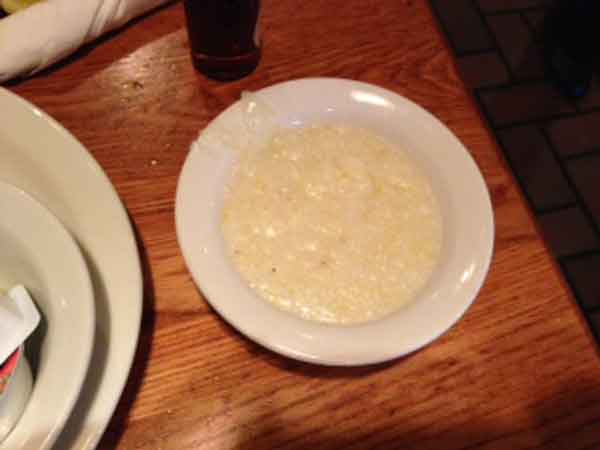 I went with the Old Timer’s Breakfast (no snickering from the audience!) 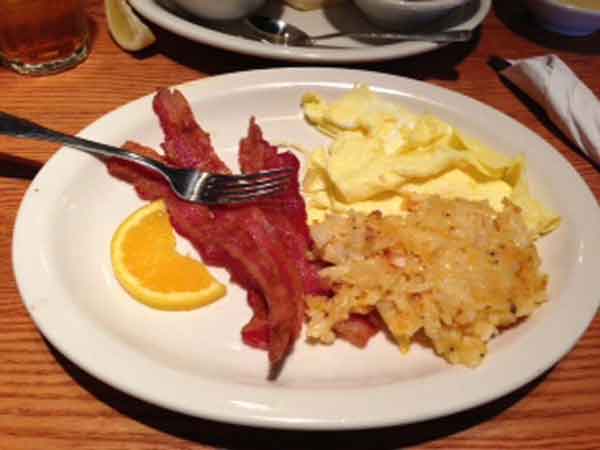 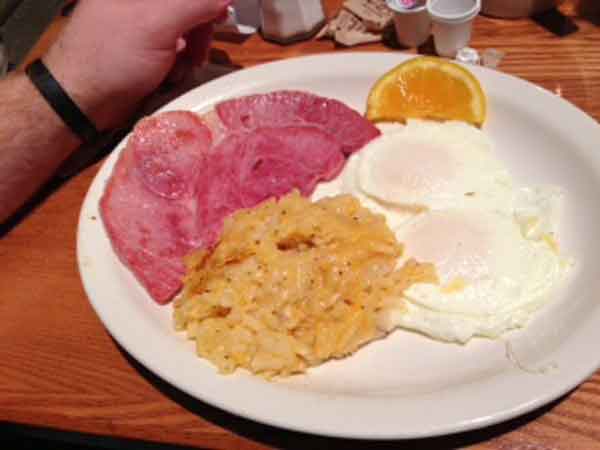 It’s ok we had a big breakfast for 2 reasons…  They always say eat a big breakfast or eat breakfast like a King, lunch like a peasant and dinner like a broke college student.  And 2, we didn’t eat lunch so this was like brunch.

It was a tad bit chilly on Sunday morning so it was nice they seated us right near the fire.  You could actually feel the heat from our seats. 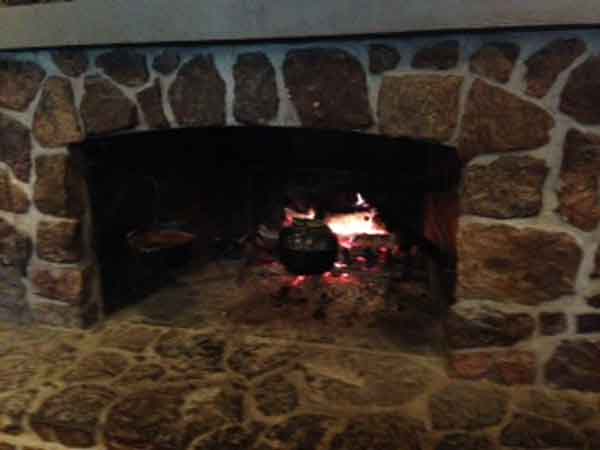 I’m not going to lie this dessert looked mighty tasty but I guess you aren’t supposed to eat sweets like that in the morning so instead we made our way out into the gift shop and look, I spotted Santa!

Hey Santa, I promise I’ve been a good girl this year I want a bike and a horse and a pony and… hahahaha. 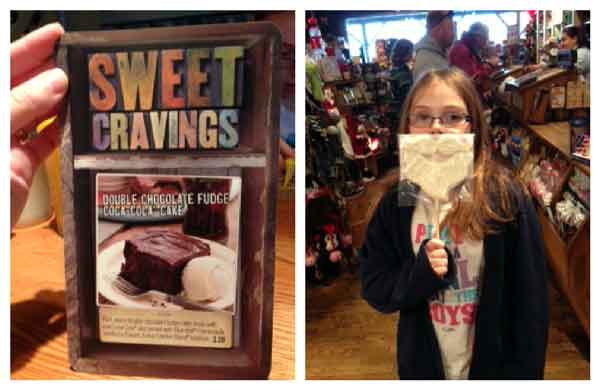 I believe it was actually a Chocolate Santa beard.  Very cool!

Then we found the Sock Monkey stuff.  The little purse we bought for our friends little girl who just loves Sock Monkey’s and her birthday is coming up real so.  Score!  I so wanted the ear muffs for when we’re out running in the cold, btw I need my motivation to come back this week.  And then the cute Sock Monkey hat.

I did walk away with a Sock Monkey travel cup that I keep forgetting to bring to work with me.  Oy!  Anyway I’d say it made for a very fun morning, especially since Standard Time didn’t allow us to sleep in.  How did gaining an hour affect your sleeping habits?