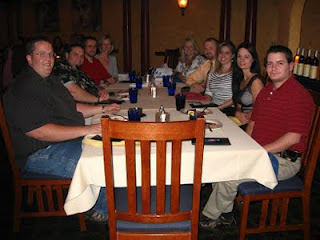 Once a month a group of friends get together and we go try new places for dinner. Saturday’s dinner happened to be at a place in Joplin called Mytho’s Euro Greek Cuisine. It was very good. Some of the specifications used when the restaurant is chosen is they aren’t chain restaurants and for the most part we pick restaurants where we can dress up (business casual or higher depending on the restaurant.) Not always do we dress up, we’ve been 3 places so far that has been jeans attire but still… we like to dress up (or at least the girls, the guys do it to humor us… LOL). This particular restaurant had cheese that they lit on fire at the table and you yelled “Opa”. Jason looked it up and it said it translated to “Your cheese is on fire.” This has been a tradition now for 10 months. Our first dinner out (January) was in Springfield at a place called Bijans. February was at Downstream Casino at Red Oak Steakhouse. March was in Joplin at Kinnaree. April was in Springfield at Avanzare. May was in Monett at Bayou. June was in Joplin at Wilder’s Steakhouse. July was in Springfield at Touch. August was in Webb City at Roswitha’s. September was in Springfield at Haruno’s and of course, this month went back to Joplin to Mytho’s. We have tried many fabulous cuisines… we’ve had Italian, American, Japanese, Euro-Greek, Cajun, Thai, and German. Luckily it has all been places (except for Kinnaree) that I’ve never been to.

I was just excited because I got to see Prince Charming all dressed up. Doesn’t he look handsome? I love it. I think guys look extra good in suits or else in uniform. Well, this is quite a suit but it’s darn close! His birthday is coming up and this was actually his birthday present (the shirt/tie). I knew he’d be having some interviews coming up and he’d need to look nice so I went shopping and found him a shirt/tie to actually go under his suit that I found for him after our last dinner club dinner. He looks super nice in it all. I guess I’ll have to find him a different color once fall is over. That way he doesn’t look all fallish all the time 🙂 but I love the colors and they look very nice on him.