Once we got to Talkeetna and toured a couple of shops, it was time to grab some grub. Wow, I sound so barbarian… grub. haha… Maybe I should say that we spent “so much” time at The Patchwork Moose Quilt Shop that dad and hubby were hungry and tired of waiting. Hubby sent me a text to find the best place in town. I asked Lori where she recommended and her first place was Denali Brewpub followed by a pizza place. Since we had pizza the night before, we decided Denali Brewpub it was. We made it to the restaurant in shifts… The guys led, I was somewhere in the middle and my mom was close behind. haha. 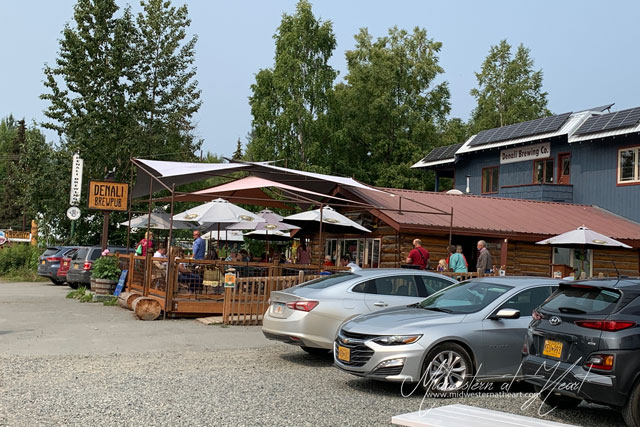 Okay, first off, it was a beautiful day. They had seating mainly outdoors although there was some seating inside. We pulled 2 tables together and enjoyed the beautiful outdoors! It was gorgeous!! The high was 74 degrees. That is actually way cooler minus the humidity from what we were experiencing back home. It was lovely to sit outside in the sun and enjoy! END_OF_DOCUMENT_TOKEN_TO_BE_REPLACED 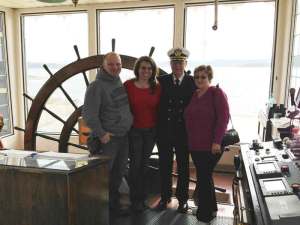 The other night I mentioned that we went to Branson, MO this weekend to take my mother-in-law on the Showboat Branson Belle.  A year ago I bought tickets to go through a United Way fundraiser at work and we absolutely LOVED it so this spring my parents went with us and then this last weekend my mother-in-law finally got to experience it.

I can’t even begin to tell you about the awesome weather.  We couldn’t have asked for a better weather experience!  Other than it was a bit overcast and extremely windy, the weather was perfect!  You had to wonder if it really was December 1st when the high topped out on Saturday at 72 degrees.

Now the Showboat Branson Belle is located on Table Rock lake.  Table Rock Lake has 800 miles of shoreline so it’s a good sized lake for a good sized paddle wheel ship that  that took 60 cases of bananas 9 seconds to slide the ship off the shoreline into the lake :). 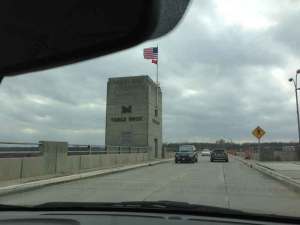 END_OF_DOCUMENT_TOKEN_TO_BE_REPLACED

So today just so happens to be my parents 34th wedding anniversary.  Happy Anniversary mom and dad!!

Yesterday my parents, hubby and I went to Rogers, AR to go shopping at the Pinnacle Hills Promenade.  When we made our plans the day before, I asked if while we were down in the area if we could go eat at A&Q Chicken.  My mom said, “Well, I’m sure we might be able to arrange that.”

The cool thing about going to eat at A&Q Chicken House this particular time was the fact that my parent’s ate their first meal as a married couple on the eve of their wedding day as they were headed out on their honeymoon.  And it just so happened to be this A&Q Chicken House in Springdale, AR.

What’s even better about that story, the lights went out and they ate in the dark.  That didn’t happen this time though.

So anyway, A&Q Chicken House has been around since 1947.  I believe that shows the test of time.  Shows they truly have awesome food.

They start you off with yummy rolls that you can add butter and honey to.  Of course I did that!  I know how to roll :).

I went with the Chicken Parmigiana.

This was a very good Chicken Parmigiana!  The noodles were good and I’m not a huge fan of spaghetti plain, but I ate quite a bit (not all because it was a huge portion!).  The chicken was nicely fried and was juicy and tender.  The sauce on top topped with the cheeses were a perfect blend.  I walked away STUFFED! 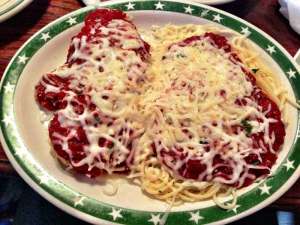 Mom & dad both got the Original Pan Fried Chicken 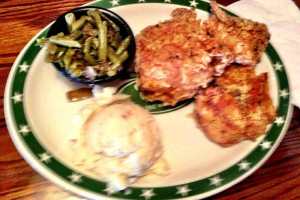 One time hubby and I ate at the one in Fayetteville and he wound up getting a combo platter with 3 types of chicken.  His favorite (and I agree) was the Over the Coals Chicken, so that’s what he ordered this time.

Chicken over the Coals
Three pieces of pan fried chicken with that “grilled in the backyard” charcoal flavor.  Seasoned with our famous lemon pepper seasoning.  Served with choice of two side items.

Hubby went with the Smoked BBQ Beans & Batter Dipped fries.  Now I tried the beans because I’m always telling Tbug to try new things.  I don’t like beans, I’m sorry, but they did have a good bbq flavor to them, still not a fan of beans though.  The chicken was moist, the charcoal flavor on top of the lemon pepper was perfection!  The fries were very interesting.  A nice batter on top of the fries.  I only tried one though and mine was really hot when I tried it, although definitely not bad.

I loved the fact that they had a map with visitors from all over the US, and the world even.  The papers listed countries that weren’t listed on the map and parts of Canada not seen on this particular map.  They also had a guest registry book that was multiple pages thick.

All the posters on the wall caught my attention showing different things about A&Q through the years.

And if you think about it, it is Arkansas so… Former President Bill Clinton has even visited there and they even documented it.  There were multiple photos of him eating there, co-mingling with the other patrons.

And how cool is this truck.  If anyone knows what it is, please by all means share! 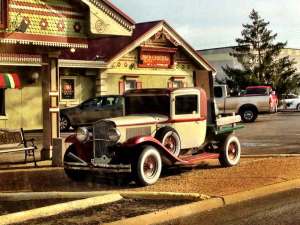 They have two locations, one here in Springdale and one in Fayetteville.  I have eaten at both and I say, heck if you’re in the area, you like good fried chicken, you should so check them out :).

Happy Anniversary to my Momma & Daddy!  Here’s to 34 more brilliant years (I’ve been watching too many British movies I think).  And I guess maybe we should have taken them here today instead of yesterday… oh well maybe next year.

I swear, my husband must be one of the luckiest chaps on earth, right?  He got a week long birthday celebration, start with his surprise birthday party two Saturday’s ago, his actual birthday last Thursday where he got to open my presents and his momma cooked him (us) dinner, and then this last Saturday (as in 2 days ago) Tbug, my parents and I took him to dinner.  Lucky duck!

So since I shared the surprise party with you already, let’s jump forward to his birthday.

Now truthfully I should have waited until Tbug could be with us to give him his presents, and I almost held one back to give to him with her around, but since it was his 30th birthday I wanted him to have presents to open so I let him open both presents.  I guess I kind of suck that way… 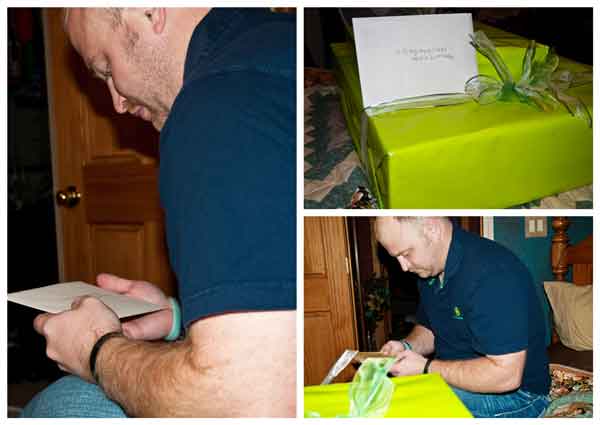 He had been wanting a new pair of house shoes so look, what do you know I listen, sometimes.  Just don’t let the word spread.  I don’t want to get a reputation or something ;). 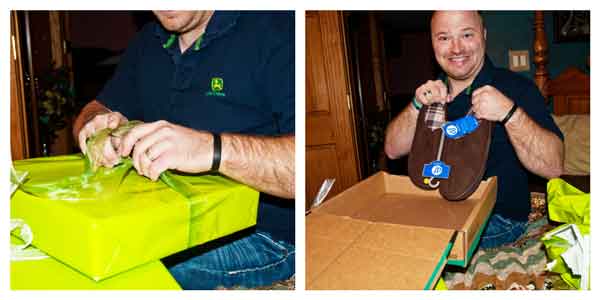 Then, pretty much since we got together he’d tell me he wanted to get a flag display case for his grandfather’s flag that was draped over his casket when he was buried, so I finally found him one, not that it is difficult, just I finally did it.

His mom came over and made him a birthday dinner, complete with sign greeting the birthday boy and everything at the entrance of our driveway (sadly I didn’t get a photo.)

She made Cheeseburger Meatloaf, Mashed Potates, Copper Pennies, Corn and crustless cheesecake.  All of his favorites.

We waited until Saturday to celebrate his birthday with my parents since one of his favorite restaurants is TGIFriday’s.  The closest one is an hour away and sometimes on work nights that is a bit of a drive.

Tbug gets to spend her daddy’s birthday with him, however since we were celebrating on Saturday she didn’t have to worry about missing cheer on Thursday and we got her on Saturday evening so she could go out to dinner with us.

It was handy that Tbug’s mom was already in Springfield so we met up with her at Bass Pro and then headed for TGIFriday’s. 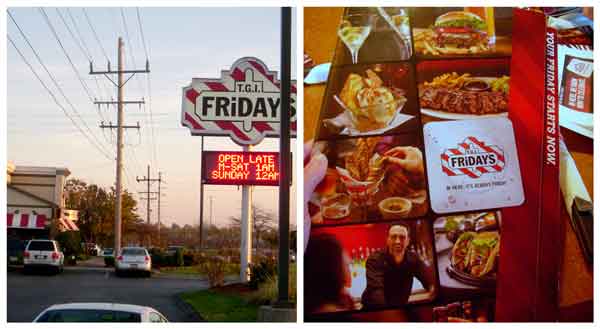 Now if you recall back, Hubby and I have given up pop, however every once in a while we’ll either have one or something that resembles one.  Saturday night happened to be one of those times.  I had a Cherry Limeade Crush (left: Muddled Cherries, Fresh Lime Juice, Pomegranate & Sprite) and hubby had a Strawberry Lemonade Slush (right).

Our waiter teased that the kid got Coke and the parents got the sweet stuff.  LOL :).

After the waiter took our orders, mom gave hubby his card & present.  He’s been wanting a new wallet so what do you know, someone was looking out for him :).

Now, Tbug looks extremely bored here, however I can assure you she was so excited about going to dinner with us, when she called hubby on Thursday night to wish him a happy birthday it’s all she could talk about. 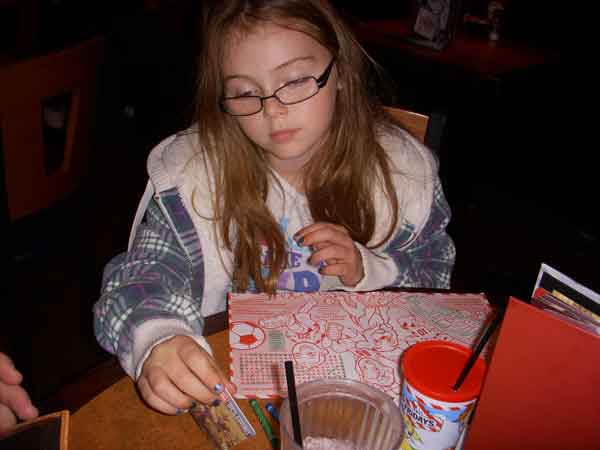 Holy cow I LOVE their food.  I should try something new but sometimes when you find something sooooo yummy, it’s hard to vary away from it!

I got Chicken and cheese. (Sauteed Garlic-Marinated Chicken served over melted cheese with onions and peppers served with creamy mashed potatoes.)  Holy YUM!

Hubby loves TGIFriday’s because of their Jack Daniels menu.  He went with the Jack Daniel’s Sirloin and Shrimp (10-oz black Angus Sirloin fire grilled and basted in Jack Daniels sauce, paired with Crispy Cajun Spiced Shrimp.  Served with your choice of two sides.  He went with double loaded Mashed Potatoes).  May I add Double YUM!

Tbug went with Pasta with Marinara and a side salad with ranch.  But don’t be fooled, she ate oneo f my Chicken breasts too :). 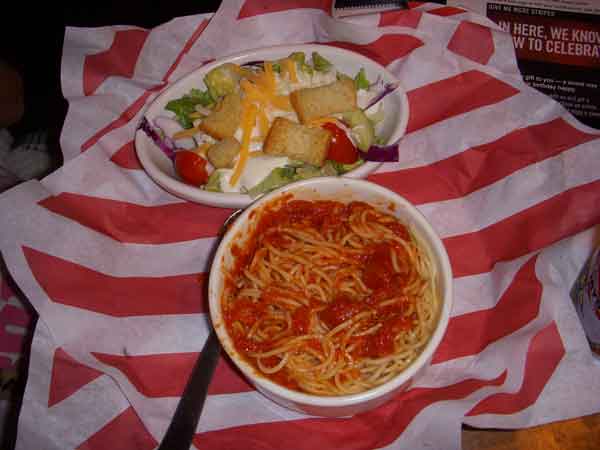 My dad went with the Jack Daniels Salmon (Norwegian salmon fillet fire-grilled and glazed with Jack Daniel’s sauce.  Served with Jalapeno Corn bread and your choice of two sides.  He went with a salad with Ranch (which he didn’t wind up getting) and Potato wedges.)  He said it was fabulous. 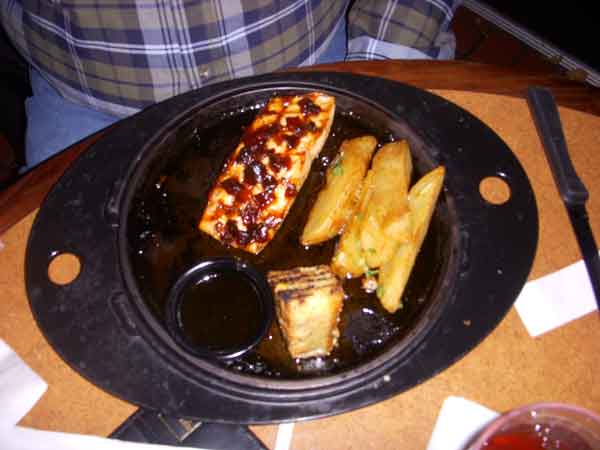 Mom got a 10oz Black Angus Sirloin with a Tomato & Mozzarella salad & Vegetable Medley.  I’m sure she was the healthiest of us all! :). 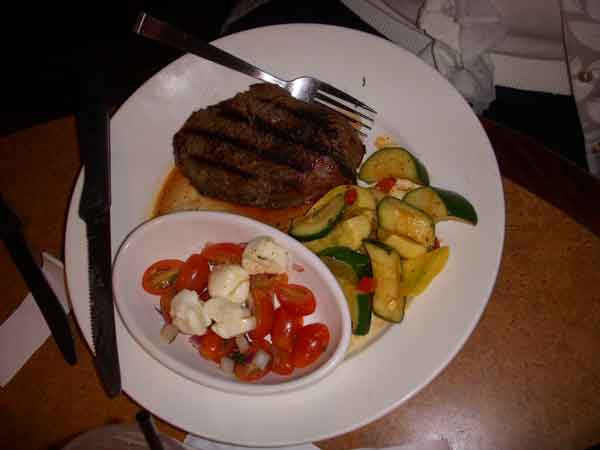 Now dad is a member of their Stripes club and since his birthday was the 9th of October, he actually had a coupon for a free Birthday dessert.  The waiter recommended the Whiskey Cake (a sharable portion of Warm Toffee Cake, topped with glazed pecans and vanilla ice cream and served with Butterscotch Jack Daniels Whiskey Cream Sauce). Seriously this dessert made you think you’d died and gone to heaven.  It was fantabulous!  Tbug wound up finishing it off after Dad, hubby and I had some.  Oddly enough I think she wanted more… LOL. 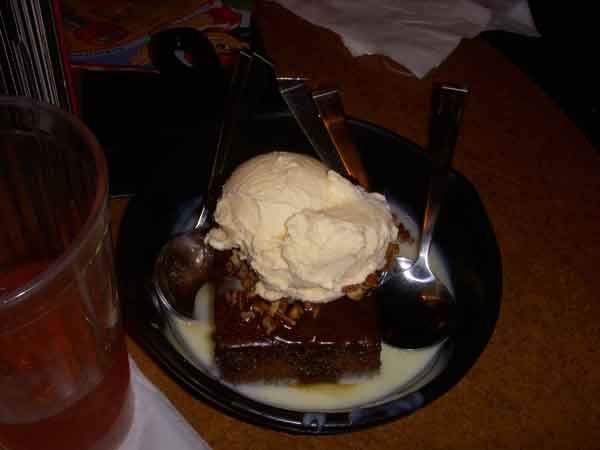 And they found out it was “hubby’s birthday” and he got a Birthday Sunday!  Sweet!

All I can say is I sure hope that this was an unforgettable birthday for hubby and a great way to ring in a new decade.  Happy Birthday baby! 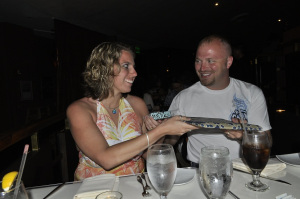