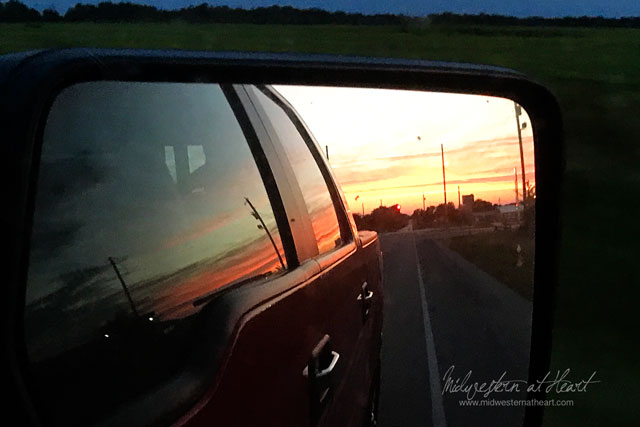 We loaded the Chiefs bus and headed toward KC. 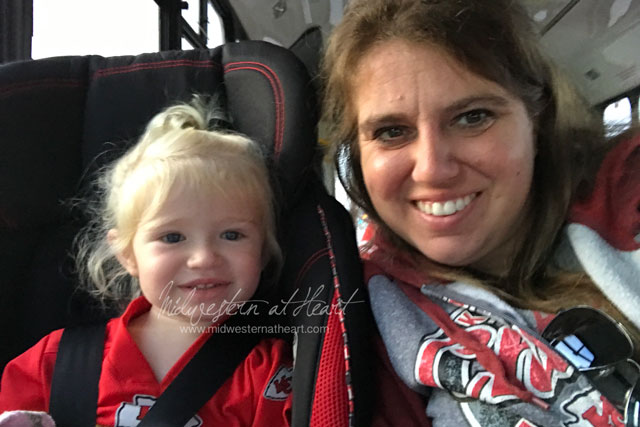 On the way up we got a glimpse of the sunrise but then, it was gone and all we had was cloud cover. 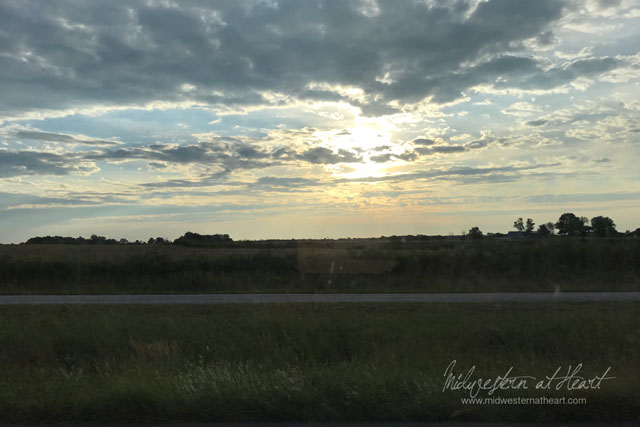 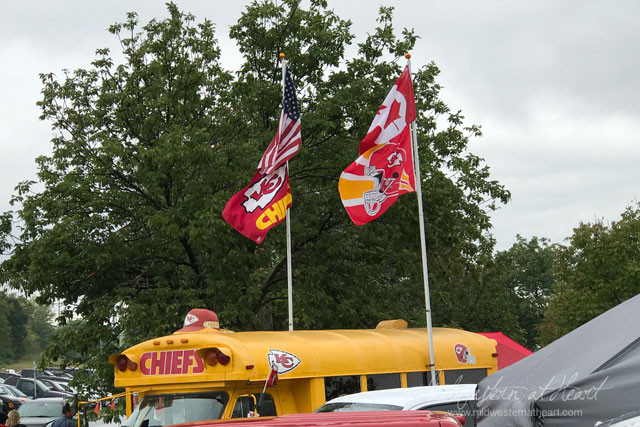 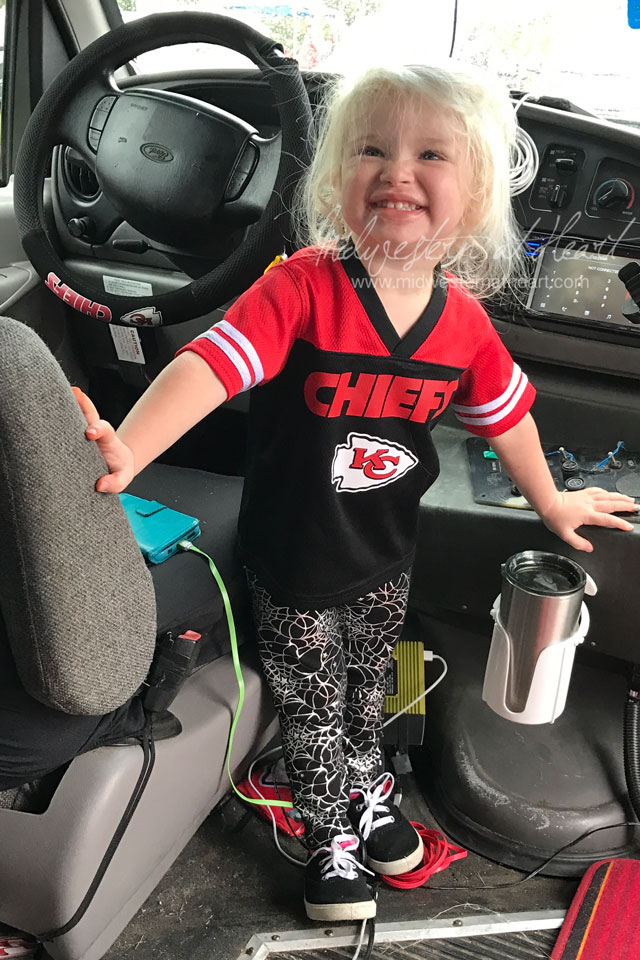 Hubby had to work. 2 weekends a year he has to work and it just so happened to be this weekend. We tried giving his seat away but no one would bite, so he went with us and sat on the bus working with hopes he’d be done working so he could watch the game. Normally he’s one who helps cook, but he had other commitments so Grady took up helping cook. Boy did he get fits about that too. To the point we had to take “blackmail” pictures. Okay, not really but we did take pictures and they just so happened to land on Facebook. 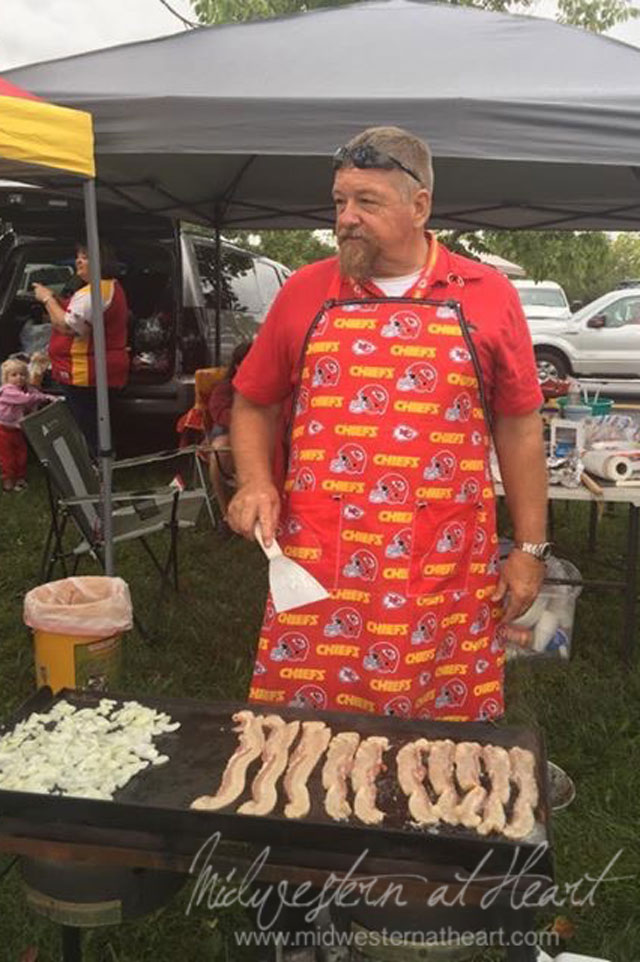 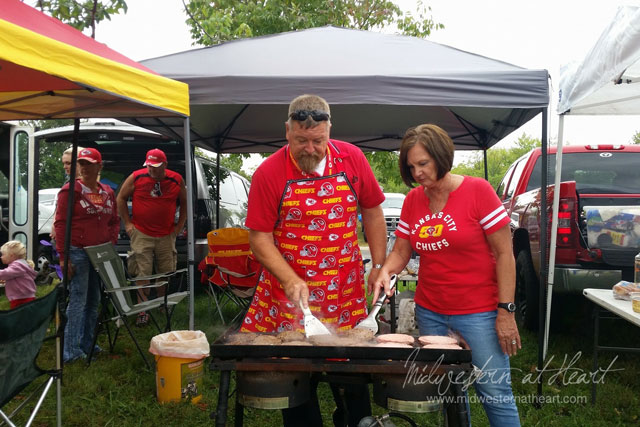 A bunch of Jets fans walked by and wanted their picture with the Red Coaters. They told us that we’d need a towel after the game to dry our tears…. Nancy wished they’d have come back after the game…. 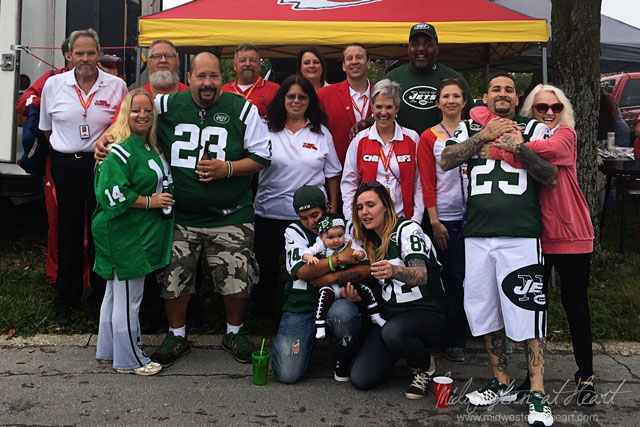 Hubby finally got done working on Sunday in time to go to the game. In fact, we left him at the bus when we went into the stadium and he met us in the stadium. Grady gave us rain jackets to wear because it rained off and on throughout the whole morning. Hubby had Grady’s and kept putting his hand inside the pocket and finding more and more gear so he kept putting it on. And yes, the glasses are broken… that’s part of the humor in this picture. 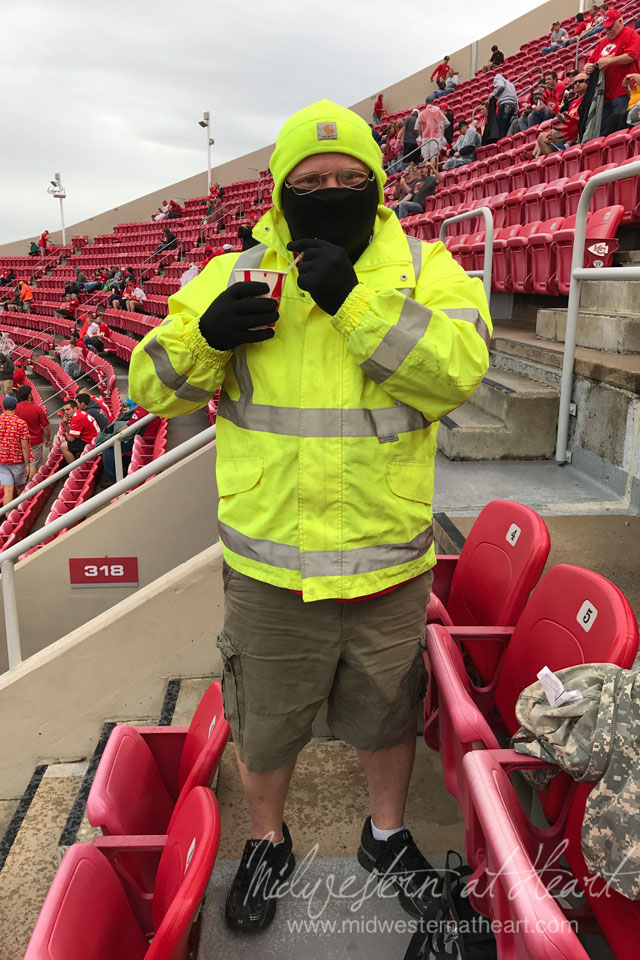 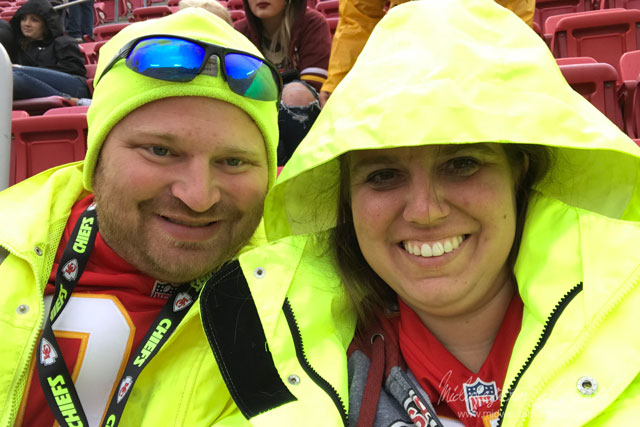 Poor Abug didn’t have her Tbug to sleep on. She wound up having to sleep on mommy and daddy. 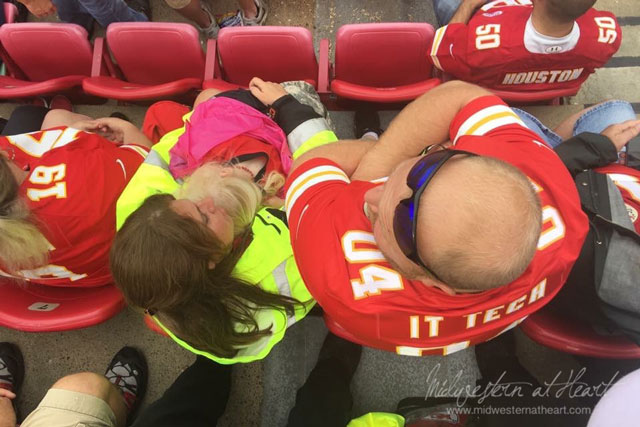 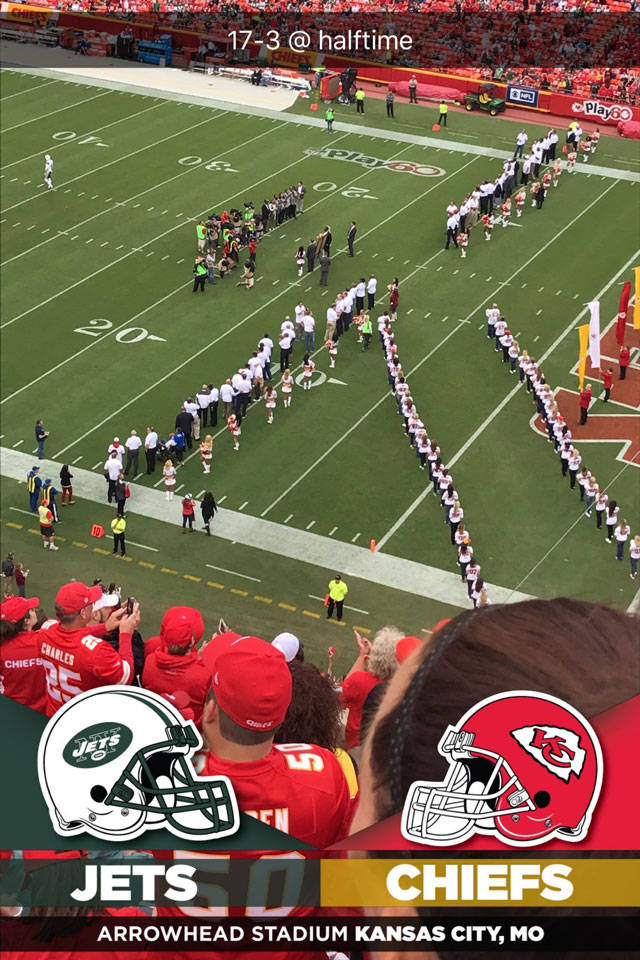 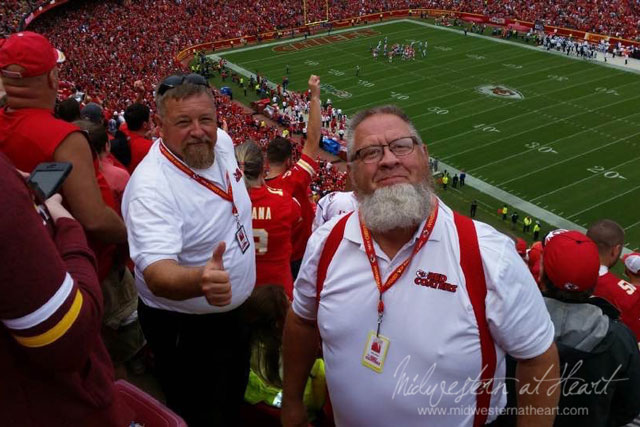 Anna is a season ticket holder in front of us. 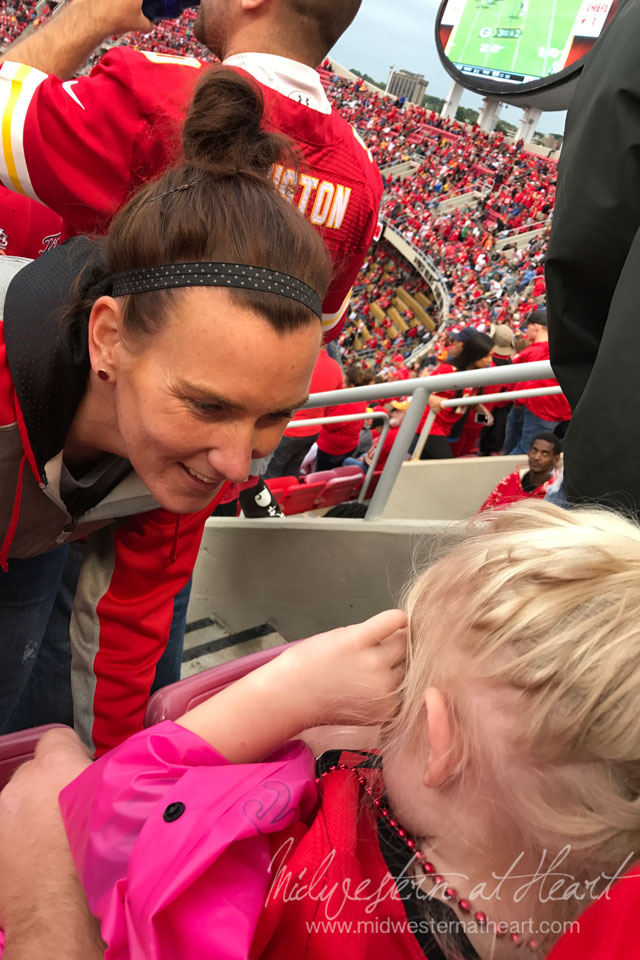 I guess we discussed leaving at 1 minute left on the playing clock. Hubby and Abug left not realizing that we were still standing in our seats. So they were a full spiral ahead of us walking down the ramp. Oh and did you know… we won, 24 to 3 Chiefs versus Jets. 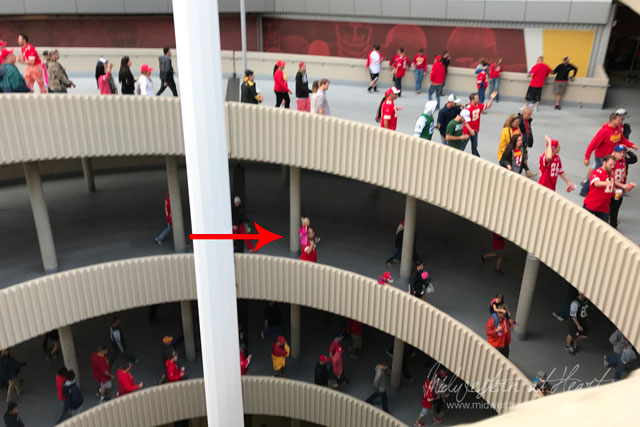 On our way home this happened. We’ll just leave it at that…. 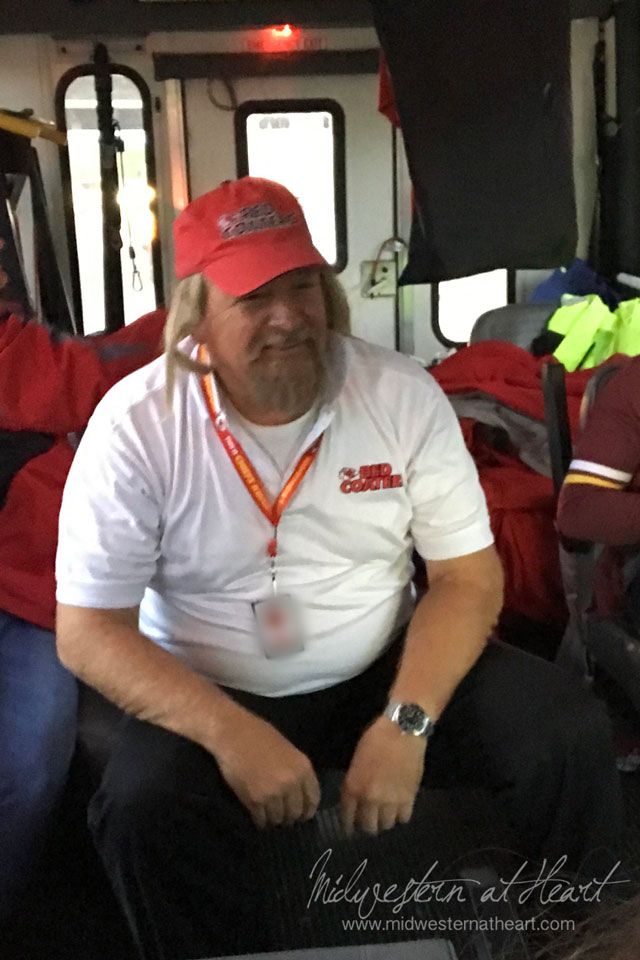 We stopped in Harrisonville to eat dinner. The sky was on fire. 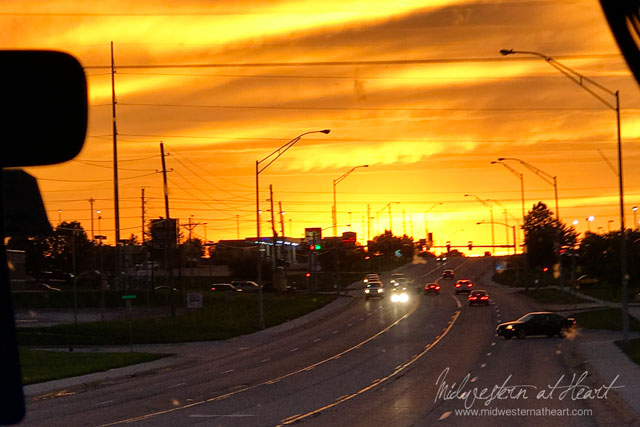 And then dinner. Dinner was less than stellar although mine wasn’t bad. this was Applebee’s. I had the Chicken and Cornbread Salad. The cornbread croutons are out of this world awesome… but a little spicy so if you don’t like spice, avoid this meal! 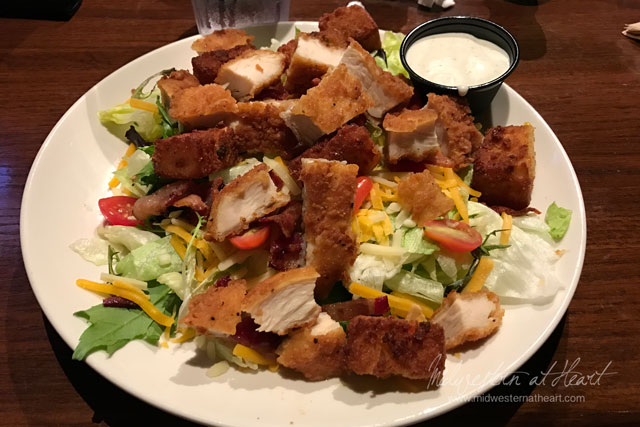