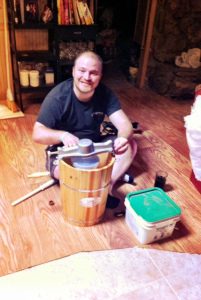 Last year, just before the 4th of July sometime hubby bought an ice cream maker off eBay.  We’d been wanting one for a while and this was the wooden barrel kind that had an electric motor.  Truthfully, I can’t say I was all too thrilled with his purchase.  Especially after he lent it to a friend, they used it, gave it back and come the day of the 4th Party at our house, the darn thing didn’t work.  One of hubby’s cousins ran to a friend of her’s house to borrow theirs.

So ever since then, he’s talked about going on eBay and either trying to find replacement parts or find a new one, etc.  I haven’t been the most thrilled about that idea, but I never just flat out said NO either.

So Monday of this week we were walking around Bass Pro and he was talking about our rewards points and how we had $43 and change in Rewards money.  He said he was saving up for something, dunno what can’t remember… whoops… But that if we didn’t use what we had soon we’d lose them.

We wandered down into the camping gear area and I walked past a brand new Ice Cream maker, originally $99.99 but on sale for $79.99.  I was like, well you know, if we put the rewards points toward that and then split the difference of the remaining price.

He’s been wanting another one and so he agreed.  So we walked up to the counter to check out and told the guy we had rewards points to apply toward it also.  The guy ran my rewards account and said I had $23 and change in rewards money.

He said maybe some had already fallen off when hubby said that he’d just checked it last week.  The guy told us to go talk to Customer Relations and if they recently fell off they’d be able to put them back on, so away we went to Customer Relations.  When we got there and told him, he looked at my account and said, “Wow, you’ve had a bunch fall off.”

He placed them back on my account and we went to pay for our ice cream maker.

Oh did you notice I didn’t tell you how many they put back on??  Are you wondering?  I had $83 and change in rewards points put back on my account (total) so I wound up buying hubby a brand new, wooden barrel, hand crank & electric motor ice cream maker for $2.86.

You can’t beat that with a stick!

We had to try it out Monday night!

Earl, Pokey & T came over to help us enjoy the ice cream.  Moo was already there!  And Tbug even got to partake because she’s staying a few nights this week with us.

Grilled Ham & Cheese
Sunday Fun
Hay Season 2016: And they're off
Quilt Block 25 & Putting the Quilt Together

0 thoughts on “My Cheapo Purchase”