A short year after their marriage on June 10, 1950 their family of 2 became a family of 3, mother, father & son.  2 years later they added 2 more but not wanting an un-even number of kids 2 years after that they rounded out the family with their 4th child.  This family of 6 lived in rural southwest Missouri on a working dairy farm.  As the kids grew older, they helped with farm chores of rounding up the cattle for milking, milking or just checking the cattle to make sure they were all where they should be and problem free.  Along with the milk cows they had Hereford cattle and of course their trusty horses.

Meanwhile in Southern Michigan the family of three expected their first child [together] a little over a year after their marriage on September 4, 1954.  She was followed 3 years later by her younger sister.  This family was into the horse business and went all over the state showing horses.

As the son grew up his grandmother wanted him to go off to college somewhere.  She told him he needed to get into the Engineering field, but he had different dreams, he wanted to be a veterinarian.  Toward the latter years of his high school education his grandmother took him to Colorado with her while visiting some friends.  She wanted him to see the Colorado State University.

Eventually the son would attend Southwest Missouri State College for his first two years and planned to transfer to MU – Columbia to join their veterinarian program.  Life took him on a different route and he eventually transferred back to Missouri Southern State College to finish out a Biology degree.

When the daughter hit her Junior year of high school, the family decided to move to Missouri.  The father had had enough of the cold Michigan winters and wanted to move somewhere warmer.  They had some fellow Arabian horse breeders that moved to southwest Missouri that they came to visit and decided this is where their family would move so they picked up and headed south.  She finished out her high school years and graduated.  She had dreams of going off to school and living in the dorms but her father thought differently.  He finally agreed that if she got a scholarship he’d allow her to live on campus at Missouri Southern State College and away she went.

She had been dating someone for a while and it wasn’t looking to promising so she asked a fellow dorm mate if her fiance had someone that he could set her up on a date with.  The fiance asked his good friend if he’d be willing to go on a blind date with this girl.  He agreed.  The fiance told the girl that the guy picking her up would be driving a Corvette.

When the guy pulled up in the Vette, she though how bad could it be.  Later she found out it was his brother’s and his ’69 GTO wasn’t running that night, it was borrow the Vette or else pick her up in his Uncle Ted’s ’69 Caddy.

On the date he told her he raised “Santa’s”.  Not knowing what Santa Gertrudis cattle were she figured he was trying to pull a fast one on her until he explained what he was talking about.  Toward the end of the date it started to sleet so she insisted he take her back to the dorm.  Little did she know, he lived to drive in that type of weather.

Two short years later after she graduated from Southwest Missouri State University the two were married on November 25, 1978.

The couple went on to raise “Santa’s” and Arabian Horses.

Five years after they were married they invited their one and only child into the family, a daughter. 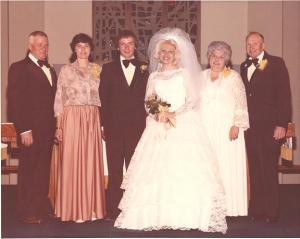 Happy 32nd Anniversary to my parents.
And I would like to also wish all of my American friends Happy Thanksgiving, and all of my other friends, Happy Thursday!
Nicole