Today is my sweetheart’s 28th birthday!  We actually took him out yesterday for a couple reasons:

1. Because we wanted too 🙂
2. Because today is Monday
3. Because we had his daughter this weekend
4. Although we get her on his birthday
5. But, he has class tonight from 6-9… so yeah that doesn’t work.

But Today is his actual birthday!  Yey!!!

Here is Tbug and my PC 🙂

Here my dad is showing PC what  his present is from my parents.  It was in a comic and I never saw the picture but from listening I’m thinking it was a straight jacket… LOL

Here he is reading Tbug’s card.  I gave him his card from me this morning. 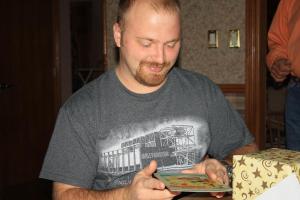 He’s opening Tbug & my present to him.

Doesn’t he look so happy… LOL.  He has no idea what it is/was.

Which is apparent by this look on his face.

It was a new Wallet. 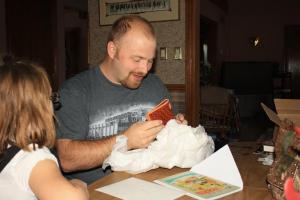 Now the story behind the wallet, this is great!  A few weeks ago he was saying he wanted a new wallet.  Actually he’s been saying this for a while now.  But we were at a store that sold the type he carries and he saw this wallet and liked it.  It was behind glass so we couldn’t see the price.  He walked off b/c I told him I’d find out how much it was.  The guys at the store worked with me!  I told them I had to get it bought with out that guy (pointing at PC) knowing.  They were like, ok how you paying.  I told them my cc (hey I get points toward a cruise and keep it paid off, so sue me!).  They said hand it to us and walk off we’ll get it back to you.  So when PC walked away from me the guy handed me my cc and the wallet and I buried them in my purse.  PC had asked me how much the wallet was and I told him $80 so that he’d leave it alone :).   I was so afraid that I’d been caught a few weeks ago when PC was looking for his glasses and dug through my purse, but he says (I hope he isn’t pulling a fast one on me) that he didn’t look in the zippered part where I put the wallet.

Here he is reading his mom’s card.

And now reading the card from my parents. 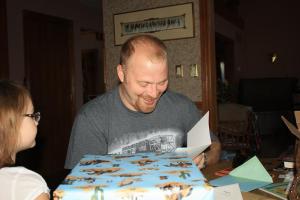 One of his favorite restaurants is TGI Friday’s.  He told me not to make a big deal of it but if that’s what my husband wanted, that’s what he got :).  Here is the cheesecake he had for his birthday and oh was it to die for!

Happy Birthday Sweetheart!  I hope it was all you wished for!

Vlog - Just for you 🙂
Happy Birthday!
We can haul a gooseneck
This one time I went to a 1st Birthday Party