If you happen to be any type of hunter, you’ll know that it is Turkey season.  Hubby, Pokey, TB and Mr. T got up at some unheard of hour (5am) and went out to the wilderness to find a turkey.  They didn’t have any luck though.  I woke up at 8am and I didn’t quite feel right.  They had to take Pokey back to his house and then TB, Mr. T and hubby came to our house to see if they could rustle up some turkeys.  Long story short, no turkeys were found and hubby stayed with me.  Then Mr. T and TB took hubby’s truck back to Pokey and Earl’s house.

This weeks theme for SND was Smoked Ribs plus sides.  Earl brought the ribs to our house, but hubby had plans to meet the boys at Earl’s and target practice, so hubby decided to take the smoker to Earl’s.  Since Mr. T took the truck and my car won’t haul the smoker, this is what hubby came up with…

Since I didn’t feel so hot earlier in the morning Hubby and Earl wouldn’t allow me to do much… lol… so when I left, I found Rio hanging out in the yard I should have been mowing.

When I got over to Earl & Pokey’s, hubby was taking the ribs out to smoke.  SND had to be a bit earlier this week than normal because they had a birthday party to go to later in the evening, so hubby had to get the ribs on earlier than normal.

Earl and I helped carry ribs out to the smoker, then while I was standing out there I found confetti from last year (read that a year ago) Easter when we made confetti Eggs.  I thought that was funny.  Sorry Earl and Pokey!  Wonder if that stuff will be there in 10 years??

Earl and Pokey’s BBQ grill went to pot, so TB brought the loader up to take it away with and then hubby and the kiddo’s jumped on the four wheeler and went down to help unload it.  Boy, the kiddo’s loved that four wheeler.  When hubby then got off to check on the ribs, Moo kept asking me to take them on a ride. 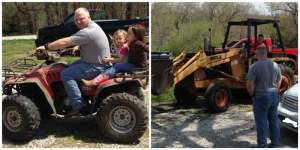 I decided this must be a lazy day for everyone, because not only did I not feel well, but Pokey got a headache and went in the house and laid on the couch while watching the 1st season of Duck Dynasty.  While I was standing outside with hubby again checking on the ribs, I noticed the piggies had the same idea.  But it totally cracked me up that one was sleeping in the feed trough.  I guess you can call it a lot of things, but late for dinner is not one of them!

After hubby got a good fire going with the ribs, he, TB and Mr T went down to shoot.  Later JT & AL showed up.  AL came in the house but eventually wound up down at the shoot practice.  Then when I got down there they were just cleaning up.  No, shooting practice for me, oh well, I was shooting my camera anyway 🙂 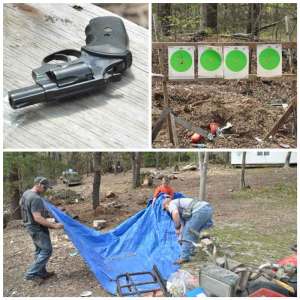 One thing we can down on a SND is Sweet Tea! 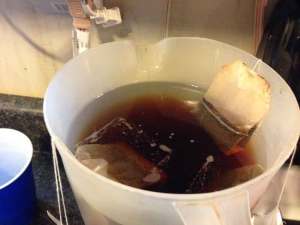 I decided to make Mozzarella sticks for SND.  While I was sitting at the table breading my cheese, Miss Tude brought me a flower.  Sweet right!?!?  Now keep in mind, she’s 3 years old.  We were talking about where her daddy was (Mr. T) and she said he was down shooting the boys.  I was like, you mean he’s shooting with the boys.  She was just positive that he was “Shooting the boys”.

A cute thing about drinks.  I wound up having to run back home for stuff to make my cheesesticks and while I was there I grabbed myself a cup of Cherry Limeade.  When I got back to Earl’s she asked if I liked Iced coffee.  I told her I wasn’t sure so she poured me a cup, so I had 2 drinks sitting in front of me.  Miss Tude was talking to me the whole time I was breading the cheese and she looked at me and said:

We told Mr. T about this conversation and he was fairly certain he might need to have a talk with Miss Tude about boys… lol 🙂

Earl made a Hash Brown Casserole with her Gluten Free Cream of Mushroom soup so it was Moo & AL friendly.  Soooo good.  I may or may not have had 3 servings.  Hey don’t judge, they were only serving spoon size!!

Niah & Jay brought Hawaiian Rolls.  We definitely had to break out the Strawberry Jam that Moo made.  Yum! 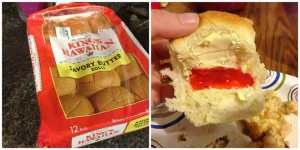 So after dinner I spotted one of the little piglets running around the yard.  I ran out to snap a few shots.  Eventually the curious thing walked up to me and about the time I snapped the picture he touched my foot and I jumped which scared him.  We scared each other… lol.

It was such a gorgeous day!  The high was 69 so none of us wanted to really stay in doors.  Waldy was swinging and Little butt kept getting in his way so she could play in the mud.  I pointed at the other swing and told her to play in the mud under it.  Next thing I knew, she decided to “swing”.

Then we had a pig chase on our hands.  Pokey had been moving the piglets into a different pen, but couldn’t catch the one I snapped a photo of earlier in the day so Diver Girl, TB and Waldy decided to catch the pig for Pokey.  They finally got the piglet caught and put into the right pen.

Next they got the bows out for some practice with that.  Just as Jay and Niah went to leave, they talked Jay into trying.  He’d never shot a bow before and hot dawg, we decided he was born to shoot a bow.  Then they were teaching Niah.  They even tried to “tempt” baby D.

Ok how cool is this shot of all 4 boys lined up to shoot!  Seriously!  And once they shot, then they had to go gather their arrows.

Toward the end, we even had Earl shooting hers.

About the time that Earl & Pokey and the kids needed to be heading to their Birthday party, hubby loaded the four wheeler in the truck to take back home.  TB was so shocked that hubby loaded it backwards.

And a few more random shots throughout the day:

1.  Miss Tude holding Moo’s cup for her.
2.  Zebra Girl was hiding from the camera so I made it a point to get her picture.
3. Miss Tude was helping Earl by pulling the “weeds” out of the ground.
4. Waldy was playing with the remote control car and running it under everyone’s feet 🙂
5.  Little butt was giving the puppy kisses. (she’s 2)
6.  Earl had all her girls.
7.  Yum! Chocolate covered strawberries!!
8.  I was told I look flat out mean in this photo 🙁
9.  Early and Nicole 🙂