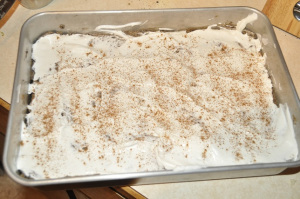 So today I’m kind of at a loss for what to post about.  I’m not so much having writer’s block as more, my heart is heavy.  Sometimes with marriage, you get the good with the bad, the funny with the sad or serious.  Today I’m feeling some of the serious.  No, nothing happened other than something was said.  It wasn’t bad or anything, just a matter of fact statement but it just got me to thinking.  And the sad/odd thing, I’m the one who said it.  I’m sure my day will get better, I mean come on, I get to study for an A&P Root word test that I haven’t studied for.  The test is tomorrow night.  Anyone know Greek & Latin Prefix and Suffix words, wanna go take my test for me?  I’ll give you a dolla 🙂

Ok, so I guess I’ll share with you this recipe.  The other day on twitter @BekahEdwards sent out a post asking for an easy recipe for a pot luck and I sent her this recipe.  It’s so super simple that I’ll share with the rest of the class too :).  Just trust me, make it for someone else, otherwise, you’ll eat the entire pan!  I’m just sayin! 🙂

Make the brownies cake-like (add an extra egg) and let them cool.  (I used the cheapest boxed brownie mix I could find and they were still super good!)

In a bowl, you mix 1 cup of milk and  ¼ cup of instant coffee granules until they are dissolved.

Add half a tub of whipped topping and two boxes of cheesecake pudding.

and fold into the mixture.

Spread over the top of the brownies.

Take the remaining cool whip and pipe it across the top and then sprinkle some cinnamon on top. (yeah I was lazy and didn’t pipe it, I just spread it with my spatula)