So I was sick yesterday!  Blech!  No Fun!  And on top of being sick, I had an A&P Test last night.  Our teacher can be rather difficult!  She said that basically if you don’t show up for the tests, you can make them up, but it might be in December the same night as finals.  No Thank you!

On Tuesday nights Hubby & I both have a night class, so after work he drove home and picked me up (I was throwing up sick, sorry TMI) and drove me to class so that late at night I wasn’t driving myself home, sick!

I pretty much slept my day away too.  At one point I fell back asleep around 1pm and the sun was shining in my room and my room was bright, even with the shades drawn, but it was nice.  When I woke up around 4ish to start getting ready, my room was dark.  Isn’t it crazy how the world just goes on without you even when you’re sick?

My foods yesterday consisted of mints, about 4 bites of pineapple, and a Sprite.  Then last night I was starving… ok not starving maybe, but I was really hungry so I got a Nestle Crunch Concrete (ice cream) and then ate half of hubby’s fries.  I was doin good!  And just a TMI FYI it all stayed down!  Score!

Today I’m happy to report I’m upward and mobile.  So I’ve had this post sitting in draft form for a while and since I didn’t write up a post for today (gotten in the habit of writing them the day before… but not always :)) I thought I’d share this recipe with you :).

In a large bowl combine the potatoes, cheese, and onion. 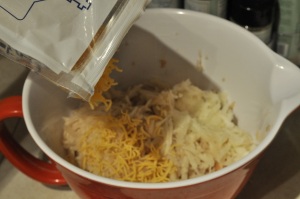 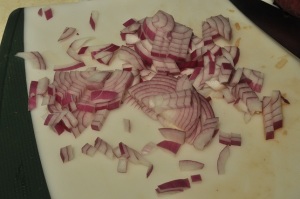 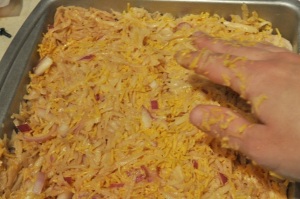 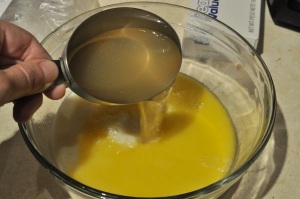 then pour the liquid mixture over the potatoes. 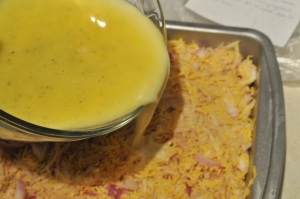 Bake for 1 hour, stirring after 30 minutes.

Cool for a couple of minutes to allow potatoes to firm up. 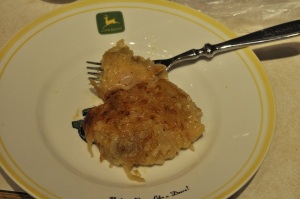