So you’ve read that we got ourselves a Bear (dog). If not you so have to stop everything you’re doing and go check it out, NOW!!!

Ok so that’s a terrible joke and really old but I don’t care. It’s Friday and that’s the way I roll. Yes, that’s becoming my ever popular phrase. To bad people couldn’t get paid for every time I say that because unfortunately, I say it, a LOT! Oh, Ball!! (haha, if that doesn’t make sense, read this)

Ok anyway back to the story, ok wait on me, I think I’m going to have to read what all I wrote so I know where I was going with this…..

(Jeopardy Music playing while I read to entertain you)

Ah, yes, Bear. So I told you in the post above about our new dog that he smiles. Boy does he Cheez-it up too! If you didn’t know him, you might think he was gritting his teeth at your like he was mean and going to bite your leg, but this dog is the most lovable dog! I finally caught a photo of him. Actually, I was trying last night and I kept missing him b/c he’d duck his head away while I had my camera phone out so I kept saying keep smiling and I FINALLY caught him. 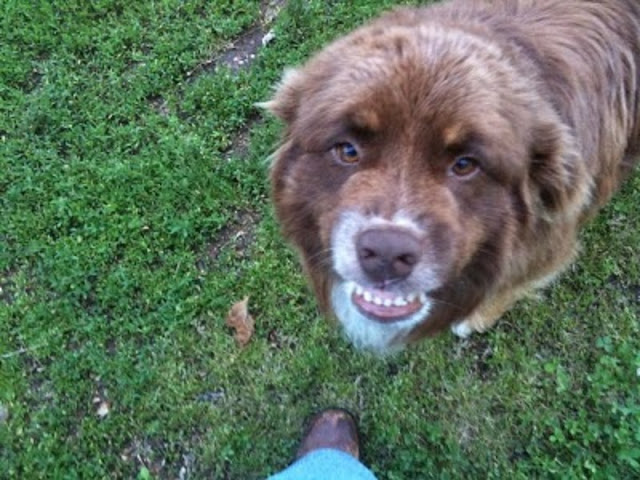 I swear he’s not growling, he’s smiling! His tail was wagging!
but he could sure get his bluff in on you.

We actually took him out to the house a few weeks ago while we were mowing and he loved it out there. I think he’s ready to move. Morelli still doesn’t like him. I’m not sure where Morelli is going, with us or staying at my mom & dads. He’s actually my dog but he’s always lived at M&D’s so who knows. I think I’ll let him decide :)So after the crazy hectic day I had yesterday, after work, we headed to my friend’s house. I told you Saturday I went to Doti’s bridal shower, well her wedding photographer canceled on her that week. She found another one but doesn’t have time to drive to her hometown to get another set of engagement photos taken and doesn’t want to use one of the originals for the papers, etc so she asked if I’d be willing to take a few of her and Wade. I told her absolutely so PC and I headed her direction after work to take photos. Their place is beautiful and has a great setting for some outdoor photos! By the time we got home and made dinner/ate I only had time to work on one photo. PC made me shoot all in Raw so I’d have to learn photoshop :). Smart idea but also a pain in the butt :). Oh well, I’ll survive :).

We got some great shots of them but like I said up there, I only had time to play around with one. I’m just not fast when it comes to photo shop but I thought I would share the one. Seriously if you think it looks bad, I can take it. That’s what’ll make me learn, right 🙂 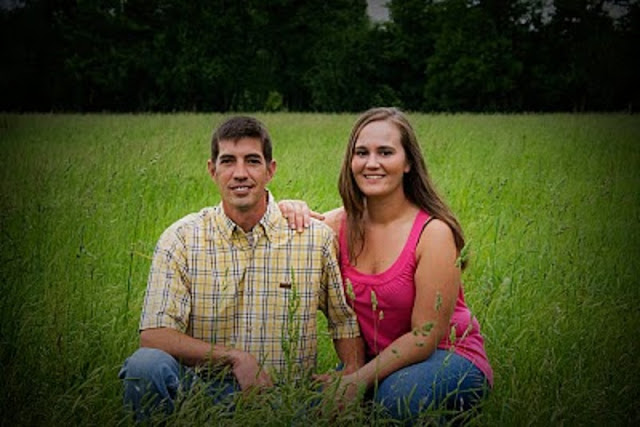 I think one thing I’d do differently is put Doti on the other side so her left hand was on Wade’s right shoulder and it would show off the ring. Here the ring is in the grass. Oh well, live and learn! We did get some shots with her ring hand on top where it could be seen.This weekend PC and I are going to edit some more photos and we’ll see what we come up with. Hope you enjoy!

And have a splendid Weekend!! Ooooh, Ball!

Planting Blackberry Bushes
I LIED!!!
Underwater Pumpkin Carving - It's a Thang!
I meant every word "they" said!