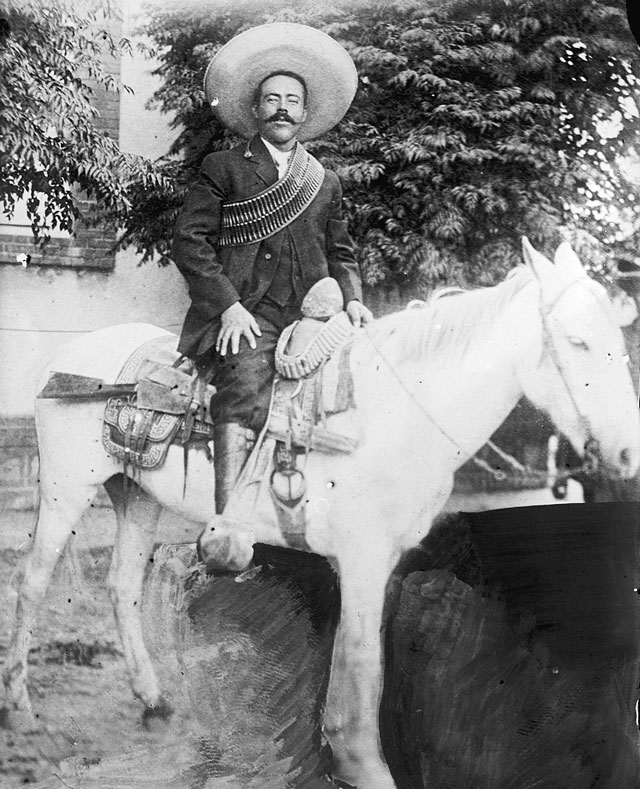 One of the guys that works there has some MAJOR artistic talent. I seriously should take pics of some of his work because WOW! He just happened to be our server that night. So my little looked at the wall next to us and pointed at a framed picture on the wall and asked if it was a real person. I laughed and said, Of course, it is, but who, I don’t know.

So when the server came back we asked if it was someone they were related to or who it was. He kind of smirked at us and said, it’s Pancho Villa. I think I got this confused look on my face and said, boy, that name sounds familiar. Then he started to laugh at me and pulled up Pancho Villa on his phone. I laughed and said, “Hey, I was an Agriculture and English Major… history isn’t my strong suit.” Although truth be told, I loved history. I really want to go back in time… but that’s another story for another day.

He was born in San Juan del Rio, Durango, Mexico as José Doroteo Arango Arámbula and died in 1923 in Parral, Chihuahua, Mexico as Francisco “Pancho” Villa. So somewhere along the way, he changed his name obviously. He held office as the Governor of Chihuahua and was a revolutionary general and prominent figure in the Mexican Revolution.

Without going into a lot of detail… the Mexican Revolution lasted between about 1910 to 1920 and the results transformed Mexican Culture and Government.

The details of his early life are very vague as he told lots of different stories of his beginnings. From what they gather, his father was a sharecropper on one of the largest haciendas in the state of Durango. He left but eventually came back to help his mother after his father died. He also came back to revenge for his sister but soon left again.

He was also in cinema playing himself often.

He had many wives for which he was never divorced or annulled. And his last living son passed away in December 2009.

The other thing I find interesting is General John J. Pershing was actually sent by President Wilson to find him. Why do I care? Well, I am distantly related to John J. “Black Jack” Pershing. Okay, well there is a lot more about Pancho Villa, and I won’t go into details. This really started out as a post on how I “embarrassed” myself.. but hey, as I stated above, I’m pretty sure they are used to it there. I’ve said some funny things. Whatever… I like to keep it real.