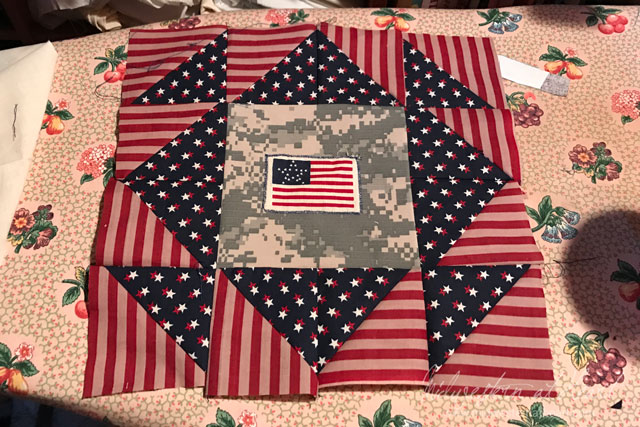 I found my sewing bag and took it down to grandmas. I had a bunch of material in the bag some of which was hubby’s old uniforms that I cut into different squares. My goal is to make his uniforms into a quilt, I even blogged about it once upon a time. That’s as far as I got… cutting up his old uniforms. I asked grandma if she had any idea on how we could incorporate that into Abug’s quilt top. The color I wanted to pull from Quilt block 4 was blue so we decided to do stars and stripes and incorporate hubby’s old uniform.

Now quilt block 5 was supposed to have a basket in it, but I wasn’t feeling the basket. We did however find a flag in some of grandma’s material so I was able to apply the newly learned task by sewing the flag on to the piece of material square.

So I present you with quilt block number 5. I got to grandma’s late today so we were only able to do one quilt block pattern. It’s not nearly the brightness of the other patterns, however, it’s got a whole lot more meaning.