If it weren’t for my family and friends I’d probably be bald by now. Yes, I just said that. Let me explain. Fall of 2013 I was presented with an opportunity that lead me to the road back to school to work on my Master’s. (I am forever grateful for this opportunity too!) My Bachelor’s Degree is in Agriculture, my Master’s will be in English. I sometimes get asked what I plan on doing with that…

So now when people ask me, as long as they know my smart aleck side, I’ll smart off that I will now be able to eloquently write to Cows, Sows, and Plows. ha!

Some days I need to just learn to keep my mouth shut :). What am I going to do with this… well there are lots of plans in the making, hopefully one of them pans out!

But for now, I rely heavily on my family and friends to keep me sain, especially this fall as I prepare for Comps. I’m not going to lie, I’m scared of general comps.

Thankfully my mom is able to watch baby girl for hubby and me on Tuesday’s, Wednesday’s and Thursday’s. I’ve stated in the past that when I was growing up I got the opportunity to spend a lot of time with my grandparents and I wouldn’t have traded that for the world. Well, this is one of those opportunities that my baby girl is being blessed with also.

So last Wednesday I made plans with my mom to get her the squirrelly girly and she offered to meet hubby and me for lunch. We took her up on the opportunity. When the restaurant she suggested didn’t pan out, we opted to try another one. Joe’s Pizza, Pasta, Sub Italian Restaurant. Upon first impression of the name, we assumed it would be fast food Italian but it was in fact the opposite. It was a sit down meal. 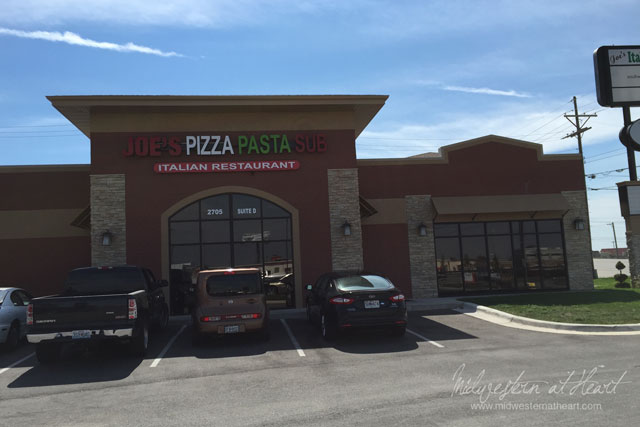 When we entered we were seated with menu’s as well as bread and dipping sauce. The bread almost reminded us of pretzel type bread. The first batch was a little over done but the second batch we got were pretty well almost right on the money. The dipping sauce was Extra Virgin Olive Oil, with seasonings and what tasted like balsamic vinegar. 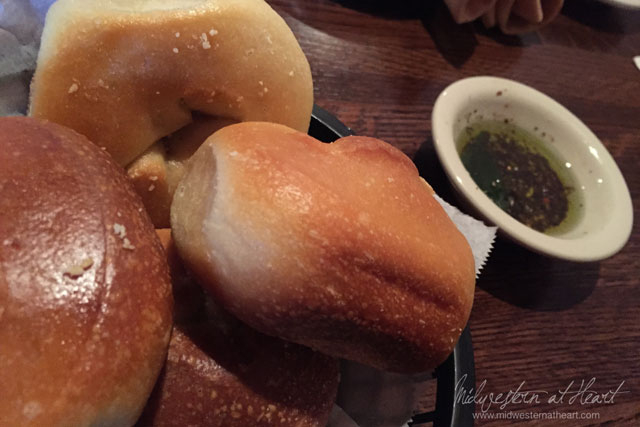 Our entrée’s came with salads. Now I like a good salad but I guess this just wasn’t the salad for me. I usually like cheese and crouton’s on my salad. Abug though loved the cucumbers and gnawed on them for quite a while. 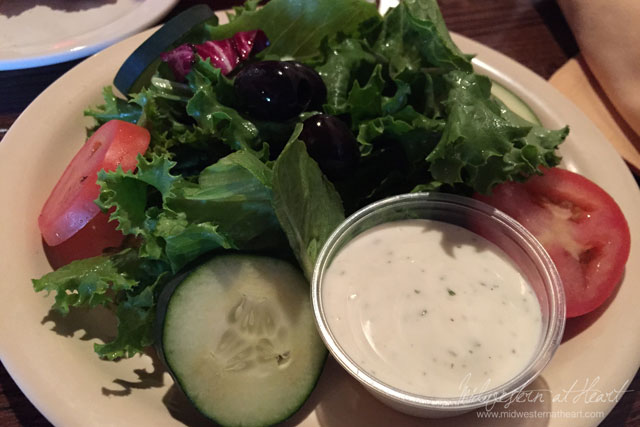 When hubby’s food came out, he mentioned that he ordered off the lunch menu. He said, boy that’s a lot of food. I noticed while looking at the menu that the lunch portion of Chicken Parmesan (not what he ordered) was the same price as the dinner version… Interesting.

He ordered the Chicken Cacciatore. He was pleased with his choice. I don’t think I tried a bite… I don’t remember trying it anyway… 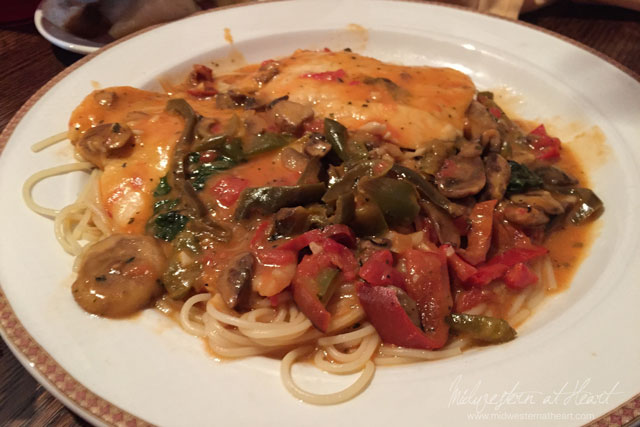 I went with the Pasta Sampler. It had Lasagna, some stuffed shells type stuff that was really good but I can’t remember what it was called…. and Fettuccine Alfredo. Normally I’m more of an Alfredo person and don’t get me wrong the Fettuccine was very good, but I actually preferred the red sauce stuff. 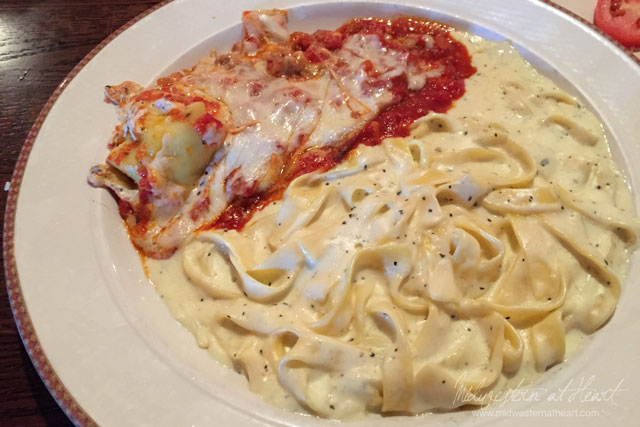 Mom got the Italian Sampler. I guess all three came in this one dish, we were a little confused… but mom said it was really good and that’s what matters I guess. I sadly can’t remember what all was in this. 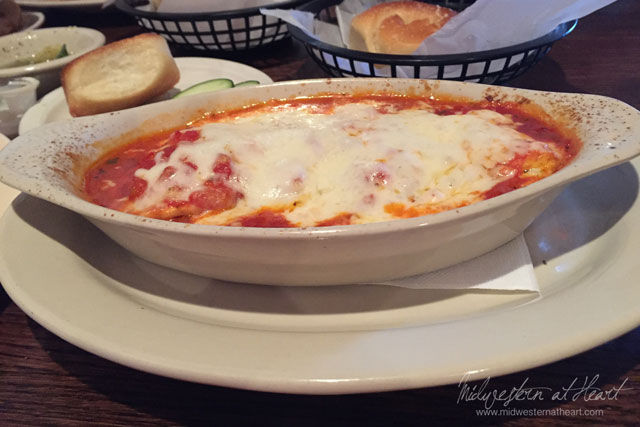 So the food was Really good. I noticed that Wally with the Joplin Globe mentioned that all the bread, pasta and sauces were made from scratch. While we were there we were surprised that not many people were there. They said that the opening of a new steakhouse in Joplin was causing them some issues but hopefully this fall when it cools down, business would pick up.

That afternoon I went to a friend’s house to shoot some photos of her new granddaughter then off to class. While I was in class studying/talking about The Code of the Woosters by P.G. Wodehouse… 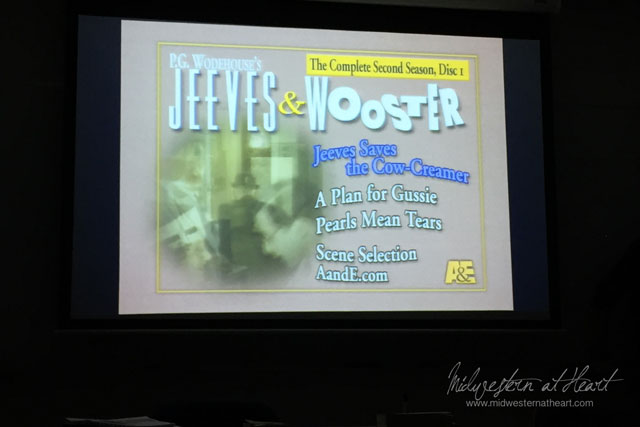 Hubby got off work and went to weld on some projects with Jared that will be offered at our local Chili Cook-off to raise money for Christmas for Kids. They made a Boot Rack. I found something similar to this years ago and showed hubs but they did it off their own design. 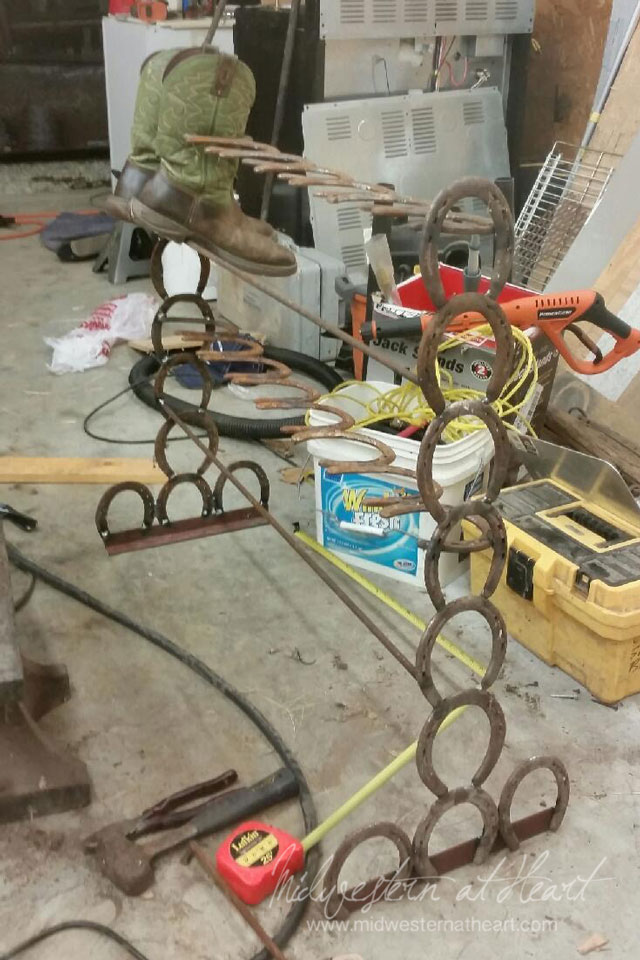 Deb found the Horseshoe Christmas Tree on Facebook and showed them and I found the pumpkins. 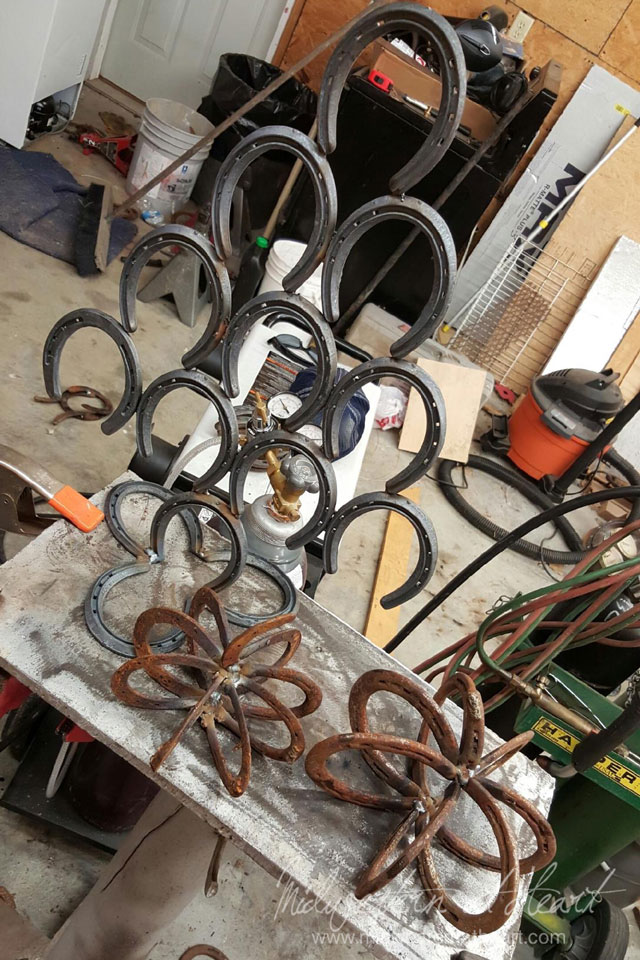 Another view of the Christmas tree. Now picture ornaments dangling in each shoe… and maybe paint, maybe not. Either way it’d be finished then :). 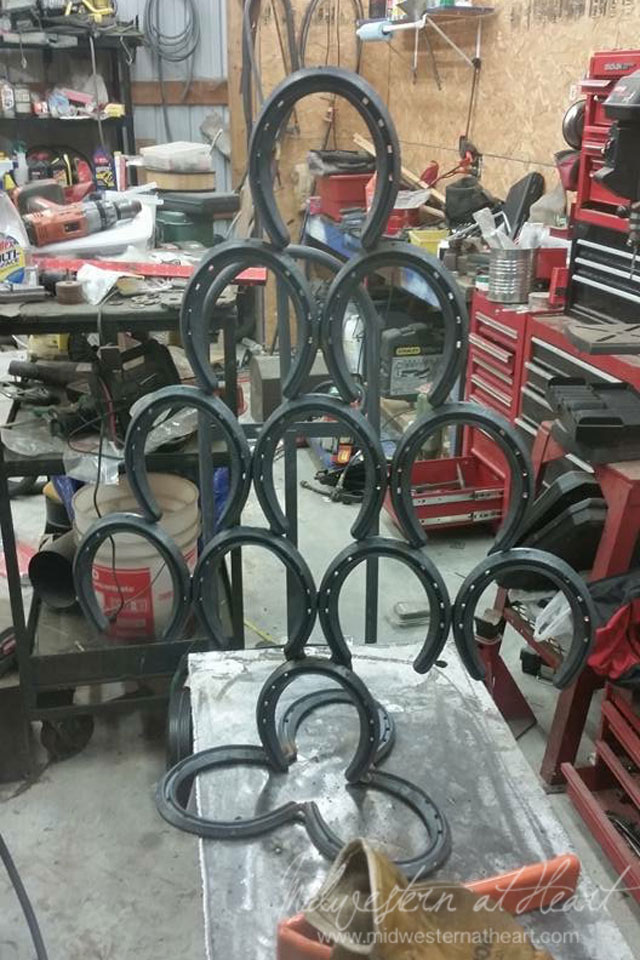 So as this post started off, I am so appreciative of my family and friends who help me, back me up, root me on, and keep me going time and time again. This is just a Thank you to you!