My mom’s job has her traveling all over the country and world for that matter.  She recently went to New Orleans and I asked her to take photos.  I also asked if she’d be willing to do a guest post about restaurants… And boy did she ever.  I’m going to turn it over to my beautiful momma today to talk about Muriel’s Jackson Square.  Take it away!!

Lots of restaurants have a “hook” enticing patrons to dine with them rather than the competitor down the street. This hook may come in many forms: décor, menu, live music featured on the weekends or a combination of several.

Last week while working in New Orleans, I had the pleasure of eating at Muriel’s Jackson Square.

They claim to be haunted!

Muriel’s history started with the original property owner, Pierre Antoine Lepardi Jourdan, purchasing the property in 1789, and subsequently building his “dream home”. Unfortunately, Mr. Jourdan had a gambling problem and one ill-fated night in 1814, lost his beloved residence due to a bad card hand during a poker game.

Vowing to never leave his home, he committed suicide on the second floor the night before he was to be evicted from the premises. Thus Pierre Antoine Lepardi Jourdan walks his home forever.

Waiters (or is the PC word servers?) at Muriel’s have the touch of fine dining captured….. as you are seated, they retrieve the fabric napkin which has been artfully folded at your place setting, and gently place it in your lap. It’s been so long since I’ve had this experience, I’d nearly forgotten how to react. For a split second, I was starting to wonder what the server was going for. Where I’m from anymore, linen napkins aren’t an option. You’re lucky to get a paper one that has been made of recycled paper products wrapped around your fork (forget getting a knife) with a self-stick paper band. Plus, if the menu mentions anything with the word B-B-Q sauce as a main ingredient, you might just find a roll of kitchen towels donning a wood dowel rod at the end of a picnic table. Guess I shouldn’t complain though; beats using a shirt sleeve or pants leg.

Muriel’s menu states their fare as contemporary creole dining. Once I heard there was the possibility of a ghost sighting, I wasn’t too sure what excited me most… the food, the ghost, or both!

I finally settled on “the food”. I felt it was a sure thing. The ghost could be iffy. 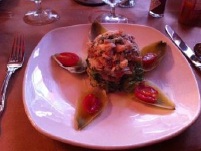 It’s always a crap shoot for me when going to a really cool restaurant knowing what to order (because I might never eat there again). I went with the seafood and artichoke salad (jumbo lump crab, gulf
shrimp, roasted redfish and artichokes, tossed with herb vinaigrette and served on romaine lettuce).

A co-worker along on this journey, had ordered the Wood Grilled Beef Tenderloin Salad (with shiitake mushrooms, blackberries, tomato and basil, tossed with baby arugula in a sherry vinaigrette and topped with shaved Parmesan cheese).

Of course, I threatened to stab him with the fork of his choice, if he attempted to eat it before I could get a picture. As you can see, I put the fear of God into his appetite…. LOL!!!

The other person along on this work trip was my boss. I thought I should be a tad more tactful with him. Let’s face it, “stabbing supervisor” probably wouldn’t look all that good on my resume when standing in the unemployment line.

He’s pretty congenial and provided I didn’t dawdle with F-stops and such, he waited for me to get a picture of his Shrimp Creole (Louisiana shrimp, simmered in a classic New Orleans sauce with popcorn rice). Using my iPhone (or iFone), I hurried taking the picture so he could eat before his meal got cold. 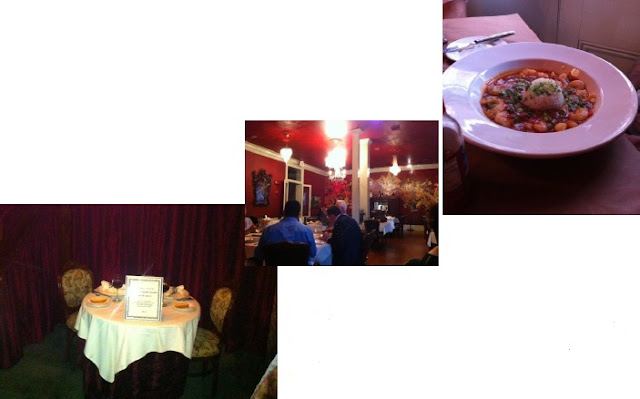 Although there were other guests in our dining room, I never felt the presence of Pierre Antoine.

Supposedly he made his where a bout quite apparent until his own private dining room area was established several years ago.

Every day the table is set with fresh linens, plates and cutlery (as if for any master of the manor).

As a rule, Mr. Jourdan still resides on the second floor. But whether mad, mischievous and playful or just making himself known, it is reported he can be observed as an unexplained glass in the bar area might fly across the room, a distance of 12 feet hitting a brick wall and shattering. Or in the Séance lounge on the second floor, described as a long cylindrical luminescence with sparkles, no defined legs or arms, but yet his image caught best on film. 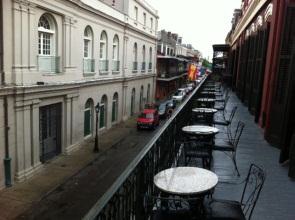 In addition to several gorgeous and unique dining rooms, private wine room, a Séance lounge and reports of Pierre Antoine on the second floor, there is access to the 140 foot wrap around balcony; the last public access balcony overlooking Jackson Square. There are many to be sure, but are privately owned, mostly by apartment owners (which during Mardi Gras, are some of the most sought out people on the planet having friends they didn’t even know they had). 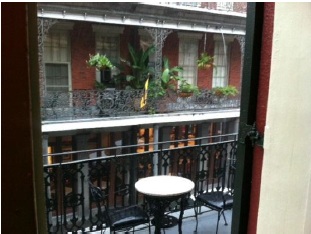 It is reported that “all of Muriel’s Jackson Square spirits are friendly, playful and fun”. I happened to be there for the tour and lunch…. I don’t think I saw Pierre Antoine Lepardi Jourdan, but the food was definitely worth it. If the opportunity presents itself, I’d not skip a heartbeat and go again.

I was asked to be a guest contributor this week…. but am I? Or am I really a GHOUST writer this week???? You decide.

“Like” them on Facebook!
**Again these opinions are all my own.  They don’t know me.  Plus all pictures are mine taken with my iPhone unless otherwise stated**