{one}
I have a really bad headache 🙁

{three}
I had reward points to use at a retailer or they expired at the end of the month.  So I told my husband how much he could spend.  Well my rewards points were in my maiden name so we changed that over.  I placed my order, got a bill saying what I owed (sales tax & shipping) and I went on.  Then I checked my cc on Saturday and they charged the WHOLE order my CC.  I wasn’t a happy camper at all!!!  Then I got to work this morning and received an email saying that the billing address was in my husbands name.    I’m so baffled because no where in any of this did I ever put his name.  I did it all under my name.  Oh well I received the package and got a credit to my CC.

{four}
I think Audrey wanted to play with the chickens over the weekend… or maybe have them as a snack… I’m  not sure which one.  She didn’t get the chance to do either. 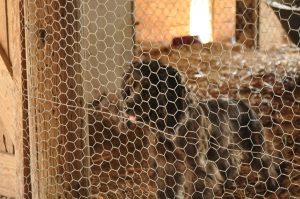 {fiver}
speaking of chicks, they got moved into their big pen.

{six}
Oakley didn’t seem to concerned with them.

{seven}
I got a shot over the weekend in the butt that hurt!  I wouldn’t recommend doing that shot if you can avoid it.  I actually got 2 so I’m not even sure which one it was that actually hurt!

{eight}
Have I mentioned I have a headache?

{nine}
This was my view Sunday morning while PC was mowing the lawn.

I was laying on my {step}daughters trampoline waiting to move it for him. 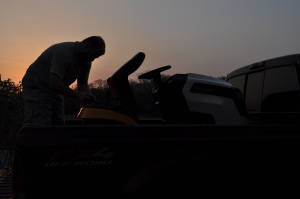 {ten}
Hi, my name is Nicole and I’m an Instagram addict… LOL

{eleven}
I have strawberries sitting on my desk waiting for me to eat them!  nom nom nom

{twelve}
I helped my friend Aerielle (Earl as we so affectionately call her) make Chicken Cordon Bleu this weekend.  I’ll share the recipe with you sometime later this week 🙂  We also had Potato Casserole I’ll share 🙂

{thirteen}
I took photos and she was like, boy this is weird!  I told her she’ll get used to it 🙂  She said, well at least I got my nails done yesterday.

{fourteen}
I sat in the hottub yesterday in the nice cool sprinkley shower we were having.  It felt wonderful!

{seventeen}
We broke down and got a new vacuum cleaner.  Our other stunk when you turned it on!  Yuck.  I semi-enjoy vacuuming now 🙂

{eighteen}
We went out to dinner with my parents this weekend and went to a local Hibachi grill.  It was fabulous!  So they have this seafood sauce and then another sauce they usually give you.  Well my husband and I prefer the seafood sauce so we asked for just 2 of those.  Then my husband asked if he could have another tray of it and the chef gave him a bowl.  Then asked if that was enough… LOL

{twenty}
I still have a headache in case you wondered 🙂

{twenty one}
The end for sure this time 🙂