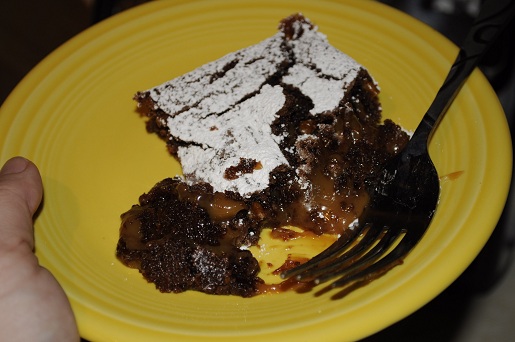 A few weeks ago I went to Atwoods and they have their bulk candy bin.  Yes, who knew a farm store would have bulk candy?  Well, I did :).  Anyway, I bought individually wrapped caramels.  I saw this recipe in the new PW cookbook and wanted to try it, plus she had it on her Food Network show.  Of course, I had to try it, right?

My mom has a recipe very similar to well so the day I decided to make these I asked hubby if he wanted my mom’s recipe or PW’s recipe.  He said I’d already tried moms (he hasn’t yet) so let’s both try PW’s and then we’ll try my mom’s another day.  Ok, whatever 🙂

They were pretty killer.  Maybe not enough to knock you naked, but pretty darn close… maybe.

Oh, and Hubby’s friend Robert was at the house.  Mark walks in and said so did you try them yet?  Yes!? Did they knock you naked?  And that was when Robert was ready to exit the building. lol 🙂

In a large bowl, mix together cake mix, chopped pecans, 1/3 cup evaporated milk, and melted butter. Stir together until totally combined. The mixture will be very thick. Press half the mixture into a well-greased 9 x 9-inch square baking pan. Bake for 8 to 10 minutes. Remove pan from oven and set aside.

In a double boiler (or a heatproof bowl set over a saucepan of boiling water) melt caramels with an additional 1/2 cup evaporated milk. When melted and combined, pour over brownie base. Sprinkle chocolate chips as evenly as you can over the caramel.
Turn out remaining brownie dough on the work surface. Use your hands to press it into a large square a little smaller than the pan. Use a spatula to remove it from the surface, then set it on top of the caramel and chocolate chips.
Bake for 20 to 25 minutes. Remove from pan and allow to cool to room temperature, then cover and refrigerate for several hours. When ready to serve, generously sift powdered sugar over the surface of the brownies. Cut into either nine or twelve helpings, and carefully remove from the pan.