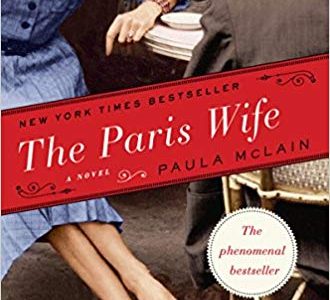 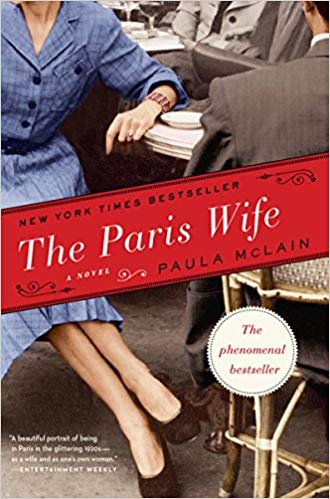 Gosh, for as many books I’ve read about Paris, I need to visit Paris. Truthfully, I want to visit 1920 Paris and 1940 Paris, not current Paris. Although don’t get me wrong, I’d love to see current Paris too. I think it is just all the reading of I’d about a Paris I’ll never truly get to experience.

The Paris Wife by Paula McLain

A deeply evocative story of ambition and betrayal, The Paris Wife captures a remarkable period of time and a love affair between two unforgettable people: Ernest Hemingway and his wife Hadley.

Chicago, 1920: Hadley Richardson is a quiet twenty-eight-year-old who has all but given up on love and happiness—until she meets Ernest Hemingway and her life changes forever. Following a whirlwind courtship and wedding, the pair set sail for Paris, where they become the golden couple in a lively and volatile group—the fabled “Lost Generation”—that includes Gertrude Stein, Ezra Pound, and F. Scott and Zelda Fitzgerald.

Though deeply in love, the Hemingways are ill-prepared for the hard-drinking and fast-living life of Jazz Age Paris, which hardly values traditional notions of family and monogamy. Surrounded by beautiful women and competing egos, Ernest struggles to find the voice that will earn him a place in history, pouring all the richness and intensity of his life with Hadley and their circle of friends into the novel that will become The Sun Also Rises. Hadley, meanwhile, strives to hold on to her sense of self as the demands of life with Ernest grow costly and her roles as wife, friend, and muse become more challenging. Despite their extraordinary bond, they eventually find themselves facing the ultimate crisis of their marriage—a deception that will lead to the unraveling of everything they’ve fought so hard for.

A heartbreaking portrayal of love and torn loyalty, The Paris Wife is all the more poignant because we know that, in the end, Hemingway wrote that he would rather have died than fallen in love with anyone but Hadley.

I could have taken an Ernest Hemingway class when I was in grad school, but it happened the semester before I was accepted into grad school. Because of that, I took William Faulkner instead. I think in a way I would have liked to have taken the Hemingway class. Sadly though, through a lot of this book, I referred to him as an a**hole. It’s true. He was married 4 times. This book focused on his first wife Hadley.

This was a Historical Fiction book. So it was fictional, however, it was based on real-life as closely as McLain could get it. Every once in a while though, the writing would get confusing. It wouldn’t specify who was speaking (Hadley or Ernest) and they both called each other Tatie. Now I could see him calling her that, but I don’t remember why she called him that.

It was a good book and while I knew the outcome, I was annoyed at the outcome too. It’s very easy to see and wonder why she allowed him to get by with as much as she did. Thing is, this is historical fiction and you truly never know what happens in a relationship behind closed doors.

So I’m very glad I read the book, although I still think Hemingway is an a**hole.