After we came back from Ft. Worth, I swear we all came down with the plague that everyone I know is fighting.  Ugh! In fact, here I am, still fighting it. It’s awful! But enough about that….

Three days before Christmas Abug and I decided we needed to work on Santa cookies. Santa was coming and with his long flight across country and the world, he needed some good sustenance, so we went with making Red Velvet Peppermint Kiss Cookies. We figured he’d get Chocolate chip everywhere else so we’d give him something a little different. That’s the way we roll in this house.

And might I mention, my kid is a country kid, but she’s worse than her mommy about having dirty hands. Making the Red Velvet part of the cookies, the food coloring along with some of the oil transferred to her hands (and mine) and she hated that! WOW! 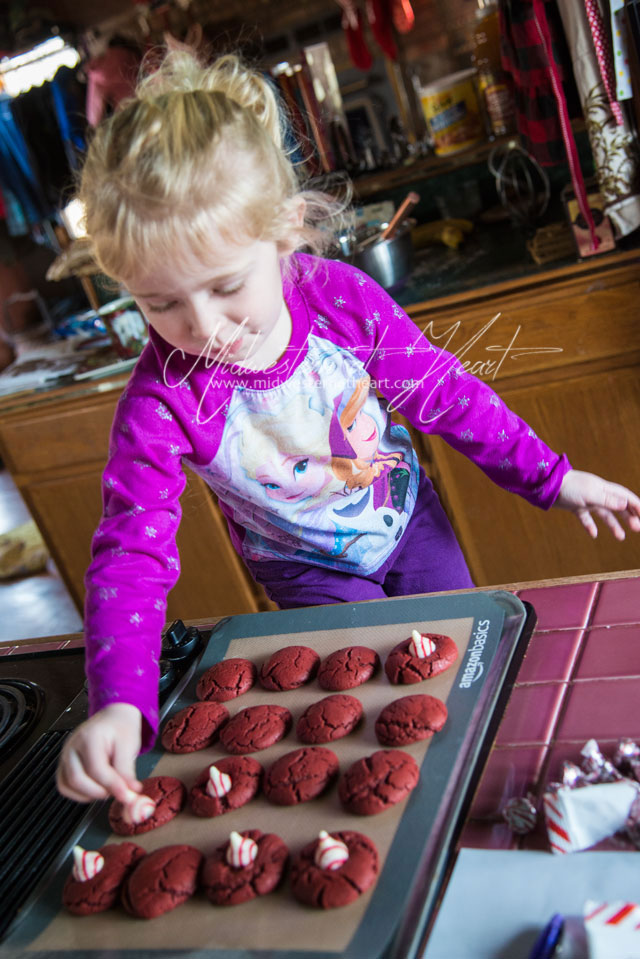 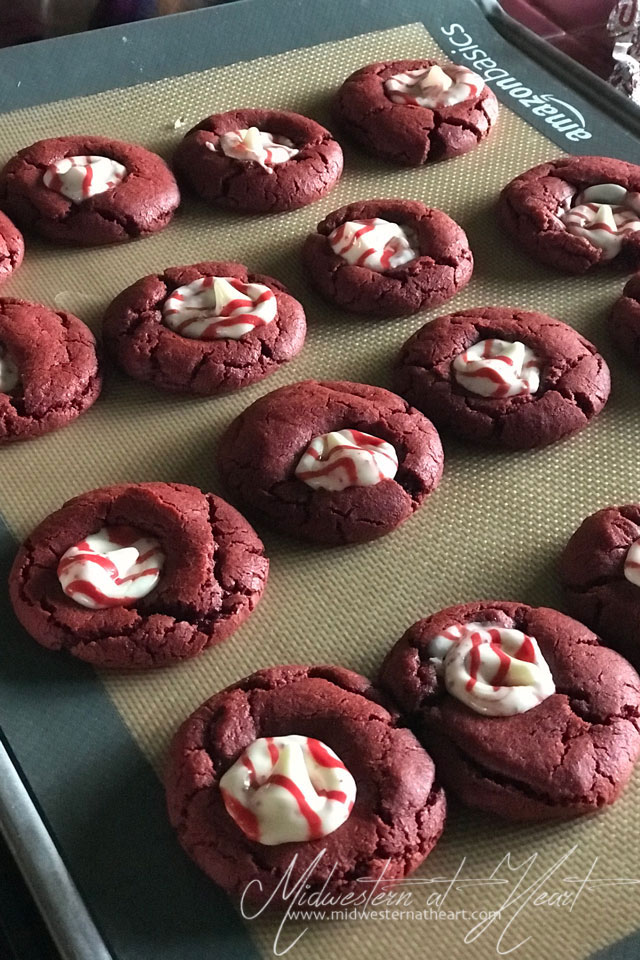 AC and UB came up a couple days before Christmas. So Saturday before (Christmas Eve, Eve) we went out shopping. That was a fun trip except this happened. 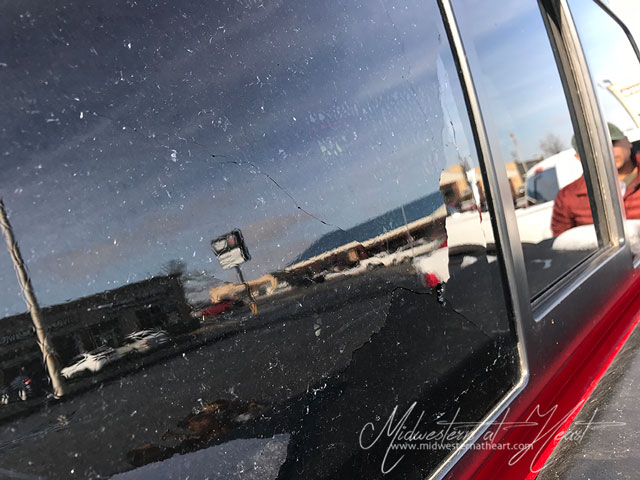 Can’t tell what you’re looking at? Okay, here’s a picture from the inside of the truck. Yes, my black glass shattered. Oddly enough only a couple pieces look like their missing out of that mosaic, picturesque window… but ugh! Merry Christmas to me. Hubby thinks somehow moisture got in there and I hit a bump or something just right and it just shattered it. 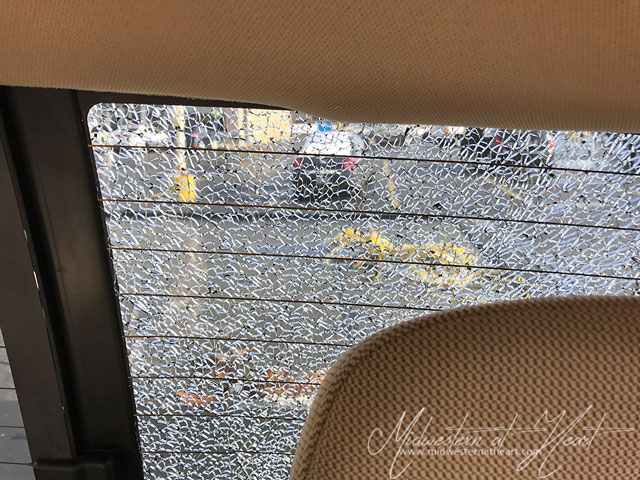 That night we all met up at a local steakhouse for dinner. After dinner hubby, Abug, and I went out to drive through the Christmas lights. There is a… well… I don’t know what it really is, to be honest, but I know every year in August thousands upon thousands of Vietnamese come to town for a huge festival here. Anyway, at Christmas time they do a HUGE Christmas lighting display. We try to make it through every year, but we don’t make it every year. This year we had a few minutes so we ran through it.

Gosh, we came in from the East which was a good thing. If you came in from the west, traffic was lined up 6-8 blocks long waiting bumper to bumper to get in. And the funny thing about that story is there is a 4 way stop just down the road and at that there were cars lined up to the South and West and East to get into that line-up. It was a madhouse! 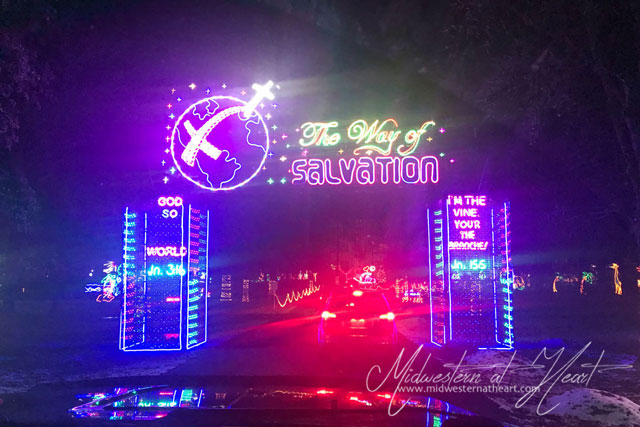 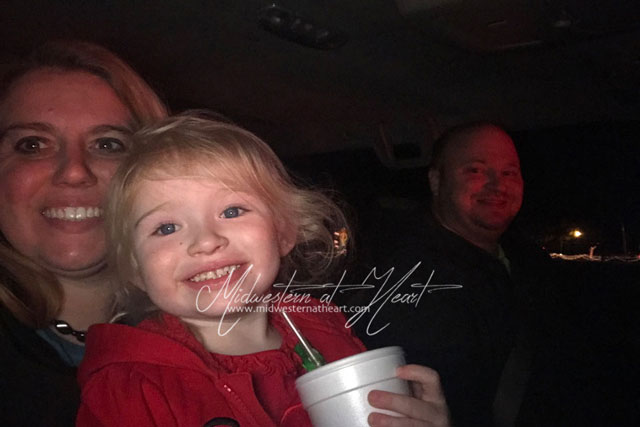 Christmas Eve, there was a Chiefs Game that we didn’t go to. Btw, they won 29-13 over the Miami Dolphins. Go Chiefs!

We stayed home and worked on cooking dinner all day long. We had BBQ Meatballs, Artichoke Dip, Salsa, Corn Salsa, Ribs, Bacon Wrapped Green Beans, Rolls, and I forget what all really. Abug even made AC a birthday cake since her birthday is 3 days after Christmas and they had to go home Christmas Day as AC had to work the next day. 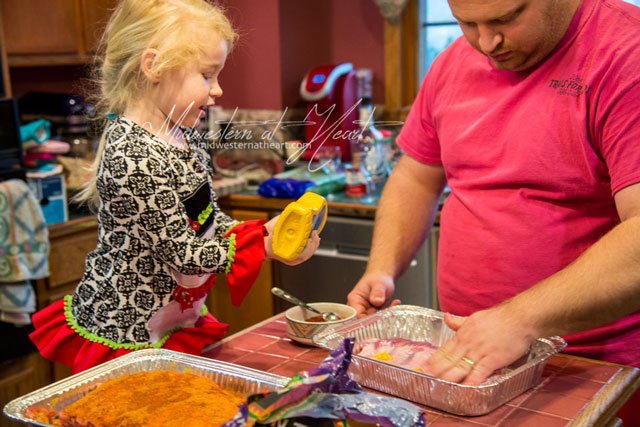 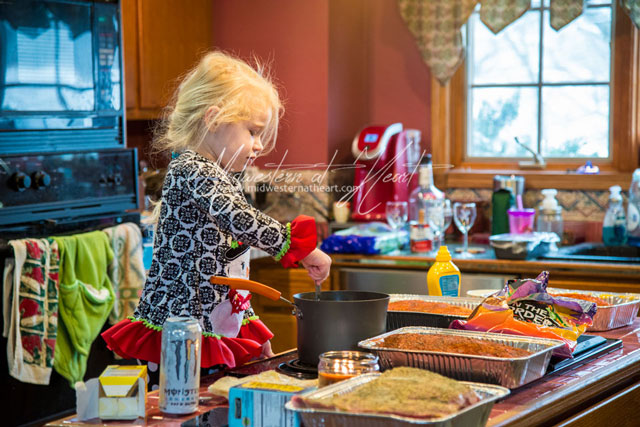 We actually had a White Christmas this year. It snowed overnight between Friday night and Saturday Morning. Abug is infatuated with snow and making snow angels. Probably stems from Frozen. Anyway, she hadn’t really had much of an opportunity to make snow angels, she did try Saturday night (Christmas Eve, Eve) but it didn’t work so well.

So, Christmas Eve, she laid down in the middle of the floor and demonstrated to us all how to make a snow angel. 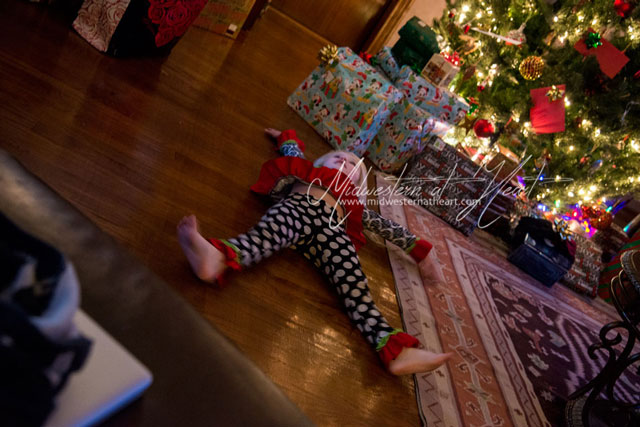 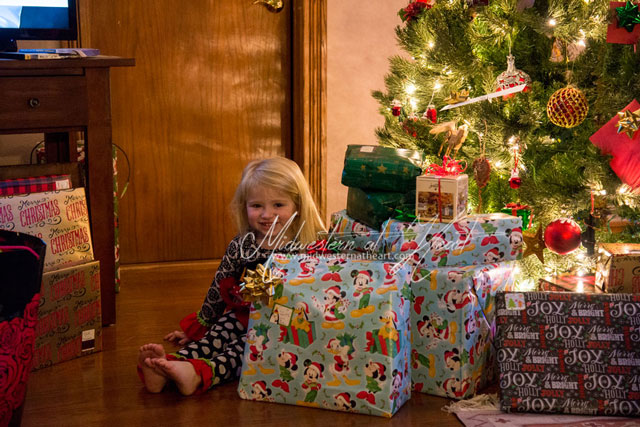 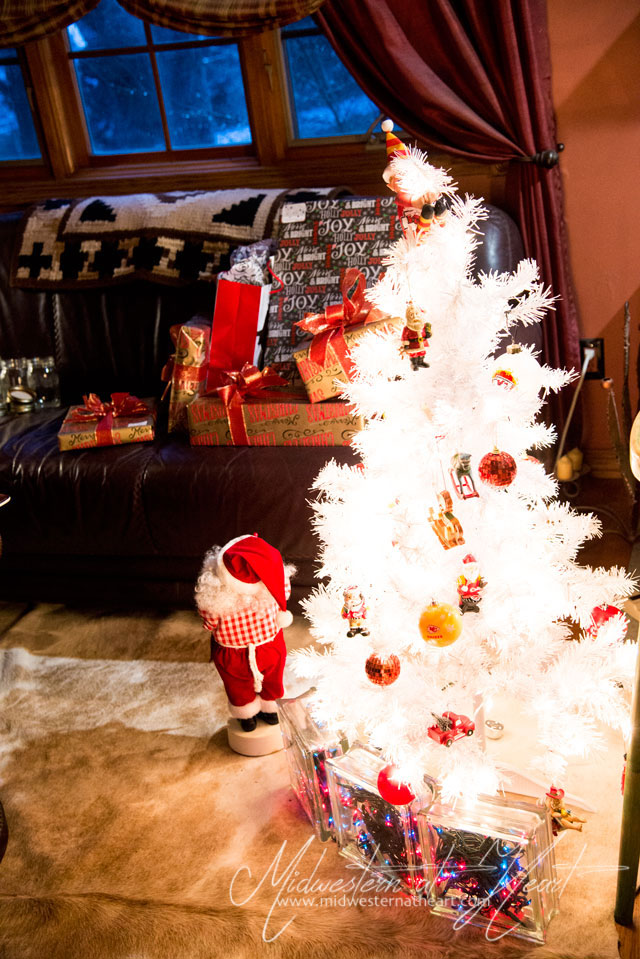 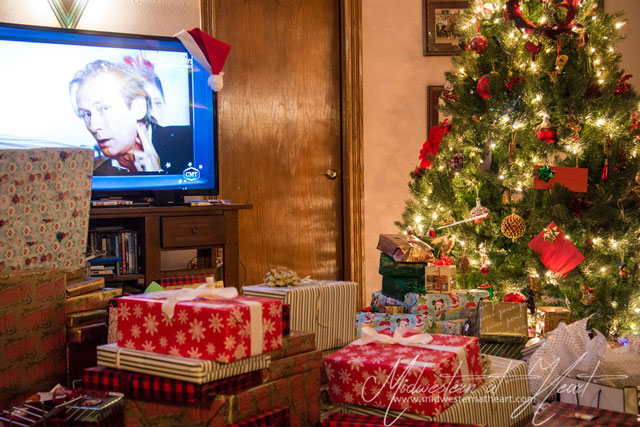 This summer AC and UB went to Georgia and South Carolina on vacation. I guess in Georgia there is this bakery called Back in the Day Bakery. They have released a couple cookbooks. AC sent one of the cookbooks to me (read that as us). So far I had only made pancakes out of them (Abug and I are quite the connoisseurs of pancakes), but Abug took this opportunity to make AC’s birthday cake out of the Cookbook. It is a Chocolate Cream Cake with Dark Chocolate Ganache. YUM! 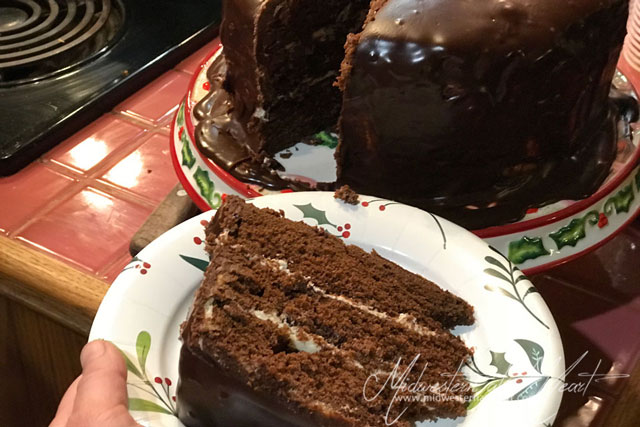 We finished out the night playing Guesstures. OMG, if you’ve never played this game, run to the store and buy it now! I’m not sure we’ve ever laughed so hard! It was a lot of fun. I volunteered to be on the boy’s team. We won! 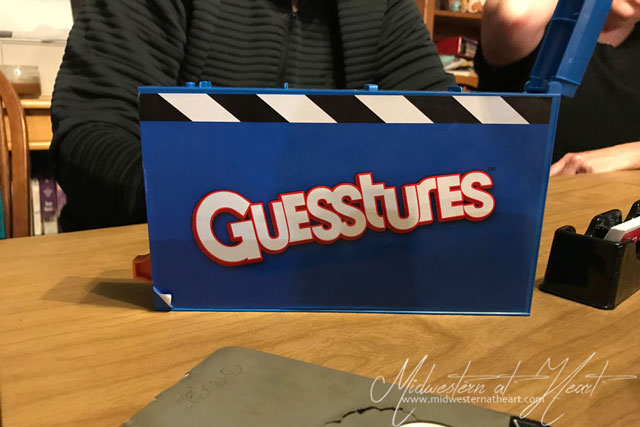 Our Christmas presents waiting for Christmas Day when Tbug got here. This was her year to be with her mom on Christmas Eve/Christmas morning. 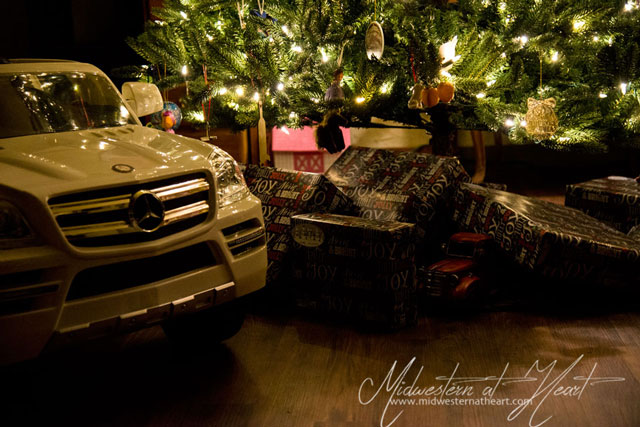 What do I spy… a Santa Cookie plate empty and Santa presents waiting for Abug. Oh, and don’t you leave bubbles out for Santa to play with also? 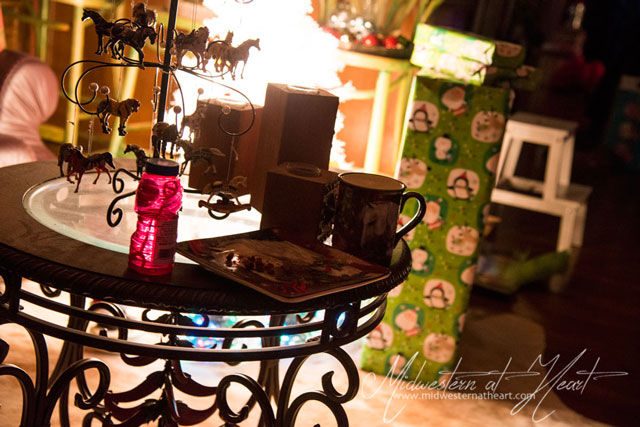 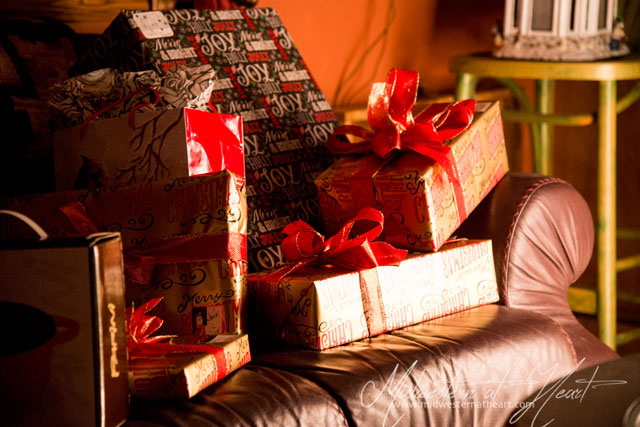 All Abug said she wanted when she sat on Santa’s Lap was a Barbie Doll Dream House. Well luckily Santa thought she was a good girl and that’s exactly what she got! 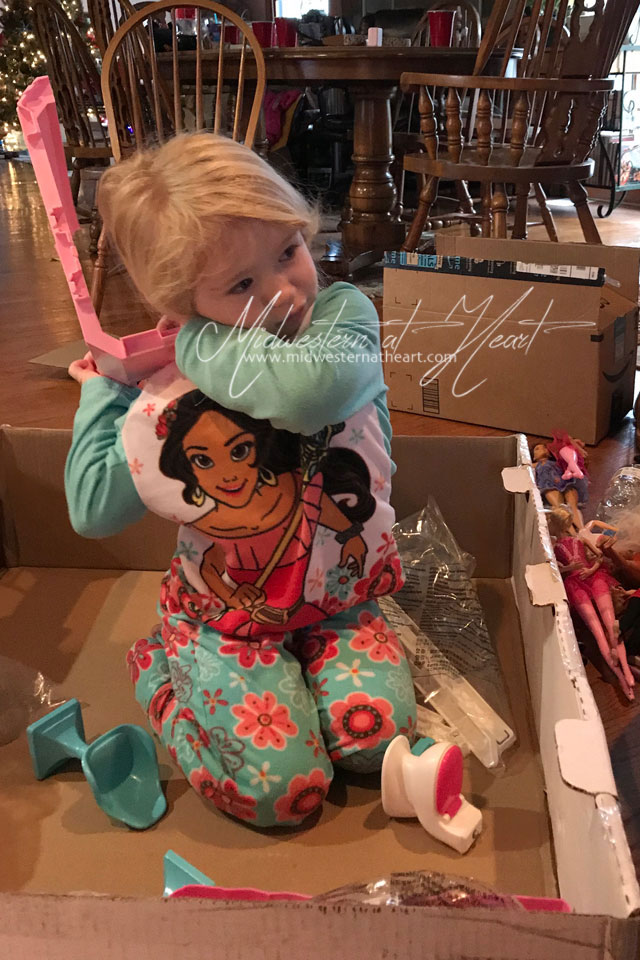 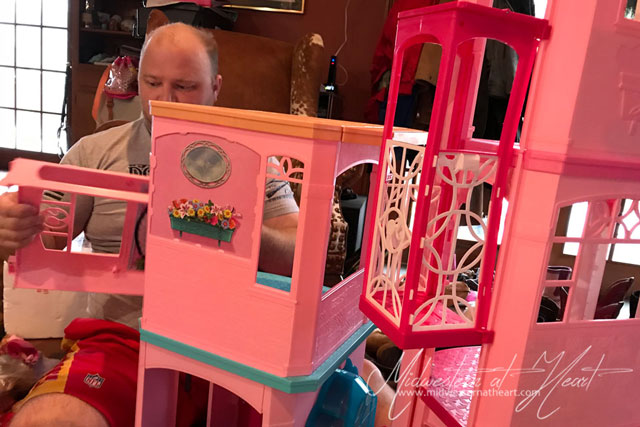 Christmas morning we always go to my Grandma’s house for breakfast and then presents. 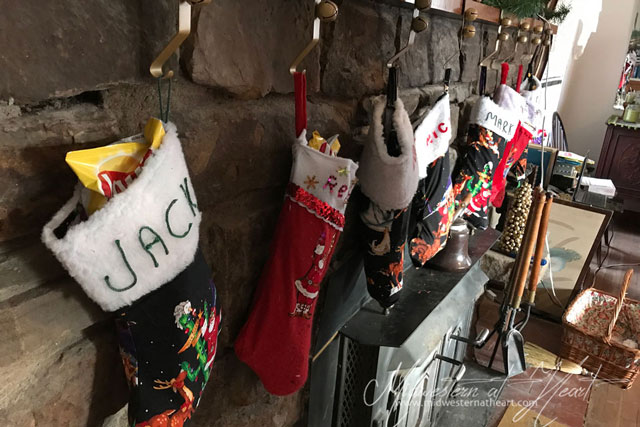 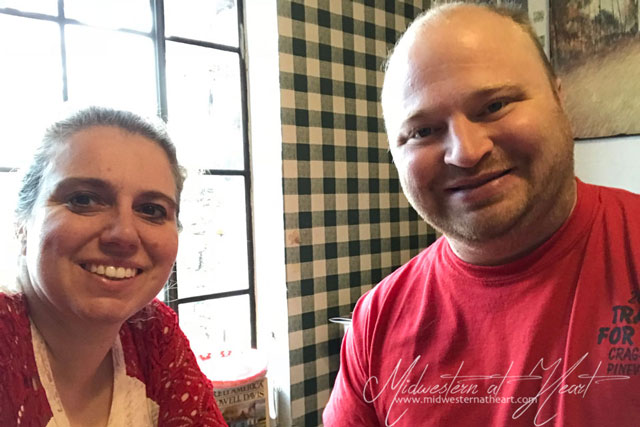 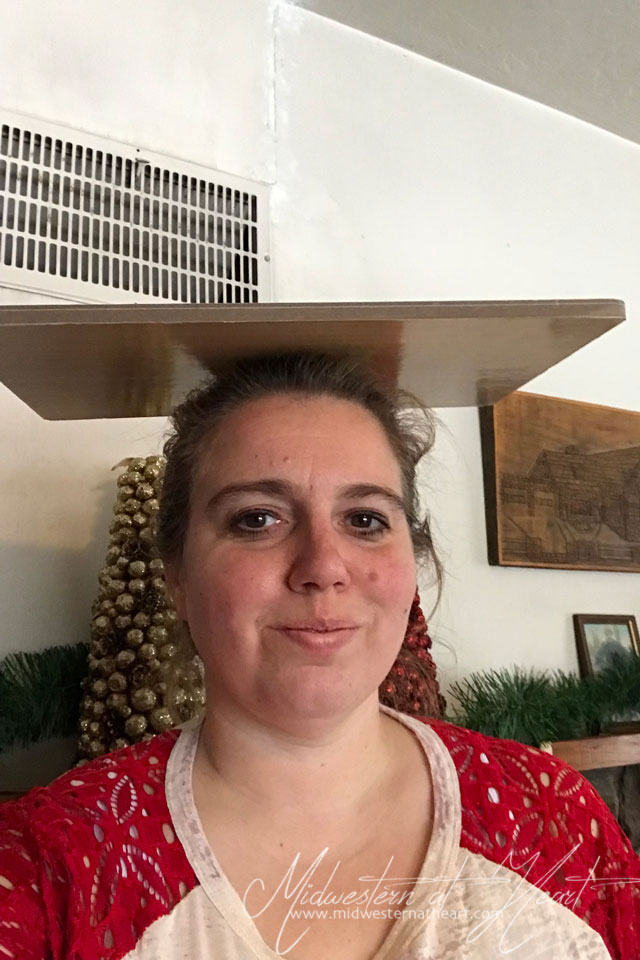 No, I didn’t put the jeans on his face. I just need to set the record straight. 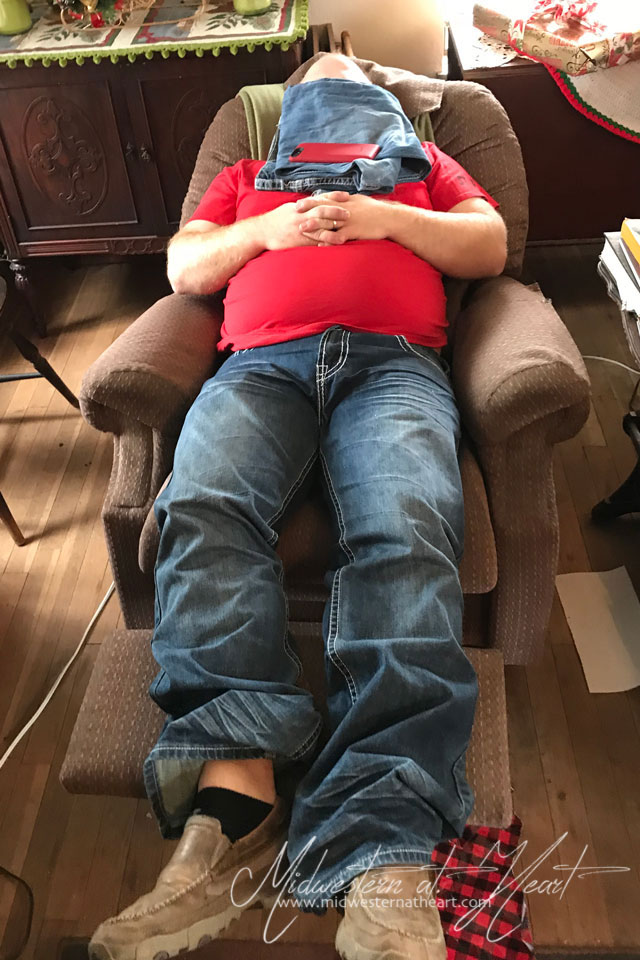 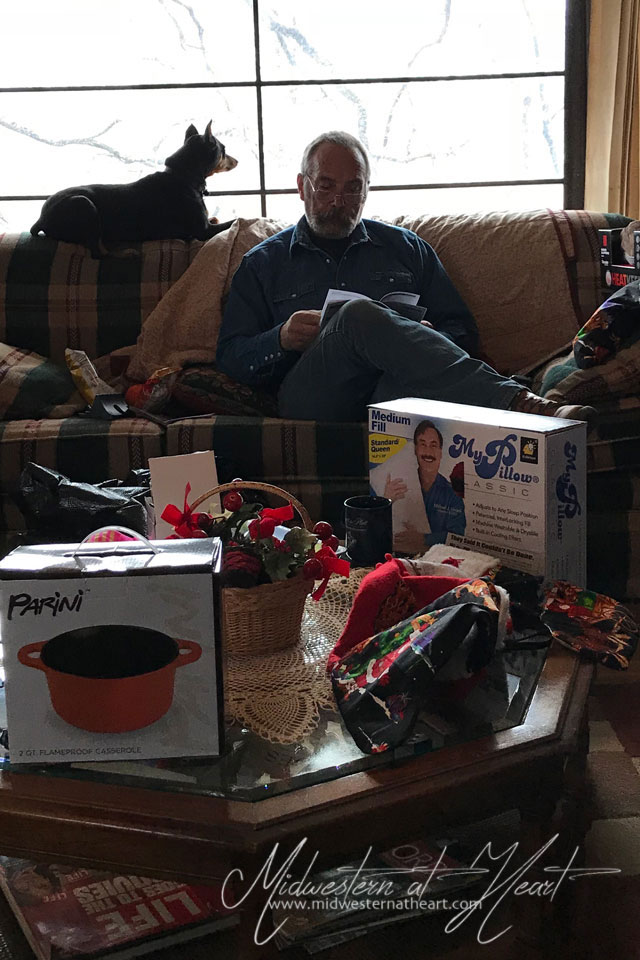 After we left Grandma’s, hubby went to get Tbug while I stayed at the house, picked up a little from the night before and then moved our presents up from the basement to the upstairs tree. AC and UB came over for a couple hours before they had to leave to head home. They also got to see Tbug open her Christmas presents from them!

Oh, what’s this picture you ask? Well, I’ve been wanting a Bull Bar for my truck for oh gosh… before I even had a truck.. Yes, seriously that long. Hubby got me that and a light bar as well. 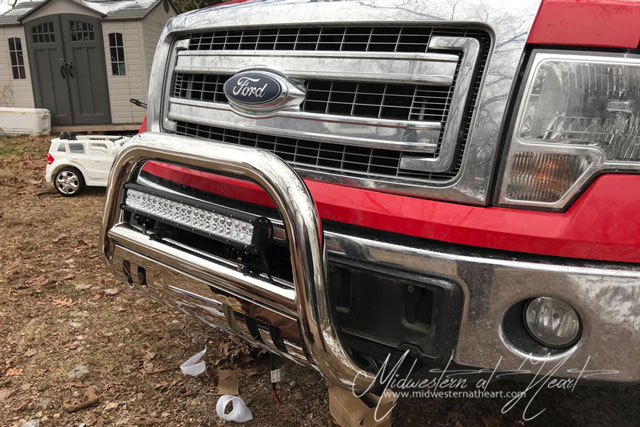 From Christmas at our house, we went to town to spend Christmas with hubby’s side of the family. Apparently, I only pulled my camera out to take one photo… of Wes and his pretty bow. Who knows. Christmas I was still recovering from this croup going around and by the time we got here I had no voice and could barely keep my eyes open. 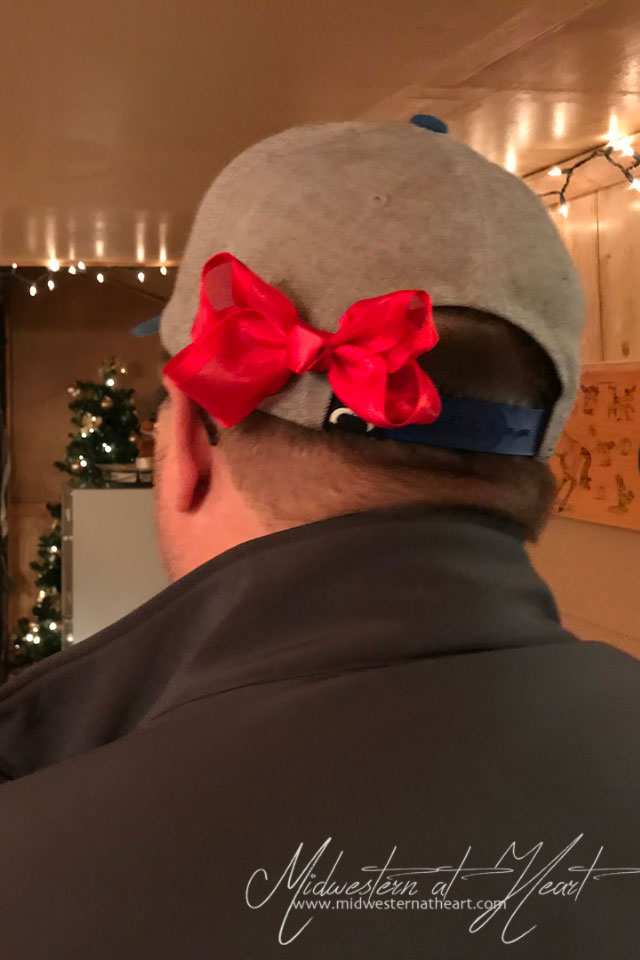