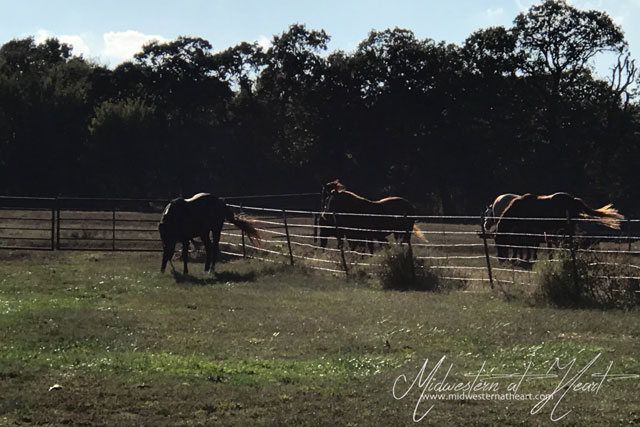 Horses are related to skunks. If that title doesn’t make you giggle or seriously question my sanity, I’m not sure what does or will.

Why on earth would I compare a horse to a skunk? Well if you haven’t been around horses much, you’re in for quite a surprise. My mornings consist of the same things… wake up, answer emails/read blogs, go outside and turn horses out, start the rest of my day. Not always in the same order and sometimes not for very long on any of the above, but one thing is always certain… I’m going to turn the horses out.

Why not? I mean, they enjoy the great outdoors, right? So… I still haven’t answered that question… why am I comparing the horses to skunks? My horses are trained. I walk in the barn, open the back door, open each individual stall door, and they walk themselves out the back of the barn. Then I close the back gate, get the stud and throw a rope around his neck (because most days I’m too lazy to put the halter on him), and walk him out to his pen.

But every time I get behind the horses, they fart on me. And their farts are rank. Heck, I could be saddling them, walk behind them from one side to the other, or even just brushing them, and they fart on me. If you’re a horse person, is this just something I bring out in my horses or are all horses the same? Asking for a friend of course.

And then our stud. He’s a piece of work. First off, there are two types of studs (those are the male horses in case you didn’t know….).

We have discussions with our studs. We tell them that they are going to be polite or they’ll be making a quick visit to the vet for a snip snip. So far, the talk usually works. Our current stud though… he’s a piece of work. We have two halters for him. His everyday halter and his “getting some” halter so that hopefully he’ll know to be on best behavior when he’s in his everyday halter.

Just this week, Mini Me and I got into an argument and I left him in his stall ALL.DAY.LONG. He upset me. I turned all the horses out, went to get him out of his stall, and he walked out into his run. I tried to coax him in. Notta. He decided he needed to take a crap. And the wind was blowing from the north so it blew the smell into the stall door where I was standing. ugh! More of that skunk.

I told him he needed to come in so I could turn him out. He looked at me and then turned his butt to me. I told him to get his *** into the barn right now so I could take him out, I had things to do. He then proceeded to smell his poop. He and I fought for 5 minutes and finally I told him I was leaving his  butt in the stall all day whether he liked it or not. The next day, his head was right at the stall door waiting for me.

But he really is a good stud. Like I said, I can throw a rope around his neck and walk him from his stall, out the front of the barn, and around the corner into his pen without many difficulties. One day… the wind was blowing and blew a blue tarp in the way of getting to his outdoor pen. He wasn’t too keen on that idea so since I only had a rope around his neck, he drug me all the way to the round-pen so I put his butt in there that day.

Another day I put a halter on him (very uncommon practice for me really) and I threw his leadrope down on the ground so he could eat grass in front of the barn while I cleaned stalls. I forgot I did this so about 10-15 minutes later I realized I didn’t know where he was. Then I heard horses squealing. I realized he had walked out to the side of the house to tease some of the horses in another pasture. Hey, we have like 17 horses. We’re kind of horse poor right now.

When I got over to where he was, he was just standing there eating grass. Like I said, everyday halter. After picking on them a bit, he was fine eating grass in the yard. Good stud. I’m not even sure our geldings (the ones who have had the snip snip) or the mares would be that calm.

Guys, I’ve grown up around horses. I love them to pieces. I couldn’t imagine my life without them. They have personalities just like humans do. Sometimes maybe even more so… But I do, I swear, horses are related to Skunks.

2 thoughts on “Horses are related to Skunks and other musings”