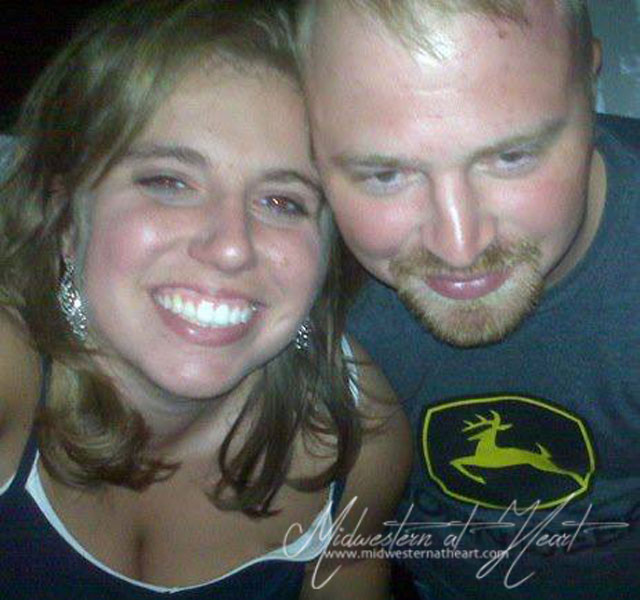 Oooh… should I be discussing my First Love and my First Kiss on the eve of my anniversary? Just wondering for a friend….

So… this is a fact I could use for tomorrow’s post… I was sweet 16 and never kissed. I really thought that was cool until I became that 16 years old who had never had a boyfriend nor had a kiss and then I just felt like a loser. So as a Junior who had never had a boyfriend or been kissed… I got set up on a blind date to football homecoming with a friend’s boyfriend’s friend. In fact, I think it might have been his cousin…

I didn’t know this guy. He was a year younger. I don’t even have a clue what his name is/was. Don’t worry, I did know at the time!

So… we maybe danced twice. He wasn’t interested in dancing I guess and I was shy. Like extremely shy.

So I went to leave the dance and go home. They (the blind date, the friend, the friend’s boyfriend) walked me out to my truck (yes I drove myself to the dance… I’m cool like that). He kind of immediately turned me off because he pulled out a cigarette and those turned me off. But he hadn’t lit it yet. He leaned over, kissed me, I immediately pulled away. Later that night or maybe the next day, I spoke with my friend and she was like, he wondered why you pulled away. He would have given you tongue. I had a nervous laugh and giggled saying… To say I was nervous/shy would be an understatement.

I never saw that kid again. In fact, I think I heard he dropped out of school, etc. No skin off my back.

As you can see from above, I really wasn’t your typical teenager who was all boy crazy. Sure, I wanted a boyfriend but it was probably because I didn’t want to feel like a loser. haha! My first celebrity crush (another tomorrow thing I could share on tomorrow’s post… oh well) was Jonathan Taylor Thomas. I just decided I should marry him and be done. Now I know that would work. He’s a vegetarian. haha!

So who knows who my first “actual” love was… but I can tell you one of my first loves was actually my husband. Que the gushy music! No seriously. We went to high school together. We knew who each other was, but our Freshman year was when we became comrades. It was sadly against a teacher we had. I liked the teacher, I was just one of those kids who didn’t like to be told she was wrong when she knew she wasn’t. Even more so when I could prove I wasn’t wrong. Yes, I was a nerd.

So, I had a teacher who told me I was wrong more than once and I could go in and prove I was right. So one day I started singing in class. This coming from the shy, quiet girl. No joke. I started singing at the top of my lungs, Garth Brooks’ Two Piña Coladas. Apparently, I was pissed. haha. My husband joined in. Prior to this, I found him annoying. But even though I found him annoying, I developed a crush on him. My friends would give me fits about him and I’d just push it away. You know how teenagers are. It was like he had cooties or something. haha.

As sophomores, we were back to being friends. One day he came up to me. I tried to impress him so I was leaning on a table talking to him, trying to act cool. The legs on the table collapsed and I went crashing to the floor winding up with all the notebooks on top of me and me flat on my back on the floor. I was embarrassed, gosh I was embarrassed. We went to Florida for Band during Spring Break and he and I got a lot closer as friends. When we got back, he even asked me out… but I wasn’t allowed to date until I was 16 and at the time I was 3-5 months away from being 16 so I was scared to ask.

As you’ve seen on the blog before, he came back one weekend with a girlfriend. I was just too ashamed to tell him I was scared to ask if I could go on a date. When he got a girlfriend, I immediately backed off. In fact, I basically quit talking to him altogether.

So there you have it….