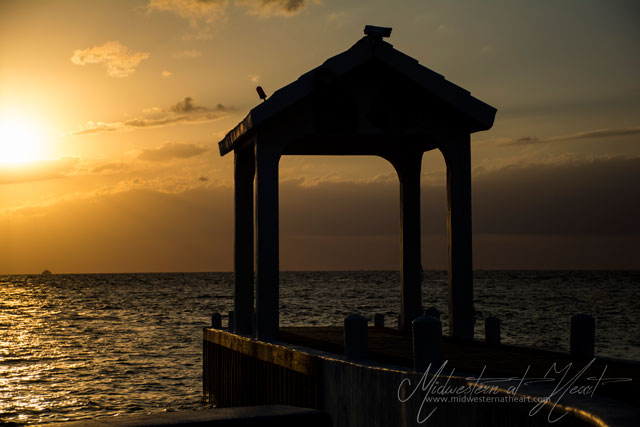 So the boy decides he wants to go to the end of the dock and do a giant stride entry. Mom isn’t sure the water is deep enough to do that. At this point, I hear the conversation and I know the answer but I didn’t totally want to say anything either. So I continued to listen.

The boy proceeds to put his fins on and try and walk down the dock in them, all while mom is saying that she doesn’t think it’s deep enough for him to do a giant stride entry. Now I have my camera in hand remember because I went to take sunset pictures, but I could have always taken pictures of him crashing face first too. I mean….. Luckily after one attempted step, he realized he couldn’t walk in the fins and took them off.

Meanwhile, mom and daughter are still trying to put together dive gear and discussing if they have it set up correctly, etc. I kept having to bite my tongue to answer them, not because I was trying to be a know-it-all, but just trying to be helpful.

Okay, so son walks to the end of the peer, puts fins on, does a correct giant stride entry, surfaces, puts air in his BC, and then swims back to where mom and sister are entering the water via latter. All looked correct. He gets a gold star for the day. Then I kid you not, Mom looks at him and says, “Did you make it?”

Here is where I about lost it people, because if he didn’t make it, I’m not sure he would have been swimming back to mom and sister. I had to hide my laughter and quickly get out of the area so I could giggle. It just struck a funny bone in me and I couldn’t help myself.

Now that I’m done being childish about it… Have you ever had any moments like that? Please share, I need a good laugh! Best medicine is a laugh a day (or 2 or 3 or 12).

One Year Ago.... cont'd
What have I been up to this week?
Book Review: Stone Promises - Samantha Christy
Mother's Day 2014