Labor Day… defined as a day to pay respect to those who worked so hard to make our country what it is. It’s a day of rest to honor them.

It’s also a day to mark the end of summer, which summer isn’t technically over until later this month… but that’s besides the point.

What else is it? A day to ride horses.

And we only had a slight rodeo that ended with road rash. OUCH! Karen hit the ground hard, but let’s not focus on that. Let’s focus on the target that Jared painted on Karen’s horse. It’s pretty and purple!! And I never did hear the story of why it was painted on there…. hmmmm maybe I should ask again. 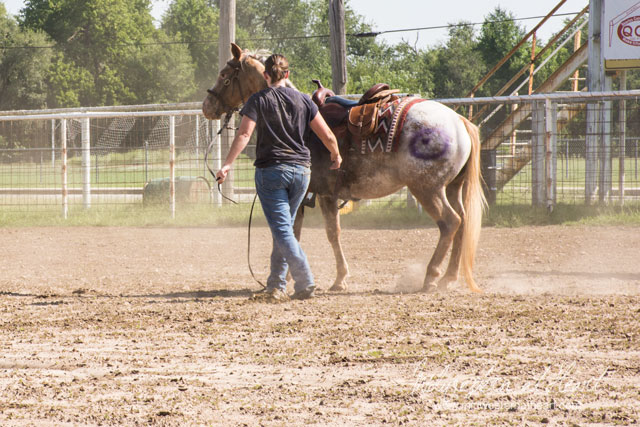 Then it was time to play with cows. Not cutting though, nope, this was Team Roping. Don’t ask me anything about that… I don’t know much about that sport. The most I know is most team ropers don’t like me. I’m not sure why… I promise I shower… ha! 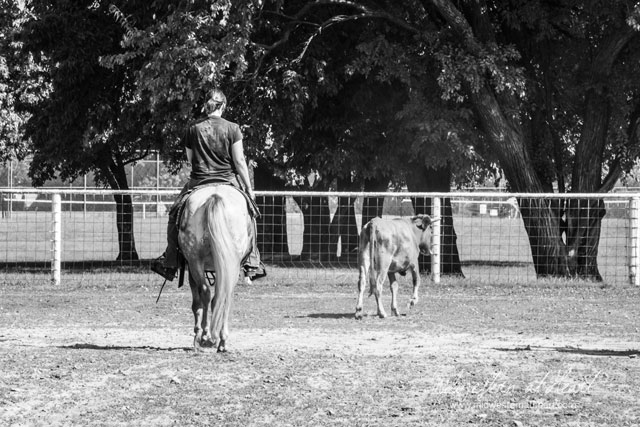 Here steery steery steery. Oh wait, no he was supposed to go in the gate at the far end of the arena and he wasn’t very cooperative. 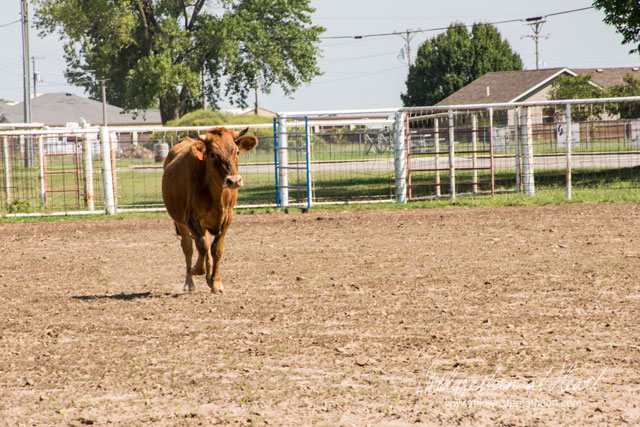 That’s okay, the fearless riders were on their way to help push him through. And with a little convincing he went through the gate. 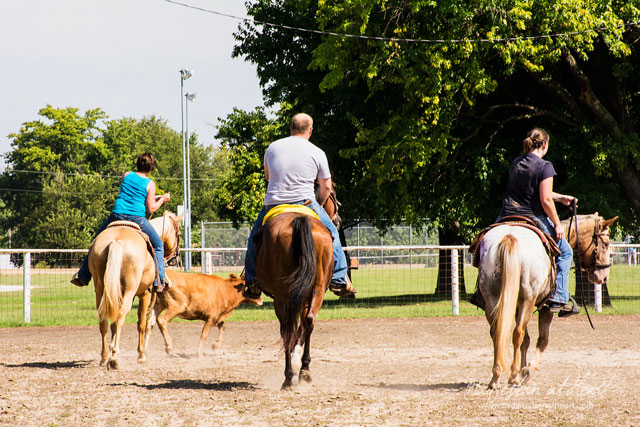 I even got to ride. Deb shared her horse with me. I know all about riding a Palomino!! 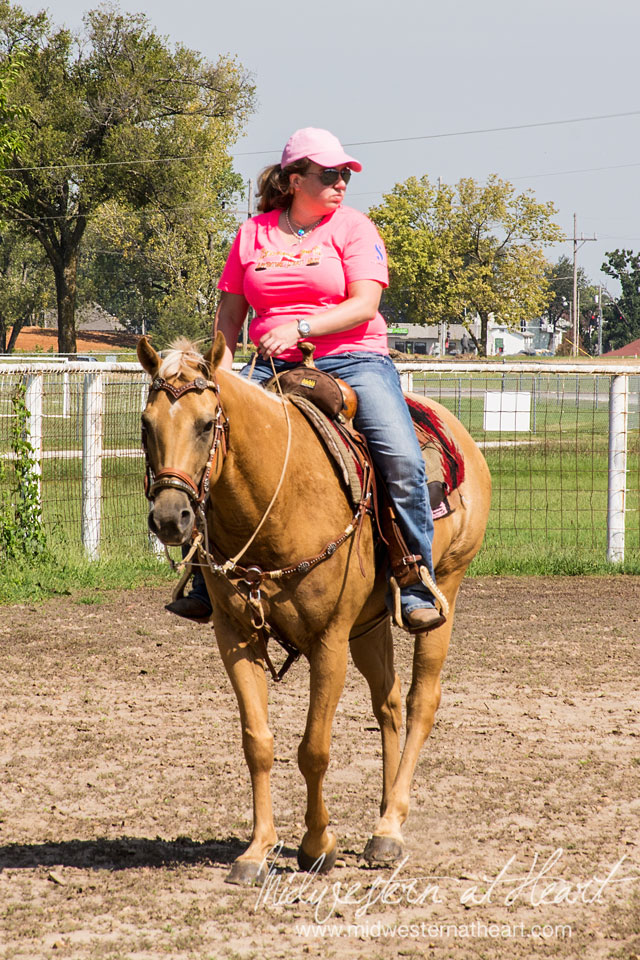 I didn’t take this picture… I don’t know what was going on here… but this is the box next to the shoot the cows come running out of. From there don’t ask me anything! 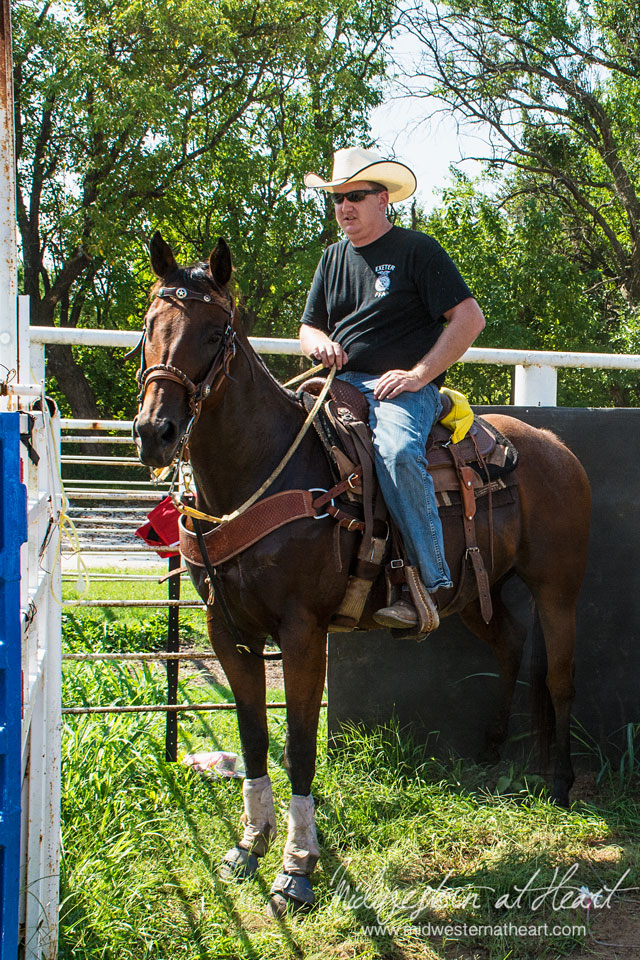 Abug even got her chance to ride. She was mad when Jared quit riding. Hey, the kid has great taste… Loves Water and Loves to Ride Horses! And don’t judge her fashion sense… her momma wanted to keep her cool, but she needed to wear her cowboy boots! heck yeah! 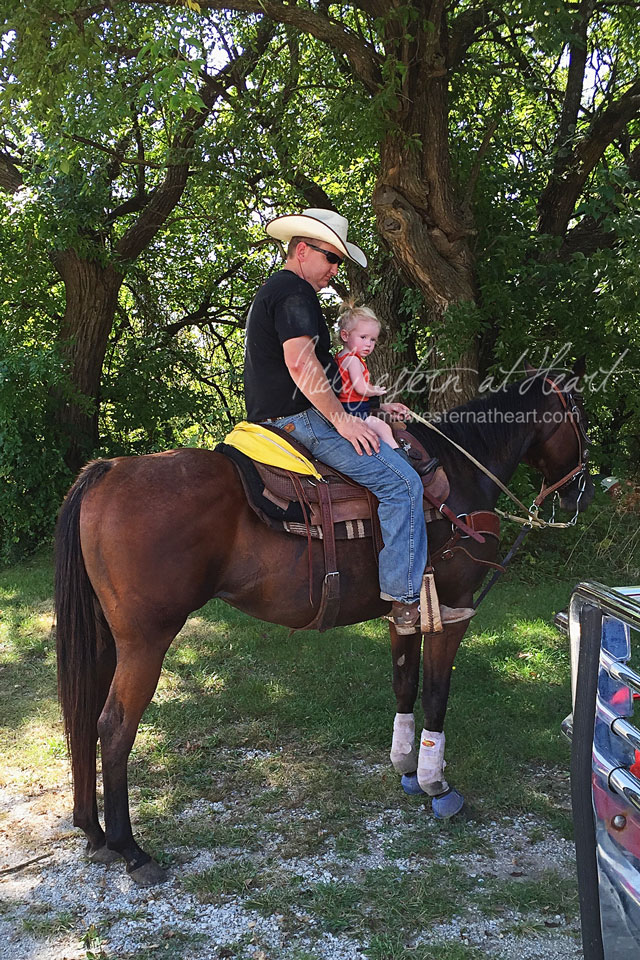 So something happened to Jared’s truck. I’m not sure what. Boy I don’t know a lot about the goings on during this day huh? Anyway hubby hooked his 1/2 ton Chevy up to the 1 Ton ford to pull it out from under the trailer.

To add insult to injury, the Ford didn’t get put in gear fast enough and the 1/2 ton Chevy pulled it without it being in Neutral which barked the back tires. It was kind of funny. 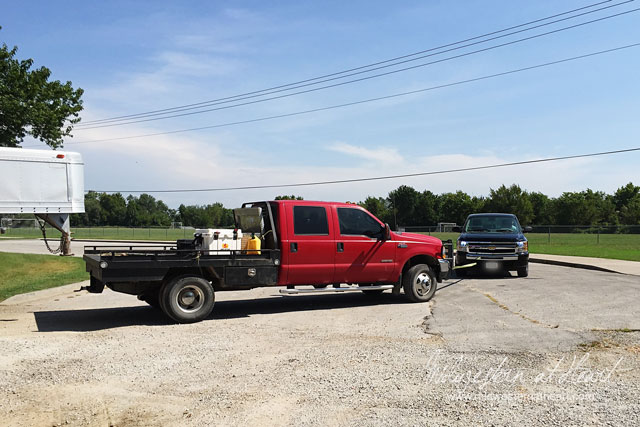 And if that wasn’t bad enough, the Dodge went to pull the trailer home. Hmmm…. 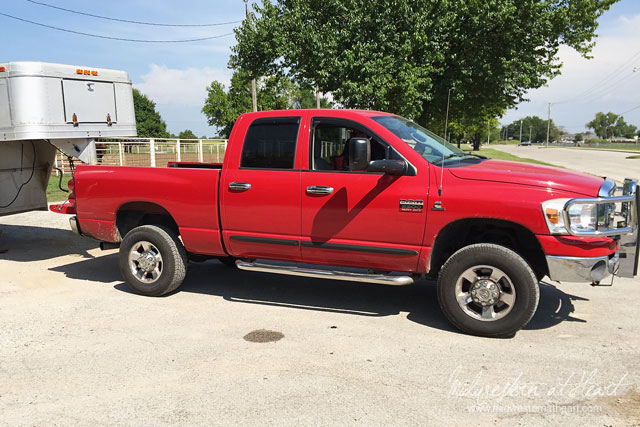 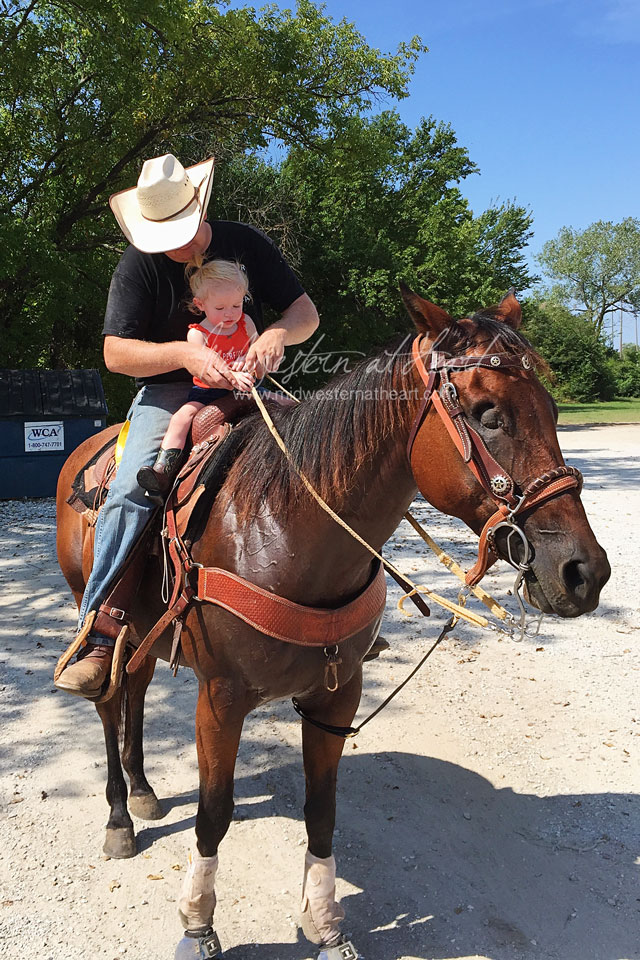 Now earlier in the day Deb had gotten ribs to smoke. Well next thing I know, the guys are talking about running to the store (read that as drive ;)) to get hamburger because they were going to make meatloaf. I didn’t know if this was for lunch or dinner or the halibut (you know that fish… he wants in on everything).

Anyway turns out they decided to smoke a meatloaf. Not knowing if it would work or not, they gave it a go. 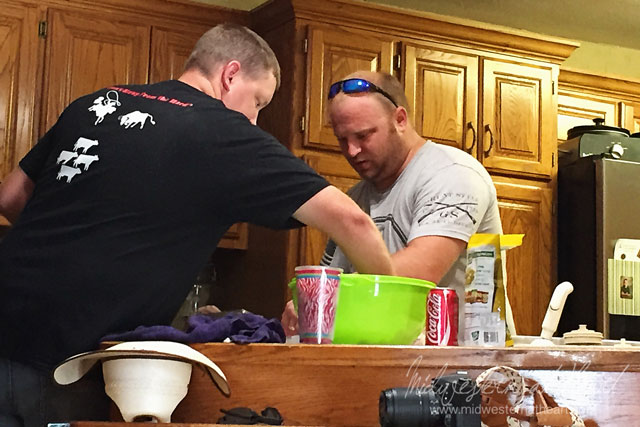 While I was sitting finishing up homework and studying for a test on Tuesday, Deb took Abug for a nap. For a while we heard them and then silence. When we walked in to check on them, this is what we saw. Wonder who put who to sleep?? 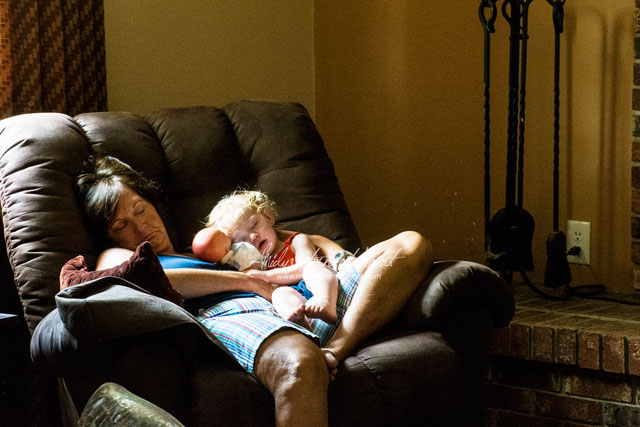 So for one of the sides Deb had corn. Hubby decided to make the Paula Dean corn. You schmear (technical term) it in Mayo, sprinkle with salt and pepper and Chili powder and place on the grill for 10-20 minutes until it’s done and bam, corn on the cob Paula Dean style. 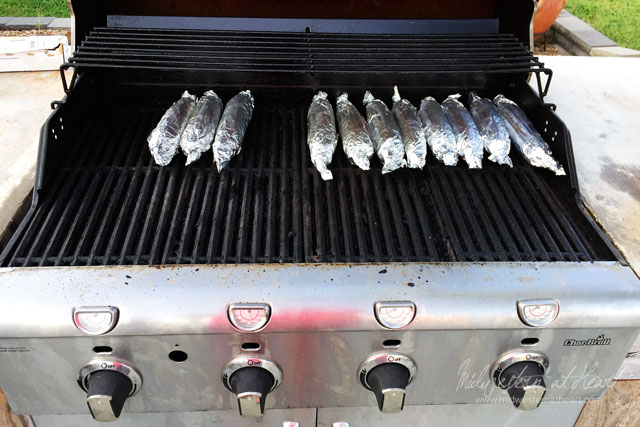 I forgot to take pictures of the ribs, but here is the meatloaf. Wow oh wow, this stuff was good. The bacon didn’t get crisp so if you like crisp bacon, this isn’t for you (bacon wrapped the outside of the meatloaf) but if you like softer bacon. Hello YUM! Just saying Abug even approved. 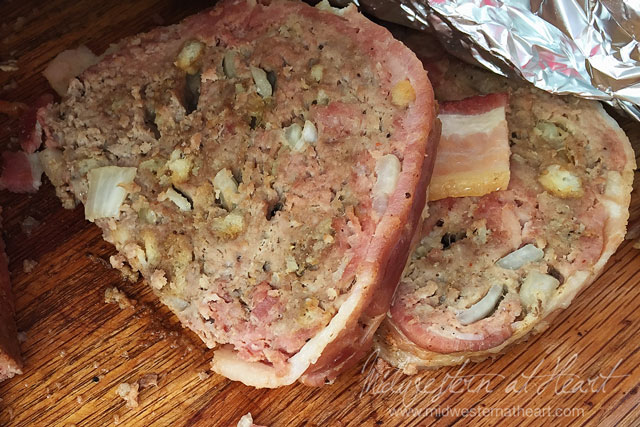 My MIL had made cookies for the day before (long story). They all wound up at Deb & Grady’s to go to the dive shop. Well…. they may have made it there (don’t know) but if so, there were a few less cookies. 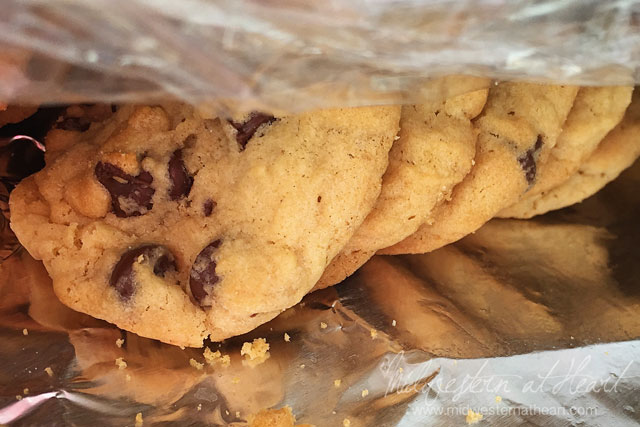 Hmmm…. I should have planned my pictures out in a more sequential order, but I didn’t. Garlic bread. Who doesn’t like garlic bread? If you don’t, just give me yours, I’ll eat it. Hmmm… maybe that’s why I can’t drop the last of the baby weight. Nix that thought…. 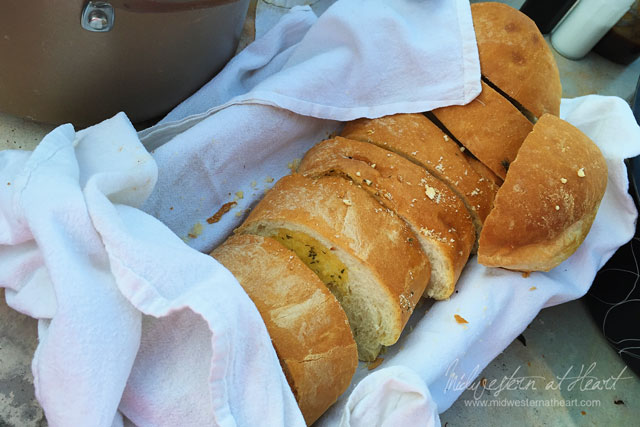 These potatoes wow oh wow. So I think Deb boiled them, added butter and dill and bam, potatoes. I don’t know, Abug and I were chilling in the pool. Then there were these No Bake cookies. Apparently extra peanut butter was used. Try that on for size…. or taste…. 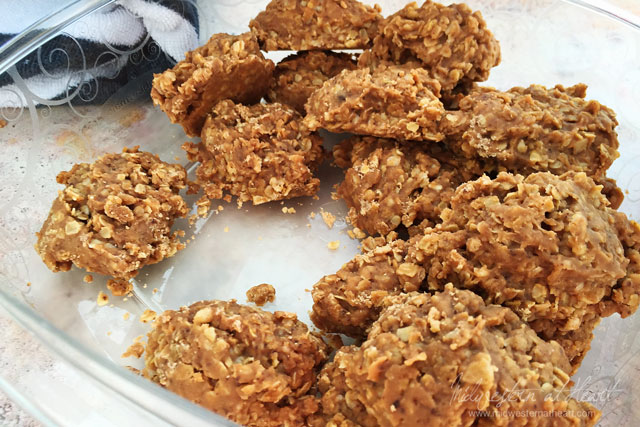 Pretty much someone was in the pool all afternoon and evening. Grady had a scuba class that evening. But don’t worry, Abug (and I) got in the pool. Me once, Abug twice. haha. The kid LOVES Water! 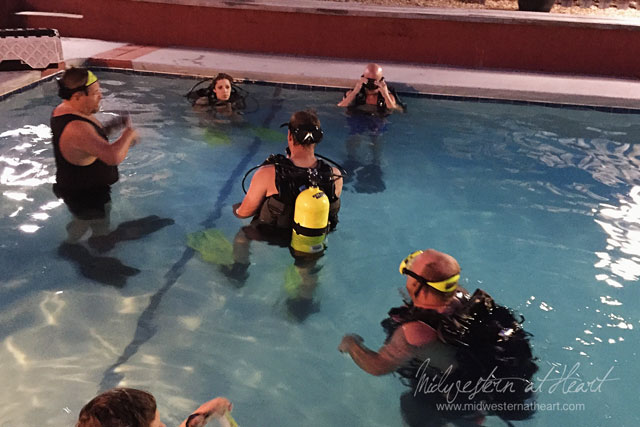 And that my friends is how you have a relaxed Labor Day! Hope yours was just as enjoyable, you know, minus the homework/studying for a test. By the way, can I brag on myself… I haven’t gotten to say this for a while…. I got an A on that test. BAM! I’m telling you, this is quite the accomplishment! Sadly I don’t always get to say I got an A on a test so I’m going to shout it from the rooftops at this point!