Okay… I guess I’ll share the story. It really isn’t much of a story but…. 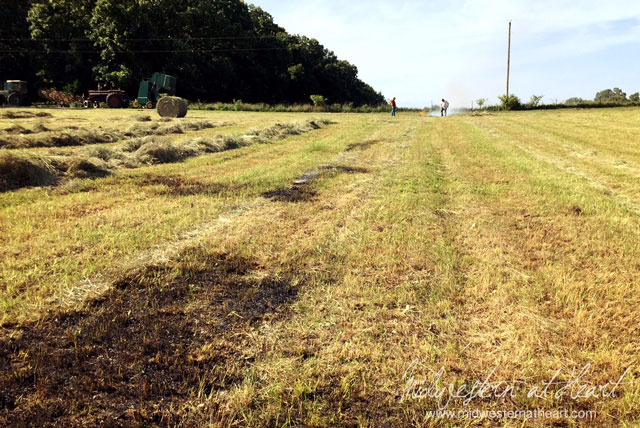 Sunday evening I had just gotten back from taking Tbug to her mom’s house. I left Abug sitting in her chair up by my house with my mom and went down to help dad with the tractor. Earlier I had been on the big tractor raking and just as I got done with the last row the tractor started acting funny so I shut it down. Turns out a line that runs hydraulic fluid broke and I drained the tractor of hydraulic fluid. #fail. But I shut it down the minute I realized something wasn’t completely right so I had that going for me.

So I was helping dad tear the line off to fix it and I start hearing a horrible metal clanging sound over in the field where hubby was on the other tractor baling. About that time I heard dad say shut it down you’re going to catch it on fire and then the fire broke out. Ugh! I ran to the edge of the field to see what was going on and then took off running (in flip flops, shame) toward the house to get a shovel. I wasn’t about to be able to put the fire out in flip flops.. this is why you farm in boots….

So then I took off across the field with a shovel and got to the fire first and started putting it out. There were three patches. I got one out and started on the second. As I got it out the first one started back up. By this time hubby got to the third patch I hadn’t even touched. Luckily the wind was blowing from the South so it was blowing away from our windrows that were still down. Had those puppies caught on fire our field would have been up in a ball of flames.

If you’re not on a farm, the reason would be because when you mow hay you have to let it dry first. If you bale it wet it will actually catch bales on fire because the molecules get so close together and sit there with friction and will catch a bale on fire. So you let your windrows dry before baling them, therefore if that fire would have sparked one of them it’d been anybody’s game.

So we got the 3 patches in the field put out, then we walked up the driveway to put out the one that was going into my yard toward the chip and seal driveway that was the least of our problems. My yard was recently mowed (as in that day) so it was very wet and then it would have hit the driveway which is chip and seal so it wouldn’t have anywhere else to go.

And that would be the story of the fire.