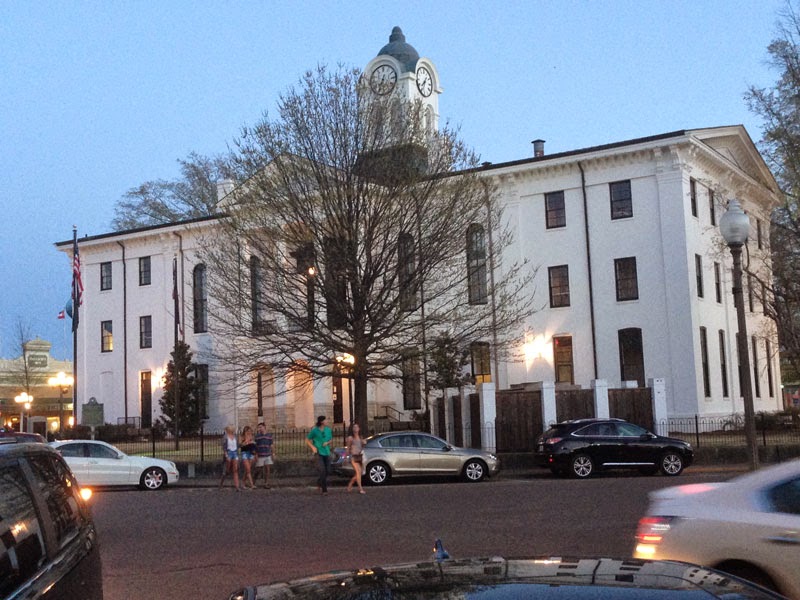 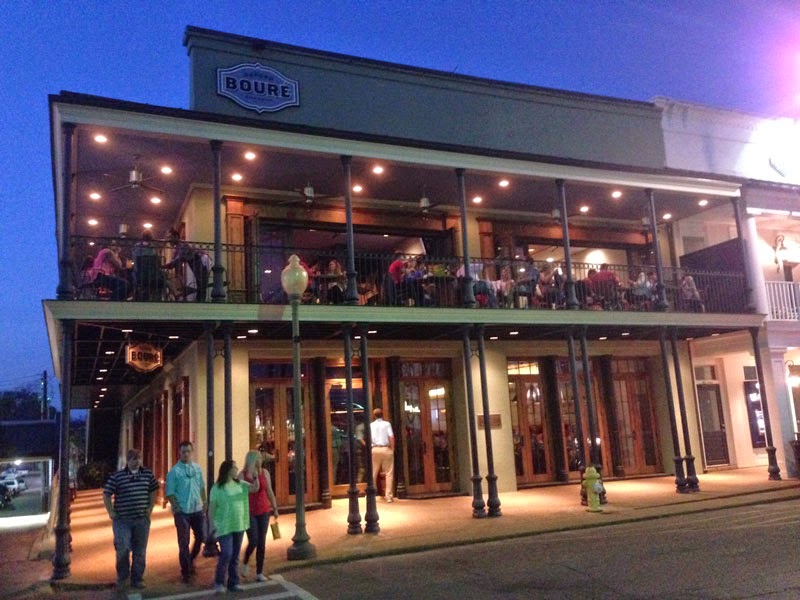 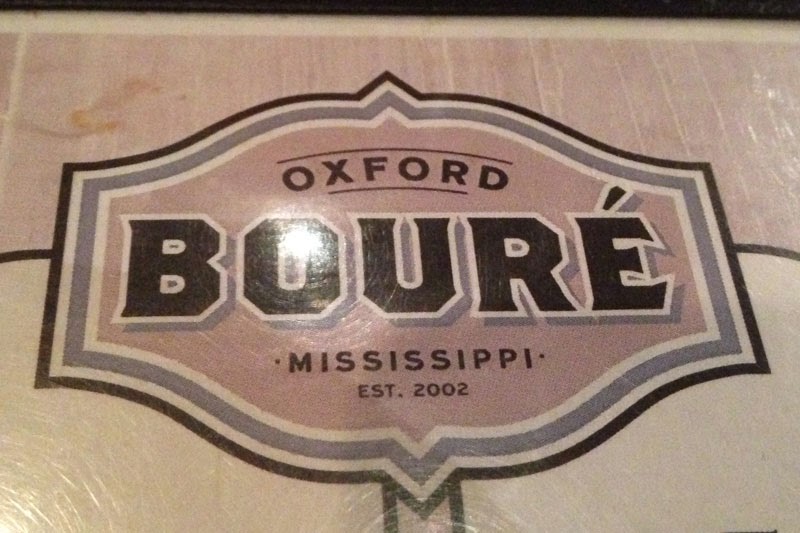 As I’ve mentioned once before, I was a bit leery of the Sweet Tea because everyone says it’s really sweet, but you know what, it was delicious! 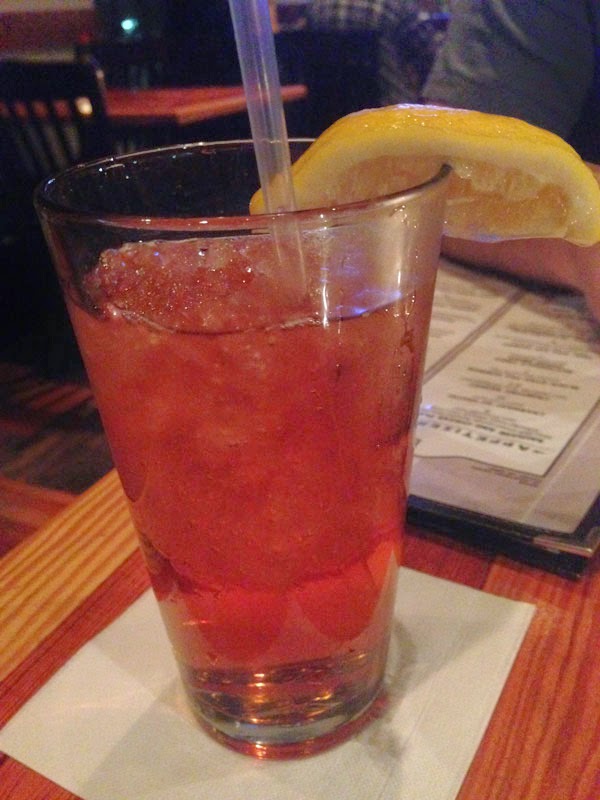 Now the guys in our group wanted to try Mint Juleps because that’s what Faulkner drank. Obviously in my state I can’t… lol, not that I’d want to at lunch anyway but whatever :). One of the gals got a Coors and look at the cute bottles they came in. I thought it was pretty cool that it was a commemorative of the 1936 bottle. I don’t drink beer so I’d have only seen this had someone ordered one around me so very cool they decided to drink at lunch :). 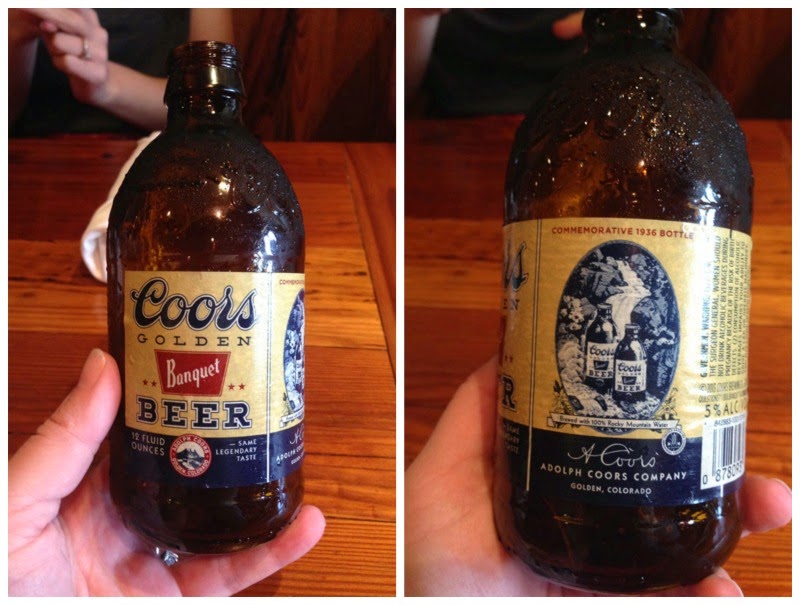 The first night we were there, we actually ate at Bouré and started with an appetizer. This was Roasted Jalapeño and Grilled Peach Chutney Dip. Oh holy yum! I’m serious, I say that a lot but there wasn’t any left by the time we went through it. Jalapeño cream cheese topped with grilled peach and bacon chutney served with pita chips. Heck I was sold on the Jalapeño cream cheese and bacon, I mean seriously :). The flavor was out of this world! 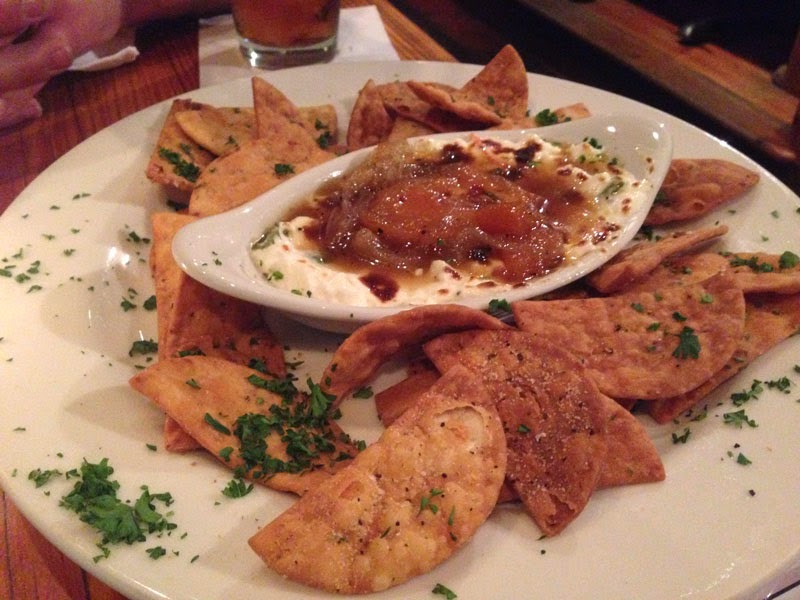 Then Thursday night and again on Friday a member of our group ordered the Peacemaker. This was a HUGE sandwich! It was Fried Louisiana Oysters, Shrimp, Crawfish, Fully Dressed, French Quarter Rémoulade, toasted French Loaf. This was with a side of Sweet Potato Fries. I’m not sure what the other side was from the lunch. I tried not to be tooo much of a pain taking pictures of food :). Both reviews I hears were YUM! 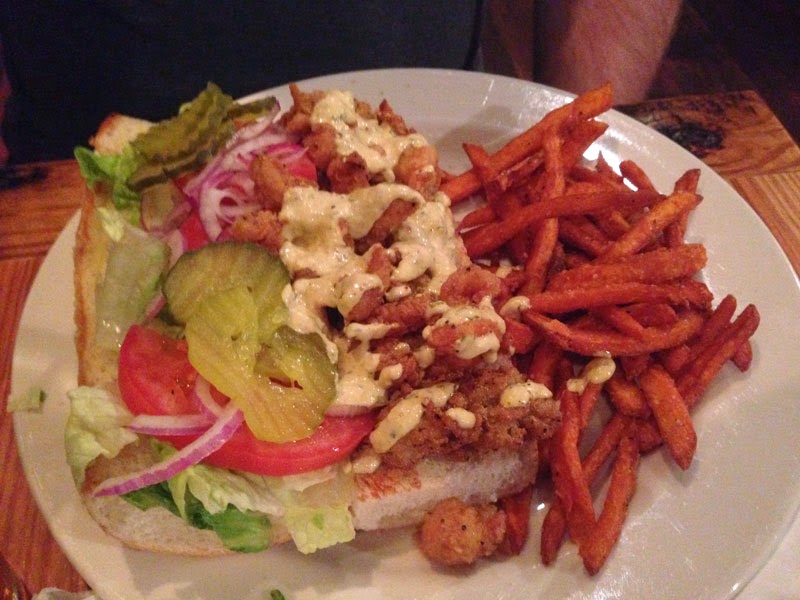 Thursday night I went with the Chicken & Mushroom Fettuccine. Grilled Chicken, Mushrooms, Bacon, Red Onion, Tomato & Spinach tossed in White Wine/Lemon Butter with Fresh Basil. I was a bit leery even though I ordered it because usually I prefer my Fettuccine to have a cream sauce, but holy Hades was this awesome. I didn’t miss the cream sauce one bit. I even liked the red onion which I usually think is too strong. It was just the perfect combination. In fact, I almost got this again on Friday for lunch but decided to take advantage of trying other food since I got to eat there twice. 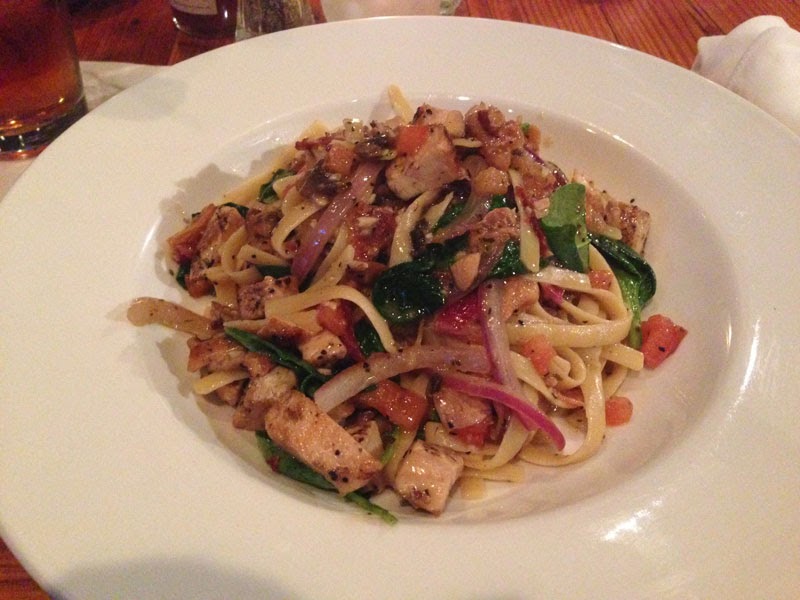 On Friday I ordered the Reuben. Shaved Corned Beef, Homemade Sauerkraut, Swiss Cheese, Russian Dressing on Rye. I’m not a huge Sweet Potato fry fan but I ate some the night before and they were so awesome that I had to get my own. The next day, they were just as good. Now normally I steer clear of Reuben’s because I’m not a huge fan of Swiss cheese but holy cow this was good. I ate every last bite of it… seriously. Don’t judge! 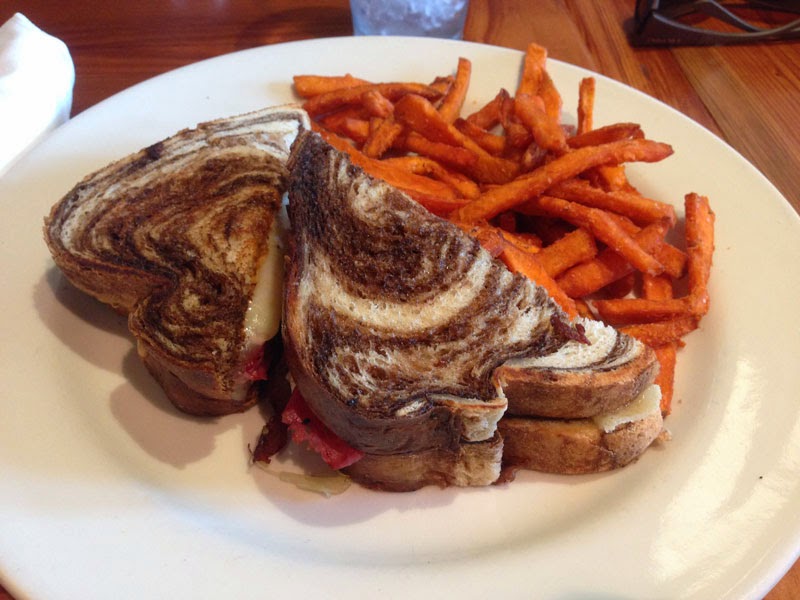 Again I was trying not to be a pain by taking pictures of the food so I pretty much stuck to mine and whoever was around me that didn’t get offended :).

This was the Rib-eye Sandwich. Slow Roasted Rib-eye Steak, Grilled Onions, Horseradish Cheddar, Rosemary Mayo, Arugula, & Tomato on French Loaf with a side of Pan Gravy. Oh and a side of the Sweet Potato Fries. Consensus was… YUM! 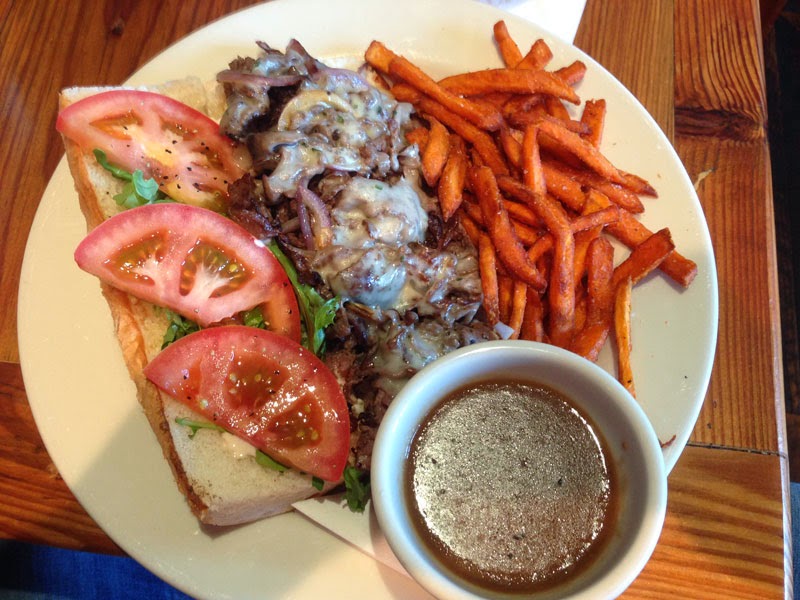 Now back home hubby and I got off on eating Rémoulade sauce with our French fries at a restaurant that is now out of business 🙁 but when I saw they had this, I soooooo asked for some just to dip my fries in. Let me tell you, totally worth it! 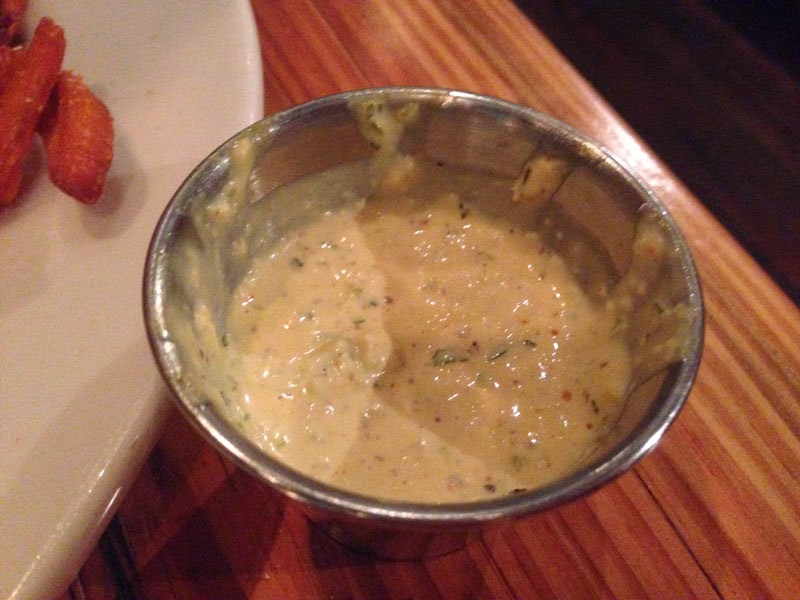 And the general all around consensus was, Eat Here! YUM! 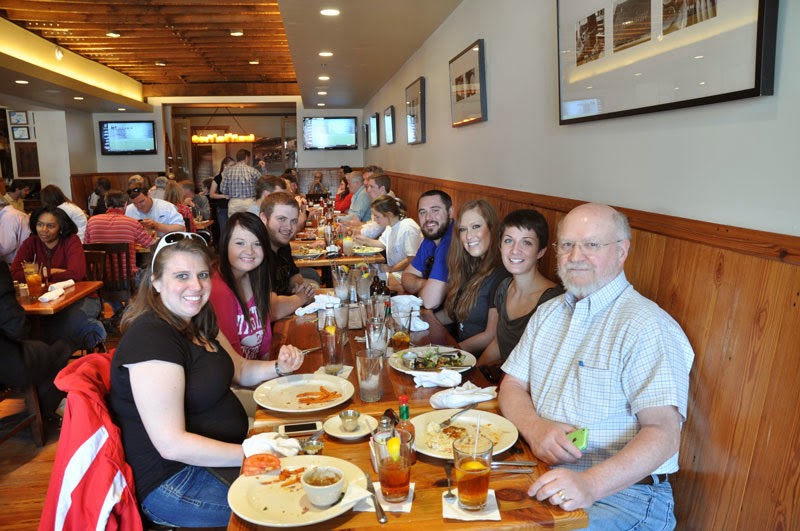