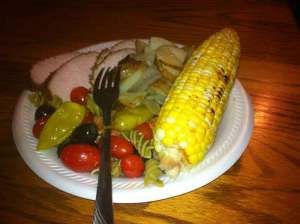 So Friday we mowed hay. 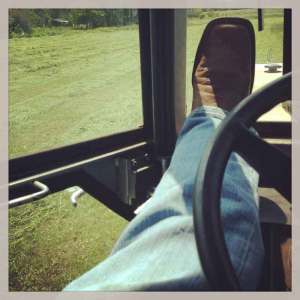 All good and well right?  Saturday morning it rained on it.  Oh well, I won’t complain about the rain… too much… lol.  The wind blew and blew on Saturday and Sunday.  By about 3 pm or so on Sunday we thought we might be able to bale hay.  What did that mean?  Possibly not making it to Sunday Night Dinner.

It just so happens that hubby loves loves loves to smoke meat though and had volunteered to smoke a Pork Tenderloin.  So we set the smoker to smokin, let Earl know we might not be there to bring the meat over, and headed to the hayfield.

Dad wasn’t able to bring the baler over on his pickup like originally thought so hubby headed to grandmas with the tractor.  Tbug and I figured it wouldn’t be all that long so we decided to stay around the hayfield and drive around picking up rocks and sticks so we hopefully wouldn’t break the baler.  She rode around in the trailer and I drove the 4-wheeler.

2 hours later, I killed the 4-wheeler and we were exhausted, hot, and tired.  Hubby finally showed back up and fixed the 4-wheeler, then we jumped on the tractor and went to raking hay.  Tbug even got her first lesson in driving the tractor.

We got the first field raked and dad got done with whatever he was p to.  He came out and they determined the field was still too damp to actually be baling so hubby, tbug and I loaded up and headed to Sunday Night Dinner.  I sent Earl a message that she got us as we came (hot, tired, and dirty).  She said perfect timing because they were just finishing up the food and to come on.  I asked her to get me photos so these next photos are courtesy of Earl :).

2 Types of Pork Tenderloin.  One is coated in a Parmesan Cheese mixture hubby did up out of his head.  The other was seasoned with Butt Rub.

B2.0 made this pasta salad that was delish! 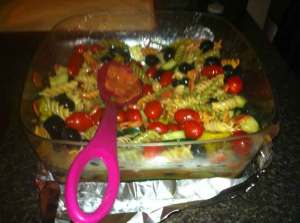 This was a potato and onion mixture that was done up and grilled on the BBQ grill. 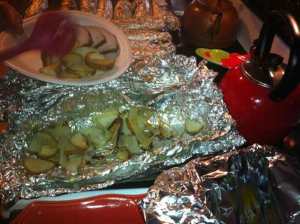 And there was Grilled corn.  Hello YUM!  Thank you Earl for the food photos! And thanks B2.0 for letting Earl take a photo of your food 🙂

I asked Tbug to get me a drink because I was sitting in the corner with people on both sides of me so it was more difficult to get out even though they’d have let me out.  One thing we do is write our names on our cups so we don’t get them mixed up.  Tbug cracked me up when she wrote my name on my cup.

Mamaw made this delicious dessert.  It was a strawberry trifle and oh my goodness we all thought we were in heaven. 🙂  There were also 2 different chocolate cakes and brownies plus ice cream.  Apparently I fell asleep on the job taking pictures.  You can kind of see the icing for the chocolate cake B2.0 made at the top right corner of this photo.

After dishes were washed and the kitchen was cleaned up, we all went and gathered outside.  Look at the kitty.  Apparently she wanted in the smoker?

The cat has a very high tolerance because this pooch was dragging her around by her ear for a while.  They finally retired to the fire pit before we started a fire.  It’s funny when one puppy falls asleep, they pretty much all do.

We brought lawn chairs out and gathered around the fire.  It felt nice even though it was a warmer day.  By the evening, it starts to cool off.  Mr. T. missed out because he crashed inside on the couch.

By the end of the night, I was exhausted but I was also tired of wearing shoes.  Dang if shoes could talk, I’ll bet they all have really good stories!

Tbug stayed Sunday night with us as well and she asked if Moo could stay the night, so Moo went in, gathered her clothes, and off to the house to crash we went.

And that, friends, was Sunday Night Dinner this week.

0 thoughts on “The Sunday Night Dinner we almost missed”