This last weekend there was a huge gathering of friends and family and we were invited.  Hubby wound up having prior engagements that took him most of Saturday.  Tbug and I got tired of waiting on him plus he’d entered his chili in the chili cookoff; so Tbug and I decided to go without him, take his chili and he could meet up with us later.

We really weren’t sure where we were going after we got on the main road we were told so I plugged the address into my iPhone’s maps for directions.  BIG mistake, Siri dumped us off in the middle of the woods.

So we turned around, back tracked and I called Earl.  She wasn’t answering so next I tried Pokey.  Turns out we missed the turn by about a mile.  Not bad, right?  Don’t worry, Tbug and I finally got there, just in time to get hubby’s chili there for the judging. 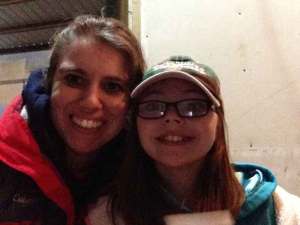 There were 4 judges judging 6 different chili’s. 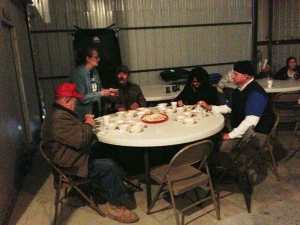 After the judging was over then everyone got to eat.  Of course you had your choice of 6 different chili’s, gumbo, nachos, tacos, taco salad, and lots of other goodies, plus dessert.  You can’t forget the dessert.

After everyone had a chance to eat dinner they announced the winners of the cookoff.  Earl had also entered her chili in the contest.  She needed a “support” group.  And as you can tell by this photo, she placed.

Congrats to Early and her 3rd place win.  Her secret ingredient, Cinnamon.  Hubby apparently was the only one to guess this.  I’m not a huge chili fan so shame on me, I didn’t try anyone’s, but I hear they were good. 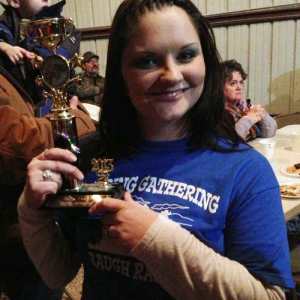 After the announcement of the Chili Cookoff Winners, then they had an adult round of Hula Hooping.  Wow, most of us haven’t done that since we were kiddos, and a bunch of the guys were signed up.  I’ll let you observe how this all went.  And I’m going to point out, there was no alcohol involved at all.
[youtube https://www.youtube.com/watch?v=vUKRUQAMZ_Q]

After we finally had a winner for the adults, then they had a Hula Off between the adult winner and the Kid winner.
[youtube https://www.youtube.com/watch?v=Un4GN2t9ttI]

Even though Saturday was a cold and rainy day, it was a blast and everyone had fun.  It was a great day to get together, have great food, great conversation and lots of fun!

0 thoughts on “Gettin Down MO Style”