Once Thanksgiving hits our days spiral fast toward the end of the year between parties and trips and work in general.  Yesterday, hubby and I had a free moment, a breather if you will and we decided to spend the entire day together doing nothing.  Well seeing what sales were like after Christmas but pretty much, doing nothing and just spending time together.

We are probably two of the most indecisive people you will ever meet, especially when it comes to going out to eat or even what to eat at home.  Neither of us usually care and we can always find something to eat just about anywhere.

We were driving down 7th Street in Joplin throwing out all the different restaurants we could eat at when I suggested Garfield’s. We realized right then that in the 3 1/2 years we’ve been together, we’ve never eaten at Garfield’s together; it was settled. 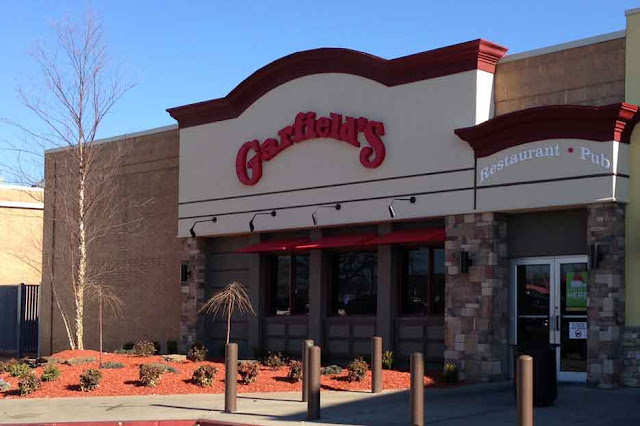 As a little kid, I used to love to eat at Garfield’s.  So much so that it was usually my restaurant of choice for birthdays. 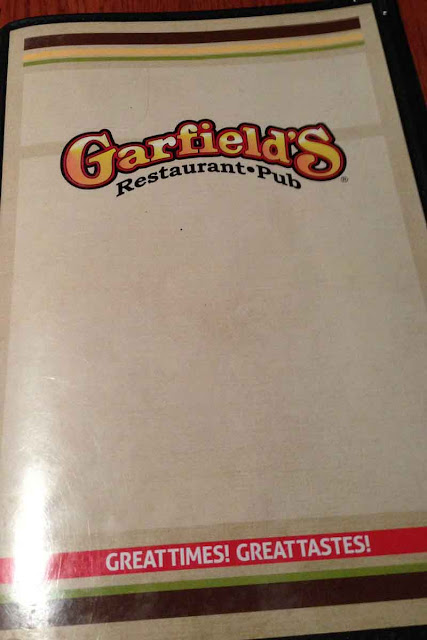 Oh as always I look at the dessert menu’s and just about drool, joke that I could eat dessert for my meal, but in reality I’m a savory person and too much sweet does me in, but my oh my doesn’t that look fabulous! 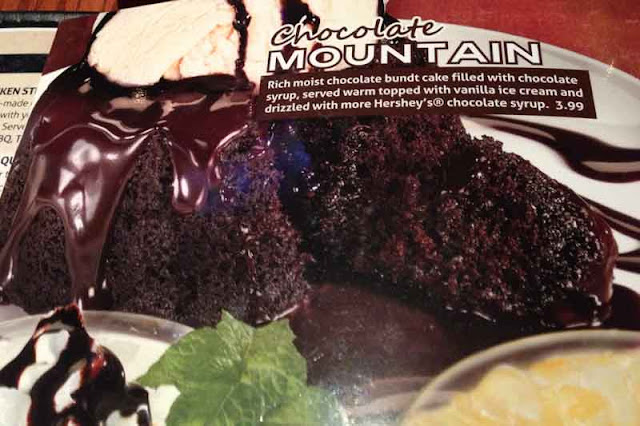 For the most part hubby and I have given up drinking pop (or soda or soda pop or Coke, whatever you’d like to call it), so other than water, our treat is Sweet Tea.  I must say, they had some mighty fine sweet tea! 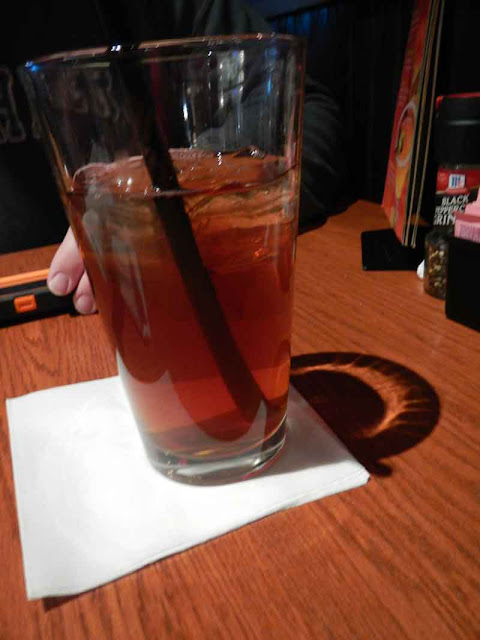 Now I did the Lunch combo where I got to choose from two options.  My first choice, a Caesar Salad.  Oh yum!  The right amount of dressing to lettuce ratio and the croutons were great.  I claim to be a crouton connoisseur because, well, when I was younger my idea of a salad was croutons, ranch dressing and cheese :).  I’ve grown up a bit since then and like my lettuce in there too! 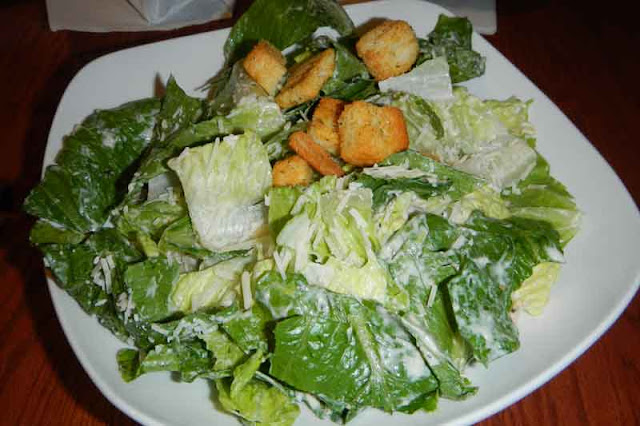 For Christmas I got a new point and shoot camera and so I was playing around at the table with it.  I might have even been making the server nervous. ha! 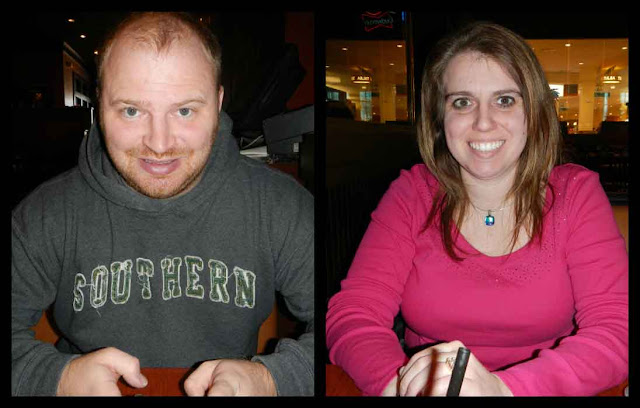 The other portion of my meal was Penne Pasta with Grilled Chicken in a Garlic Butter Herb Sauce.

Penne Pasta with Chicken
A grilled, seasoned, Chicken breast served over a bed of penne pasta with your choice of marinara sauce, creamy Alfredo sauce or garlic butter herb sauce.

My first thought was to go for the Alfredo, but something about that Garlic Butter Herb Sauce just kept calling my name.  I think Pioneer Woman and Paula Deen would have approved!  I’m so glad I chose that too.  Other than I could ward off the vampires all afternoon (you know, garlic, vampires… anyway moving on), It was absolutely divine. 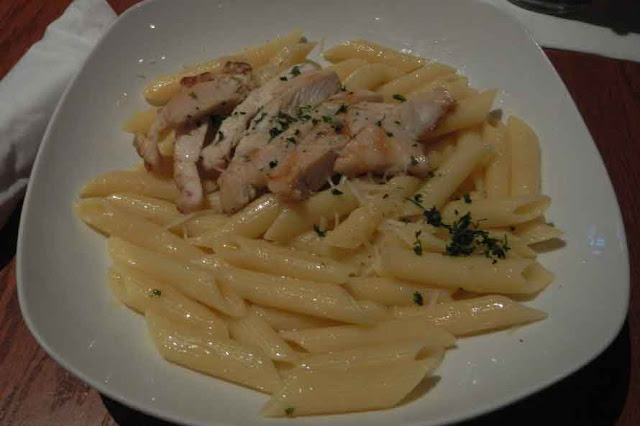 Hubby went with the 6oz Sirloin.  It came with a choice of two sides.

Hmmmm I don’t remember the garlic toast, but the steak was cooked just right.  He (and I) goes with Medium Rare.  His two sides were Tater tots and loaded mashed potatoes. 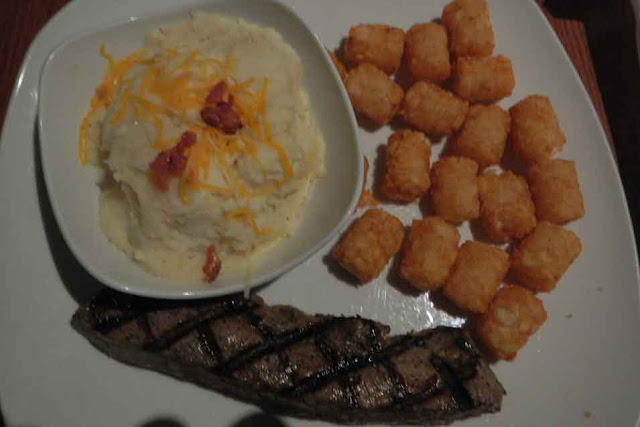 He cracks me up more often than not when he gets tater tots because he individually ketchup’s them. (please ignore my nasty nail polish!) 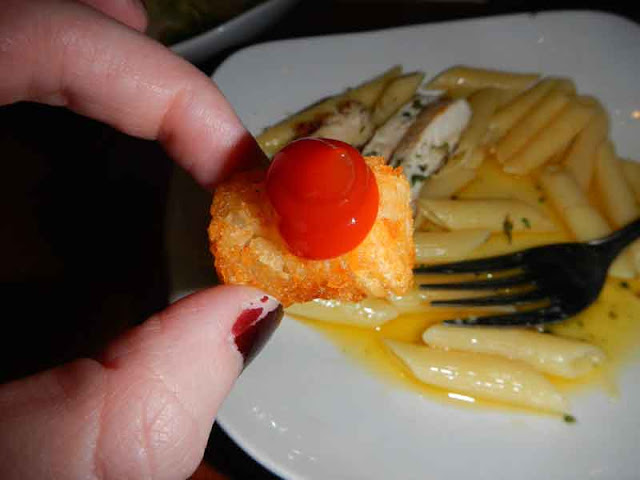 And if this picture doesn’t tell you what I thought of the pasta, I’m not sure anything will! 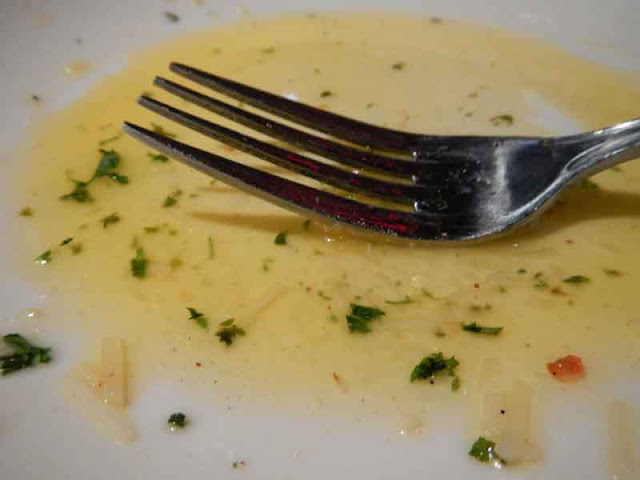