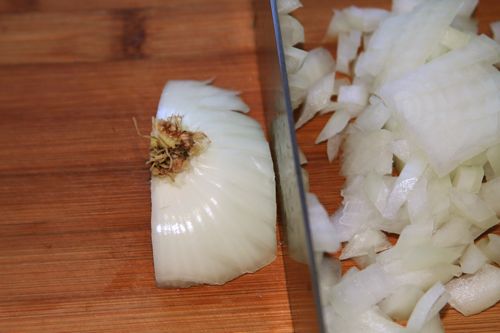 So anytime hubby is in the kitchen cooking and needs an onion, he generally asks me if I can come cut them for him.  I’m not sure if it is my contacts or what, but I don’t generally cry when chopping onions.  Oddly enough, I think it’s fun!  Back in 2010 I ran across a post-Stef did about chopping onions and not crying so I thought I’d have her share this wonderful tip again.  So Stef, take it away!

If you took a look at my In The Kitchen posts, you likely figured out that I’m not a professional cook.  Nor have I had any classes (I do have one scheduled for later this month).  In 1983 I had my first apartment and bought my first cookbook (Betty Crocker).  Then in 1984, I bought (The Joy of Cooking).  Since then I have accumulated a ton of cookbooks over the years.  I am addicted to cookbooks!  As you may have noticed from the recipes I’ve posted, I also have recipe software MacGourmet Delux.

Admittedly, I haven’t looked at all my cookbooks in any great detail.  A few years ago Hubby bought me an updated version of The Joy of Cooking.  The following Thanksgiving Mum (Hubby’s mom) and I sat down compared the two editions page-by-page.  As I was flipping through the pages and I had an Oops! moment…  I realized something embarrassing and sat there and laughed at myself.  It’s that embarrassment I want to share with you… (brave aren’t I?)…

I used to hate cutting onions.  I used to cry soooo much I couldn’t see!

For the last few years, I have cut onions with no tears.  The Offspring and I used to watch The F Word on BBC America.  Don’t worry, “F” is for “Food”!  It is a Gordon Ramsay show – yeah, shocking that the “F word” is for “food”, given he is usually bleeped on his shows for dropping the “F-bomb”…

But I’m not here to talk about Ramsay’s bad language… In each show, Ramsay would have a section devoted to helping people get back into the kitchen instead of eating fast food.  He had a segment where he helped a woman learn how to cut an onion.  Intrigued, I went to the show’s website and found a video.

OMGosh!  I couldn’t believe how simple it was… I felt sooooo dumb!!! Especially since if I had only looked in any detail at my 1984 copy of The Joy of Cooking I would have known how to do it!  UGH!!  I was dumbfounded!  For almost 30 years I cried every time I cut an onion.  And I hadn’t yet seen Julie & Julia and seen that Julia Child had learned how to do it and it’s in her first book (which I didn’t own until after the movie).

In the meantime, if you don’t know how to cut an onion without tears… let me show you.

Before we begin, sharpen your knife.  It is very important to always start with a sharp knife.

Take an onion and cut off the top – do not peel it.

Lay the onion on the flat part and cut it in half through the root.

For each half, peel the skin off. If you need, take off the next layer, too. Also, remove any excess root strings.

Then lay one half on the largest flat part and start cutting in strips – DO NOT cut too close to the root (see where my knife is in relation to the root). It’s the root that causes the tears.

After slicing across the onion, turn it and then make a couple of slices horizontally – be careful not to cut yourself.

Then start to cut from the side. Again, DO NOT cut too close to the root.

When you get close to the root, turn the onion onto the flat side and cut more.

When you’re done, all you will have is the root part – and NO tears!   Toss the root in your compost pail and start the other half.

Have you ever used this method before?  If so, where’d you learn it?  If not, do you have a method that keeps you from crying?  if not, go try and come back and share your experience.

Lesson: Don’t be like me… if you buy a cookbook that has more than recipes (like The Joy of Cooking)… flip through the pages… you may be surprised what you find.

Have you ever had an Ooooops moment when looking through a cookbook?