Let me state for the record, I am not now nor have I ever been a morning person! Whew I feel so much better now that I got that off my chest and I can be completely honest with you! I mean I’m not the lying type so It feels so good that we are friends and I can tell you anything! Remember friends don’t judge ;).

So I took the Friday before the wedding off. I figured I had enough to do that day and I have vacation I have to use before Oct 9th or else I’ll lose it so why not take the day before off, right? We made appointments for April and me to get pedicures (Evelyn had recently had one with her momma but she still came. How else would I get pictures, haha, truthfully the pictures were her idea :)) and I had fake nails put on. After my Saturday night bowling excursion and about ripping my thumb nail off, my finger nails looked horrible! And oddly enough, nails show up in pictures, especially the pretty french tips :)!!!

I was wide awake at 6 that Friday morning and couldn’t go back to sleep. I got up and went out and fed the horses and sheep and llama. I left the cows and buffalo for my dad, they are just down right mean! Then I went back in the house and jumped on and read a few blogs before I had to start getting ready.

Once my parents woke up I got grumbled at by my mom for “not helping” with my wedding, when every time I tried to help I got told, “No!”…. sigh! Anyway I proceeded on with my day. I figured she was just stressed out. It bummed me out at first but I got over it.

As I was headed to town for the nails, it dawned on me I’d be driving right by Evelyn’s house so I called her and said if she was ready to go I’d just swing by and pick her up then she and I headed for the salon.

Remember I’m not a morning person…
don’t talk to me until I speak first
I’m ready to usually speak around 10am.
This was 9am… haha

April was a few minutes behind us but she caught up 🙂 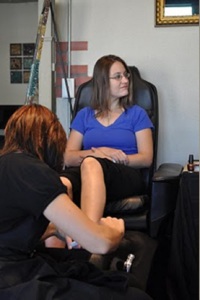 That felt so good! I could have gone to sleep in that chair but both girls kept talking to me. They couldn’t believe I was a Bride to be because I was so calm and not freaking out. They wondered if it was the calm before the storm… 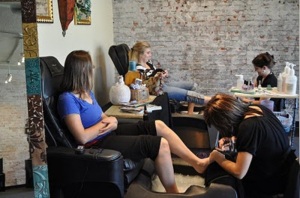 I smile on command 🙂
I was playing with my ankle bracelet. 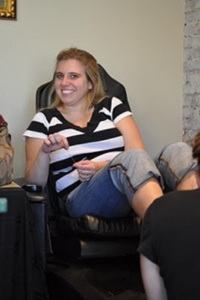 Hmmm… wonder if April thinks I talk a lot?
I was just answering questions! 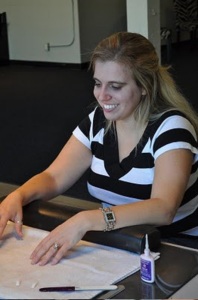 She did silk wraps so I could take them off and they’d do the least damage.

April and Evelyn waited on me so patiently! 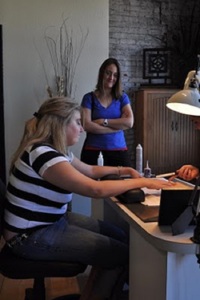 Then the lady begged me to let her shape my eye brows!
Heck yeah I let her. I’d been trying to get them done for a while and hadn’t succeeded. 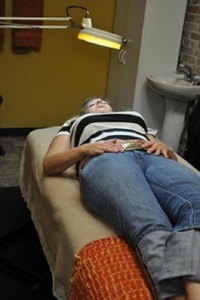 The left one was done. The right one still needed help. They got a before and after shot this way 🙂

First time I got my eye brows waxed I screamed Bloody murder! Now I’m halfway used to it. 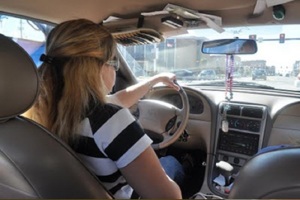 After we left the salon we had to run to the florist and check out the bouquets. Now silly me, I drive a Mustang. My trunk was loaded down with our honeymoon luggage and I forgot once we got to the florist I was to pick up 2 large vases for decoration at the reception and I had April and Evelyn riding with me. So we wrapped one in a blanket in the trunk in front of the suitcases and wrapped the other in a blanket in the backseat and it halfway sat on Evelyn’s lap.

Then we headed to lunch at McAlisters. While we were there I gave the girls part of their presents. They received the teal bathrobes that I had ordered a while back. I had them embroidered with their initials in brown. I think they loved them :)… they said they did anyway… LOL.

Evelyn gave me a sheep with a teal and brown garter wrapped around its neck. She also made one for herself and one for April that way we could all wear matching garters under our dresses :).

After we left McAlisters, we headed for Chick-Fil-A where I was to pick up 10 gallons of their lemonade. That’s what we used as our punch for the wedding. Evelyn is a manager there (nope I didn’t get a discount… haha) and so she went back and helped them make up the jugs while April and I sat at the table and watched them lug them out to us.

Once we got the 10 gallons of lemonade one of the workers helped us and we all headed for my car. Now remember me telling you about what I drove (hint: Mustang) and that we already had 2 suitcases and 2 huge glass vases plus 2 extra people… now we were going to add 10-1 gallon jugs of lemonade in there. Oy I didn’t think that out very well at all did I? I should have stolen PC’s truck. But we managed.

After we left there I took Evelyn to her house, April to her car and headed to the Phelps House to unload the glass vases and lemonade.