If you’ve never ridden in a vehicle with me, I’d highly advise that you not… Why you ask? It’s not because I’m a terrible driver… anyway I don’t think I am… No it’s because somewhere along the way I pissed off the traffic light gods and so I pretty well hit every stoplight on my way ANYWHERE.

Some days I catch a break but typically I’m stuck at every red light from my starting point to my destination. It’s kind of become a very comical thing.

On my way to and from school I go through 5 stoplights. 9 times out of 10 I’ll hit all 5 lights on red both directions. It’s that bad.

One night I was taking Tbug home to her mom’s and we were running a bit late. I told her to start praying to the light gods that they be nice to me.

Now one time I told her about the “light gods” and she informed me that there is only one God and I told her yes I know this but somewhere I’ve upset someone because I hit every red light. Then I proceeded to hit every red light that particular night. Now the night I told her to start telling the light gods to be nice, I hit 1 out of 10. See that was my off night. We were already running late so luckily I only hit that one. whew. Then I had to go meet hubby and I hit everyone on my way to meet him. I just started laughing.

So whatever I did, it’s just become a comical thing between me and everyone and no one wants me to drive or to ride with them. I can be asleep in the backseat and we’ll hit every red light. I’m not sure what I did.

The other day… we were driving and what do you know, the light turned red. I started giggling and then something caught my attention on the road. We were the first ones to pull up to the stop and there was a screw driver on the ground. The vehicle beside me pulled up so I knew I wouldn’t get run over, then I jumped out and grabbed the screw driver. 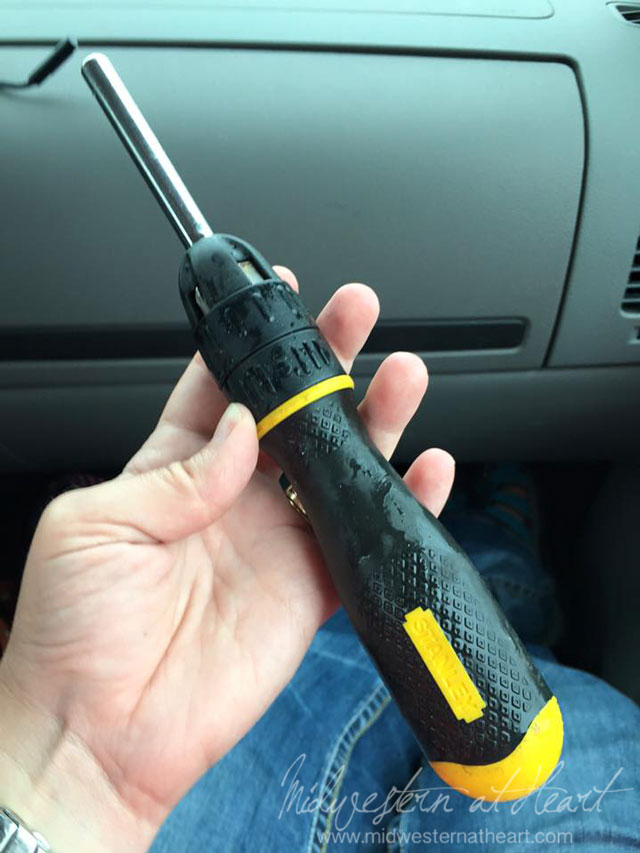 And that is how the “light gods” found me a screw driver. Had we not been stuck at the red light, I wouldn’t have ventured out to get it. And I’m sure the guy next to me thought I was nuts.

I should mention I knew I had enough time to get out and get it, especially because it was right below my door.

(haha play on words, it’s an alcoholic drink but I have absolutely NO idea what is in it. I’ve never had one nor have I seen one made….)