There are pictures of multiple crowds of women being battered to keep them at bay, etc. Here again, I wasn’t around in the 20’s either. Not my 20’s but the 1920’s just to be clear :).

But… back to my professor saying he was a feminist. This was in my memoir class I took. He made a comment that he was a feminist. I wound up in his office a couple times throughout the semester working on different papers and one day I kind of called him out on the whole feminism thing. I kind of told him he was crazy and I wasn’t even a feminist. I stopped him in his tracks. He asked me why I said that. I pointed out that I wasn’t going to be burning my bra anytime soon, trying to get a laugh out of him. And then we had a more serious conversation.

I asked him why he called himself that, especially because he was a male. He told me he was all for women’s rights. And of course, I questioned him some more. He then pointed out that I am a feminist even if I don’t claim it. Okay… explain… He said You have a degree in agriculture, right? Yes. He said, well if women before you hadn’t stood up for women of all sorts, then you wouldn’t have a degree in agriculture. That is enough to make me question him some more.

I guess partially I question that because while I didn’t know my great-grandmother personally (she died in the 70’s in her 90’s) I’ve heard stories. We noticed on her tombstone that she was born in the 1880’s. My grandpa was born in 1928. When he was 6 years old my great grandma and great grandpa adopted him (they were in their 40’s or 50’s). They bought the farm my grandma currently lives on. My great grandma ran the farm and my great grandpa owned a Maytag dealership in town. But all the farming was done by my great grandmother. I’ve heard my great-grandfather had nothing to do with the farm other than feeding the 50million (exaggeration) cats he had. Supposedly he could walk out the door, rattle a cat food bag and cats would come running from EVERYWHERE.

I never heard my great-grandmother was a feminist though, she just wanted a farm, so she bought one, set it up, and ran it. So my professor telling me that me having a degree in agriculture caused me to be a feminist still makes me scratch my head. With any movement, there are always extremists. Unfortunately, the ones that come to my mind right now are the ones who are dressing up like vaginas. I’m sorry, but I’m not sure how anyone can take a person seriously dressed like that. I get women power. But I still question/shake my head about that one.

So there has been a lot of rambling. Truthfully I might even ruffle some feathers and that’s not my intention. I’m just trying to go through and analyze everything. I am an analyzer. I like to see things from all points. I don’t like when people chew me out because I’m looking at all stances… but I do like people to discuss (rationally!) things with me. So help me decide how I truly feel about some of this.

A friend of mine posted this on Facebook the other day and I feel like sharing it. 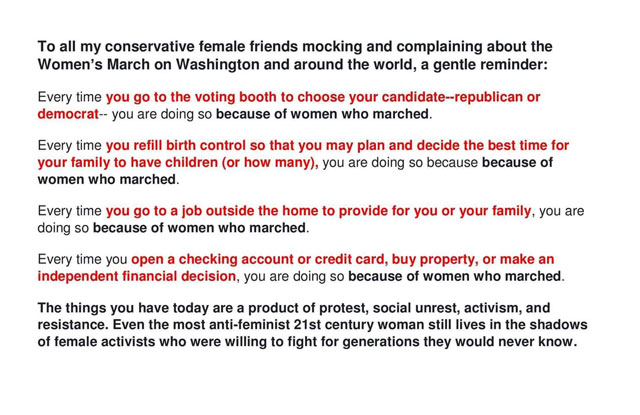 Now, based on things I’ve seen by the gal who posted this… she’s conservative. But she too has a job that mostly men do. She is a cutting horse trainer. I have to admit, it does seem weird to me that a woman couldn’t do that, but I do know times have changed. They have changed for the better and they have changed because women stood up for their rights. So I get it. I do prefer to do things like that with style and grace.

I don’t like that word vagina (it’s a weird word along with creamy and moist) and you’d NEVER see me dressed up like that. Maybe I’m too shy… but I’m not sure how you can be taken seriously dressed like that. Again, that statement isn’t meant to upset anyone… it’s just a thought I have. We all have thoughts. Sometimes people get badgered for their thoughts. I hope I don’t. Anyway at that maybe I should shut up like yesterday! I don’t know. I may take some heat off this post.

One thought on “Thoughts…”