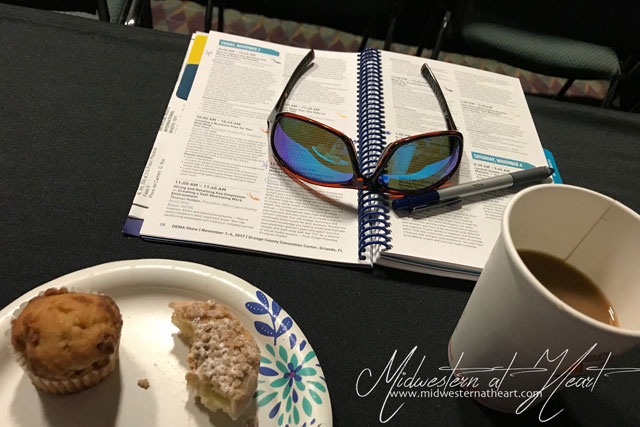 Hey guys! I just got back from an incredible week in Orlando Florida. Why was I there? Well, for a big SCUBA diving convention called DEMA. Wow, this place was extremely overwhelming. We flew out Monday morning from Kansas City Monday. It was a direct flight from Kansas City to Orlando. Getting a rental car in Orlando is extremely easy! Almost as easy as when we got it in Las Vegas a few years ago.

That night we were just there for fun. Deb and Grady had a SCUBAPRO Platinum meeting to go to on Tuesday, so hubby and I just bummed around Orlando. Wednesday through Friday we attended DEMA, classes, and ate excellent food. Wow, the food!

More than once I felt like I was going to cry. I don’t know why… I guess I felt like a failure. I learned a lot. I can’t believe what all I learned and some of what I learned I already kind of knew, but it just solidified my knowledge. Some things made me think, like the class I sat in on about the millennial generation. Holy CRAP!

Even through all the learning, I had a lot of fun, because well I’m a nerd and like to learn. But more so… we had our little Scuba Shop Elf Scuby with us and he played some pranks on his own. Santa sent him down to DEMA with us to check out all the new SCUBA gear for his wishlist. I added a few things to my Christmas Wishlist too. Yes, yes, yes, I know, it’s Thanksgiving month, not Christmas month… I’m going to tell you though… if you start shopping for Christmas earlier, you don’t have a huge hit right in December on the ol’ budget. It just makes sense.

So I’ll go more in depth later this week about our trip to Orlando, but I just want to say… It was a lot of fun. I learned a lot. I got a sense of where I’m going back. And so much more. Now if I can just figure out how to put it all in motion… I’ll be good to go. Wish me luck!

And by the way, if you really want to mess with your system… go a time zone ahead the week that before you switch back to Standard time. Come home the day it changes that night. Being on it for a week get’s you acclimated to it. Then you gain 2 hours and are wide awake at 5am. Hey it’s all good. I don’t complain, I just think it’s funny. I get tired of people who complain about Daylight Savings Time versus Standard Time. By the way, we’re back on Standard Time for those who get the 2 confused. Another rant for another day.

I like to move it move it
We Thank You!
El Dorado - Raymore, MO
We had to Buy a New Bull