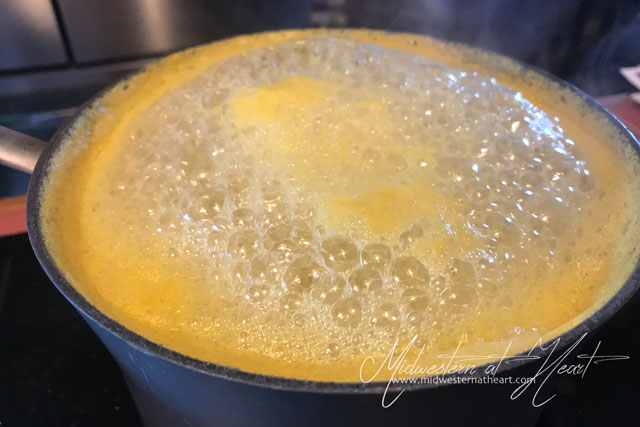 Were you afraid I forgot to make the July cupcake from the challenge? Never fear, here is the Piña Colada Cupcake. I really think this was one of the cupcakes everyone was looking forward too, that and last months. February’s was good too. I think May’s was the worst IMO. I have a feeling May’s will always be the worst IMO… So the way to start this cupcake was to boil my Pineapple juice. Can I tell you a secret? I had to boil it twice and I forgot about it both times. Whoops.

The first time I forgot to shake my juice together. So it really didn’t boil down to a thick syrup, which made me decide to start again. The second time I walked away and forgot again that I put it on to boil. Nothing happened either time except I came back to the above picture. No big deal. 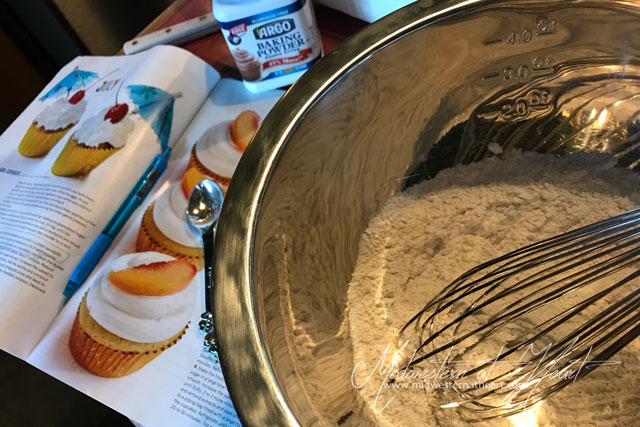 The boiled juice was actually for the icing but I wanted to make sure I didn’t forget because it needed to be completely cool before I could use it. A few hours later I started back in on the cupcakes. This time I mixed the dry ingredients together in a bowl. It says medium bowl but seriously, I could have used a small bowl for the dry ingredients. 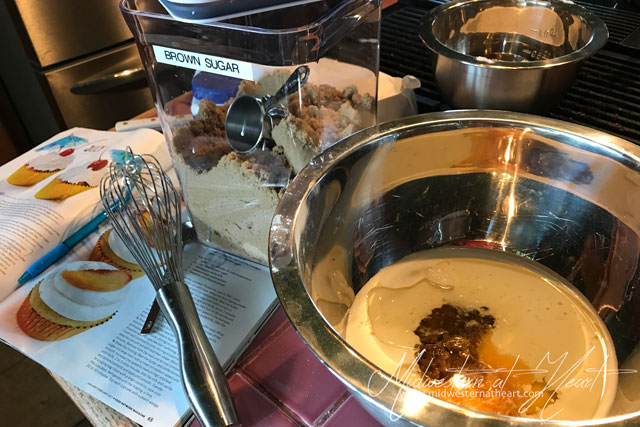 I moved my dry ingredients to a smaller bowl and used that medium bowl to mix my wet ingredients. You guys, I did all of this with a whisk. No big mixer bowl necessary. It was kind of weird and cool at the same time. 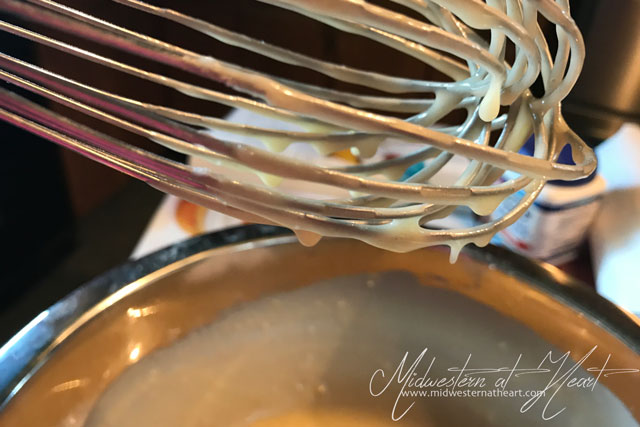 One challenge I made to myself, you know… other than this whole do all the cupcakes challenge, was to learn how to get all the measurements the same so I could have uniform cupcakes… 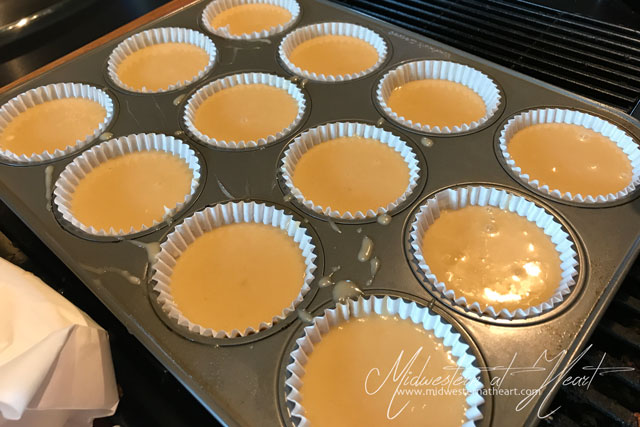 Look… what do you think? Am I getting the hang of this? I kind of feel like I am. One suggestion they make is to use an ice cream scoop. A little confession secret… I’ve used the ice cream scoop since I learned that years ago and STILL couldn’t get uniform cupcakes. Seriously, what am I missing? Anyway… I tried again… try number 345,098,376 is the charm? 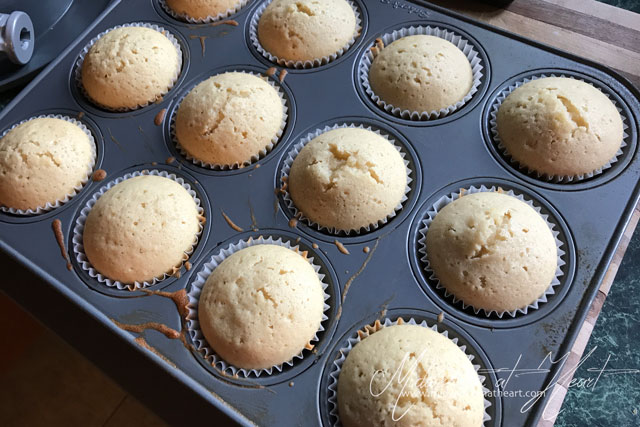 So I wasn’t totally paying attention to the recipe and forgot to poke my muffins the minute they came out of the oven and put the glaze on them. They sat there for 5-10 minutes while I was working on dinner. I guess that’s what happens when you try to multitask? 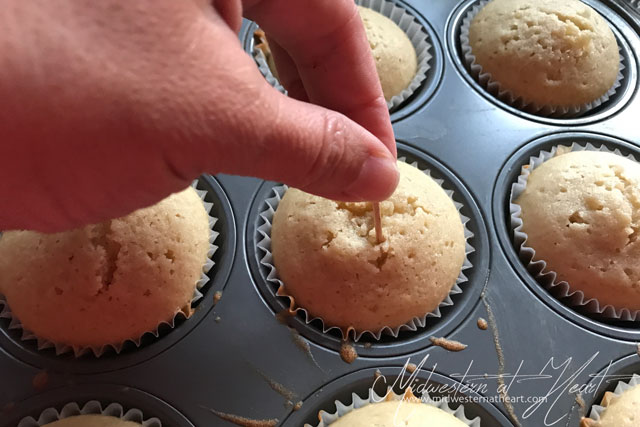 Then it was time for dinner. Hey, sometimes dinner takes higher priority. The icing, it needs to be made in a mixer. No big deal, right? Right! There wasn’t any need for a piping bag or anything to put the icing on… I just used my offset spatula. It worked great. Now this icing recipe made way more icing that needed, unlike the icing recipe for the February cupcakes. And this icing… Oh yum! 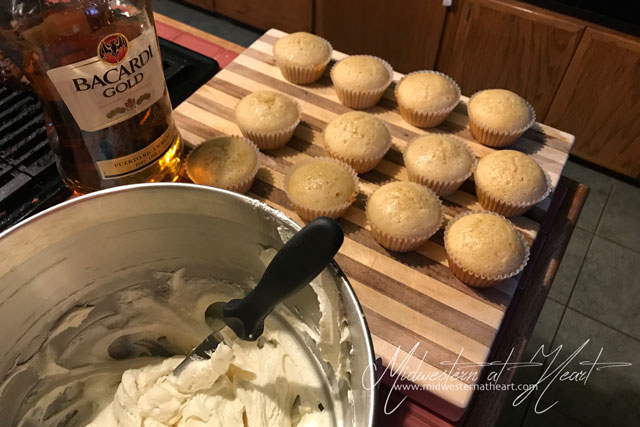 The instructions said to garnish with Maraschino Cherries and a little drink umbrella. I didn’t realize I didn’t have those until I already had the cupcakes made and truthfully, no one missed those. These cupcakes are the best by far out of this challenge. No JOKE 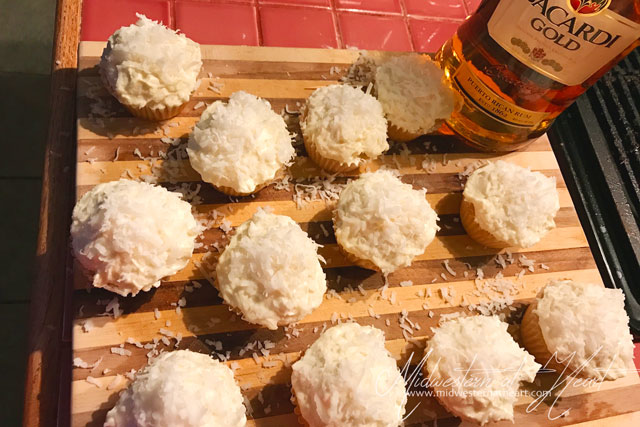 Make the cupcakes: Preheat the oven to 350 degrees F. Line a 12-cup muffin pan with liners. Whisk the flour, baking powder and salt in a medium bowl. Whisk the eggs, 3/4 cup granulated sugar, the brown sugar, coconut milk, vegetable oil and vanilla and coconut extracts in a large bowl. Add the flour mixture and whisk until smooth.

Divide the batter among the prepared muffin cups, filling each about three-quarters of the way. Bake until the tops of the cupcakes are golden and spring back when gently pressed, 18 to 20 minutes.

Meanwhile, combine the rum, lime juice and the remaining 1 tablespoon granulated sugar in a small saucepan over medium heat. Bring to a simmer and cook, stirring, until the sugar dissolves. When the cupcakes are done, poke them all over with a toothpick and brush with the rum syrup while still warm. Let cool 5 minutes in the pan, then transfer to a rack to cool completely.

Meanwhile, make the frosting: Bring the pineapple juice to a boil in a small saucepan. Reduce the heat to a simmer and cook until syrupy and reduced to 2 to 3 tablespoons, 6 to 8 minutes. Transfer to a small bowl and refrigerate until completely cool. Beat the butter in a large bowl with a mixer on medium-high speed until creamy, about 1 minute. Reduce the mixer speed to low and beat in the confectioners’ sugar and salt. Increase the speed to medium high and beat until light and fluffy, about 3 minutes. Add the vanilla and coconut extracts and beat 1 minute, then add the rum and the reduced pineapple juice and beat to combine. Spread the frosting on the cupcakes and top with the shredded coconut. Decorate with maraschino cherries and cocktail umbrellas.