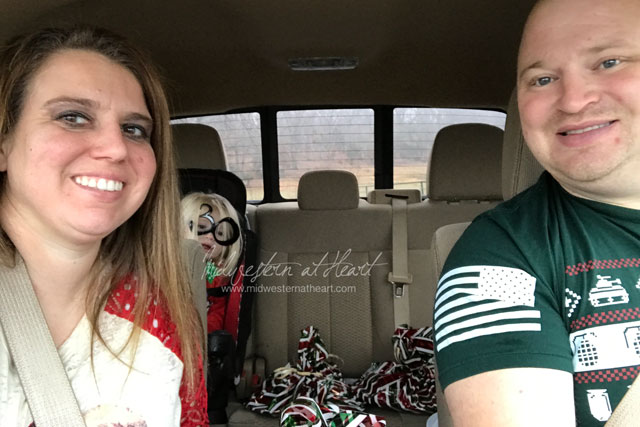 Grady actually had heart surgery earlier in the week. In fact, he was released to go home Friday afternoon, just in time for the holidays. We had to pick Tbug up around 11:30 so we stayed and chatted with Deb, Grady, and Karen until we had to leave to go pick Tbug up. They told Grady at the hospital (I think it was the hospital) that the bear would become his best friend. He laughed and said, that is so true. 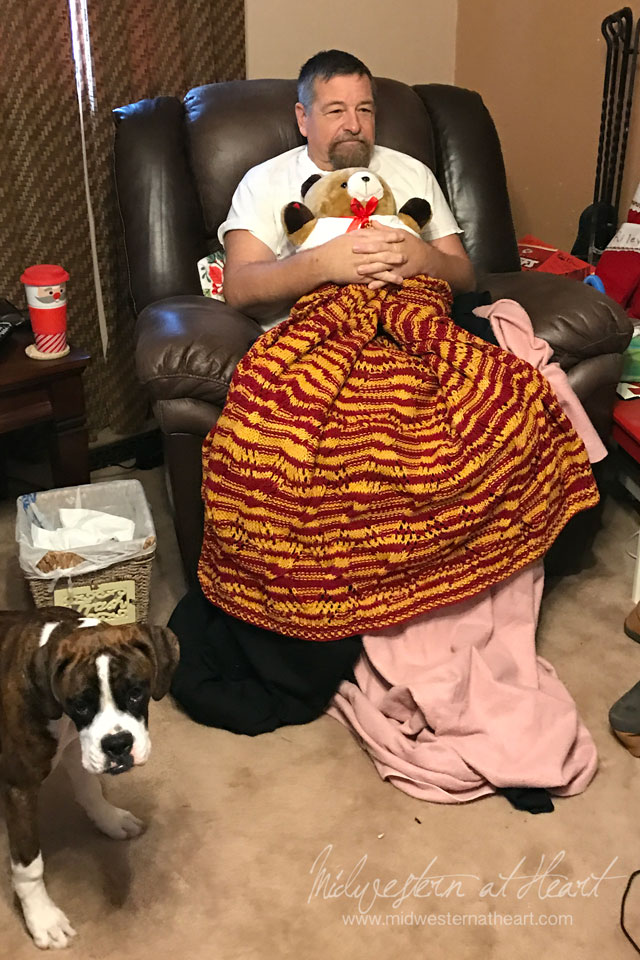 Once we got Tbug, we headed off to town to hubby’s cousin’s house for his side of the family’s Christmas. So earlier this week, his cousin/aunt lost their step-dad/significant other to Congestive Heart Failure. Poor Aunt Cheryl wasn’t in real good spirits if you can only imagine. After we ate lunch, she went in and started doing the dishes. That’s one thing she ALWAYS does… dishes. Ambyr sent her out of the kitchen so she came in and sat with us at the table. Hubby asked her if she’d had dessert and she said no. Then he asked if she wanted a cookie (we took a cookie plate there with us too). She picked up a sleigh and called it a butterfly. We all started giggling and turning the sleigh every which way to decide what all it could be. It was a butterfly, a sleigh, a bear, a playboy bunny, and a few others I can’t remember. Then hubby moved off to the Gingerbread man. We had Aunt Cheryl laughing so hard I thought she was going to start rolling on the floor. Probably something she really needed after the week she’d had.

And here’s Tbug. It was our Christmas to have her Christmas Eve through Christmas Day so she was able to come to hubby’s side of the family’s Christmas. 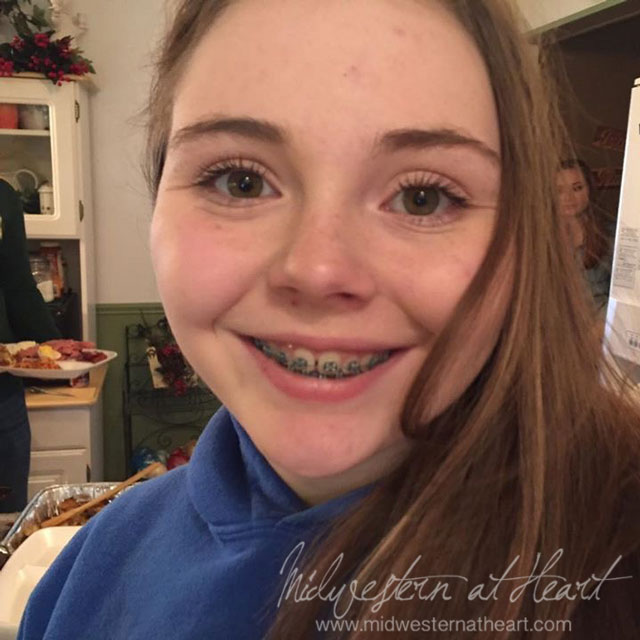 Ambyr came in and showed me this picture of Abug hugging EA so of course I wanted a copy. 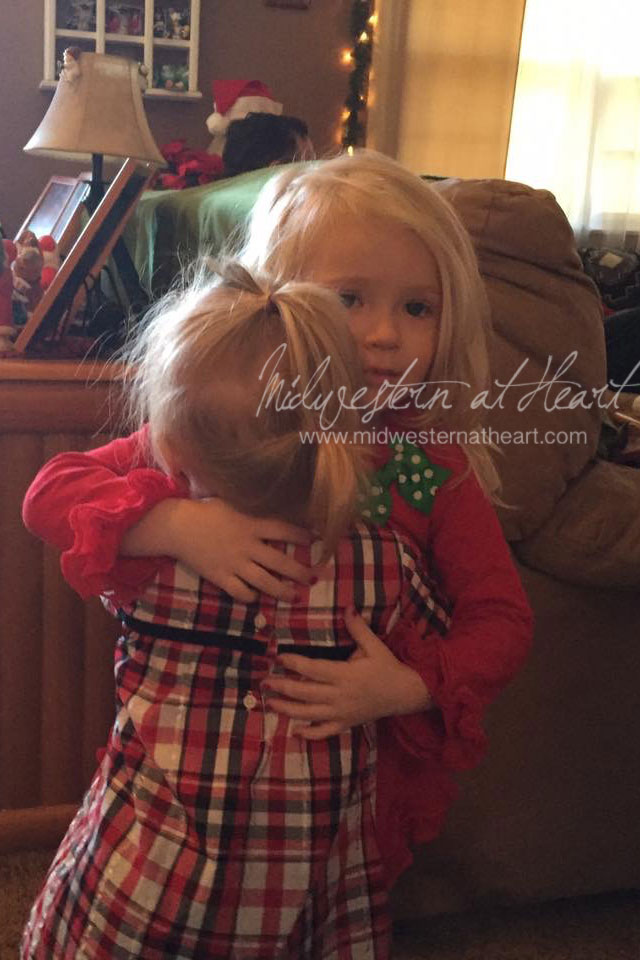 After we had our cookie fun, we all gathered in the main living room for present time. Abug made out like a bandit. 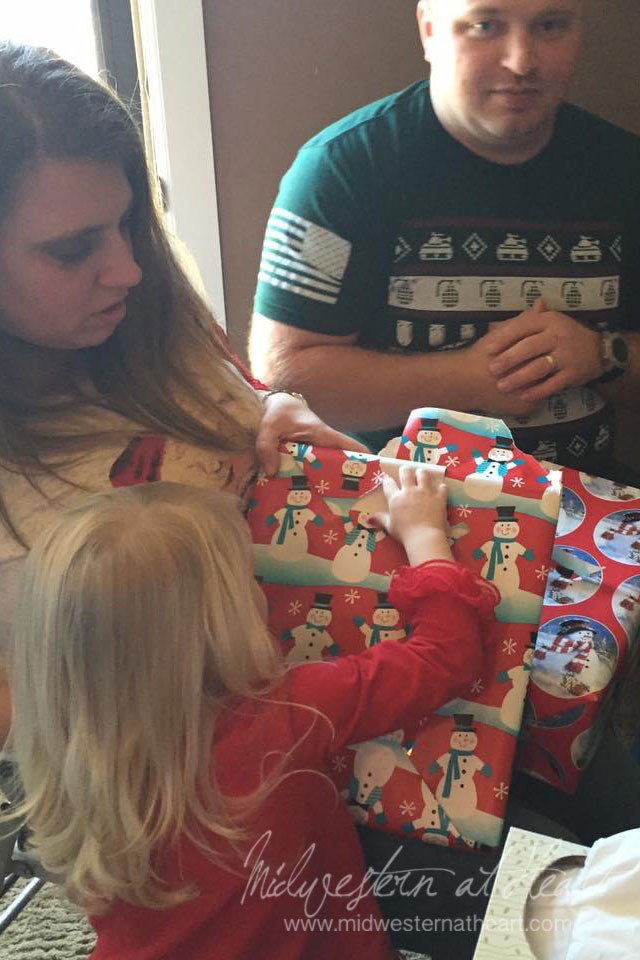 I’m not sure there are words. Okay, okay, the story… Abug needed this present moved out of her way to open other presents. I placed it up above my head so that it was out of her way and then we decided to see if I could balance it without holding on. Of course I can. I can also do that with a book and walk across the room wearing high heels. Just saying…. 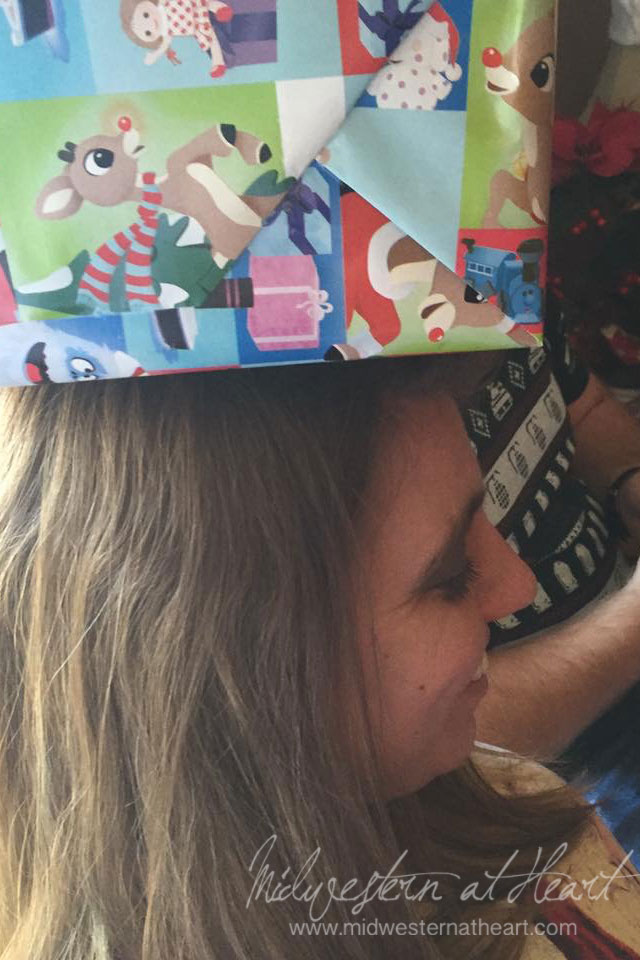 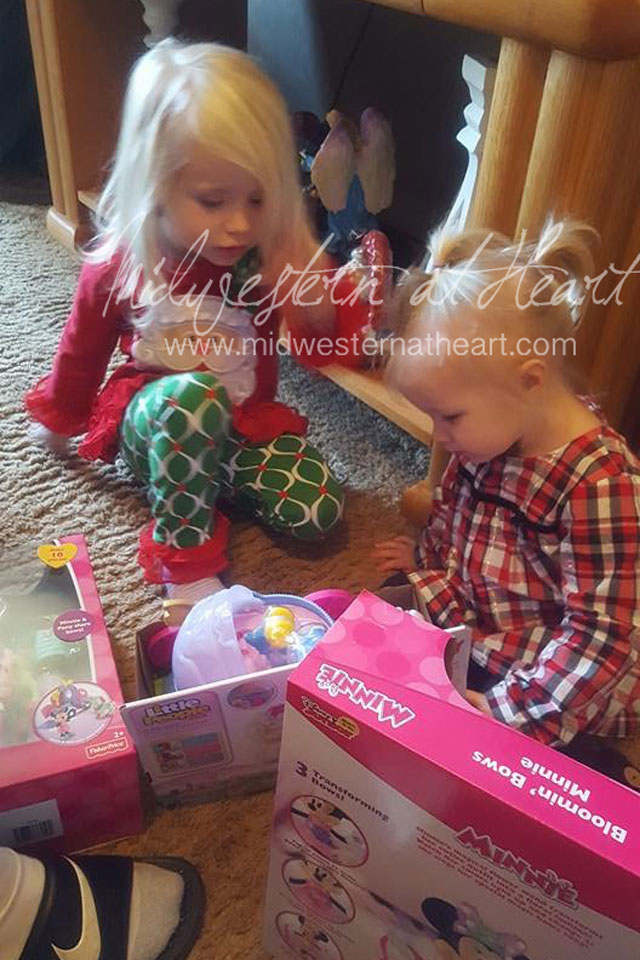 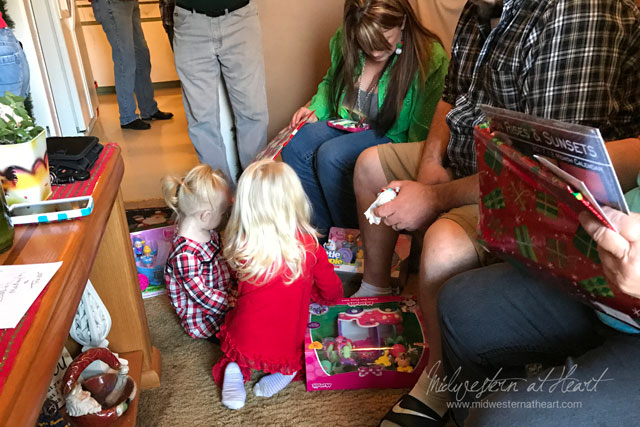 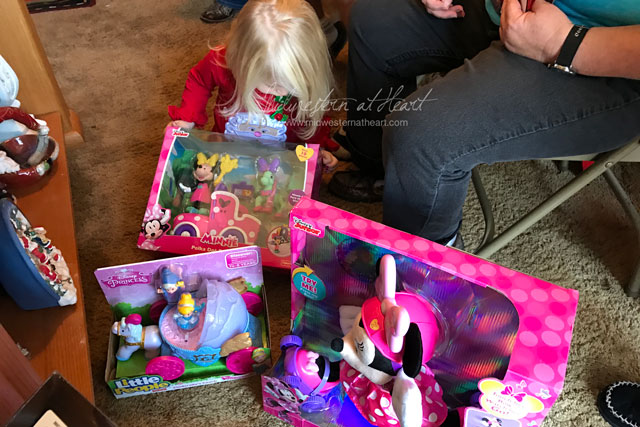 Now normally when Ambyr and hubby are together, one or the other of them wind up with icing of some sort on their face… but this year, this happened instead. I don’t know what was really going on other than they were talking to Grandma. 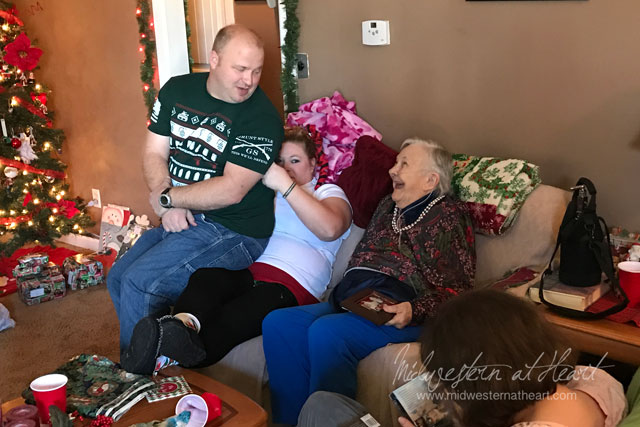 Then we worked on pictures of all the grandkids with Grandma. Sadly it feels like his aunt does everything to keep me out of family pictures and this year was no different. The way it happened, after we left, then they started in on the family pictures. Now that excluded hubby and the girls too, so it wasn’t just me. Oh well…. This makes the 3rd year. 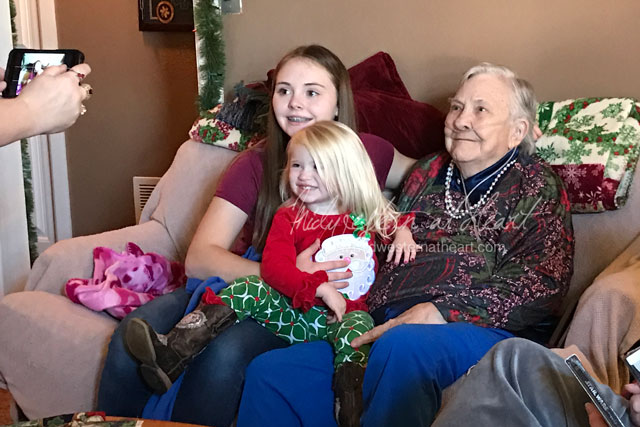 We had to leave though to go home and start working on food for that evening with my family. The girls both LOVE to help cook so they jumped in and started helping me (and each other). 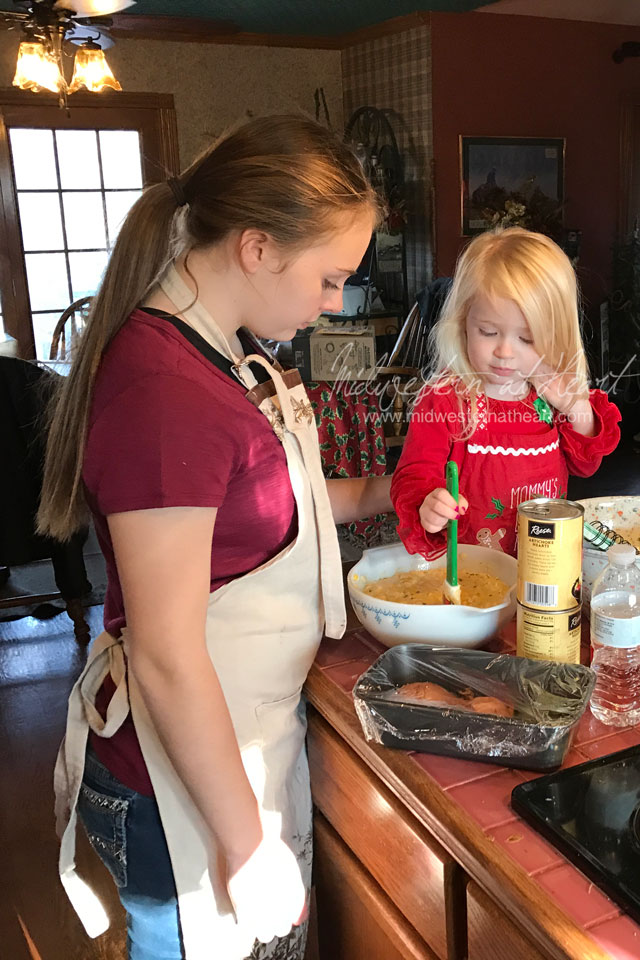 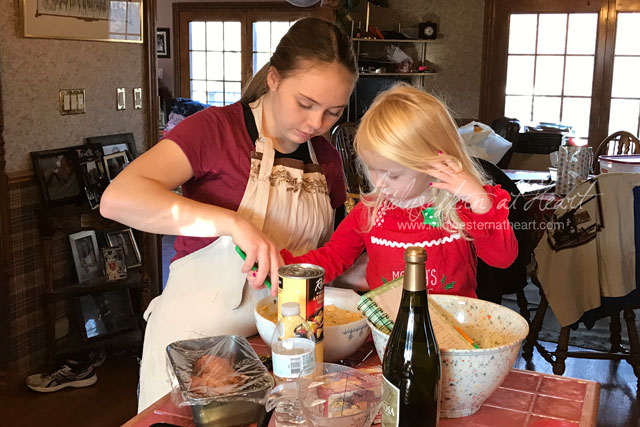 My grandma has needed a new recliner for years. This year we decided that was her Christmas present. When she arrived we all rudely took up every seat in the house so the only open spot was her new chair for her to sit in. We attached a piece of paper that said to Grandma from my parents and us. Then once she sat down, hubby asked how she liked the chair. When she said it was great, we were like good, it’s yours and pointed out the name tag on it. She was thrilled. 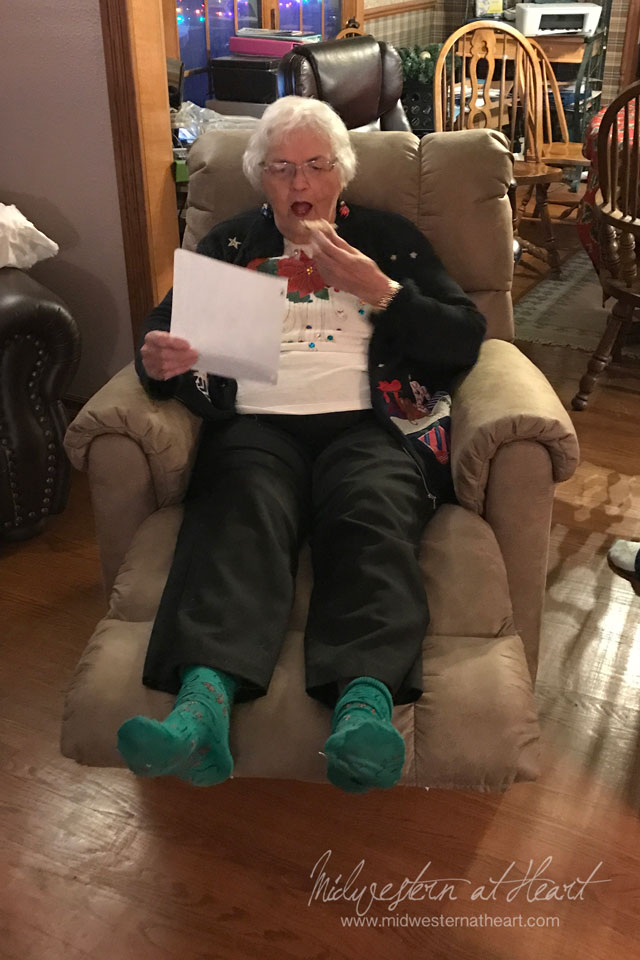 Abug with her little stash of presents. We thought she might have system overload like last year and throw a fit about opening presents, but she opened presents like a champ. Then after we had our presents opened and it was time for dinner, she chose to sit in the living room and play with all her new toys. No one objected. We figured when she was hungry she’d come to the kitchen and she did, about the time dessert was served 😂. 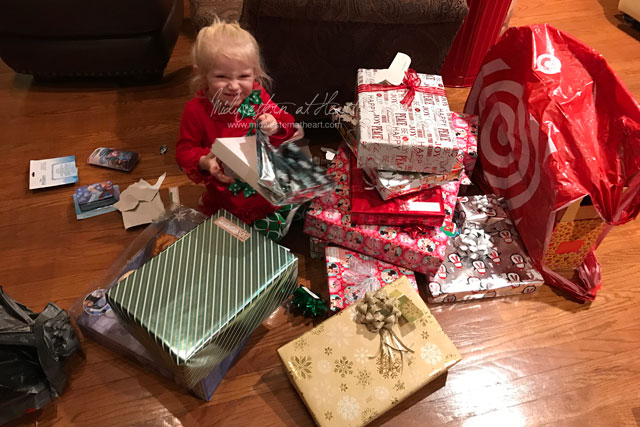 Apparently all the guys got some sort of “underwear” or pants. And they all at one point or another had a bow on their head. I love my family! 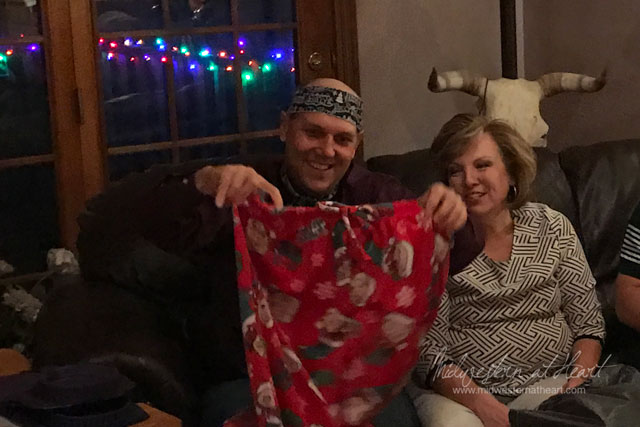 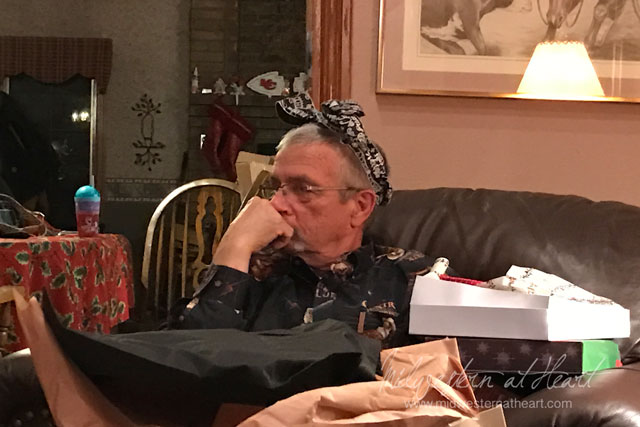 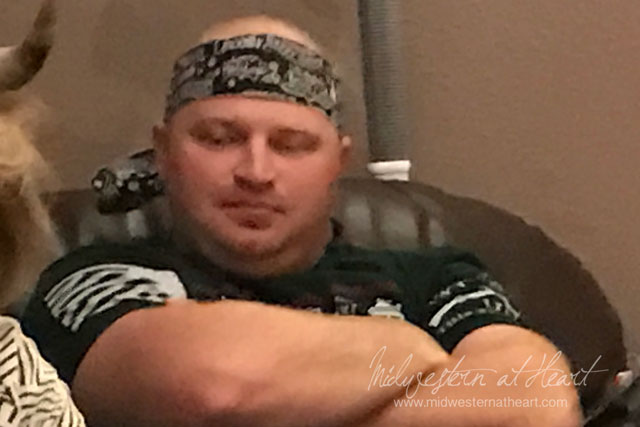 Hubby got a mini drone for Christmas from my dad. We’re talking mini. Those are K-cups behind it… yes it’s that small. Sounds like a fly. It’s kinda cute! 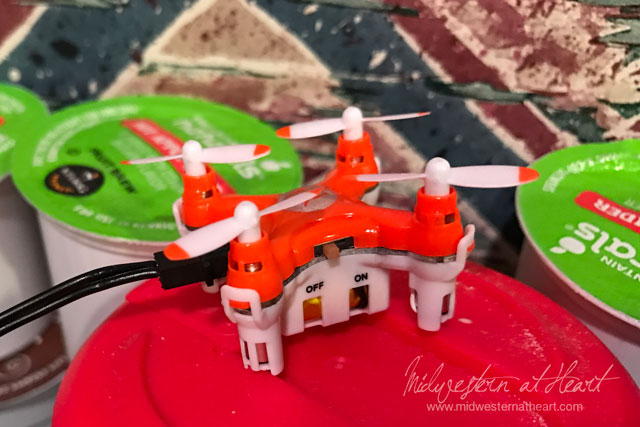 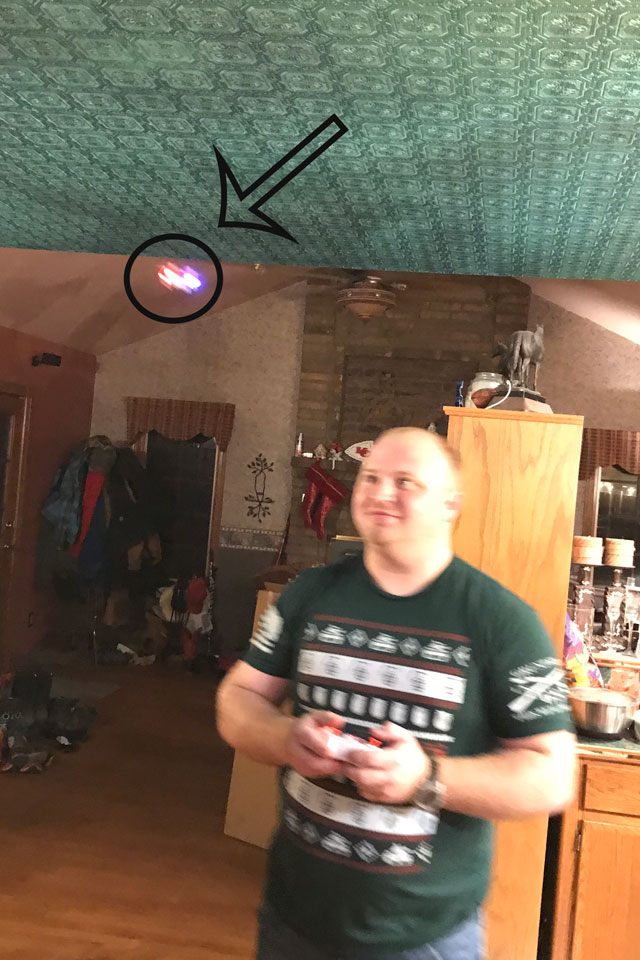 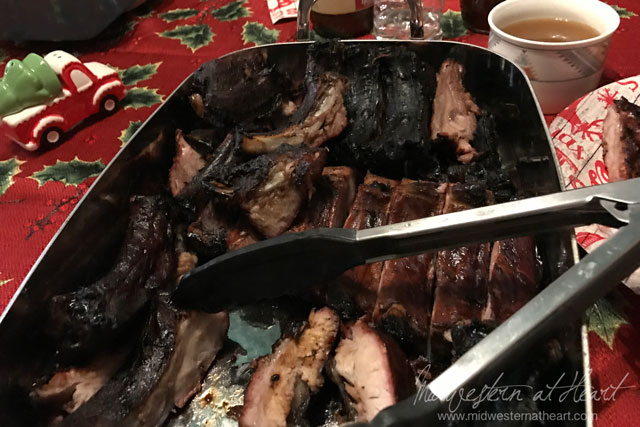 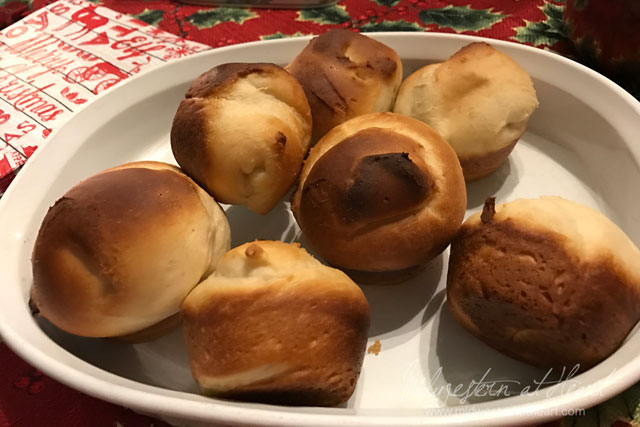 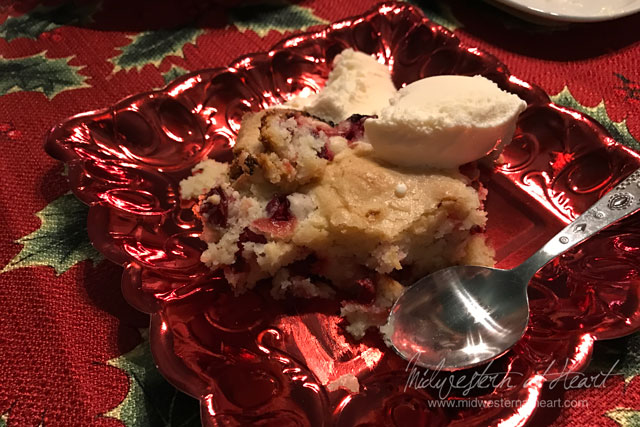 While Abug went up to shower and get ready for bed, she left grandma in charge of her new dolls. 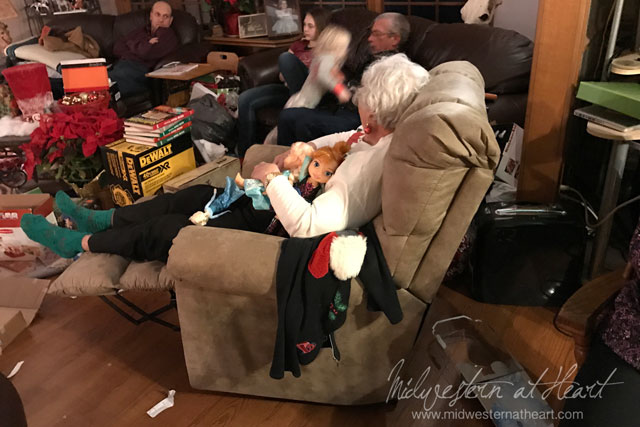 Then Abug wrote her letter to Santa, set out cookies and milk, and scampered off to bed to await Santa’s arrival overnight. 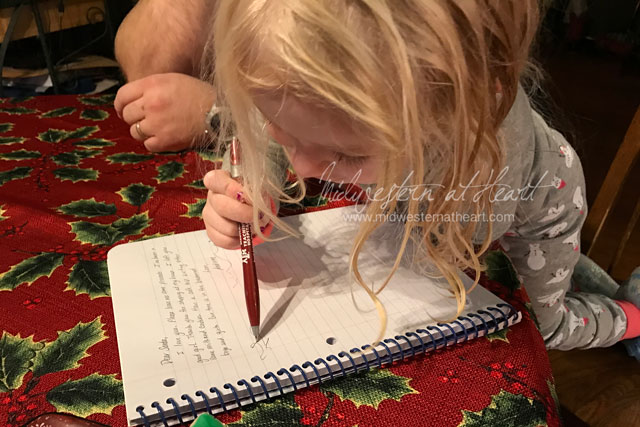